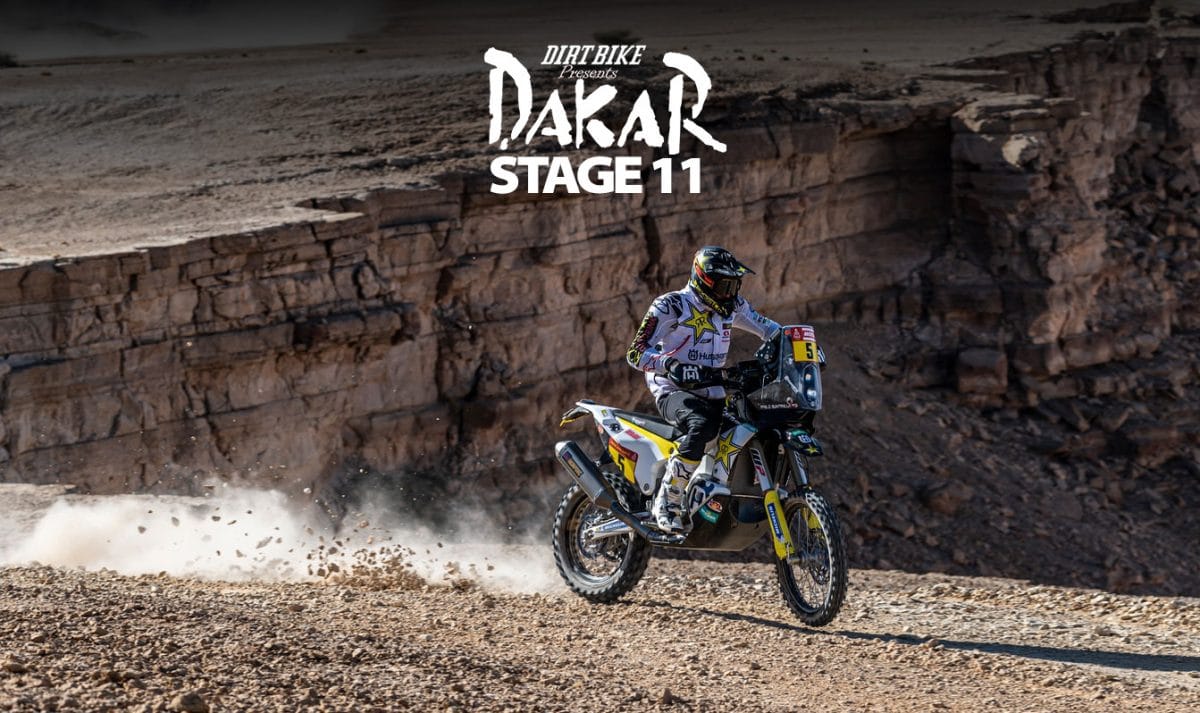 Rockstar Husqvarna’s Pablo Quintanilla won today’s stage 11 of the 2020 Dakar Rally after a battle with Red Bull KTM’s Matthias Walkner that came down to a 9-second gap. That was after 235 miles of racing and 227-miles of liaison in the second leg of the marathon stage, with riders returning to the bivouac in Haradh. The opening kilometers had a heavy dose of dunes before the stage finished with sandy track and some solid ground.

The Honda trio of Joan Barreda, Ricky Brabec and Kevin Benavides started up front and found it difficult to open the route in the initial sand section. After that, fuel conservation became an issue, and all three ended up surrendering moderate time to the KTM vs. Husqvarna battle for the stage win. Brabec’s lead is still comfortable going into the final stage.

Pablo Quintanilla: “Honestly, the stage was really tough today – all off-piste and very fast. I felt good and was able to push as hard as I could. Overall, I’m really happy with my race and to be in this position going into the final day. After difficult months I have had coming back from injury, it feels great to be here and second overall going into tomorrow. As always I will give my all and we’ll see what will happen.”

Ricky Brabec: “There’s one stage left. The team is working well. I’m pretty excited. I can’t get my hopes up right now. Stage 11 here in the dunes was pretty tough, starting up front due to the cancellation of the second part. So it was really hard to judge the time. Tomorrow there is one stage left and I’m in a good starting position. I’m confident to be focused and make it to the finish line.”

Andrew Short: “I’ve enjoyed today, we had some really nice varied terrain. To see all the different types of sand was cool, from white sand like you’d get on the beach to the really red sand like the Liwa dunes in Peru. I was riding OK, trying to manage my fuel because I knew that would be tight. I perhaps lost a little too much time on the guys in front but overall, with one stage left to go now, the goal is simply to get to the finish safely. I’m looking forward to tomorrow and getting to the end.”

Friday’s stage 12 – the last of the 2020 Dakar Rally – will see riders leave Haradh and head west to Qiddiya and the event’s checkered flag. Although relatively short, totaling 447 kilometers, the timed special of 374 kilometers will still pose a big challenge to competitors as they wrap up the event in Saudi Arabia. It will be followed by a circuit race designed for spectator appeal that will have no affect on the final standings.

THE WEEKLY FEED: FIRST RIDE KTM 500 XCF-W, ROESELER BACK IN THE DAY