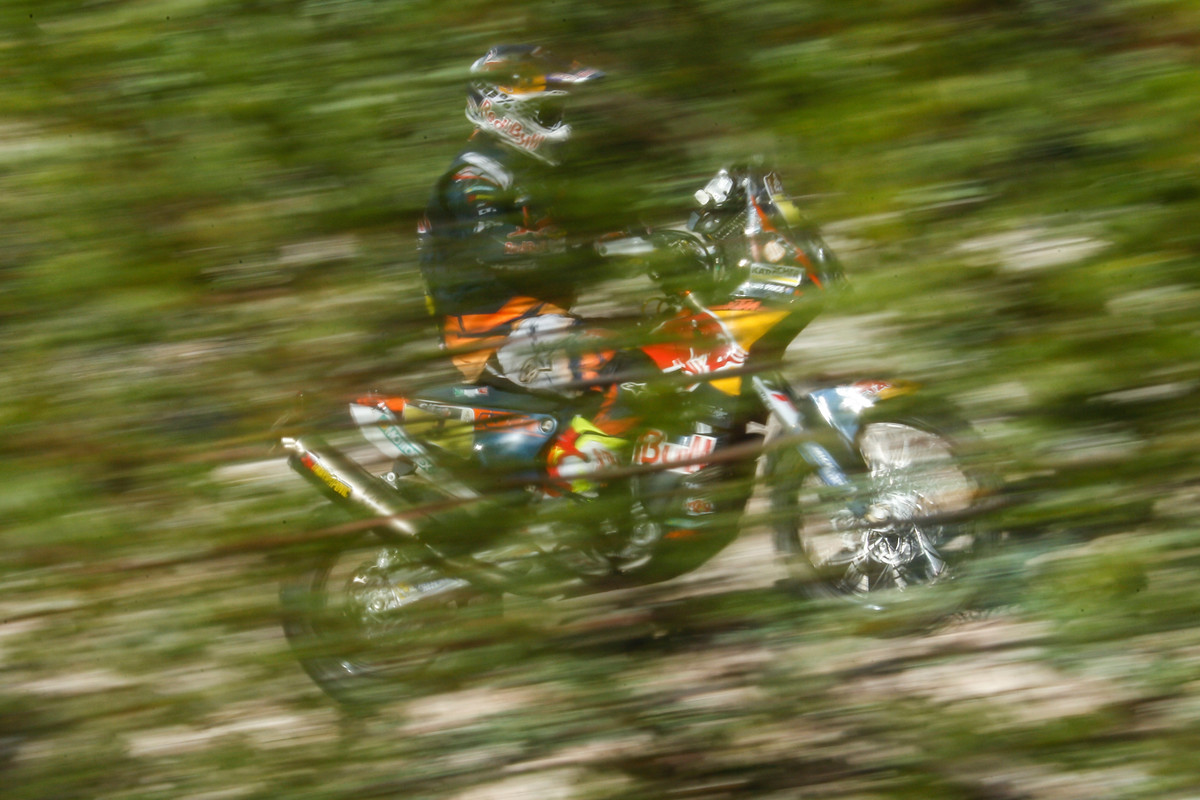 Red Bull KTM factory rider Antoine Meo of France on Thursday sealed his second stage win in the Dakar Rally to finish the eleventh stage just 18 seconds ahead of teammate and current overall leader, Australian Toby Price. Third on the day was Pablo Quintanilla. Riders now only have two stages to go to reach the finish in Rosario on Saturday but still have many kilometers left to put under their wheels.

Meo, on his debut Dakar ride for the team continues to impress with his performance and described his day as ‘incredible’, saying: “In the beginning I quite quickly caught up to Goncalves and after that I rode pretty well. At one moment I thought I had made a mistake in the navigation so I turned back, but in fact I was good. So Pablo (Quintanilla) caught up to me. After that I had a big crash because I didn’t see well in the dust, but after the refueling I was better in the navigation and it was really great. I made a gap to Pablo and after that I rode alone and it was good for me.” Meo is currently overall third in front of Quintanilla and a good battle is developing between the two riders. Asked if he thought a podium was possible, Meo took the cautious approach. “It’s difficult to say because tomorrow I need to open the track and it looks like it is going to be another crazy stage. But I’ll try my best and we will see.”

Paulo Gonçalves was forced to retire from the stage between La Rioja and San Juan today after a serious crash that led to the rider being airlifted to safety. It occurred 118 kilometres into the timed section. The Portuguese rider fell heavily, suffered concussion and had to be airlifted by helicopter to the hospital in San Juan. After a thorough medical check and scan, doctors determined that the blow had resulted in neither fractures nor any serious consequences. That means the top rider for the mighty HRC team is none other than American Ricky Brabec, who was 10 on the stage and eighth overall. But the two days remaining will be no cakewalk, and today’s stage was so brutal it was again cut short. “It has been tremendously hard and very hot. Horrible,” said Brabec. “In conditions like these, I think that the only thing that you can do is try to get to the end with out making any mistakes due to the speed. I’m happy about that even if I did lose a bit of time. But here I am, in one piece, so I have to be happy about that.”

Toby Price confirmed it had been a long stage. “It’s the third day from the end and it seems to be getting harder and harder, so they are definitely driving us into the ground at the moment. But yeah, it was a good day. We started off third and I caught the guys in front and then sat behind them a bit. They made a mistake and I got past them, but then so did I. I fixed it quite quickly but they had got past me so I just sat there for a while. Then they made another mistake and I was good to go and I rode all the way to the finish. We’ve built the overall lead a little bit more, so hopefully I can make the last two days a bit more comfortable. We’ve still got a lot to go so for sure it’s going to be a long one and very tiring.”

Asked how he planned to tackle the last two stages Price said: As long as we don’t lose 15 minutes in both these stages I think we will be fairly good. I’ve got to do it nice and smooth, look after the bike and make sure we rest up enough. Hopefully we’ll be in good shape,” he added. “We’re another day closer, but for sure, it’s been a hard one. I can’t smell victory yet, not yet. I won’t smell victory until I cross the finishing line on the last day.”

With Just 14 riders at the finish, organizers once again called a halt to the stage at CP2 after 243 km, citing “exceedingly difficult weather conditions caused by the extreme heat and the large number of riders in difficulty”. Leaders times were verified and remained unchanged, but some adjustment may be made for the other riders.

Alexander Smith was 37th today and sits in 38th overall.