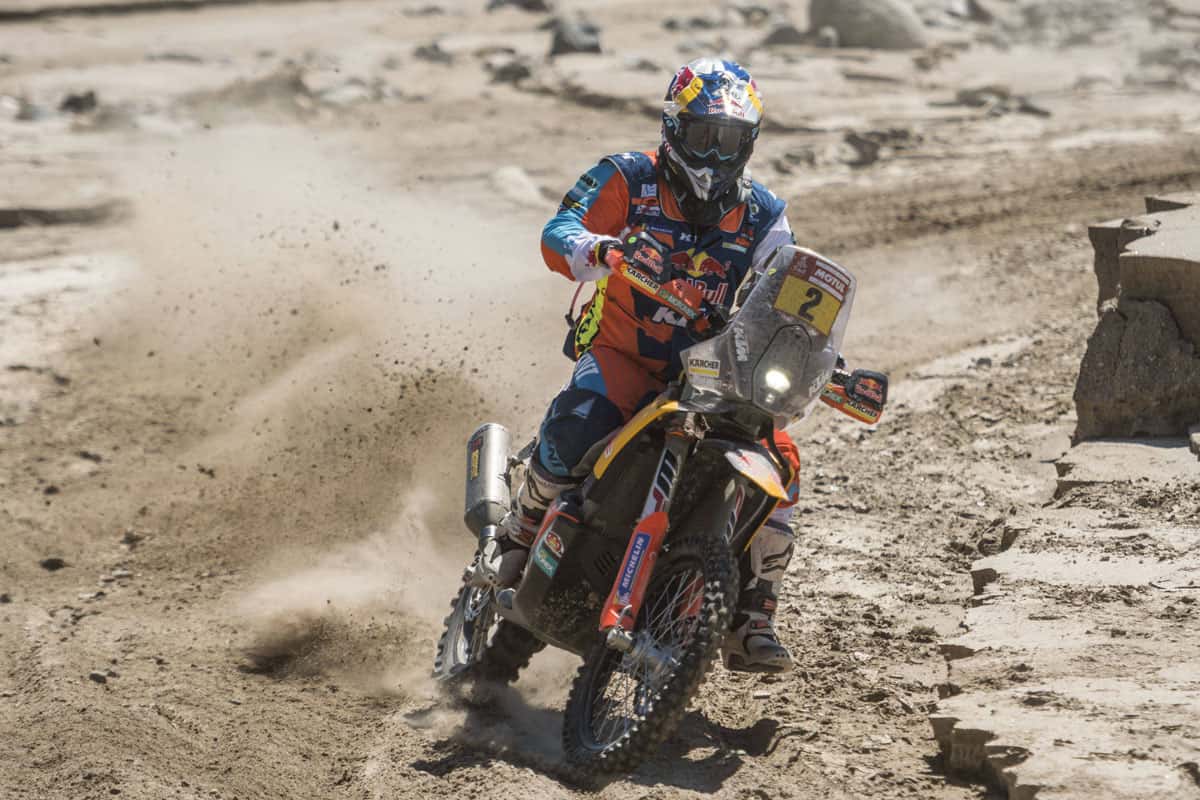 Today’s Stage 10 saw the 2018 Dakar Rally tackle Argentinian sand dunes and riverbeds between Salta and Belén. After several days in the rain, hot weather returned with temperatures above 40°C.

Stage 10 saw a big turmoil in the bike category, with Austrian Matthias Walkner taking advantage of the navigation error made by several rivals. That, and the then overall leader Adrien Van Beveren fell three kilometers from the finish, ruining his chances of victory and letting Walkner take the lead.

Walkner took the win in Belén after Antoine Meo, Toby Price, Ricky Brabec and Kevin Benavides got lost while following each other along the wrong track in the second part of the stage. When Van Beveren was forced to abandon after falling off his bike, Walkner prevailed – and became the new overall leader. Brabec’s navigation error put him in 24th overall. He still sits in seventh in the overall standings, but the goal of an overall win is slipping farther away, having lost 56 minutes to the leader today.

Walkner finished ahead of Pablo Quintanilla (+11’35’’) and Gerard Guell (+16’21’’) in the small Argentinian town. He has a 39-minute lead on Joan Barreda and 41 minutes on Benavides in the overall ranking. Walkner said: “A really tough and long stage. After the first part, when I saw Kevin was six minutes in front, I said ok, we can’t go as fast all stage with this tricky navigation. So I stayed at my pace and it did not work so bad. Of course I think I can win, but there are six or seven other riders who can win it and there is still a long way to go. We’ve seen how quick it can change”.

The top American was Andrew Short, who finished in sixth, his best of the rally so far. “It was an up and down stage for me but I am more than satisfied with the result. I was fast in some parts of the stage and then in others I had to slow down and pay more attention on my navigation. There were some parts of the stage that you couldn’t actually see where you were going. I rode by myself for the first part of the stage and that was a good practice for me. Then in the second part, I caught the leading riders who had got lost and I managed to stay with them. I just kept it pinned while trying not to make mistakes. I also had a big crash at one point, but luckily it was all good and I managed to get going again. I’m still really excited with the way things are going so far. I learn a lot and start to know how to be fast while also making sure I follow the right tracks.” Short’s performance put him inside the top 20, at 19th overall.

Mark Samuels finished in seventh, just seconds behind Short. He’s now in 28th  place, with Shane Esposito in 31st, after finishing 28th today. Bill Conger was 73rd on the day and sits in 69th.

The Weekly Feed: James Stewart- The master of air time!