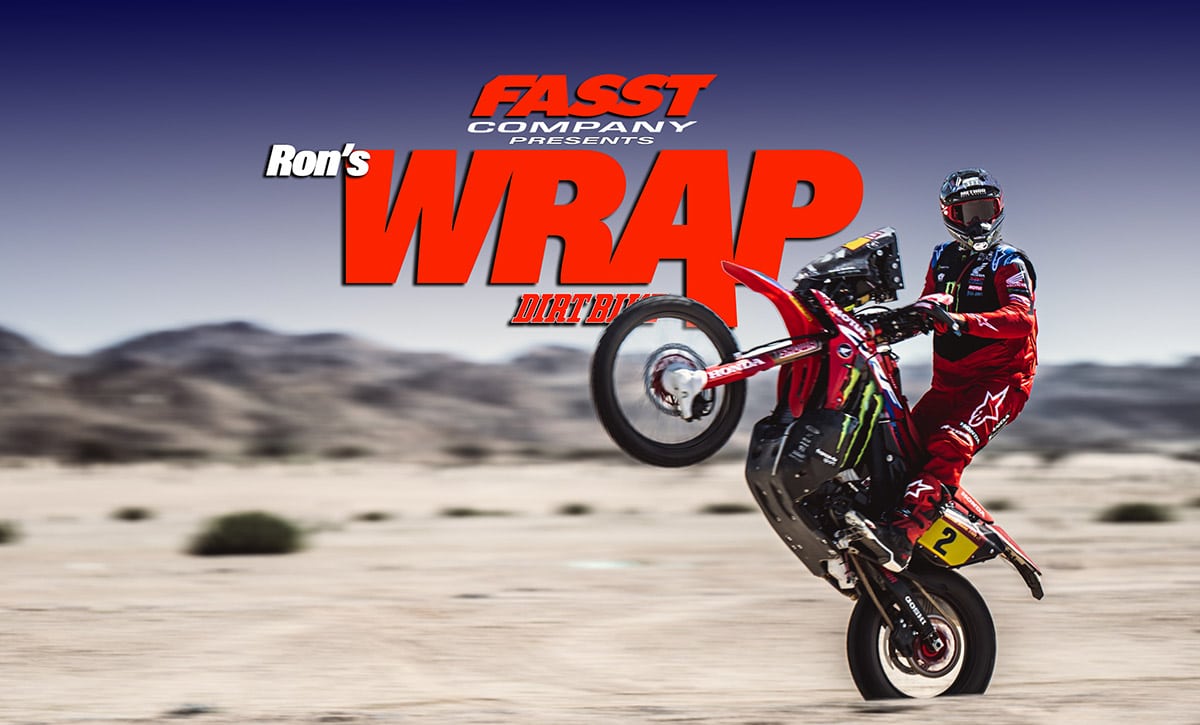 The 45th edition of the Dakar Rally starts tomorrow and Americans have become a serious threat to win. U.S. riders are also likely to have more riders in the top 10 than any other country. Ricky Brabec, Skyler Howes, Mason Klein and Jacob Argubright are the most high profile, but there are a total of 11 Americans this year. Kyle McCoy, Paul Neff, David Pearson, James Pearson and Morrison Hart joined forces on the American Rally Original team. All will compete in the “Original By Motul” class, formerly known as Malle Moto, where the riders receive little to no outside assistance.

The event will be held over 14 stages of racing with competitors covering a total distance of over 8500 kilometers along the way. Around 4700 of those kilometers will be raced against the clock in timed specials and single prologue qualifier. Following the first eight full stages, riders will enjoy a rest day in Riyadh before taking on the final six stages leading to the rally finish at Dammam on January 15. 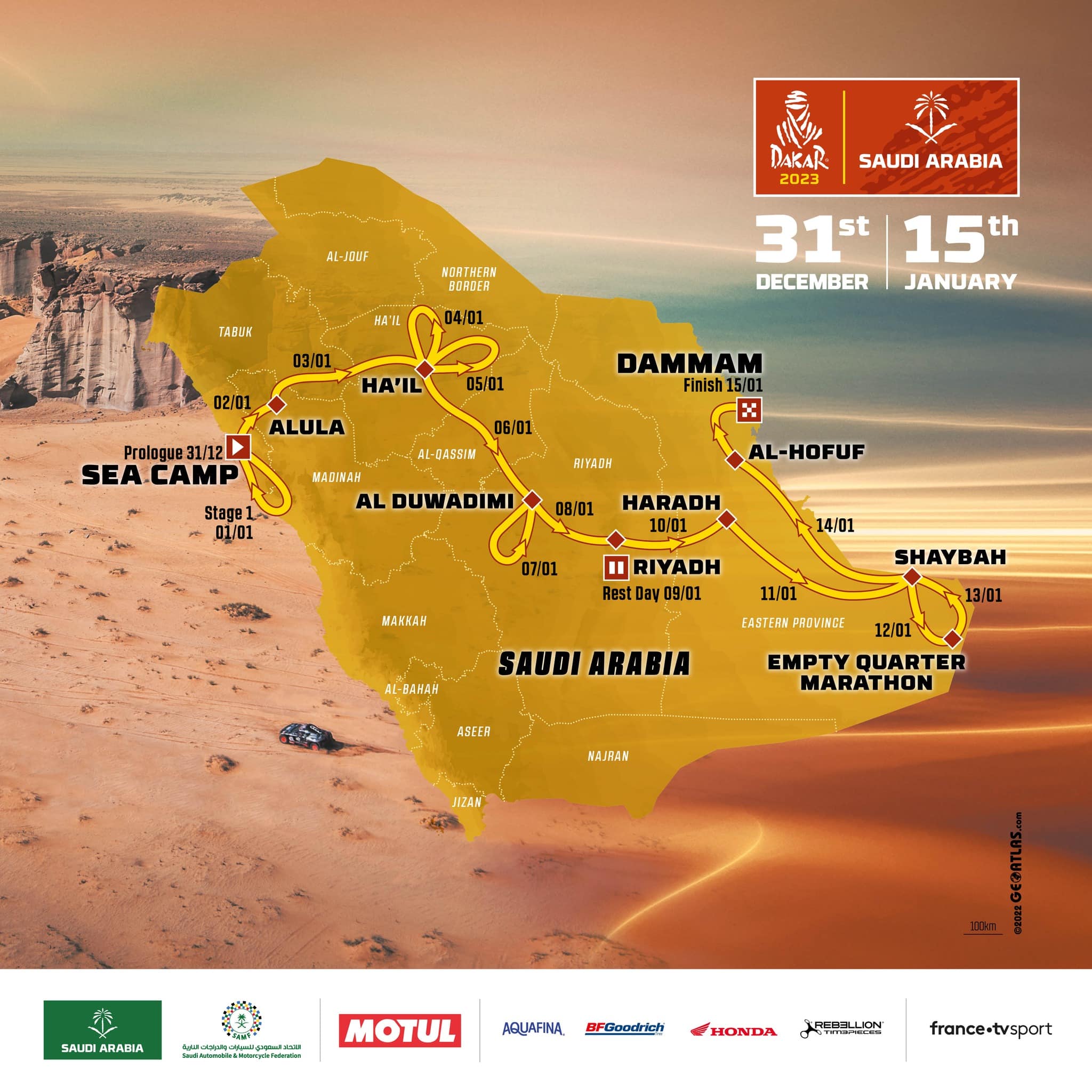 There are several significant rules changes for 2023. A system of time bonuses is now in place to reward the bikers who “open the road” on each stage. The bonus sections are in place during the first 200km of the timed special stage. It will be possible for a rider to have a total of five minutes deducted from their daily time if they lead the way throughout the opening 200km. It’s a huge prize to aim for, but also comes with a massive amount of risk – with no tracks to follow the chances of getting lost is bound to increase. 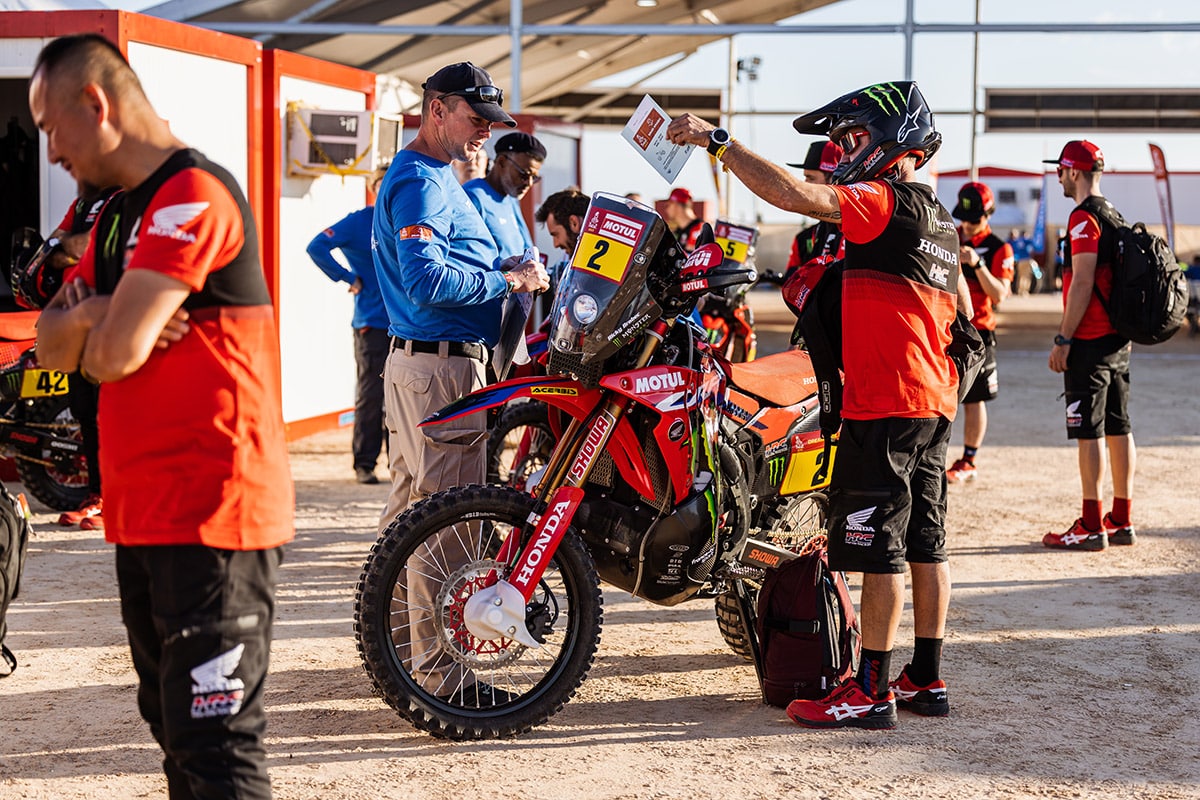 As a former winner of the rally, Ricky Brabec is probably feeling the most pressure of all the Americans. “The Dakar is not easy and if we could repeat my victory that would be legendary. After all these years I have learned that the Dakar is a way of life and experience definitely helps. I love the open deserts, that is where I grew up, so being back here in Saudi Arabia is really a great feeling ” 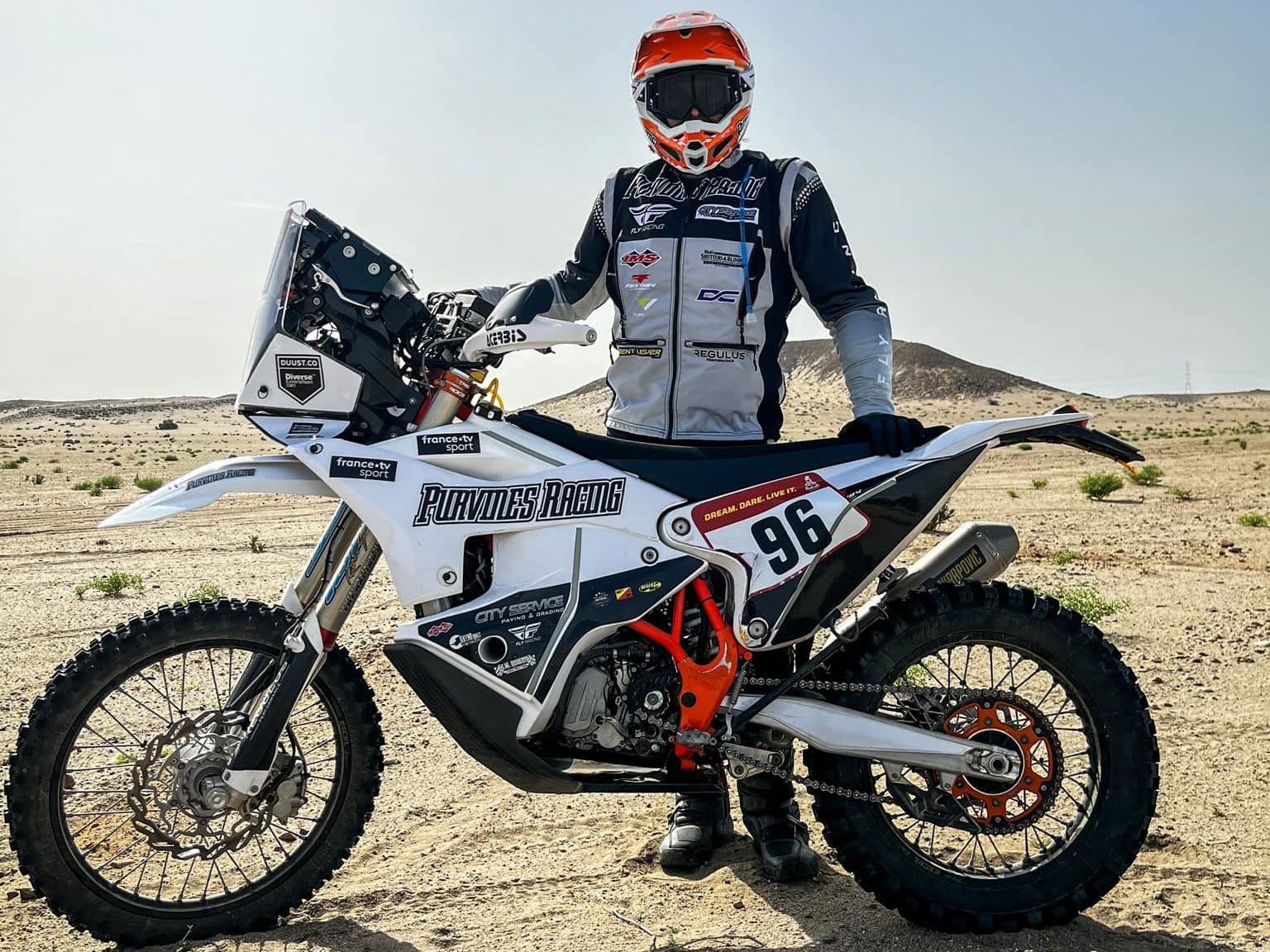 Jacob Argubright has put together his first Dakar effort with some help from a big family of Southern California supporters. See that “City Services Paving” logo”? That’s Nic Garvin’s family business. You can read Nic Garvin’s prerace interview with Jacob Argubright here. In a social media post today, Jacob said: “Feeling cute, might go race my first @dakarrally prologue tomorrow. Bike shake down went well today, it’s been a year since I’ve ridden a legit rally and @tbtracing was able to send some settings and parts with me to get dialed in. Just need to do administrative checks and we will be officially ready!” 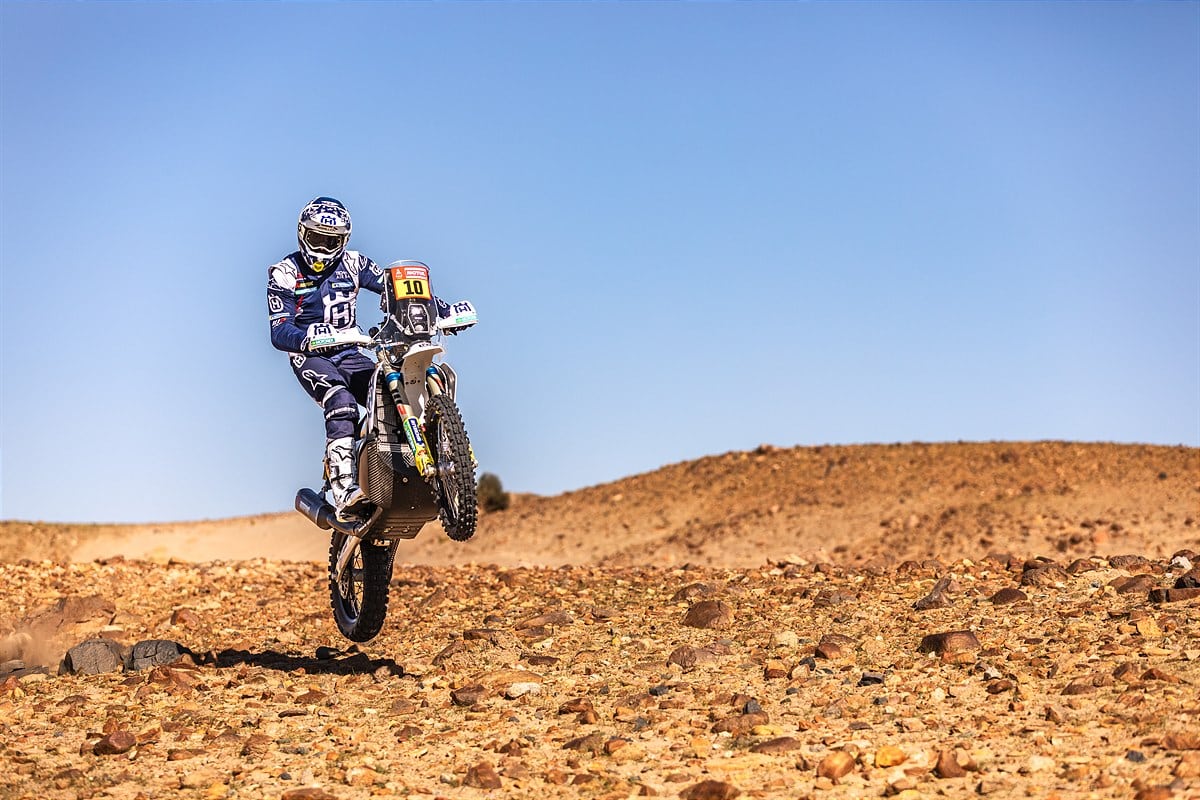 This will be the second Dakar for Skyler Howes as a member of the Rockstar Husqvarna Factory team. Last year ended badly with a crash and an injury, but prior to that, he was running up front.

Skyler Howes: “I’m really looking forward to beginning the 2023 Dakar Rally adventure that awaits us. I’m super excited to get started actually, this year I feel a lot more relaxed than at previous Dakars, and that is great for my confidence. Of course, there is still a lot of riding and racing that faces us over the next two weeks or so, and it’s definitely going to be a tough Dakar. But it’s these longer, more challenging events that seem to suit my riding and my mindset. There are going to be a lot of changes this year with new the rules and that means different strategies, but I think it’s good. It’s always tricky when they bring in these rule changes, but we’re all in the same boat here and we’ll have to figure it out as best we can. At the end of the day, all I can do is my best, and that’s what I plan to do – have a cool, fun time racing my Husqvarna through Saudi Arabia.”

After a stunning performance last year when he won the Rally Two class and finished 9th overall, 21 year-old Mason Klein finds himself promoted to the elite Rally GP class. “I feel like I’m kind of a nerd in school,” Klein said to a local paper. “So, maybe I kind of struggle in the fast sections. But something they’re doing this year, which they’ve done before, is they’ve added a speed limit. So, obviously, it’s not just about speed anymore. If you make a mistake, it’s way harder to make up time now.”

Aussie Toby Price is a two-time winner of the Dakar rally. You would think that would make him the star of the Red Bull KTM Factory team. As it turns out, he has two teammates who are also former winners. One is Matthias Walkner, who is the Austrian-born darling of the KTM team, and the other is Kevin Benevidez, who won the 2021 rally for the Monster Energy HRC Honda team. Toby is one of the growing number of international rally stars who has been training in America.  Toby has been recovering from injury lately, but that’s nothing unusual for him. He earned his last Dakar victory with a broken arm.

Toby Price: “I’m really looking forward to getting the 2023 Dakar underway. 2022 wasn’t so kind to me – I had good pace, but after losing so much time really early on, it was a tall ask to claw that back. If anything, that only motivates me even more for this year, so I can’t wait for the race to kick off and we can get stuck in. The usual goal is possibly even more important than ever with the event being so long this year – stay smooth, consistent, and be there right at the end. All in all, it’s going to be a tough one, but let’s make sure it’s a good one!”