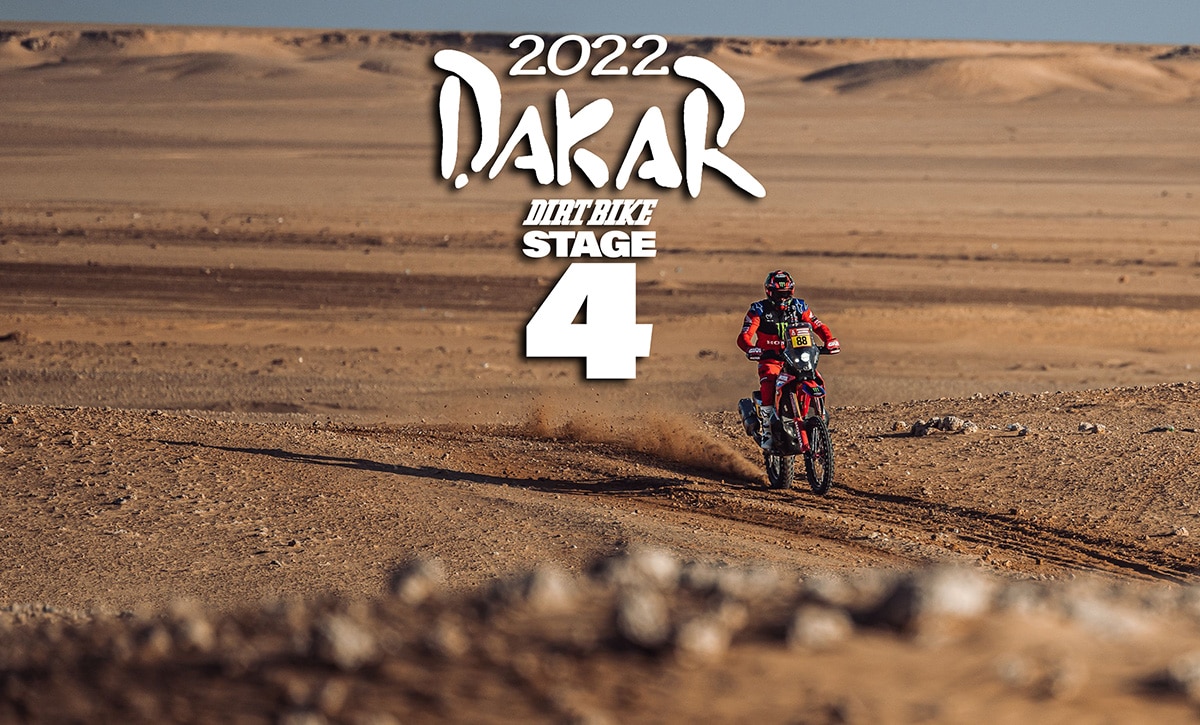 Monster Energy Honda’s Joan Barreda arrived with today’s best time at the finish in Riyadh. It was a 465-kilometer special – the longest of the Dakar Rally. His teammate Pablo Quintanilla earned the runner-up spot. It was a mixed day for the Americans. Ricky Brabec, who started sixth this morning in Al Qaisumah, had a fairly good day. But Brabec also received a two-minute penalty for speeding in a controlled area. That placed him 10th on the day and 17th overall. Andrew Short had a cautious day to finish 13th and move up to 12th overall. Skyler Howes finished 21st. Although he dropped four places in the standings, Skyler still sits in eighth overall heading into stage five. Rookie Mason Klein suffered the fate that often befalls a rider after finishing well the previous day. He started third and had to open the course for much of the day and finished 23rd. He now sits in 14th.

Joan Barreda: “I’m very happy with today. It was a very good stage and I achieved another win. We did a very good job from the first moment of the special. We had different terrains: sandy tracks, dunes, rocks and with some navigation. I tried to keep calm, follow our course, but pushing hard and I think we did a great job and I’m very satisfied and happy with it.”

Ricky Brabec: “Today’s stage was good. It was the longest stage of the rally and was supposed to be the most difficult, but as it was the longest it was good to make up or lose a lot of time. Today was a good day for us. We did well. We caught the front group around the second refueling, so there we rode as a group together. I did a good job. I didn’t lose too much time. I lost some time to my team-mate Joan who was wild. He was on the gas and him and Pablo are doing great. If we were to delete the first day, I think that the team would be sitting one-two-three. It’s rally things, like this happen. I suffered a speeding penalty today – my mistake. I sped into the speed zone a little bit late. I lost huge on the first day and I’m kicking myself. It’s a long race and we have many days left.”

Andrew Short: “Today was a good day. Starting up front and knowing it was the longest stage, it was going to be tough. It actually turned out pretty decent though. Brabec caught me and then we navigated together for almost the whole stage, which actually worked out really well as overall I didn’t lose too much time. I feel like I managed the day really well and I’m happy with things so far. Obviously, it’s a real shame about day one, that really set me back, but if I can keep on riding like I did today then we can for sure move up the leaderboard as the rally continues.”

Skyler Howes: “Things went well for me today, and I’m pleased with how I rode the stage. After yesterday’s decent result, I started right near the front and the navigation was just tricky enough that we soon ended up in a group riding together. We all took it in turns to open and it meant although we didn’t make up too much time on those around us, we didn’t lose that much time to those behind. I made it to the finish line without having to correct too many mistakes, so I’m happy with that. I lost a bit of time, but that’s understandable, so I’ll regroup and push some more tomorrow.”

THE WEEKLY FEED: JOHN HATELEY ON A 501 MAICO • DAKAR VIDEO RECAPS • WHEELIE INTO A NEW YEAR!