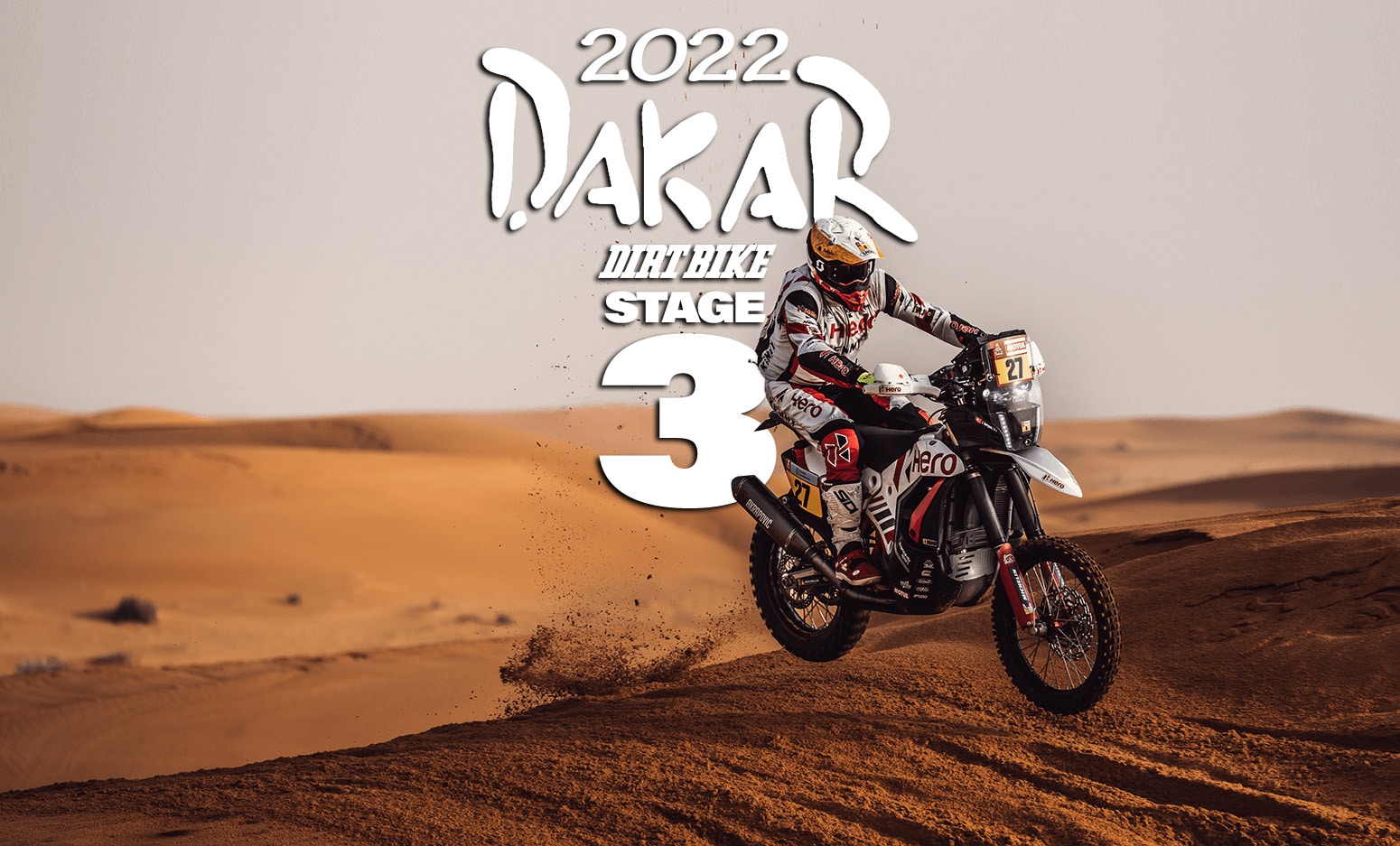 Today’s third stage played out over an unscheduled loop in Al-Qaisumah on an altered route, shortened to a 255-kilometer special and a 380-kilometer link section. There were 214 kilometers of liaison to be tackled on this chilly morning, with temperatures below 10°C, before reaching the start of the day’s timed special. The stage was raced over fast sandy tracks, some type two dune ridges and some twelve kilometers of off-piste tracks.

The top U.S. rider today was a welcome surprise. Privateer Mason Klein, in his first Dakar, rode to third place finish on a rented Bas KTM. Mason graduated high-school in 2020 and at 20 years old, he is the youngest rider to start the Dakar Rally. “Epic day in the dunes with Xavier de Soultrait and Daniel Nosiglia . Every time you lift the throttle you lose at least 1 second. Skyler Howes told me this.”

The winner of the stage was a surprise, as well. Joaquim Rodrigues of the Hero Motorsports team started from sixth position and rode flawlessly. It was also a good day for the American Factory guys, with Skyler Howes finishing third, Andrews Short fifth and Ricky Brabec sixth.

Joaquim Rodrigues: “I’m extremely happy with how my day has turned out. Even though the stage was really fast, with a lot of difficulty around alternating dunes and tracks, I was able to push hard right from the very first kilometer. The Hero Rally 450 has been performing extremely well, and I’m happy that our great combination has helped bring home the first stage win at the Dakar. Thank you, Hero MotoSports, for all the effort they have invested in me, and for putting me through a large number of races this year – this has definitely boosted my confidence by leaps and bounds.”

Skyler Howes: “Today was really fun – fast like yesterday with plenty of tracks and some technical dunes. I started off fourth and stayed there till around kilometer 250 where there was a tricky-to-find waypoint and I managed to catch up with the three in front. From there to the finish I opened the whole way, which was really fun and good experience. I did ok on my navigation today, not perfect but it all went smoothly, and I was able to stay at a good pace even from the front. Fourth on the stage is really encouraging, so I’m stoked and already looking forward to tomorrow.”

Andrew Short: “Rode smooth and consistent today hoping to be a little further back in the results for the start tomorrow. Stage 4 is the longest special of the rally and supposedly difficult navigation which will help if you start further back. 6th isn’t the best but it could be worse! Going to be a long race. Congrats to Mason Klein who is a young kid from the US. Impressive speed for his rookie debut here at Dakar.”

“Ricky Brabec: “I don’t think I had a difficult day today, I didn’t really make any mistakes. It was a very cold day. I started quite far back and for me it was like a motocross track, no navigation. I had a lot of lines to follow. The hardest part was riding in the wet sand with the big ruts that had been made by the bikes that had gone out in front. It was a very fast stage. We started to get into the sand dunes and it was a physical day. It’s only the second day… let’s hope we have energy at the end of the rally! We will keep pushing for the next few days because we are really far behind. Yesterday 90% of the competitors got lost with some notes that didn’t make sense and today I had another problem like that. The Dakar is tough.”