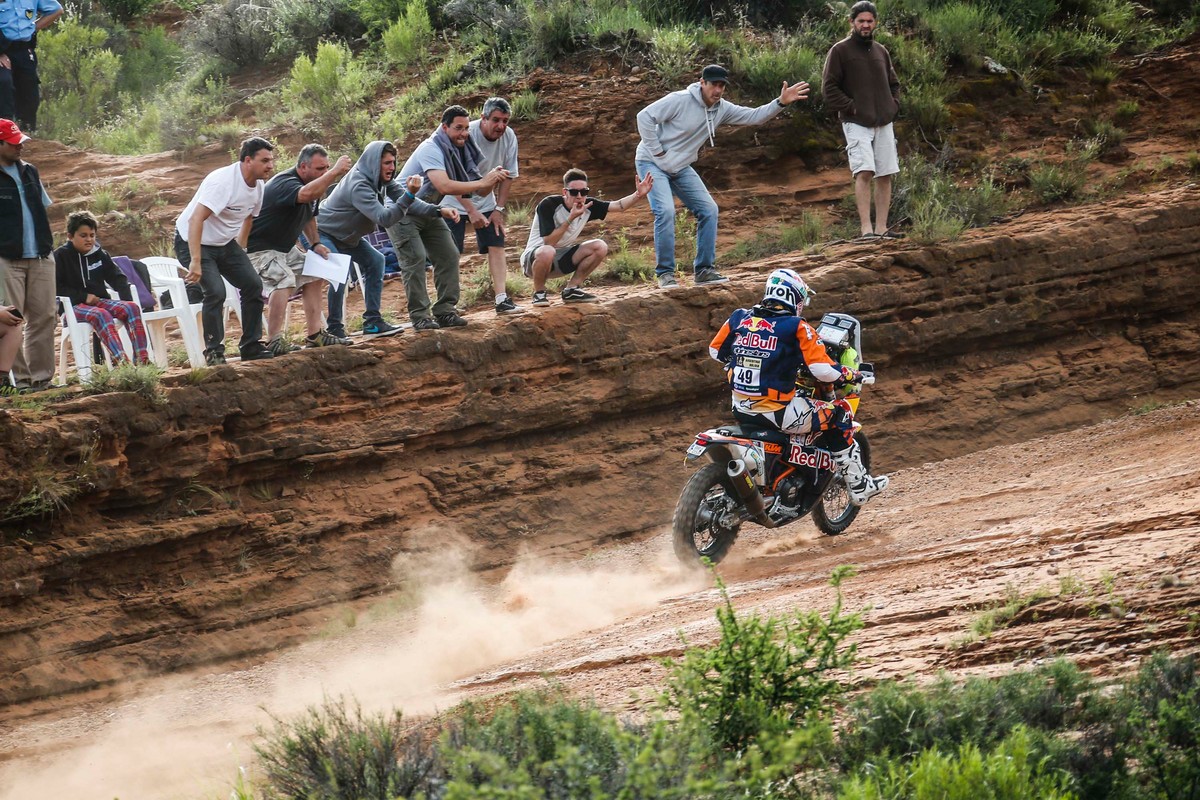 World Enduro Champion Antoine Meo justified his place on the Red Bull KTM Rally team with a stage win prior to the rest day. “The first part was real tough, we couldn’t see the terrain properly because of the sun glare. I really enjoyed the ride after the neutralised sector, I caught two riders and, because it was moist, there wasn’t any dust… Awesome. I rode fast, I made no mistakes, and I navigated properly towards the end. I felt much better than yesterday, so I attacked a bit. I’m happy. I’m discovering the Dakar, it’s still hard to judge. I wanted to be in the top 10 and, so far, it’s even better. I try to be consistent and not to get too tired. I’ll do my best to keep it up. I feel okay physically, but I know we’ve still got to tackle the toughest week. I’ll stay relaxed and we’ll see.”

Paulo Goncalves continues to lead the overall standings for HRC Honda after finishing third on the stage behind Meo and Kevin Benavides, who rides on the separate South American Honda Rally Team. “At the start of the special, I stopped to help Matthias Walkner, who had taken a tumble, and I stayed with him until Pablo Quintanilla got there,” said Goncalves. “The first part of the stage featured some navigation, but then the profile was a bit like two days ago, with lots of ríos. In the second special, after the neutralized sector, it was raining cats and dogs, I was almost scared, it was almost snow. The weather cleared up a bit towards the end. I’m rather pleased with today’s stage, and even this week. If I can repeat this in the second weeks, I’ll certainly be very pleased, but I think the stages will be very different, so we’ll see.”

Goncalves was given back 11 minutes by race officials to encourage such behavior. Walkner’s rally ended with a broken leg. The HRC Honda team took a major blow of it own when premier rider Joan Barreda failed to start in the morning. But its other riders are still intact, including American Ricky Brabec. “The first stage was good I came across some riders helping out Walkner who had crashed and broken his leg. When I see that stuff I take it easy because I don’t want that to happen to me. Other than that the stage was very good and fast. It was the same stage as two days ago so we remembered a lot of the stuff. The second stage getting cancelled was a disappointment. It was raining quite hard on us but it was still fun.”