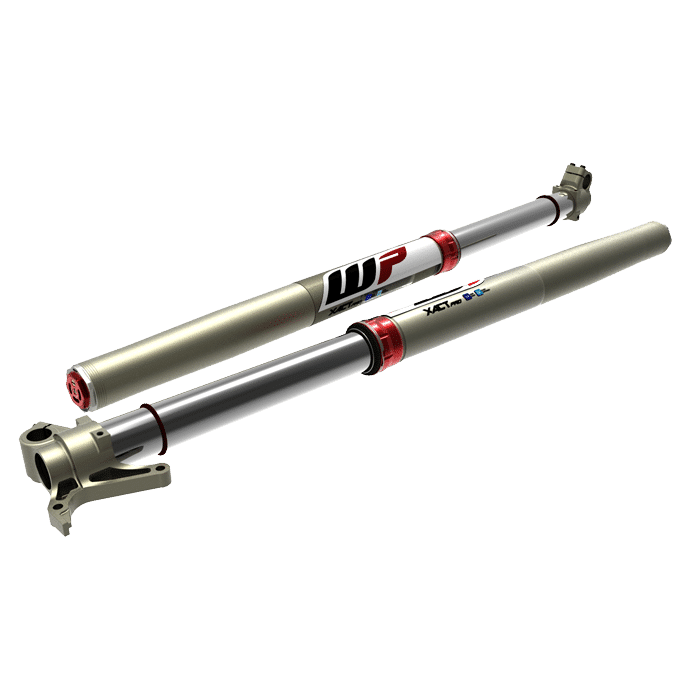 This is one of those stories that the average Joe dreams about. We’ve been hearing for decades about the value of factory-level suspension, but in the case of factory motocross suspension, the works Showa and KYB units that have graced the stars’ machines are virtually unattainable. The cost is as high as $20,000 and up just for the fork. These units are hand-built and never leave the factory teams’ sanctuary.

WP, the suspension manufacturer that supplies dampers for KTM and Husqvarna, has a factory services department that sells Pro Components suspension to anyone for both street and dirt, including off-road, motocross and adventure. A few months back, we were talking to Kyle Redmond about the lure of the Cone Valve fork and Trax shock that Colton Haaker and Cody Webb run on their factory off-road machines. Kyle said that he rode Colton’s bike, and the fork was so good that it took a level playing field and slanted it radically in his favor. “How?” we asked. He said he could hit things harder and faster with dramatically improved control, and that the overall handling of the machine was balanced and firm with just enough cushion to give the rider extra confidence.

The WP Cone Valve fork sells for $4250, and the WP Trax shock sells for $2550. A hefty sum no doubt, but it’s not in the new-truck price zone; it’s more in the used-bike arena. Knowing that riders in the off-road world who are dominating all aspects of Hard Enduro, GNCC, EnduroCross and WORCS racing all race with suspension that can be purchased got us thinking: would it work for the more pedestrian needs of a guy who loves riding but is getting long in the tooth, thicker at the waist and sits more than stands?

INSIDE THE CONE VALVE FORK AND TRAX SHOCK
The Cone Valve fork is a very high-end system that uses quality components and a unique “cone valve” mid-valve to control compression damping. This cup-and-cone system is different from the shim system used in nearly every fork on current dirt bikes. The cone meets the ports of the rebound piston and is backed by a coil spring. This allows for variable orifice functions. The design has advantages over the normal shim-stack mid-valve. It reduces turbulence and cavitation, since there are no sharp edges or abrupt corners in the path of the fluid flow. It allows for infinite tuning via three different cones and various mid-valve springs. The highest-quality materials, super-tight tolerances and high-end coatings equate to less friction.
Like the Cone Valve fork, the Trax shock uses very high-end materials with super-tight tolerances. It has dual-compression controls (separate high- and low-speed circuits), a normal rebound adjuster (knob on the shock bottom) and the Trax system, which is a unique system that reacts to successive bumps or chatter when the rear tire leaves the ground. The Trax system opens up and gets the rear tire back to the ground. It uses a conventionally wound spring, special coatings and tends to ride higher in the stroke.

GOING TESTING
We got to spend the initial test day with the WP boys at Cahuilla Creek. We set up a six-mile test loop that was tight, technical and had a decent smattering of rocks and some good hack zones. Our first loops were on our KTM 300XC-W with Kreft-modified suspension. The Kreft dampers made a monumental difference in the 300’s off-road appetite. Then the WP techs bolted on a brand-new Cone Valve Xplor Pro fork and a Trax Xplor Pro shock.
Halfway through the test loop, the words “immediate gratification” came to mind. We have tested thousands of suspension mods over the years and usually come away either confused or unhappy. The WP Pro Components proved to be wildly different from what we expected. They ride really high in the stroke, especially the rear. The fork was just plush enough to take away most of the hack, but, more important, it removed any wallowing, craved hitting any obstacle with substantial control and gave the front end a huge amount of feel. It was stiff but still took the edge off trail litter that would normally offend the off-roader. The most dramatic improvement was in control. It likes you to attack the terrain and rewards you with balance and the ability to manage impacts, which gives you a sense of security.

Out back, the Trax shock was set with 112mm of sag with the rider aboard. Initially, we thought there was something wrong with the rebound circuit. It rode really high in the stroke and felt a little tense (almost over preloaded). But, we came to realize that the bike rode higher both fore and aft, giving the rider the impression that he had more suspension to deal with obstacles and dramatically improving traction. It cornered better. The front end went where you focused, and the rear end responded, reacted, tracked and made the machine feel planted.
Over the next six hours we tested three forks with different spring rates and damping, along with three shock combinations. Each alteration was subtle, but the results were dramatic. In one combo, a stiffer shock setup made the fork feel harsh; another fork was softer but felt harsh. The WP techs were amazing. They made the most changes to the rebound settings. They said that most riders focus too much on softening the fork’s compression, and this undermines the machine’s balance and feel.

PACKING ON SOME MILES
Over the last month we have ridden some 500 miles with the WP Pro Components. The majority of our testing has been in our high-desert Disneyland that morphs from sandy washes to rocky climbs and good woods sections with huge hills. Each time we took another 300 TPI machine equipped with similar engine updates and the superb Kreft suspension mods along for comparison. Our Cone Valve machine is brutally efficient and loves abuse. It rewards the rider with incredible control. The riding-high sensation improved cornering, and our hill-climbing ability was enhanced. It was not as plush as the Kreft suspension, but the overall gait of the machine was far more planted, and we had better control in rough terrain at speed. One interesting note is that the WP techs turned off the Trax shock’s drop feature. They believe that on the PDS machine it works better closed off.

Our final test was riding the Nevada 200. This is an eclectic ride, where the terrain shifts from thick, brutal washes to cross-grain desert, flowing woods trails, tough rocky hills, fifth-gear wide-open washes and technical granite drops. The Saturday ride is 100 miles long and feels like four unique worlds of off-road riding in one loop. Our Cone Valve machine was the epitome of superb. It’s not a “sit in the saddle and plonk” cush-monger; this machine has an appetite for chewing on nasty terrain and spits out control, feel, rider confidence and, ultimately, comfort. Is it worth $6800? It depends on your priorities. But now that we’ve experienced its virtues, it’s going to be tough going back.  www.wp-suspension.com/en-us/