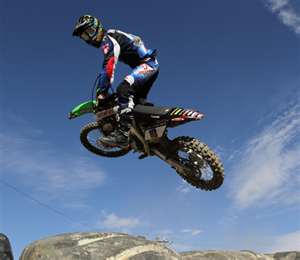 Colton Haaker gets First Ever GEICO EnduroCross Win at Las Vegas
Las Vegas, NV (May 4, 2012) – The 2012 GEICO AMA EnduroCross championship, presented by Lucas Oil kicked off with a bang inside the Orleans Arena in Las Vegas. Colton Haaker got his first ever GEICO AMA EnduroCross main event win by leading every lap of the main event. The Lucas Oil backed Kawasaki rider withstood heavy pressure from Monster Energy Kawasaki’s Justin Soule for the duration but never put a wheel wrong. KTM’s Taddy Blazusiak came back from a first turn crash to finish third. After going undefeated in 2011, Blazusiak had a tough day and crashed a few times in practice and during his heat race, which forced him to the Semi. Beta’s Cody Webb finished fourth ahead of Taylor Robert rounded out the top five. Mike Brown, Cory Graffunder, Kyle Redmond, Kevin Rookstool, Brobby Prochnau and Destry Abbott rounded out the top eleven riders that made the main event.

Mike Brown got the day started off by setting the fastest lap during the hot laps, where the riders do a single lap against the clock. Blazusiak finished second ahead of Webb, Graffunder and Robert.

The evening also included the support classes. The Open Amateur class, which was won by Max Gerston over Bryan Roper and Shane Cuthbertson. Kurt Nicoll won the Vet class over Josh Adams and Rich Black. Phil Smage, won the TrialsCross class ahead of Zach Sweeten and Ty Cullins.

The Women’s class was won KTM’s Maria Forsburg. Kacy Martinez passed Forsburg and led for a little while to make it interesting but a mistake forced her to settle for second. Louise Forsley finished third with Chantelle Bykerk fourth and Nicole Bradford rounding out the top five.