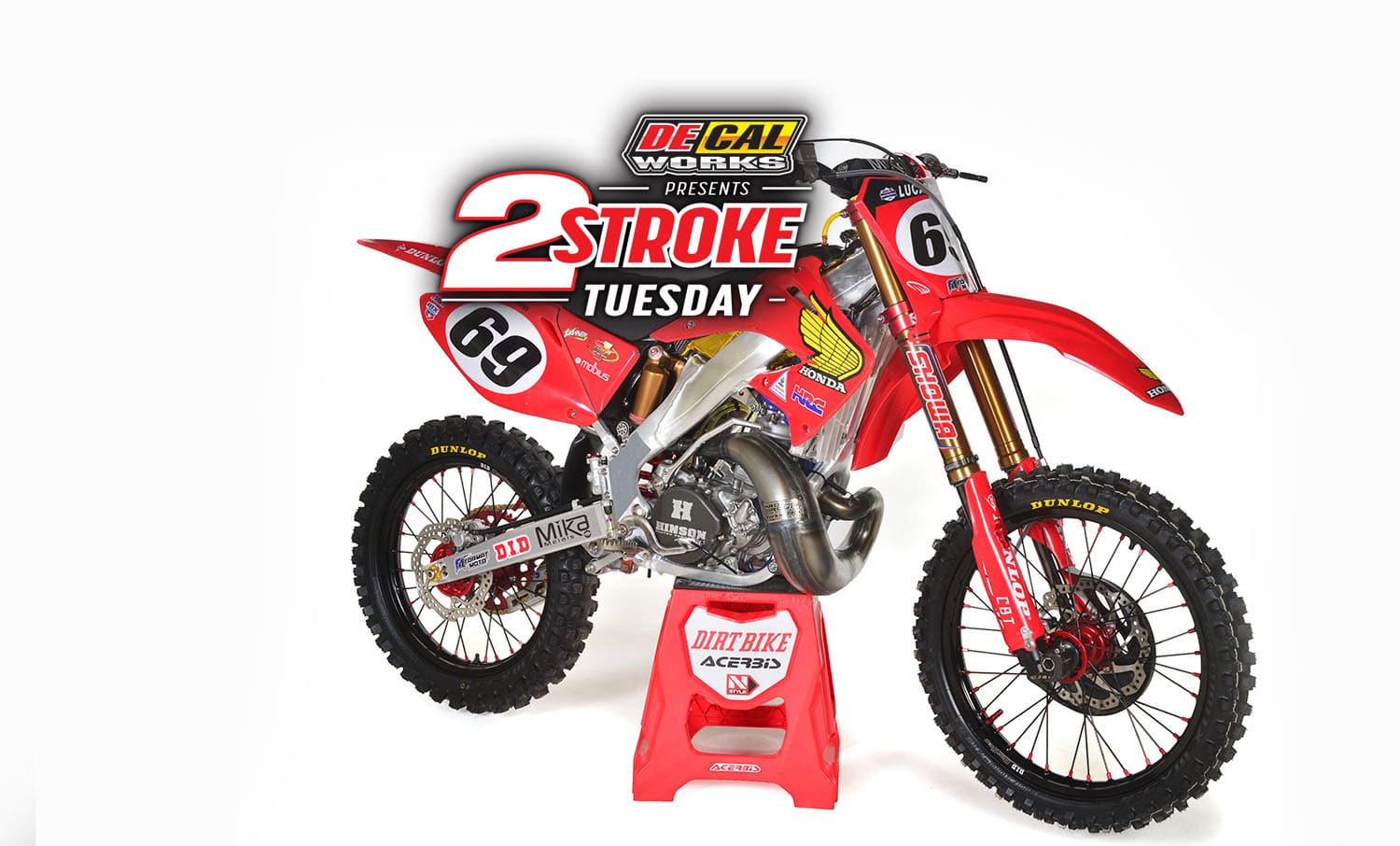 On this week’s Two-Stroke Tuesday brought to you by Decal Works we take a look at a very clean Honda CR250R project by Cole Tompkins. The bike needed a lot of TLC and he tells us all about it below. Honda two-stroke faithful won’t want to miss the link at the bottom of this post to what might be “The dumbest idea that ever came out of a Dirt Bike Magazine editorial meeting.”  We call it Frankenbike! 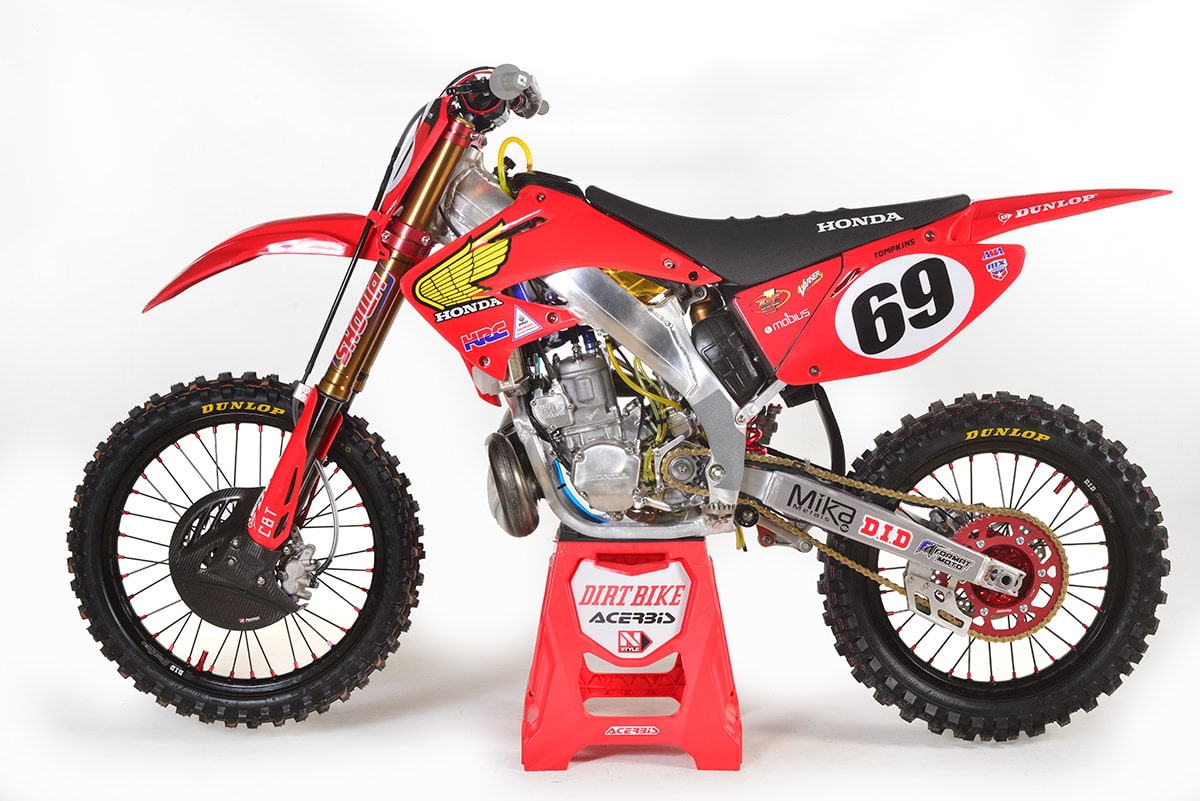 I ended up buying this bike for $1,600 from a close buddy of mine at the ending of 2019 and I knew once I got it I had a vision for making it “like a modern day factory 2stroke”. 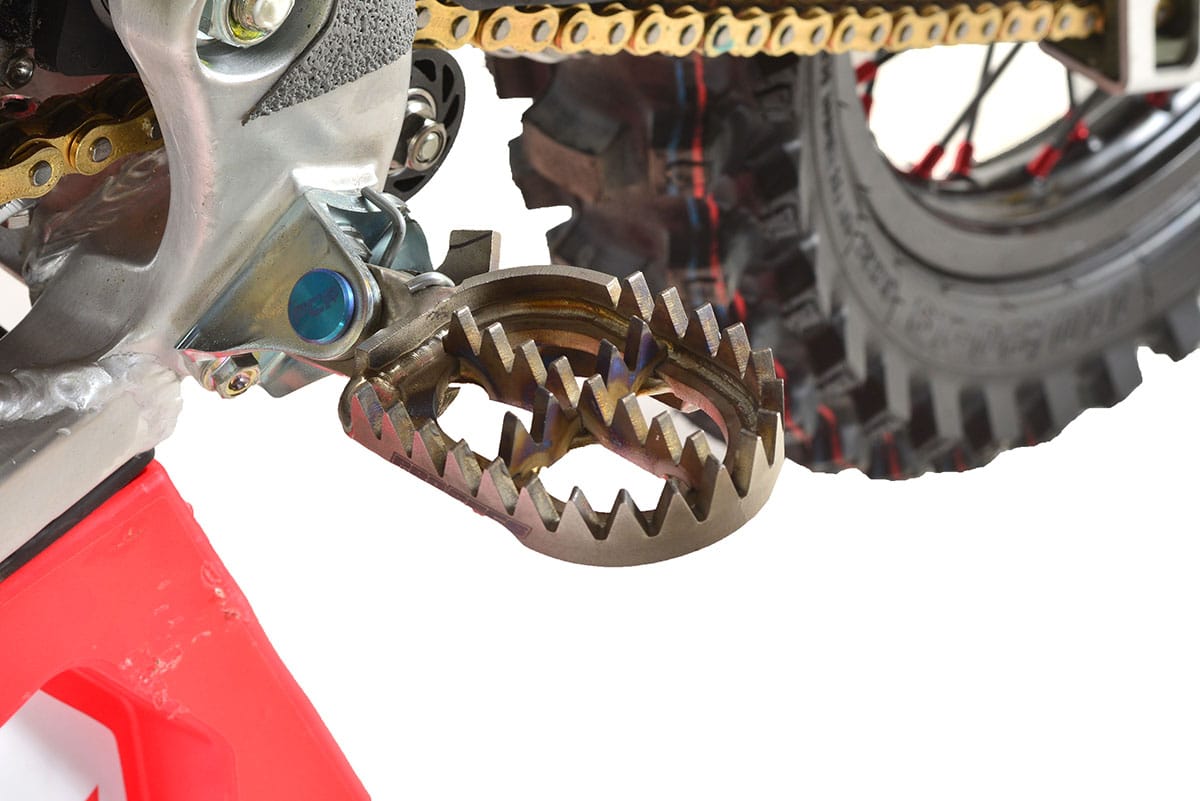 More titanium parts, the peg pin is FCP and those are Pro Pegs. 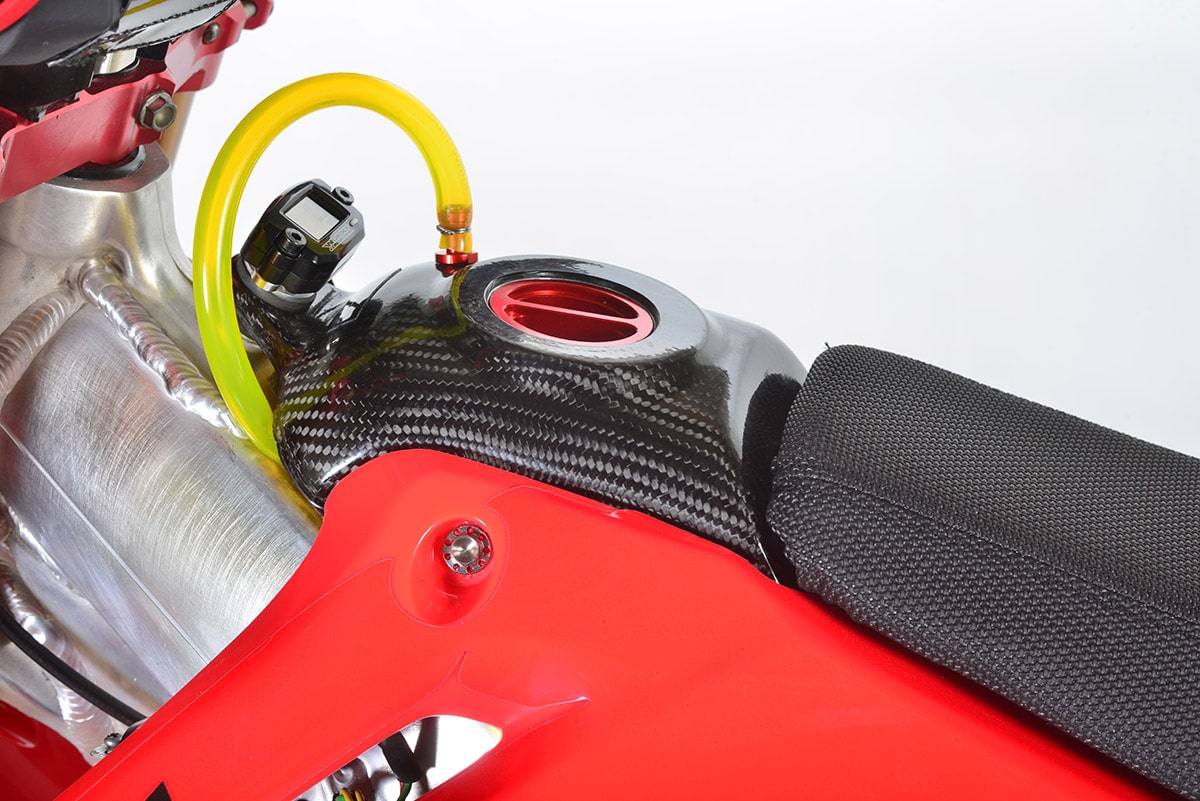 CMT carbon fiber gas tank is a work of art and after it being lost 3 times I finally got my hands on one! 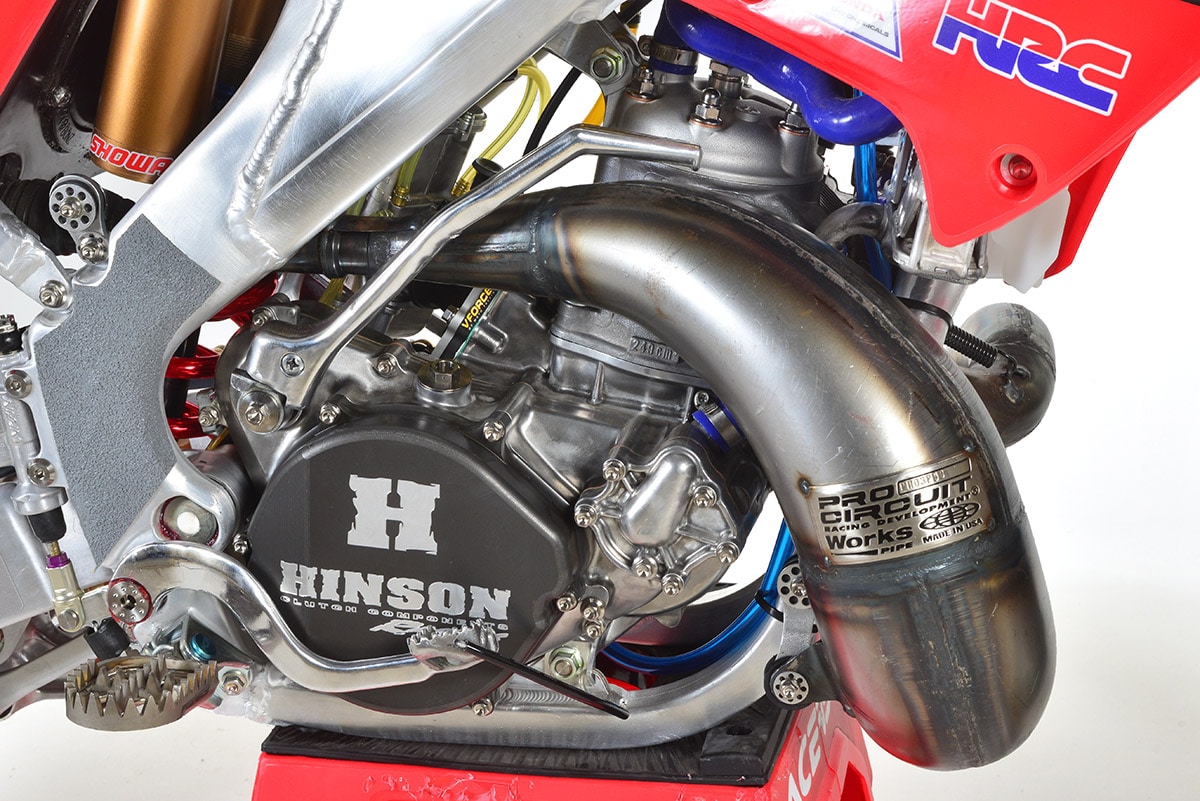 The pro circuit pipe took me 3-4 months to get, and the silencer came from Germany. The bike has all titanium hardware except for linkage bolts and axels, the titanium I have is 90% from Doc Wob and the rest is from Race Tech Titanium.  The bike has a ton of OEM parts, only thing not OEM in the motor is the piston, I replaced every bearing inside the motor and even has an OEM crank, brand new OEM cylinder. The chassis side of the bike has all OEM brand new bearings and seals in every linkage bearing and swing arm pivot, and also the headset. 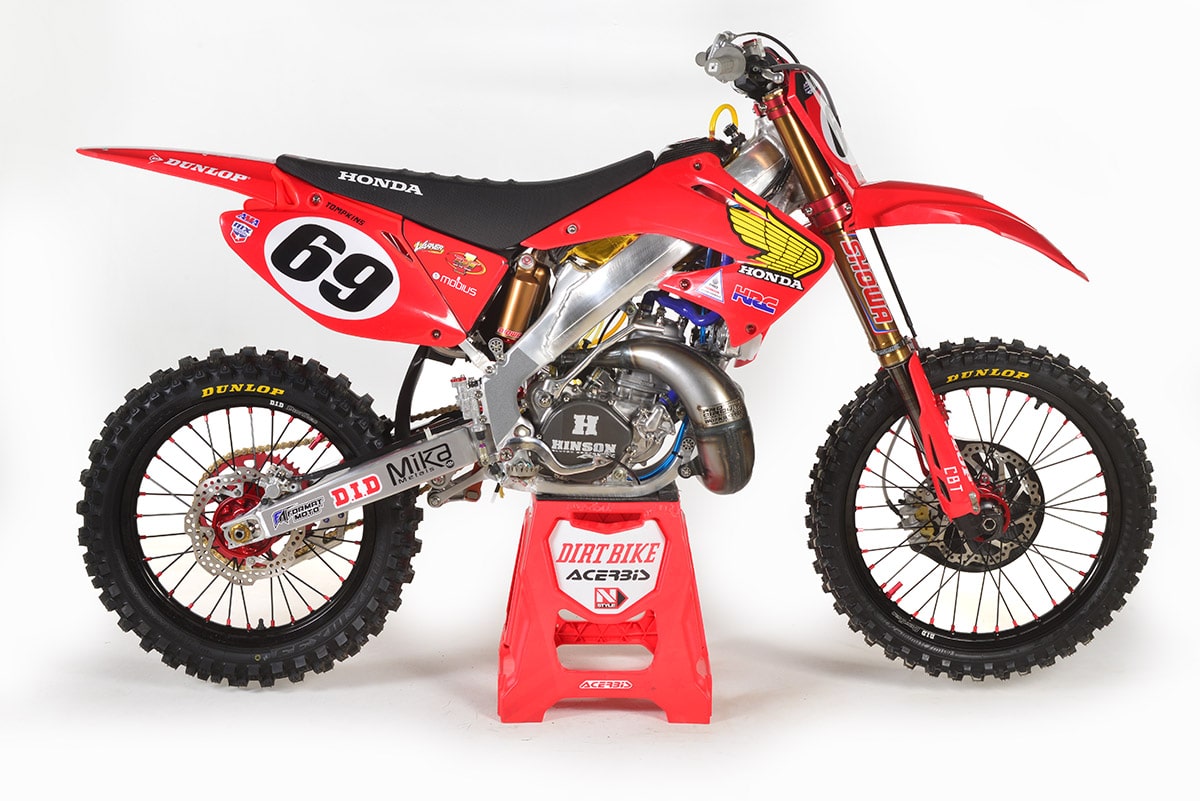 The suspension on the bike is pretty special, the forks are showa 49mm kit with billet lugs matched with xtrig rocs triple clamps, the suspension work was all done by stapes suspension, his work is amazing and always goes to extra mile on everything he does, the rear shock has some really good internals too paired up with that candy red shock spring, my long time neighbor does a lot of fab work for pre runner trucks and RZRs, so he did some sweet things to my sub frame and also my radiators, along with my swing arm. 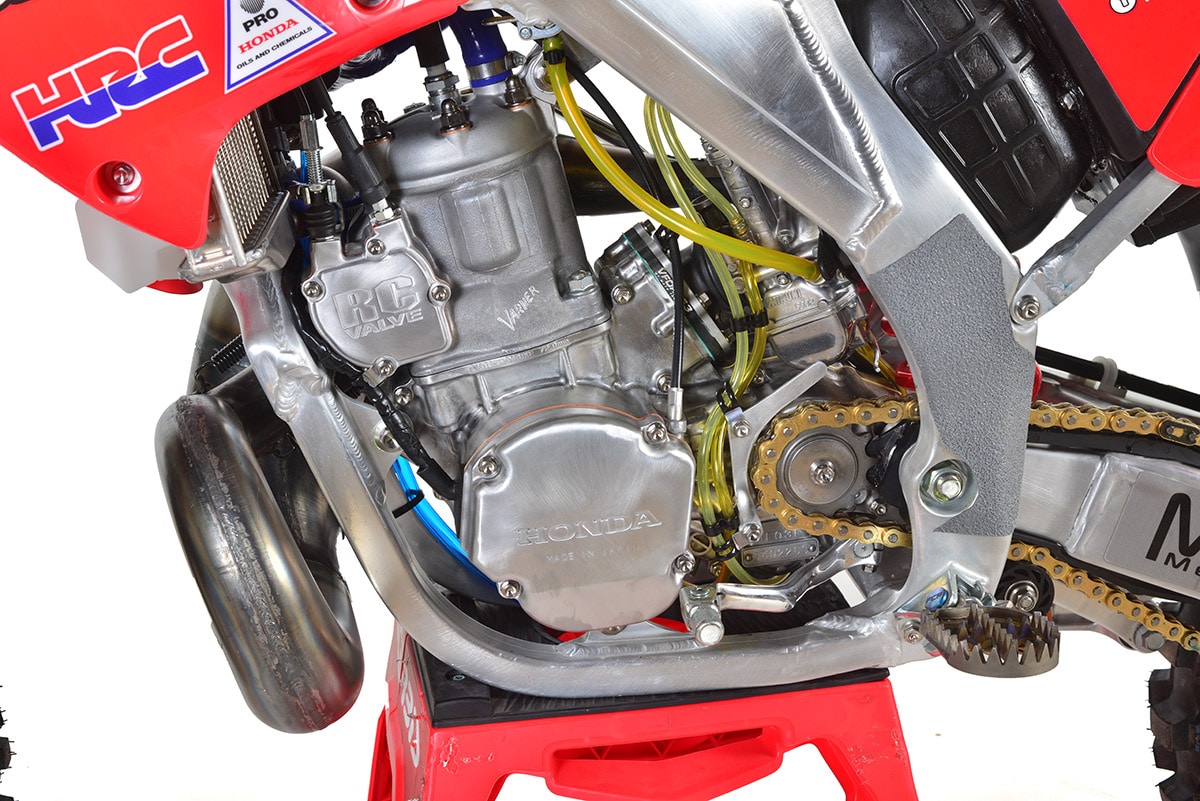 The motor work was all done by myself but it wouldn’t of been a ripper without the help from terry varner, he made my intake, cylinder, cylinder head look amazing and to help with the bottom end that these bikes lack. The bike probably had 150 hours on it, so it took tons of wet sanding and red scotch bright to make the aluminum come back to life, I had my fab buddy fill some of the big deep scratches in the swing arm with his welder,  the cases had so much staining that I had to put scotch brite wheels on a bench grinder to get the cases to come out clean, lots of fine work to make the cases come out.

It was probably the dumbest idea that ever came out of an editorial meeting. These meetings are already known to generate cases of mass stupidity, as editors, staff members and test riders get together to discuss future issues of Dirt Bike, but this particular idea was special. “Why don’t we get a super-cheap used bike off Craigslist and see how far it goes in the 24 Hours of Glen Helen?” someone said.
“You know what would be good?” chimed in someone else. “If we raced it as-is, no race prep whatsoever.”
“Okay, but what if we had all the parts in the pits, ready to go? When the clutch breaks, we put in a new one. When the tires go flat or when we break spokes, we put on new wheels. You have to do most of that stuff during the 24-Hour anyway.” 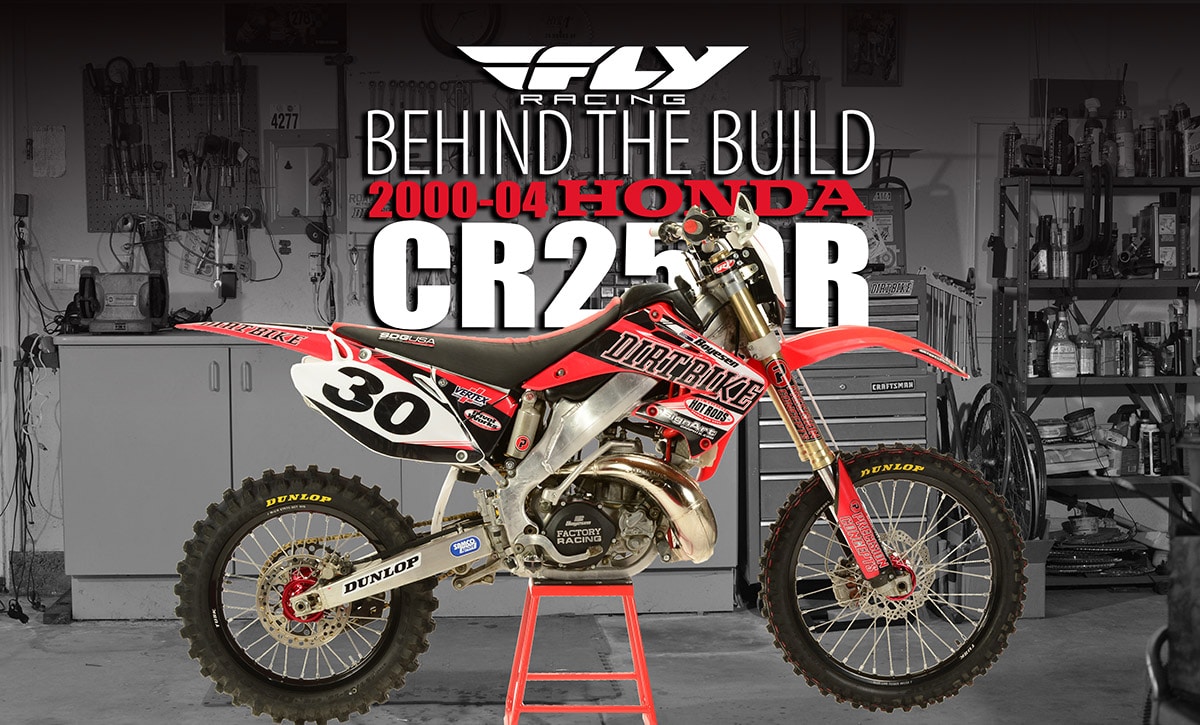 3 THINGS TO ADD TO YOUR DIRT BIKE EQUIPMENT LIST