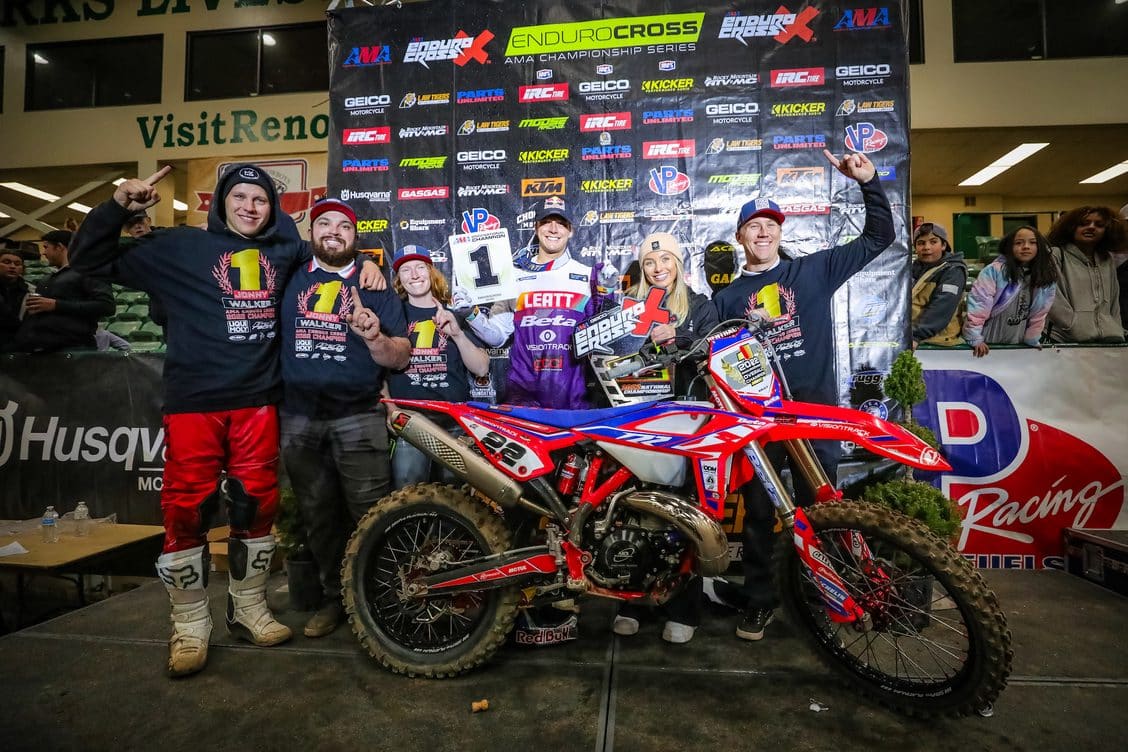 As expected, the championship title race came down to the final moto in a thriller between Hart and Walker. Hart went 6-1-1 across the three motos, but ultimately his first moto finish would hurt him as Walker went 3-2-2 in the series which landed him in second overall on the night with Hart taking the third spot overall for Round 6. Webb took the top spot on the podium for the final round, after finishing 1-3-3, giving him the overall series edge over GasGas Factory Rider, Taddy Blazusiak, who finished sixth on the night, and fourth in the series overall.

To kickstart round six, the defending champion and Rockstar Husqvarna racer, Colton Haaker, set the fastest hot-lap time to set the starting order for the first of three motos with a time of 59.768. Webb had the second-fastest time of 1:00.194. Blazusiak took the third fastest hot lap at 1:02.050. Hart would get the fourth fastest time and Walker had the sixth.

Haaker started off moto one strong with the Moose Holeshot and an early lead, ahead of Walker and Webb. Hart would crash in the early laps of the moto leading to his sixth-place finish in moto one. Haaker and Webb battled for the top spot for the duration of the race. On the last lap, Webb started pushing the envelope looking for opportunities to cut inside to pass Haaker for the lead. The aggressiveness would pay off when Haaker went wide on one of the final turns into the rock garden, Webb dodged inside and narrowly took the lead away. He would hang on through the final turn of the track to take the checkered flag first in moto one. Haaker finished second ahead of Walker in third, Will Riordan in fourth and Ryder Leblond in fifth.

The second moto inverts the sixteen riders’ finish positions from race one for gate picks, so the top eight riders start on the second row. Beta racer, Tim Apolle, would take the early lead out of the gate ahead of Webb, Hart and Walker. Webb would take the lead from Apolle early on only to have it taken from him by Hart in the third lap. Walker would capitalize on Webb not soon after Hart did and move into second place in lap three as well. Walker and Hart spent the remainder of the race neck-and-neck for the top spot, with Walker making multiple attempts to take the lead away from Hart, getting close a handful of times. Ultimately Hart would prevail and take the first-place finish in moto two. Walker would come in second and Webb in third.

In an ending fitting to the extreme talent and competition we have witnessed this season, the series championship title came down to the last moto of the last round. Walker and Hart lined up for the final gate drop of the season knowing what had to be done to secure the number one title. Walker would take the lead when the gate dropped and hang on to it for the first two laps with Hart right on his heels and he would pass Walker for the lead by the third lap. Hart rode well in moto three making it hard for Walker to gain much ground on him, but Walker maintained the second-place spot not too far behind the entire race. For Hart to have won the series, he would have needed for Webb to pass Walker and take second place in the moto, and it was not out of the question with Webb riding aggressively all night as he looked to gain ground on Walker as the race went on. Ultimately Walker would hang on to the second-place spot in the moto which was all he needed to claim the championship title to cap off an incredible season of racing for his rookie EnduroCross season.

The sixth and final round of racing was as exciting as expected to cap off an incredible series of the most talented racers in the sport who produced the best racing an EnduroCross series has ever seen.