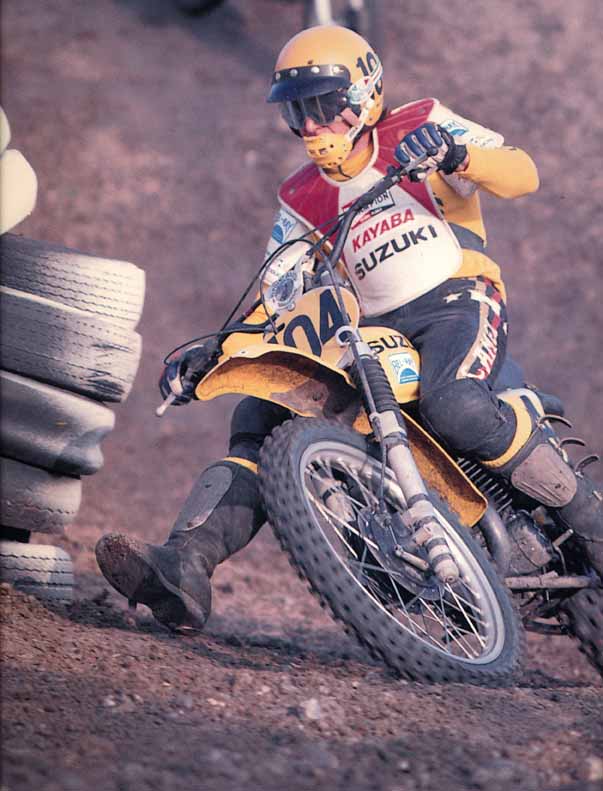 In the April 1993 issue of Dirt Bike, then Executive Editor Roger DeCoster wrote an especially memorable story on the meaning of the word talent. It still rings with truth today.

What really separates champions from everyone else?

It’s invisible. Yet everyone knows it’s there. You can’t measure it. yet it can be more valuable than gold. It can be a living. It can be an excuse. It can even be a handicap. People seem to know who has it and who doesn’t, but does anyone know what it really is?

‘It,’ of course, is talent, the mystery ingredient that makes champions out of otherwise ordinary people. In my career I have seen many champions who were supposed to have talent, and others who allegedly had none and were said to work harder to overcome this lack. I think that the average spectator sees the apparent ease with which someone rides and wins races, and the viewer has to attribute this to something. Twenty people might start the main event in a supercross on equal footing, yet only one demonstrates the ability to win on a given night. Only one shows that, in some way, he is better than the rest. How? I think in order to explain something they can’t initially understand, race watchers (and other riders) imbue the winner with some mythical, magical power and call it talent. They don’t want to know what talent really is, because that destroys the romance and mystery of the incredible feat of winning a race. However, I think I know what talent really is. Unfortunately, it’s not magical, mysterious or invisible. It is, though, something a little different in every rider. For some, it’s the ability to train a little harder,  for some it’s unshakable self-confidence, for some it’s a way of thinking about a track. Here are some riders I have seen over the years and how each one’s particular talent manifested itself.

Joel had a reputation for partying and being wild. People saw him win despite this and attributed it to blind talent, something he was just lucky to be born with. While it’s true that Joel wasn’t a saint, he developed his ability from long hours of riding and practice. He did have a great talent for acting, and making people believe he didn’t have to work. Joel was very good at getting other people drunk. If you drank a toast with him, chances are his drink would wind up in a nearby flowerpot. I remember one race in Australia where Joel filled up an empty bottle of Johnny Walker with iced tea. He proceeded to stagger around the pits before the race, flashing the bottle and taking big gulps. Some of us knew what was going on, but the race officials thought he was actually drunk. When it was time to stage fbr the race. he fumbled with his helmet for a few minutes, then put it on backwards. It was a spectacular performance! When he tried to start the bike, he missed the kickstarter and fell over. The officials actually tried to ban him from the race for his own safety. The riders had to insist that Joel be allowed to race–we sat on the start gate until he was permitted to come to the line. Joel’s ability to win came from his desire. That is, without doubt, the most important element that makes up any champion’s talent.

Bayle’s talent was the way he thought about a given track and how to get around it. He was always looking for an easier way to ride. As a result, he made it look like winning races took no effort. On the track, that was probably true. He didn’t work nearly as hard as some other riders during the race, but it was because he was taking easier lines, using his head and letting the motorcycle do more of the work. Actually, Bayle worked very hard before a race. He would analyze lines and sections, think about what he was going to do. In practice, he often would work on a single turn or section for hours. Over and over, he would do the exact same part of the track, until he could do it perfectly. Then, on race day, spectators would see him go through a similar section and say ‘Look how easily Bayle did that! He’s really got talent!’ Another ability that Bayle had was that he was very good at setting up his bike. He’s actually the best I have ever worked with. Many other riders would have trouble with a section and they wouldn’t be sure if it was the bike or their own riding. Bayle always knew.

Early in his career, Bailey decided he wanted to be smooth and stylish. He worked on it. That was his goal, his target. His talent was in setting that as a goal and devoting himself completely to it. Perhaps that’s why he was so successful on the 500 where aggression doesn’t pay off; smoothness does. Bailey was the first of a new generation of super-smooth, thinking riders. Since then, many have tried to copy his style. The most successful was Jean-Michel Bayle. When Bayle was younger, he admired Bailey and wanted to be like him.

Bob Hannah worked hard during the week. He ran, he trained, he tested and when it came time to race, he had extreme confidence. He was absolutely sure that no one else on the line had worked as hard as he had. He didn’t look for the smoothest line because he didn’t have to- -his conditioning was good enough to handle anything. He could take any line and make it work, and that’s why he was able to come through the pack after a bad start. In his best years, I think that Bob didn’t believe he could fall. Everyone has seen him get into terrible situations and somehow manage to stay up. People thought that this was some magic gift, but actually it was confidence. Bob felt–no, he knew–he could do things that most other riders wouldn’t try. He was right, but first he had to have the confidence to try. Hannah also was a great rider to work with. He would give it all he had.

Rick had all of the necessary ingredients. He had a fantastic desire to win, worked and trained hard and had confidence in himself. He could analyze the difference between a good race and a bad race, then turn his weaknesses into strengths. However.. one thing that set  Rick apart was his ability to get people behind him. No matter where we went or what country we were in, Rick was able to get the crowd to cheer wildly for him and draw strength from them. He was also able to  get everyone on the team to work hard and devote themselves to helping him win.  Rick was a natural leader. He inspired everyone to support him and then used that support to build more confidence for himself.

Most, people perceive Ron Lechien as one of the most talented riders ever. He made riding look easy, and it was well known that he didn’t like to train.  How else could he win so many races if it was not for natural talent? Ron knew he didn’t have the endurance of the other riders and he would think about ways to conserve energy. Hi s true talent was in not using too much strength to ride, and that made him look very smooth. Like Bayle, he would think about a track and ride using his head. I have reservations about declaring him the most talented rider of all. The ability to win championships is a combination of many traits. It takes desire, confidence, dedication and other talents. Those can be  mixed together in different ratios. Lechien had most of the ingredients, but not enough desire to win more championships. If you view desire as a talent, and I do, then Lechien didn’t have quite enough.

Jeff is the ultimate example of dedication. He trains harder than anyone else, and it shows. On tracks that physically beat a rider, like Daytona, Jeff really shines. When there’s no easy way around a track, when all the lines are equally tough, Jeff has an advantage because he hasn’t taken any shortcuts in his training regimen. Jeff is the strongest guy out there and he knows it.

This is a good example of when an asset can be a weakness. Because Jeff knows he’s so strong, sometimes he doesn’t take the time to set up his bike as good as it can be. On the track, he might not look for the easiest line, but Jeff has so much discipline and desire to win that he can overcome all that and win anyway. Jeff also has the ability to perform under pressure. When the pressure is on, Jeff gets better, while others lose performance in the same situation.

So it’s clear that there’s no mystery to talent. It’s not something invisible. In most cases, talent is the tendency to try harder than the rest. Obviously, we all have some limitations determined by genetics, but this is no excuse to give up. There are so many things we can do to turn our weaknesses into strengths. It all depends on where we set our goal and how much we want it.