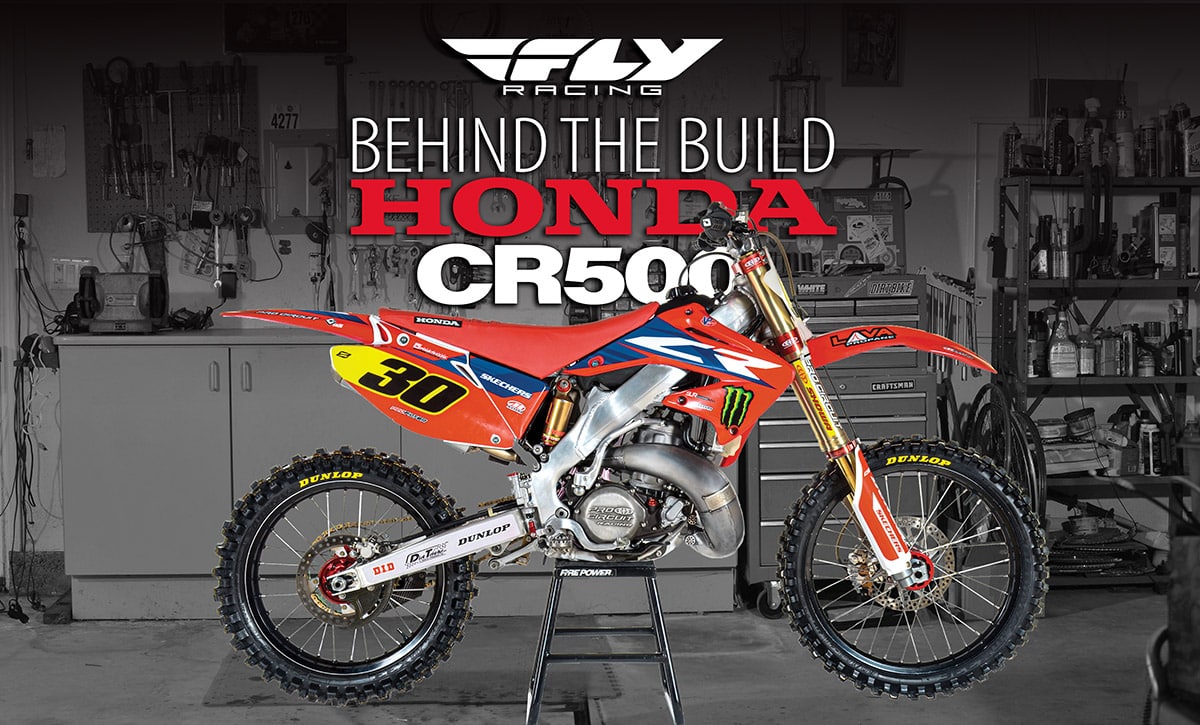 A 2006 aluminum-framed Honda CR500 two-stroke would have been a very popular conversation piece at Honda dealerships all around the world the mid 2000s. Unfortunately, Honda never mass-produced this unit, and there are only a handful of them around today. The machine in this story was originally built by Pro Circuit sometime around the end of 2006 or the beginning of 2007 and just might be the only one of its kind. 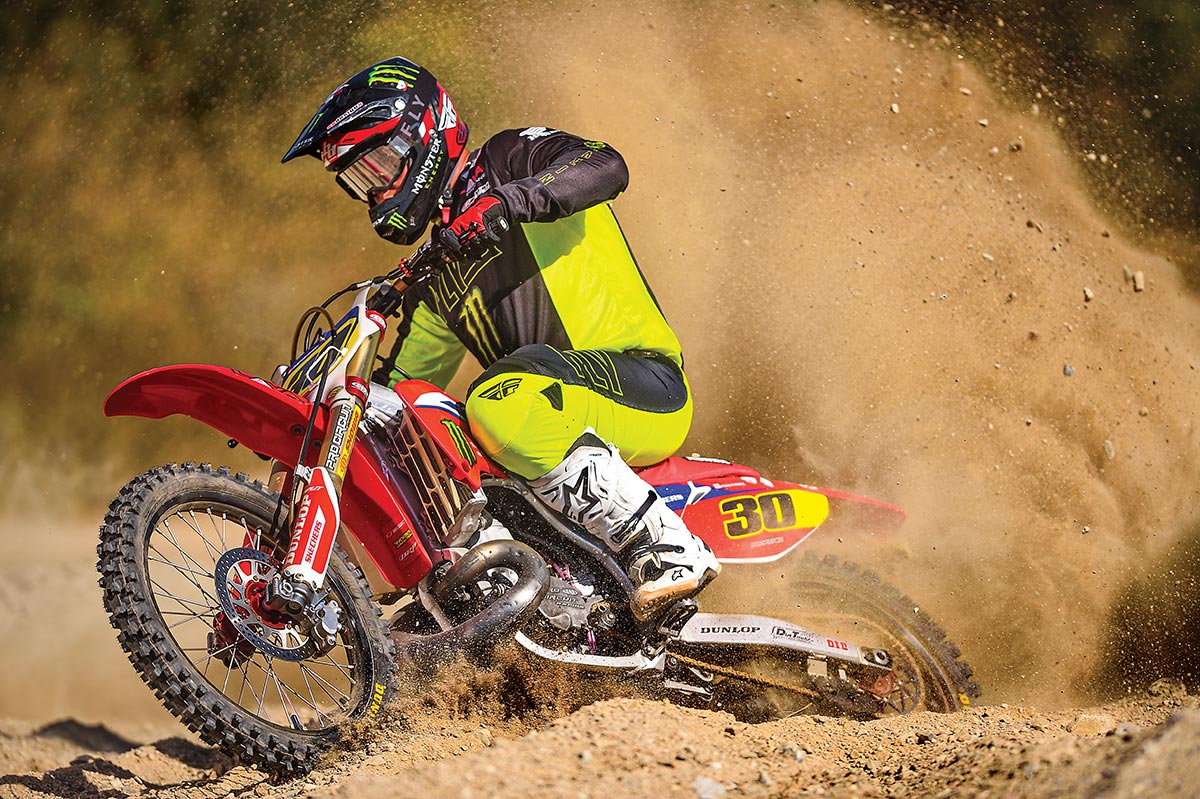 Just like people, every motorcycle has a story, and some of them are more interesting than others. Like we said before, this bike was originally built by Pro Circuit in the final years of Honda’s two-stroke race bike production days. Back then CR500 steel-framed bikes were all over the place, and as you can imagine for most Honda lovers, the urge to stuff one of those big-bore engines in an aluminum frame was overwhelming. AJ Waggoner at Service Honda was at the forefront of this movement and was involved in the frame modifications on most of these types of builds. Although Service Honda is not around anymore, Wagner is still building conversions today through his company Built 500 with machined billet-aluminum CR500 cases and all kinds of trick parts.

This bike was purpose-built for the famed Mammoth Mountain Motocross, which is held once a year in Mammoth Lakes, California. Rumor has it that former 500 national champion Jeff Ward was supposed to race it because, at the time, he was part of the Troy Lee Designs Honda-backed Supermoto team but that never happened. Some say that Ward rode it one time and said, “No way,” while others said there was a scheduling conflict with other races he had commitments to. Bottom line was that rider pairing never materialized, but that was not the end of this bike’s journey; quite the opposite, in fact.

After sitting around idle at Pro Circuit as a showpiece for an undisclosed amount of time, it surfaced 10 years later at a local shop in downtown Boise, Idaho, where it caught the eye of our good friend Pete Treadwell. No stranger to custom-fabricated machines, Treadwell was a part of the huge 50cc four-stroke pit bike craze as a member of the BBR Motorsports crew. One night around the dinner table Treadwell mentioned this CR500 to his lovely wife Pam, and being the amazing wife that she is, Pam surprised him and bought it.

This is where Dirt Bike’s Mark Tilley and Travis Fant first came in contact with the bike. Treadwell works at Western Powersports (WPS) and invited them both up to Boise to test a few motorcycles he had built, and rode Jason Smith’s nitro-methane-burning hill-climb bike. While in Idaho, the Tilley/Fant duo shot videos and did stories on multiple bikes. This CR500 was featured in a “Raw” video and piloted long-time SX/MX professional rider Jason Thomas, who after filming said, “That thing is insane, and I am glad that is over!” Funny side note: local pro and also WPS employee Kyle Gills jumped on the bike and loved it. Guess that saying, “Different strokes for different folks,” is a true statement. Unfortunately for some unknown reason a full story never appeared in DB about the bike.

Fast-forward to 2022 at the annual running of the Mammoth Mountain Motocross, DB’s Mark Tilley saw SLR Honda team owner Mark Samuels racing a sweet-looking CR500 in the 30+ Pro class. The two talked about the bike on the start line, but Samuels didn’t know much about the bike besides Chris Hymas owned it and he was riding it on a dare. Plans were made on the spot to do a story. A while after the event, Tilley, Fant and Samuels met up and shot a video, while legendary DB head editor Ron “Money Shot” Lawson was on hand to handle all the action photography needs. At that time Samuels put Tilley in contact with Chris Hymas, and after a very short conversation, the information surfaced that Hymas had acquired the bike from Treadwell and this was, in fact, the same bike that the DB crew had shot six years prior in Idaho at WPS. Our minds were blown! The bike naturally looked completely different with team SLR graphics and had some upgrades added to it over the years, but surprisingly, most of the bike remained in original form from when the crew at Pro Circuit built it over 15 years ago! 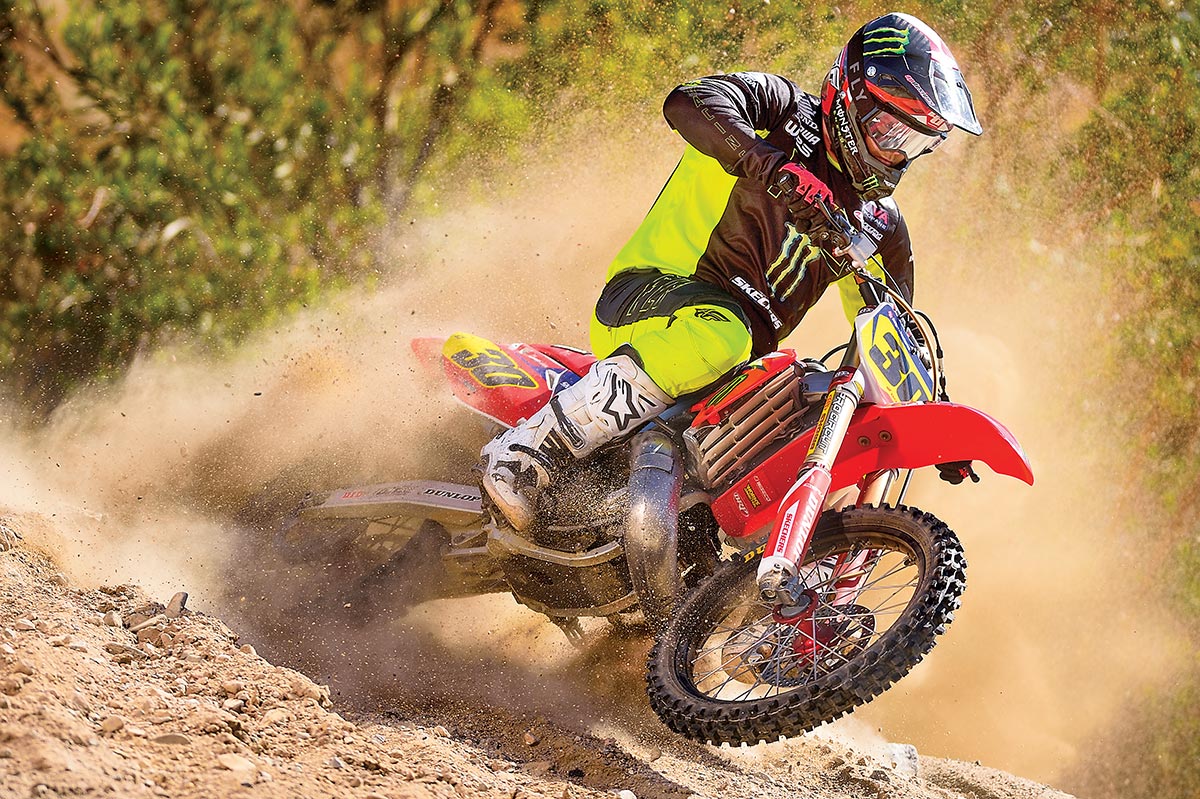 Here at the magazine we build and feature at least one project bike a month, and we know Tilley has about 10 different builds going on at any given time, so project builds are part of a DB editor’s everyday life. We don’t often take the time to think about what happens to the bikes once we move onto the next project. It always surprises us how big the world can seem at times, and then when we randomly come across a past project again like this CR500, we are reminded by how small it really is and how many people can be brought together with one project bike build. We are definitely blessed to have these opportunities, and with that said, it’s time to start building another project bike.