CHUCK SUN: FROM INDY TO WORCS 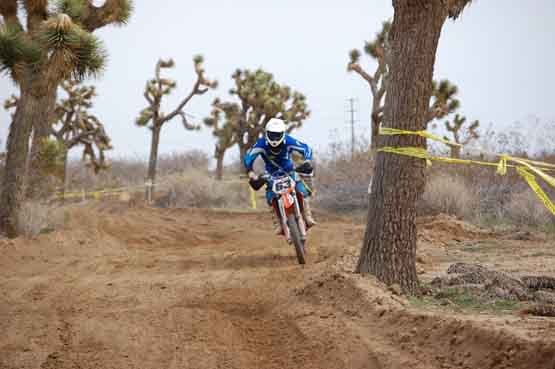 Share FacebookTwitterGoogle+ReddItWhatsAppPinterestEmail
Last year I had lazer clarity allowing me to bore holes in the barriers that materialize during a quest for a 50+ World Championship.  Naggly thoughts such as your gonna need bigger springs, can you even see?  And the biggy “You should get a job and settle down”.  Mountain biking and contacts took care of the first two issues and a host of fantastic sponsors saw me through a dream year of racing adventures.  Now for 2009 my vision statement includes “job like activities” so off to Indy I go chatting up the virtues of Tubliss to throngs of captive dealers.  It has been said that bankers attending trade shows are just squandering bail out money, but I can assure you that the Indy Motorcycle show is real work and just as grueling as riding baja!  Maybe it’s the work in the evenings like attending the Penton Owners Group party at Indy store Wicked Motosports while enjoying a refreshing beverage that could be the culprit.  Two days after returning to Vegas from Indy…..
Denise was shocked when I suggested our first outing would be attending the Race Town 395 WORCS race in Adelanto departing Las Vegas at 4 am!  A quick two and a half hours later I explained to Denise during sign up that 50+ plus means that I have acquired enough points to qualify for that class, thus the fewer entrants.  My rouse was nearly up when Goat Breker shared with a group that he was 2nd to me in the battle for the 1980 500 MX championship.  One of the younger mathematicians with facial hair in the group blurted out that was 4 years before he was born!  As I began shuffling Denise to the track as the required 96db at worcs would still drown out his blather, when he shouted out again, hey man my dad was only 14!   Ya Ya…

Greg Zitterkopf gives Chuck Sun valuable opinion on the line.
Unclassified (practice) was a blast in the deep moist high desert sand, but offered the first clue that it may be a rough day.  I felt very puffy, not the lazer lean racer from last year, more like dim bulb.
At 1pm we raced off the line into the now very rough sandy track and after the first 9 minute lap I knew I was in trouble and time for a new strategy.  A new spin on rope a dope.  I’ll let Idaho’s Don Grahn and pro rider from the day Eric McKenna race themselves ragged and I’ll bag’em at the end.  I actually caught and passed Don a few corners from the finish line only to miss cue a banner into the finish line placing 3rd 18 seconds back from race winner McKenna,  so the only dope that was roped was me!
Sunday morning back in Vegas still undecided on MRAN’s Rabbit Royale race when David Whitehead of Trac-On Adventure Tours said he would pit for me and quit being a p__y!  Arriving in Jean, Nevada just 20 minutes from my Vegas pad the Jack Rabbits club informed me that the MRAN card lady had just left.  They called her and she politely came back to sign me up.  Cool! I barely had time to get into my gear and fuel up receiving assistance from David Wilson of the Wild Bunch to insert the convenient spark arrestor screen on my KTM’s Leo Vince exhaust.  Cool, I was in row 8 having entered into the 40+ as the opens in row 1 just took off in a cloud of dust.  The 37 mile course was a bit dusty on the lower portion of the course, but as it wound up the wash’s into the hills the moist dirt was a rare treat in Nevada.  Cross drain from recent rains and a well used part of the valley created ditches that could launch you over the bars in the dust and made for a physically demanding event considering they sent us out for 3 laps!   I finished 12th physical bike first in class 40+.  You know I like the WORCS format a lot as it reminds me of the long 45 minute motos back in the 80’s.  However when a group of volunteer’s like the MRAN’s Jackrabbits set up a 37 mile BLM permit loop, that is a special treat!   If anyone gets down watching the news, go to a race where everyone gets pumped doing the best they can every fun lap!  Next adventure  is down to San Felipe for the Score 250 for some redemption in Baja.
Share FacebookTwitterGoogle+ReddItWhatsAppPinterestEmail