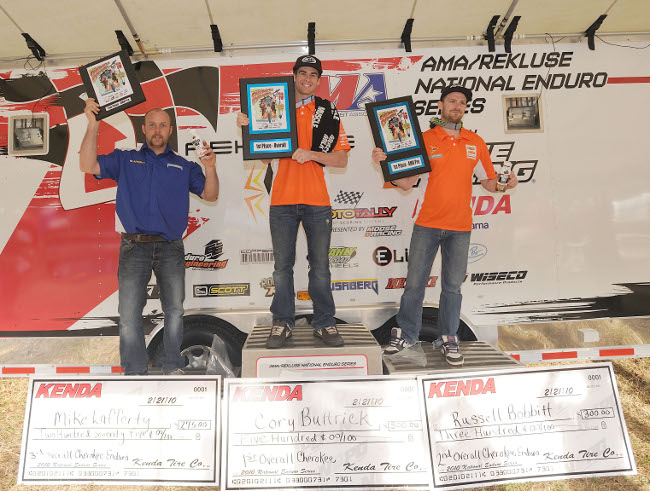 Share FacebookTwitterGoogle+ReddItWhatsAppPinterestEmail
The Rekluse/AMA National Enduro series saw its second first-time winner in as many rounds as 19-year-old KTM rider Cory Buttrick took the win at this weekend’s Cherokee Enduro, in Greensboro, Georgia – round two of the 10-round series. First round winner Charlie Mullins led the 81-mile event for the first four sections and eventually won five of the six sections, but problems in the fifth section relegated the Obermeyer/AmPro Yamaha rider to fourth overall. Second went to defending series champ Russell Bobbitt on his factory KTM, while Husaberg’s Michael Lafferty rounded out the podium in third.

In stark contrast to the opening round in South Carolina, the weather could not have been better for the Cherokee, as temperatures in the 60s greeted the nearly 500 entries. Taking advantage of the perfect conditions, Mullins jumped out to a 12-second lead over Bobbitt after the opening 6-mile section, with Buttrick another second back.

Mullins added nine more seconds to his advantage in the second section and 16 in the third section. Mullins was quickest again in the fourth section, edging Lafferty by 15 seconds, Buttrick by 17, and Bobbitt, who missed a couple of arrows, by a whopping 44.

The fifth section was Mullins’ downfall, however, as the 23-year-old North Carolina resident bent his brake lever back when he hit a stump. Things got even worse when he mistook an Observation Check for the end of the section and lost nearly two minutes coasting along the trail. Finally, a fellow competitor told Mullins he was still in a timed section and the Yamaha rider picked up the pace. Mullins ended up winning the final section, but it was too little too late.

In the meantime, Buttick turned up the heat in the last two sections, taking advantage of Bobbitt’s disastrous fourth test to take the lead. At the end of the day, Buttrick took the win by a 78-second margin over Bobbitt.

“I typically get stronger as the day goes on, and that’s what I did today,” said Buttrick. “I had a couple of little crashes – one of them in section two – otherwise my score would have been better, but I got into the flow of things in the late tests and things started clicking.”

Lafferty ended the day in third, with Mullins and Husqvarna’s Glenn Kearney rounding out the top five.

From Georgia, the Rekluse/AMA National Enduro Series heads south to Florida for the Alligator Enduro in Daytona Beach on March 4th, where Buttrick will try to build on his seven point lead in the series standings. After two rounds, Buttrick leads the title chase with 55 points, followed by Mullins with 48, Bobbitt with 46, Lafferty at 39 and Husaberg’s Nick Fahringer with 31.

Check Out This Video of Adam Booth Testing The New RMX450