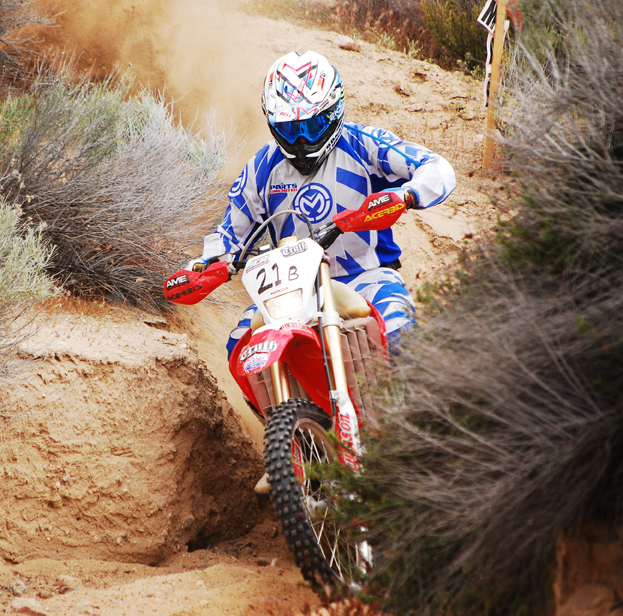 Round 4 of the CHEC ventured into the high deserts of Southern California bordering the Los Padres National Forest for the first and only time of the 2011 Season. After a night of rain and a good amount of cloud cover at the 26th Annual Ventura County MC’s Hungry Valley Quali-FIRE the stage was set for some of the closest competition seen all year. The unique Qualifier format of the event draws some of the heaviest hitters in off-road racing including the Precision Concepts backed Kawasaki of Gary Sutherlin, JCR Honda/Red Bull’s Kendall Norman and JCR’s newest addition David Kamo. Kamo made the trek all the way from Idaho to get some seat time on his new ride and was able to stay up front all day. Through the first special test Sutherlin put his KX 450F out in the lead gapping the field by 10 seconds followed by Norman in second and the Midcities Honda of Nick Blais and Kamo just 1 second apart. After the second test Sutherlin was able to stretch his lead to over 20 seconds with Kamo jumping into 3rd with the second fastest time in the section. Shortly after Sutherlin’s transmission would break, which left him pushing his bike down to the nearest road and he had a good time doing it. ‘I was coasting down this hill passing riders that were racing!’ he laughed ‘Then I got to the road and people kept stopping asking ‘did ya break down?’…really? I’m just doing this for exercise!’

The second loop started with a moto-test which the riders are definitely not used to but Norman made up some time putting his Honda out to a good lead over Kamo in second with 3 Brothers KTM 200 of Andy Vandenberg taking third off the track. The rest of the loop was some of the best laid out trails the riders had ever seen ‘This was by far the best District event I’ve ever ridden.’ said Norman ‘You could really tell that the club and the SVRA had been doing a lot of work out there!’ The 100 riders in a field of 340 were all within 10 minutes of each other, meaning every second would count and Norman was able to take the top spot of the podium just 45 seconds ahead of Kamo. Blais completed the all Honda shut out with PDI Racings Ryan Smith in 4th and the 3 Brothers KTM of Nick Hamill rounding our the top 5. For more information, results and photos from the series check out www.ridechec.com