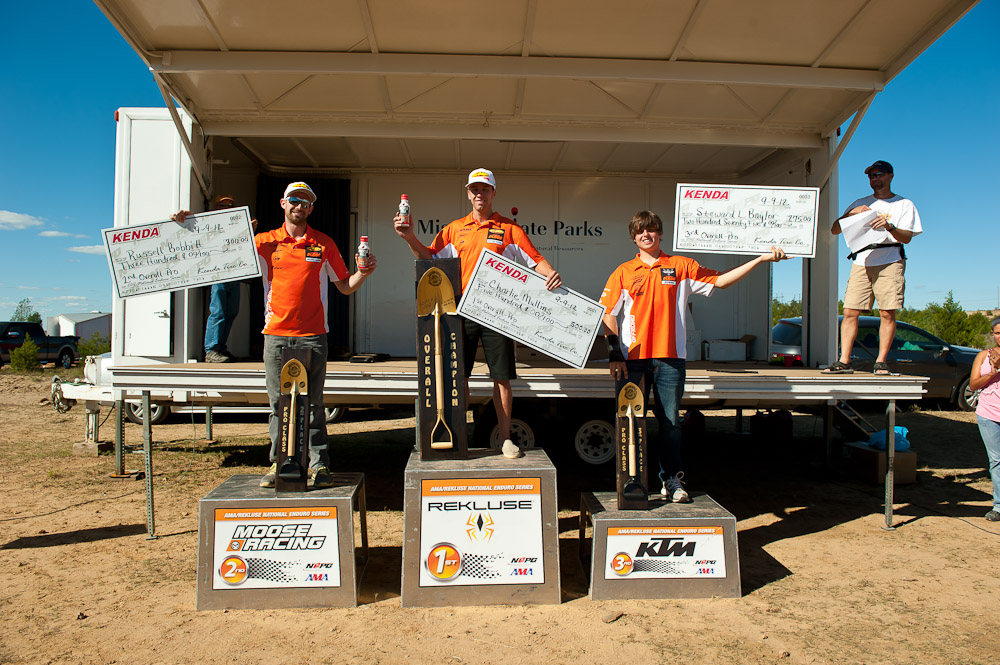 – After spending the summer recovering from a broken elbow, Charlie Mullins returned to racing with a huge win at the Leadbelt National Enduro in Park Hills, Missouri – round eight of the AMA/Rekluse National Enduro Series presented by Moose Racing.

In all, Mullins won four of the six tests and took the win by almost a minute-and-a-half over fellow KTM rider Russell Bobbitt. The win was Mullins’ first of the season, and according to Mullins, it was a bright spot in what has been a frustrating season.

“I’ve been working hard during the summer to come back strong and this was a good way to get back to where I think I should be,” said Mullins.

Mullins was fast from the get-go, winning the opening test by 31 seconds over New Jersey KTM rider Jesse Groemm. In the meantime, heavy hitters like Michael Lafferty, Russell Bobbitt and points leader Steward Baylor all had problems in the sandy, whooped out test, with Baylor going down and reinjuring the hand that he had broken at the start of the season, while Lafferty and Bobbitt each missed markers and had to turn around to rejoin the trail. All three were almost a minute down from Mullins heading into test two.

Mullins and Groemm were again first and second in the second test, but by now Lafferty, Baylor and Bobbitt were starting to pick up the pace.

Test three moved from the sandy ORV section to a rocky wooded area, and Mullins again was fastest, but this time Lafferty was second and Baylor was third.

Mullins had a considerable lead heading into the final two tests, leaving Lafferty, Bobbitt and Baylor to battle over second – that is as long as Mullins kept it on two wheels. Which he did, despite hitting his knee on a stump in the fifth test.

Bobbitt gained valuable time on Baylor in the sandy fifth test, which he said afterwards was he best test of the day. Bobbitt earned the runners-up spot when the two finished the final test with the same exact time, giving the Georgia rider the second step of the podium by just five seconds over Baylor.

“I really enjoyed that fifth test and I was able to get in a groove and rail it,” Bobbitt said.

Fourth went to Lafferty, the factory Husaberg rider finishing 24 seconds behind Baylor after falling twice in the final test.

After getting off to a great start, Greomm struggled in the rocks in the third and fourth sections and settled for fifth, while factory Husaberg’s Nick Fahringer was sixth, a little less than a minute ahead of Obermeyer Yamaha/Raines Riding University/Offroadviking.com’s Brad Bakken.

With two rounds to go, Baylor has a good shot at wrapping up the 2012 title one race early if everything goes his way at the next round of the series in Mathews, Indiana, on October 14th. For more info on the AMA/Rekluse National Enduro Series presented by Moose Racing visit www.nationalenduro.com.