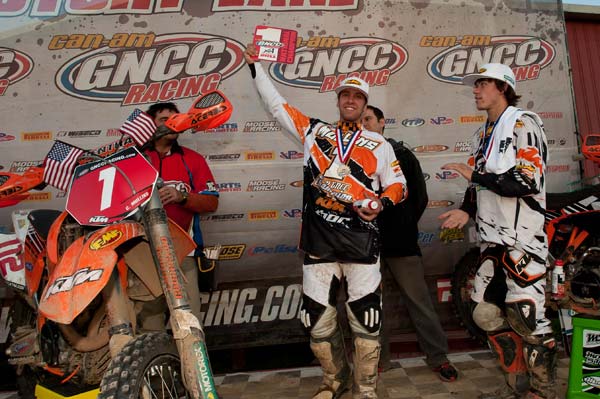 .Hurricane Mills, TN (November 6, 2011) – The first-ever Can-Am Grand National Cross Country Series double-header made for an exciting weekend of racing as Loretta Lynn’s Ranch hosted a record-setting total of nine races – beginning on Friday with day one of bike racing, ATV racing took place on Saturday and the grand finale of bike racing on Sunday. North Carolina’s Charlie Mullins added another page to the GNCC Racing history books by securing the 2011 XC1 Championship title after riding yet another flawless race on day two of the Parts Unlimited Loretta Lynn’s GNCC in Hurricane Mills, Tenn.
Rewinding to Friday, Mullins suffered a mechanical issue near the end of a race that he indisputably dominated, while Paul Whibley and Josh Strang closed the points gap on the American off-road racing star heading into Sunday’s finale. Mullins proved that he could handle the pressure, though, riding his way to claim his first-ever GNCC XC1 title. And to top it off, Mullins also won the $250 Motosport.com Holeshot Award at the start of the race.

Photo By: Shan Moore
Kailub Russell finished off the year with a second place finish..

The win gave Mullins the XC1 title over New Zealand’s Paul Whibley, who won the title in 2009. In fact, Mullins is the first American to win the GNCC title since Rodney Smith held it in 2004, which demonstrates the wide-reaching scope of GNCC Racing. To put the significance of Mullins’ title in perspective, seven of the last 11 GNCC championships have been won by foreign riders, including the last five straight: Australia’s Shane Watts won it in 2000, Finland’s Juha Salminen held it from 2005 to 2006, David Knight from the Isle of Man was champ in 2007 and 2008, while New Zealand’s Paul Whibley and Australia’s Josh Strang claimed the titles in 2009 and 2010. To say the least, Mullins’ win was a popular one, especially since he’s been racing the series since he was a youth rider.
‘It’s a dream come true,’ said Mullins. ‘I’m really at a loss for words, right now. I’ve worked so hard and so many people have helped me along the way. There are so many people out there that helped make this happen and it feels really good to finally win it, it’s been a long time coming.’

‘It’s been 10 years ago I was in the youth class, and it’s pretty cool to come up and be the champion,’ added Mullins. ‘When I started racing it was just me and my dad and my uncle just coming out on the weekends, just spending time with the family and having a good time. I really never thought it would progress to this, it’s something I’ll always remember.’

Photo By: Shan Moore
Paul Whibley rounded out the podium.

Mullins put on an incredible display over the extremely rugged 12.5-mile course, while Kailub Russell, Cory Buttrick, Paul Whibley, and Josh Strang locked up in an intense battle for the runner-up position. Strang washed out on the loose rocky start, sending him to the back of the pack early on but the defending champion pushed his way to fourth, just behind Buttrick and Whibley. Unfortunately, Strang hit a set of tree roots that sent him to the ground and furthermore added to his string of bad luck in 2011, as the Aussie superstar’s day ended abruptly with a leg injury. JG Off-Road/GEICO Honda’s Jimmy Jarrett volunteered to end his day as well, along with XC2 racer Cody Gragg – who both stopped to assist the injured Strang in the woods.
Buttrick ran a solid second for the first half of the race after rolling off a season-best second place on Friday, but unfortunately Buttrick pulled out of the race with an injured hand. WMR Racing/Clockwork/Planet Fitness KTM’s Nate Kanney ran into mechanical issues in the final round of racing and the fifth place racer pulled off early on.

Russell took over second after his FMF/KTM teammate Buttrick dropped out and after that, the Pro class rookie never looked back – ending the race with nearly two minutes to spare over the seasoned Whibley.

‘I was pretty upset on Friday because I threw second away twice,’ said Russell. ‘Today I knew I could turn things around and I started off well, I was right behind Charlie and Paul after the start. Charlie made a little mistake and I got around him and then I hit a root and flipped over the bars and hit my head. It knocked me silly for a minute, but I got going and ended up catching everyone back and making the pass for second.’
Whibley, who won Friday’s round, wasn’t able to put in another win on the weekend, but the Kiwi managed second place in points after an arguably rough start to the 2011 season.

‘The track was really rough today and we had a few set-up issues, the bike wasn’t working as good as it was Friday,’ said Whibley. ‘But it’s good to finish the year where we did, considering the problems we had at the start of the season.’

Australian off-road star Toby Price finished fourth in just his second GNCC race of the season, while Jesse Robinson finished fifth, filling in on the factory Beta team for the injured Chris Bach.

Holeshot specialist Jedehiah Haines was sixth on a Kawasaki, beating out JG Off-road/GEICO Powersports Honda’s Scotty Watkins for the spot.

Meanwhile, 2010 National Trials Champion Cody Webb was eighth on another factory Beta.
Rounding out the top 10 were Kawasaki rider Eric Bailey and Kenny Gilbert on a KTM.

Andrew DeLong claimed his first-ever XC2 victory after an epic battle with his FAR Husqvarna teammate Jason Thomas and Obermeyer Yamaha/Raines Riding University/OffroadViking.com’s Jordan Ashburn. Ashburn took the early lead after grabbing the $100 Motosport.com Holeshot Award, however, DeLong and Thomas soon hooked up in a fierce duel that eventually carried them past Ashburn and into the lead. For the next several laps, DeLong and Thomas traded the lead several times, with Thomas holding the upper hand going into the final lap. However, DeLong was not to be denied and made a spectacular pass just before the motocross track to take the win.
‘It feels good to get this win under my belt,’ said DeLong. ‘Jordan kind of checked out on us early, and then me and Jason started rolling and we just put the hammer down and caught him.’

Thomas, who, remarkably, was riding with a plate and several screws in his hand after breaking it before the Ironman GNCC, held on for second with Ashburn taking third.
KTM’s Steward Baylor Jr., who wrapped up the XC2 title on Friday, finished fourth after drowning out his bike in one of the water crossings.

After graduating from the Youth ranks just last year, Fairmont, W. Va. racer Layne Michael turned in a herculean effort to finish ninth overall, earning him the honor of Top Amateur for the first time in his rookie season. Open A’s Adam Bonneur put up a good fight, though, contesting the young rider for that top honor throughout the three-hour race.

In the A.M. race, Husqvarna rider Andrew Powers claimed his first overall win of the year, and topped the 200 C (16+) class, as well. Masters A (50+) winner Randall Riggs was second overall on a Yamaha, with KTM rider Cameron Hicks taking third overall and second in the 200 C (16+) class.

In the Vendor’s Challenge 5 (VC5), a class specifically for GNCC Vendors and Sponsors, it was Dick Burleson who led Team Moose Racing to the victory, followed by Jeff Northrop of FMF in second and Shane Nalley of Suzuki Off-Road who rounded off the VC5 podium.
KTM’s Maria Forsberg topped the Women’s division with a fourth overall finish, while Mark Patterson was fifth overall and second in the Masters A (50+) division.