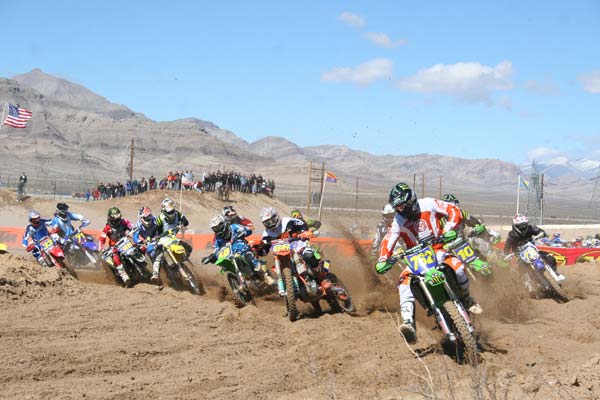 Justin Soule got the holeshot with Kurt Caselli close behind.

KTM’s Kurt Caselli passed Monster Energy Kawasaki’s Justin Soule 1/2-way through the first lap of WORCS round 2, immediately gapped the field and led for the next two hours to take the win and points lead. “It was kind of a boring race for me,” said Caselli. “Because I rode by myself all day, but boring is good when you’re in the lead. My KTM was perfect, the course was fun and it’s always a good day when you win.”

Caselli was amazingly fast all day.

Caselli also gave props to Soule who finished second. “Justin was riding great,” said Kurt. “I’m just glad I was able to keep a gap between us.” Soule got the holeshot and let Caselli by when Justin bobbled partway through the first lap. He then did battle for the next two hours with Kyle Summers, Mike Brown, and Ricky Dietrich to take a well-earned second. “I was riding hard all day,” said Soule. “I had a good battle going with Dietrich, but he finally dropped back and I tried to catch Kurt, but he was too fast for everybody today.”

Justin Soule is loving his Kawasaki. He held off Ricky Dietrich for second overall.

Dietrich took third after coming from last on the dead engine start. “It took three kicks to fire and everybody was gone by then,” said Dietrich. “It took me a while to work through the pack and by the time I caught Soule I was dehydrated and he was riding really well. I got past him once but couldn’t hold it.”

Dietrich was jet-lagged from his Argentina race and then dehydrated on the high desert course. He comes from last to third.

Fourth place went to JCR Honda’s Timmy Weigand. Oddly, Weigand finished fourth in points in 2009, took fourth in round one, and had the fourth fastest qualifying time in Saturday’s timed practice session. “I’m sick of fourth place,” said Timmy. “I want to get up on the boxes!”

JCR Honda’s Timmy Weigand and Zip-Ty’s Bobby Garrison battled for fourth during the last 1/2 hour. Timmy got the spot and Bobby G. settled for fifth on the Husky.

Zip-Ty Racing’s Bobby Garrison fought his way up to fifth and challenged Weigand for fourth. “I passed Timmy through the timing chute, but I thought it was the last lap,” said Bobby G. “I’d already given it all I had in the tank and then we got the white flag. I had nothing left and Timmy got by me and I couldn’t catch him again.”

Mike Brown was on his way to another sure podium when his transmission locked up. Brownie coasted into the pits for a DNF.

Brown ran as high as third before his tranny went south and he was forced to pull out. Summers crashed hard and pulled off with a concussion. And round one winner Taylor Robert is out for four months with injuries to his right knee.

Ryan Abbatoye took the Pro 2 win and is now tied for the points lead.

AMA/ KENDA National Hare and Hound Series: Round 3, King of the Desert!