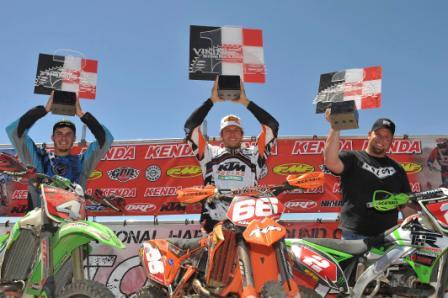 “The race was pretty challenging today,” remarked Caselli. “It was hot and incredibly dusty. Luckily, I got out front early and was able to get away from a lot of the dust and just focus on riding a solid pace to take the win.”

Caselli earned the holeshot at the end of the bomb and never looked back. He reported that the second loop was technically demanding and made the course fun. He went on to lead the entire race and took the win over David Pearson by 4 minutes and 45 seconds.

“My bike was running great today,” stated Caselli. “We were able to incorporate some testing for the Baja race into today’s event by trying a different set-up on my bike. I really like it and think it might be something that we can use for the upcoming SCORE/Baja 500. The Hare & Hound Series and the SCORE Series have a lot of similarities and I am glad we are able to find ways to incorporate some of the testing sessions into these races.”