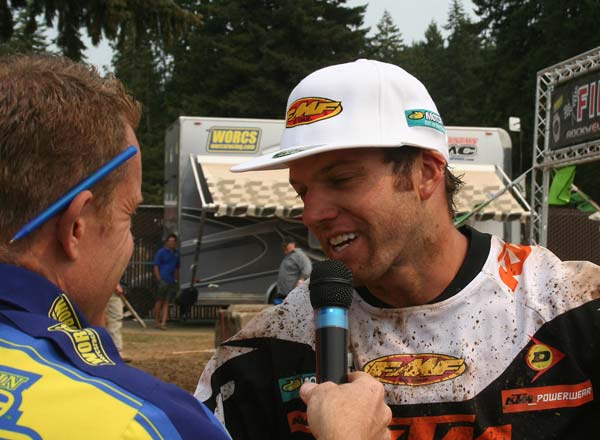 8/1/10, Olympia, Washington: FMF/KTM’s Kurt Caselli put on a display of speed, skill, and endurance to top the all-star competition at WORCS round seven. In the process, Caselli took over the points lead from Monster Energy’s Ricky Dietrich for the coveted WORCS Championship.

Hare & Hound hero Destry Abbott took the holeshot on the Hare Scrambles style dead-engine start with Dietrich close on his tail just ahead of Brenden Ritzman. Caselli gated well (for him) coming off the line in the top five. Defending WORCS Champion Mike Brown was mired mid-pack but would make his presence known before long.

Destry Abbott took the holeshot ahead of Ricky Dietrich.

Abbott, who’s had a string of bad luck and injuries in 2010 including getting struck by lightning last week while out training in Arizona, lead for most of the first lap before gallantly waving the title contenders by. That put Dietrich in the lead with Caselli (who was already on the move) in second. Ritzman made his way past Abbott, but the pair of Dietrich and Caselli were clearly already gapping the field intent on having their own race.

Dietrich, as is his habit, started laying down faster and faster laps to extend his lead over the course of the first hour. But Caselli wasn’t waiting until the second hour to start his charge, as he continued to slowly close on Dietrich lap after lap. Caselli made the pass to take over the lead just after the first hour tolled. The battle of former WORCS Champions (Dietrich 2006 Champ, Caselli 2007 Champ) continued but Caselli was clearly unbeatable this day as he took the win by almost one minute with Dietrich second.

Dietrich took second and is one point behind Caselli in the title chase.

“I got into second behind Ricky,” said Caselli. “He was putting in some fast laps early so I just paced him for a while before I really started pushing. Then I went after him and got by him in the pits. From then on I just rode hard and enjoyed the Washington woods. There’s a lot going on in this course, it’s a lot fun. It’s always a good day when you win.”

Dietrich was happy with second, but never likes to lose.”Kurt rode great today,” said Dietrich. “I wanted to beat him here, but it didn’t work out. But we’ll be back here again next week and I’ll just have to take round eight for the win.”

Mike Brown rode the wheels off a 250F to come from behind and take the final podium slot.

As good as the battle for the lead was, the fight for third was incredible. Mike Brown fought his way from the back of the pack to take the final podium spot after a race-long game woods-war with Justin Soule. Nathan Woods fought his way into fifth just ahead of Ritzman in sixth. JCR’s Colton Udall came from way back to take seventh just ahead of Gary Sutherlin in eighth. Abbott finished ninth and Kevin Rookstool rounded out the top ten.

Justin Soule has two podiums this season, but is still looking for his first WORCS win.

Battle of the Champs – Kacy Martinez is the defending WORCS Women’s Pro Champion and the point’s leader for the 2010 WORCS Women’s Pro Championship. Maria Forsberg has clinched the 2010 GNCC Women’s Championship. The two friends raced against each other for the first time this year at WORCS round 7 in Olympia Washington. Martinez lead most of the race with Forsberg on her tail until the white flag, when Kacy bobbled and Maria got by. They banged bars all the way to the checkered flag where Forsberg took the win by a wheel. Look for a rematch this coming weekend at WORCS round 8 in Washington.

JCR’s Colton Udall came from the back to take seventh. The rookie sits fifth in the point’s chase.

Caselli holds the points lead by one over Dietrich – Caselli 154/2 wins, Dietrich 153/3 wins. Brown is third in the title chase with128/1 win ahead of Soule with 121. With three rounds remaining the dogfight for the WORCS Championship continues in less than a week with round eight in Olympia Washington on August 8th 2010.