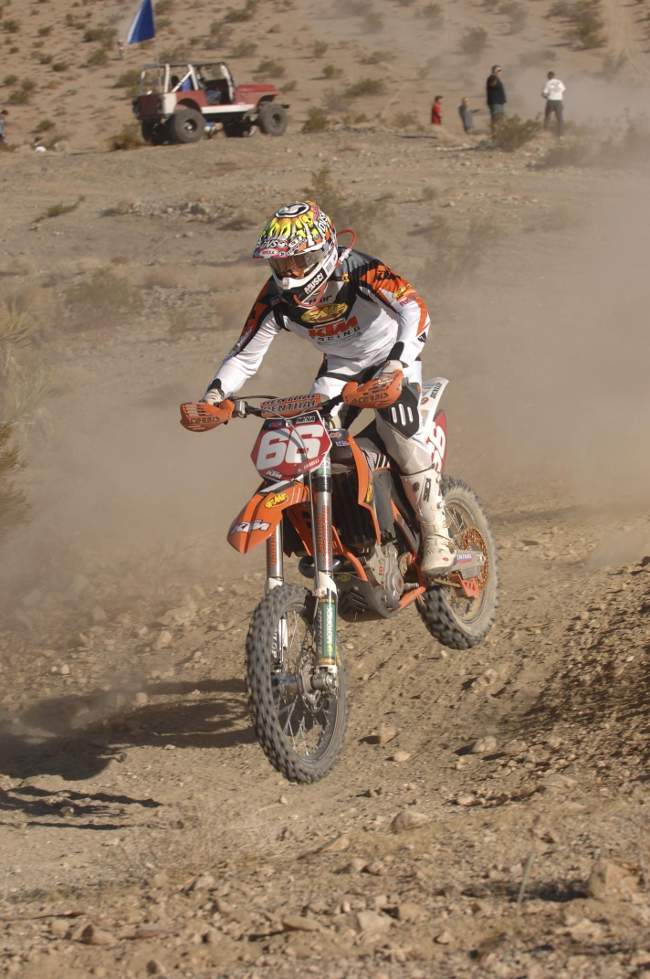 Share FacebookTwitterGoogle+ReddItWhatsAppPinterestEmail
Johnson Valley, CA – Factory FMF/KTM rider Kurt Caselli was crowned the 2011 AMA National Hare & Hound Champion, a title he was able to wrap up one round early after finishing second overall at this weekend’s event.
Caselli got off to a third place start at the beginning of the race. He quickly moved into second position behind early leader Kendall Norman. “I knew going into this race that I just had to finish ahead of David Pearson and I would be able to win the championship, so my goal was to ride my own race and focus on making no mistakes and staying ahead of David,” remarked Caselli.

Caselli remained close to the lead ride of Kendall Norman throughout the entirety of the race but was unable to make a pass. “Every time I closed in on Kendall the dust would get so thick it was impossible for me to pass without taking a big risk of crashing. I didn’t want to take those chances knowing the championship was on the line,” stated Caselli.

The KTM rider went on to finish second overall for the day approximately 30 seconds behind Norman. His second place result secured him the championship title for the 2011 season. Destry Abbott went on to finish third, Jacob Argubright fourth and David Pearson in fifth place.

“We are very proud of Kurt,” commented Factory FMF/KTM Team Manager Antti Kallonen. “He has worked very hard this season toward winning this championship and we are excited that he is able to win one round early. This is his first full year commitment to this series and it is great to see him walk away with the title after just one season.”

WHIBS AGAIN, EIGHT IN A ROW AT THE OMA!