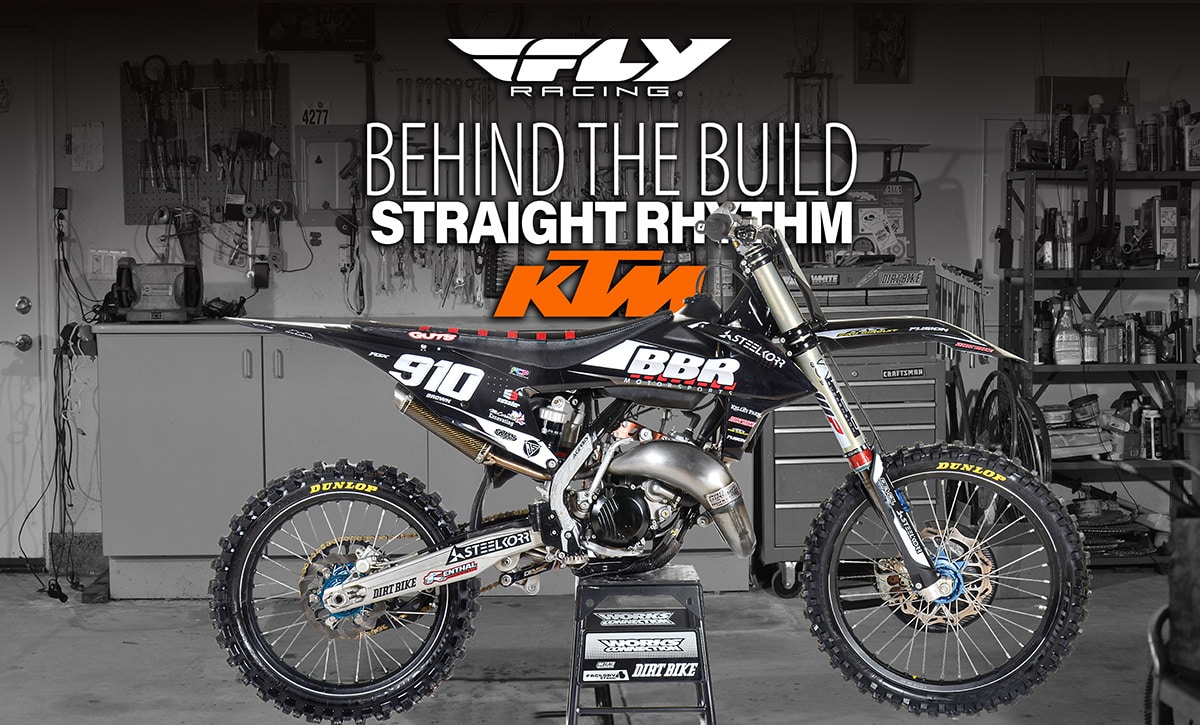 Test rider Carson Brown can ride anything just about anywhere and somehow go insanely fast. We have seen this on many occasions working with him on a variety of different project bike builds. During one day of filming last year, Carson tested Hondas from three different decades, and the only reason he stopped riding was because it got dark on us. We have video proof on our YouTube channel. So, when Carson called and said he was racing the small-bore class at this year’s Red Bull Straight Rhythm, we jumped at the chance to work with him on a build. That’s when it got interesting!

Normally, we build one project at a time for a specific purpose, but this time Carson and his dad Duane Brown of BBR Motorsports decided that a two-bike project was in order. Carson had a very successful West Coast Supercross season with the AEO Powersports KTM team and had a KTM 150SX sitting in the garage collecting dust. Headed into the 2022 season we had a cool idea for Carson to race the West Coast Supercross series on a Yamaha YZ125, so we decided to merge the two projects, because why not? Red Bull Straight Rhythm is a combination of drag racing and Supercross, so if Red Bull could do it, so could we.

Every build has its challenges. We had a pretty solid, straight-forward plan for everything. Our 2022 Yamaha YZ125 test bike made a short trip over to Mitch Payton and the crew at Pro Circuit for some horsepower upgrades and suspension modifications. The 2019 KTM 150 was at the Brown compound in the Pacific Northwest under a mountain of cobwebs. No problem, right, just clean those away and let’s go racing? All jokes aside, the KTM engine had already received the Pro Circuit treatment, so only a refresh would be needed in this department; we just needed to figure out the suspension.

So, did we mention Yamaha’s YZ125 was completely revamped for 2022? Significant engine changes, brand-new styling and a redesigned intake were made. This is definitely something that was not addressed in our brainstorming stage. Prior to this, the YZ125 platform hadn’t seen any major changes for years. After doing some more research it was clear our initial idea of a big-bore on the YZ125 went up in smoke. We didn’t have the time to send the cylinder out, and no one offered a bolt-on kit for the new engine configuration, so this was no longer an option. Good thing for us Mitch Payton is always up for a challenge. He made some calculations in his head and went to work in the Pro Circuit engine department. With no major changes made to the Yamaha suspension or chassis setup, the Pro Circuit suspension department’s job was relatively easy. After years of testing, they have a wide variety of proven settings. All they had to do was make sure Carson was comfortable with some clicker adjustments.

Switching back to the KTM, we literally had the opposite issue. The engine package was set in stone. Pro Circuit had previously built it and made an exhaust to match. So, after freshening up the top end and updating some jetting specs, it was ready for action. Suspension, on the other hand, was an issue. The OEM air fork had some internal problems that couldn’t be fixed. Lucky for us, Jeremy and the crew at AEO Powersports had worked with Carson during the Supercross season and had a baseline setting for him. After some very persuasive conversation that some might consider begging, we had a WP Pro Component cone-valve fork and OEM shock done up for Carson that was ready for testing.

With both bikes built, we headed to some local SoCal Supercross tracks for testing. Carson loved the handling and overall setup on the Yamaha immediately. Carson’s mind was made up—he was going to race the YZ125. We actually had to talk him into testing the KTM, and reluctantly at the end of the first day of testing he finally gave in.

Within a few laps we noticed that his lap times had dropped, and he was able to put rhythm sections together that he couldn’t previously. Carson spent day two of testing hopping back and forth between the two bikes, trying to figure out why. He was comfortable on both bikes, handling-wise, having no complaints on either. Power-wise, he felt like the Yamaha was very easy to ride with strong power throughout. He just had to keep it in the revs, but the KTM just seemed to have a little more everywhere. This made perfect sense.

Even with Pro Circuit working on both engines, the KTM starts with 25 more cc, and that just means more power. In the racing world, a popular saying is, “There is no replacement for displacement,” and in the end, the decision was made to race the KTM at the drag-racing-style event. Carson dominated the small-bore classification at the 2022 Red Bull Straight Rhythm on his BBR Motorsports, Pro Circuit and AEO Powersports-backed machine.

THE WEEKLY FEED: BLACK FRIDAY SPECIALS! • IS TRAIL RIDING IS GOOD FOR THE BRAIN? • HAPPY THANKSGIVING!