PRODUCT: The guys at Canvas gear are approaching the motocross gear business with an original concept. Instead of trying to guess what designs and trends their customer will respond to each season, they are allowing their customers to do all the design work. You can basically design your own riding gear with whatever logos you choose and order whatever quantity works best. This all started as a sponsorship package for Michael Leib’s struggling supercross career in 2016. The idea was that he would sell a sponsor-me package for each round of the Western Regional Supercross series. Michael had a history of top-10 finishes and he understood that asking a small sponsor to underwrite an entire season was cost prohibitive. A single round was much more affordable, and he would design riding gear around each sponsor. The idea earned some attention, but getting custom riding gear quickly and affordably was problematic.
A few years later he founded Canvas with the quiet support of his brother-in-law Ryan Villopoto. The key component to the venture is having a factory in the U.S. where they can provide quick turnaround and oversee quality. Everything is manufactured in Southern California. U.S. customers normally take two-to-three weeks for delivery. 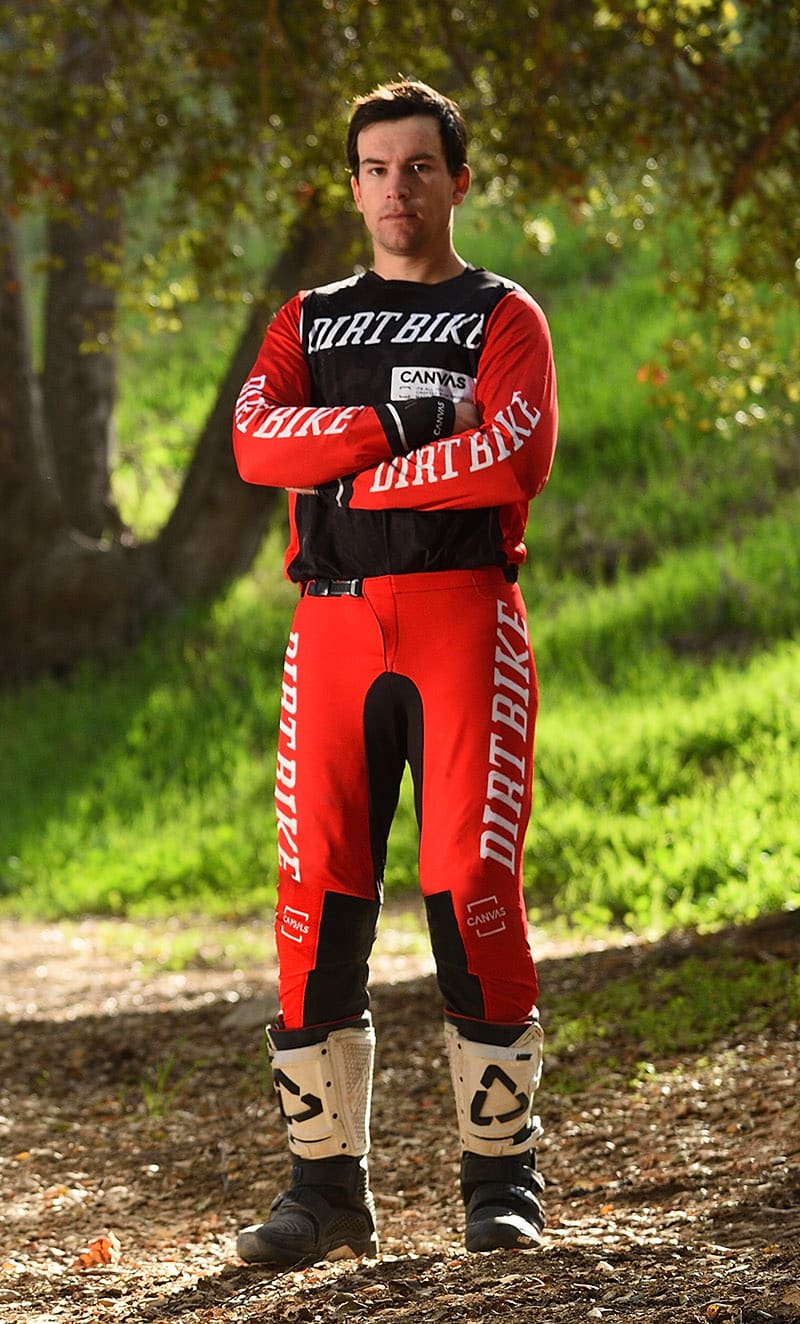 OUR TAKE: We went through the process to see how difficult it is to make a design, starting on the CanvasMX website. You start with a blank canvas (so to speak) and you can change colors of various panels in the pants or jersey. Then you add logos and artwork. Canvas has some logos already available, such as AlpineStars. To use some others you might have to obtain written permission. Some companies simply will not allow the use of their copyrighted logos–virtually all energy drinks fall into this category. The website is actually quite sophisticated and very easy to use. It’s kind of fun to see your design right on the screen as you make it. We still would recommend picking up the phone and having them look at your designs before you add-to-cart. If the artwork you upload is crummy, they will give you an honest opinion.
The product itself is typical of modern MX gear. There aren’t many bells and whistles, but the gear is very lightweight and comparatively well made. The main innovation here is the fact that you can have riding gear that is truly unique rather than off-the shelf stuff. Pricing is reasonable. The base price for a single set of riding pants is $205. A jersey is $76. The price goes down as the quantity goes up. If you order 10 units, it’s worth about 10 percent off, and so on. You can also have casual wear made. It’s a fantastic service.
CONTACT: www.canvasMX.com