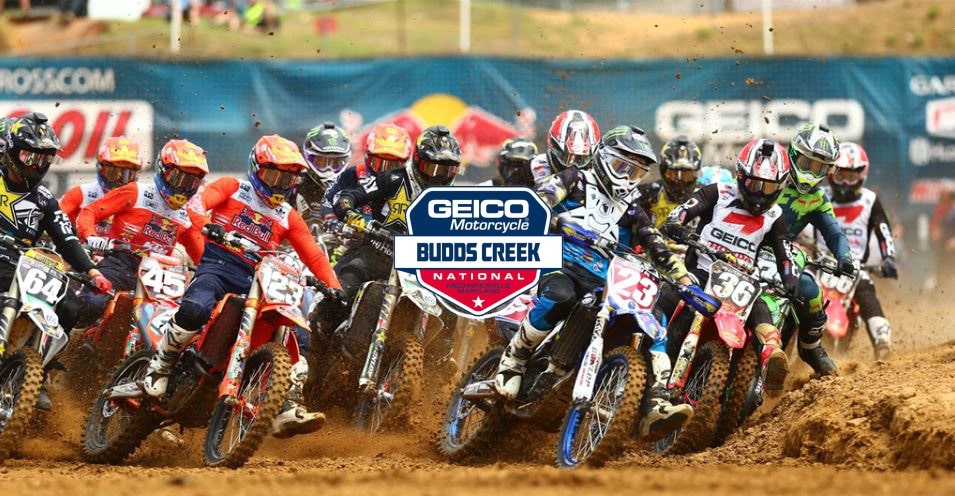 Aaron Plessinger wrapped up his first 250 National Championship at Budds Creek this weekend by winning the first moto in commanding style. The stress of a full season of excellent performances came to a head in the second moto when it was all he could do to finish 11th. That opened the door for RJ Hampshire to take his first-ever moto win and his first overall. Meanwhile, the 450 seemed to belong to Ken Roczen after he won the first moto ahead of Marvin Musquin and Eli Tomac. But the second race saw Tomac make another of his almost supernatural late-race charges to take a victory that had seemed lost. The points chase is still tight enough to go to the final round next week at the Ironman.

The start of Moto 1 saw Aaron Plessinger take the holeshot ahead of RJ Hampshire and Mitchell Harrison, while Alex Martin and Dylan Ferrandis were outside the top 10 and a crash put Justin Cooper even further back.

While Plessinger had no trouble stretching out his lead, Martin struggled to claw his way through the field. After 10 laps, Plessinger had built a nine-second lead and Martin was still back in 11th. With less than five minutes left on the countdown clock at that point, it was clear the series wouldn’t have to wait much longer to crown its champion.

For the ninth time this season, Plessinger grabbed the moto win, mathematically clinching the 250 Class championship in the process. Hampshire held on to finish second, with Forkner in third. Harrison took fourth place for the third straight moto, and Dylan Ferrandis rounded out the top five after making a last-lap pass on Jordon Smith.

Plessinger took the holeshot again and led the opening laps of the race, but before long he was passed by RJ Hampshire, then Chase Sexton. Then Plessinger crashed all by himself and fell back to 10th place.

After getting past Plessinger, the Honda teammates put a large gap on the rest of the field. Behind them, Forkner and Mitchell Harrison engaged in a back-and-forth battle for third. Toward the end of the race, Harrison made a pass stick as Forkner went off-track. It took Forkner a little while to get back onto the track, causing him to lose several positions.

Up front Hampshire finished ahead of Sexton to score the first moto win of his career and, with 2-1 finishes for the day, the first overall win of his career as well. Hampshire is the ninth different rider to win a moto in the 250 Class this season. Cooper ended the race in third place and Martin took fourth after passing Harrison on the final lap. Sexton (7-2) and Plessinger (1-11) narrowly edged out Harrison (4-5) for the two podium spots behind Hampshire.

Marvin Musquin grabbed the holeshot ahead of Ken Roczen and Justin Barcia, but Eli Tomac was outside the top 10. Tomac, he made a number of quick passes to move himself into seventh before he started to encounter heavier resistance.

Roczen caught Musquin by the end of the first full lap and was able to take over the lead. Eventually, Tomac got Nicoletti for fifth place, followed by Jason Anderson around the midway point for fourth place.

Roczen and Musquin had both pulled away from the rest of the field as the race drew to a close. While this was going on, Barcia and Tomac were locking horns in a battle for third place. By the time Tomac got around Barcia on Lap 12, the top two were about 19 seconds clear of him.

In the end, Roczen pulled a 13-second victory and his second moto win of the year, while Musquin (second place) would have to settle for only picking up two points on Tomac (third place). Anderson and Blake Baggett, who fell earlier in the moto, both made late passes of Barcia to finish inside the top five. Barcia finished behind them in sixth.

Phil Nicoletti took the holeshot but by the end of the first lap, he’d dropped spots to Marvin Musquin, Justin Barcia and Ken Roczen. Roczen passed Barcia about five minutes into the moto, then went around Musquin to move into the lead shortly before the midway point of the race.

Meanwhile Tomac was charging through the field. After getting around Nicoletti and Baggett, he closed in on Barcia for third place. Barcia fell, then Tomac went on a tear in the final ten minutes of the race. Tomac used an outside line to make quick work of Musquin and four minutes later, he passed Roczen for the lead without too much of a struggle. Tomac immediately began to gap the field once he had the lead. Then Baggett started making a charge of his own. He picked off both Musquin (which helped Tomac pick up a few extra points) and Roczen (which swung the overall victory from Roczen to Tomac) to earn his best moto result of the season, a second-place finish behind Tomac. Roczen, Musquin and Barcia rounded out the top five.

Roczen (1-3) tied Tomac (3-1) in points for the day but lost the tiebreaker (better Moto 2 finish) to Tomac. That put Roczen second overall, and Musquin (2-4) rounded out the overall podium ahead of Baggett (5-2).

Despite a fourth-place finish in Moto 1, Jason Anderson did not line up for Moto 2.

THE WEEKLY FEED: MARK BLACKWELL IN THE DEZ, MORE ON THE INCREDIBLE KTM 500XCF-W