BRANDY RICHARDS AND THE PERFECT SEASON: THE WRAP 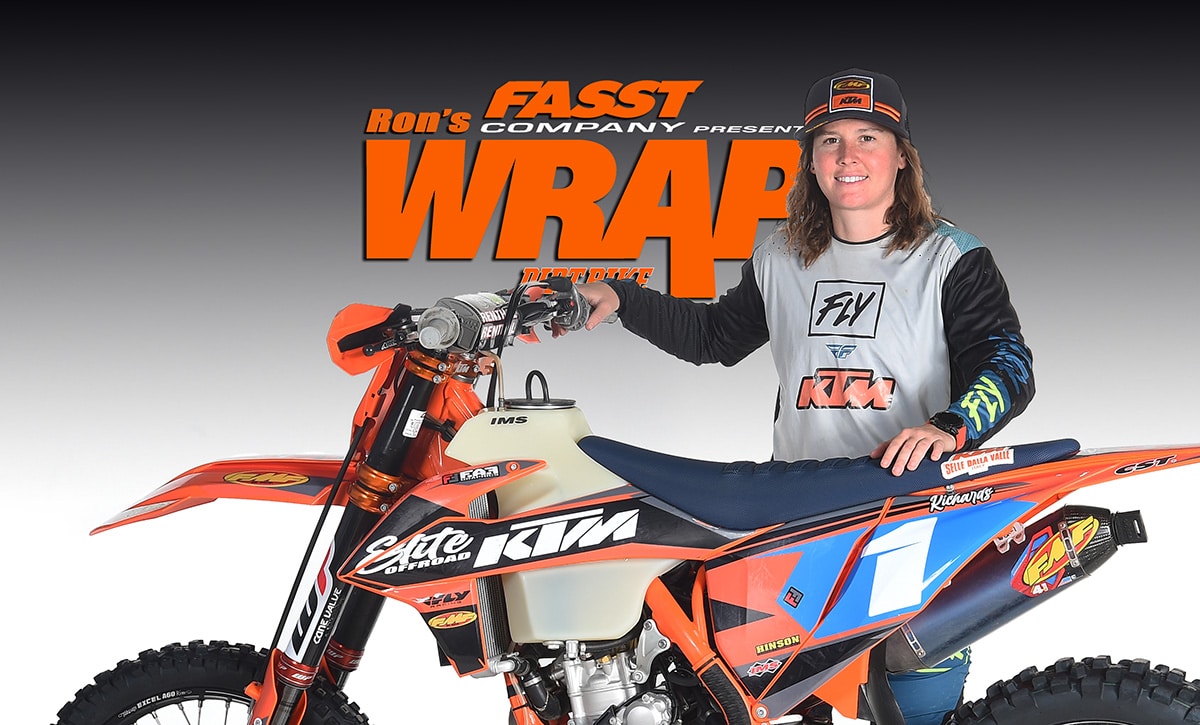 Brandy Richards had a season that most riders can only dream of. In 2021, she won every Women’s Pro race in the WORCS series, just as she had since 2017. She also won every race she attended in the 2021 NGPC series, and she topped it off by winning every day and every single special test in the Women’s Trophy Class at the ISDE in Rivanazzano Terme, Italy. That’s several steps beyond perfection. We asked her about her incredible accomplishments of 2021.

DIRT BIKE: YOU HAVE HAD SOME OTHER PRETTY GOOD SEASONS BEFORE THIS, RIGHT? TALK ABOUT 2019.
BRANDY RICHARDS: At the ISDE in 2019, I won five of the six days, but I had one test on day three or four where it was super slick. I fell over and couldn’t quite get going again. I was spinning and spinning. I lost about two minutes and it put me behind for the whole week. So winning five out of six but still not winning the class was pretty memorable.

DB: WHAT WERE YOUR GOALS GOING INTO THE 2021 SEASON?
BR: WORCS, in the Women’s Pro class, but also competing in their new Pro Am class. Then winning Big 6 (NGPC) for the second year, but honestly, the ISDE was my main focus. That’s what I thought about all year long. I did a lot of traveling back east to prepare for it.

DB: HOW MANY ISDEs HAVE YOU ATTENDED?
BR: This was my fourth. Four years ago, Antti Kallonen (U.S. ISDE Team Manager and KTM Director of Off-road Racing) wanted to put together a U.S. Women’s team for the ISDE to win the Women’s Trophy. I think it was Tarah Gieger who recommended me. He messaged me to see if I wanted to go. I couldn’t get a bike from Yamaha at the time, so he offered to help me out. That’s how I got connected with Antti and KTM.

DB: WAS THAT YOUR INDOCTRINATION TO OFF-ROAD RACING?
BR: I grew up racing WORCS a little, but I focused a lot on motocross back then. When motocross for women was kind of dying off, I started looking to focus more on off-road. Now I’ve completely left motocross behind. I tried to do it a little, but there wasn’t much publicity in it and there wasn’t any support in it. Now there’s no more series for Women Pros. I still do Mammoth every year but that’s the only motocross I do.

DB: SO HOW DID 2021 START FOR YOU?
BR: I fell a half lap into my first race in January and got a small fracture in my wrist. It hurt, but I finished that race, and then rode the Pro race on Sunday. On Monday I went in and got an X-Ray that showed a little fracture. I had to race again in two weeks. I wore a brace for two months.

DID YOU HAVE MORE INJURIES?
My hand. At the NGPC race at Glen Helen in March, I went down in unclassified and broke a few bones in my hand. I didn’t really tell anyone about that. But that sucked.

AND THEN YOU BROKE SOME RIBS?
Right. That was when I started going back east to prepare for the ISDE at some Sprint Enduros. It was a muddy one. It was the last day of the last test and I fell on these tree roots. I landed on my back and ended up breaking a couple of ribs.

HOW MUCH DID YOU RIDE IN THE EAST?
I did two Sprint Enduros and we had our ISDE training camp back there at the Shoals in South Carolina, as well. That helped a lot going to the east and riding, just getting used to riding in the trees. That’s my biggest issue.

DID THE RIDING IN ITALY SUIT YOU?
It did because it was super dry and slick and more high speed. I would say it’s the most high speed ISDE I’ve done yet. The tests were fairly fast.

WERE THERE ANY WOMEN IN RACING WHO INSPIRED YOU?
When I was a kid, I really looked up to Kelly Yancy. She was the premier off-road women’s racer.

WHAT WILL YOU BE DOING IN 2022?
I’ll be racing the same two series; WORCS and NGPC. And I’ll also focus on ISDE again. I’ll be trying some GNCC and some Sprint Enduros. And I’d like to ride more on the east coast. I know the ISDE will be in France, so that might be helpful.