Ricky Brabec has turned around his misfortunes of week one and has been riding flawlessly in the second half of the Dakar Rally. He won stage 10, jumping up to second place overall, just 51 seconds behind his Honda teammate Kevin Benavides. The event has reached a point where fatigue is taking a toll and riders are making costly mistakes. Today, Jose Ignacio Cornejo, who had been leading the rally overall, crashed hard and suffered a concussion. He finished the stage, but withdrew from the rally afterward. It was another excellent day for Skyler Howes, who climbed up to fifth overall by virtue of a fourth-place finish. Tomorrow, Thursday, sees the longest scheduled special of the 2021 Dakar. The stage will include some 511 kilometers against the clock and barely 50 kilometers of link stage. The new bivouac will be situated in Yanbu. 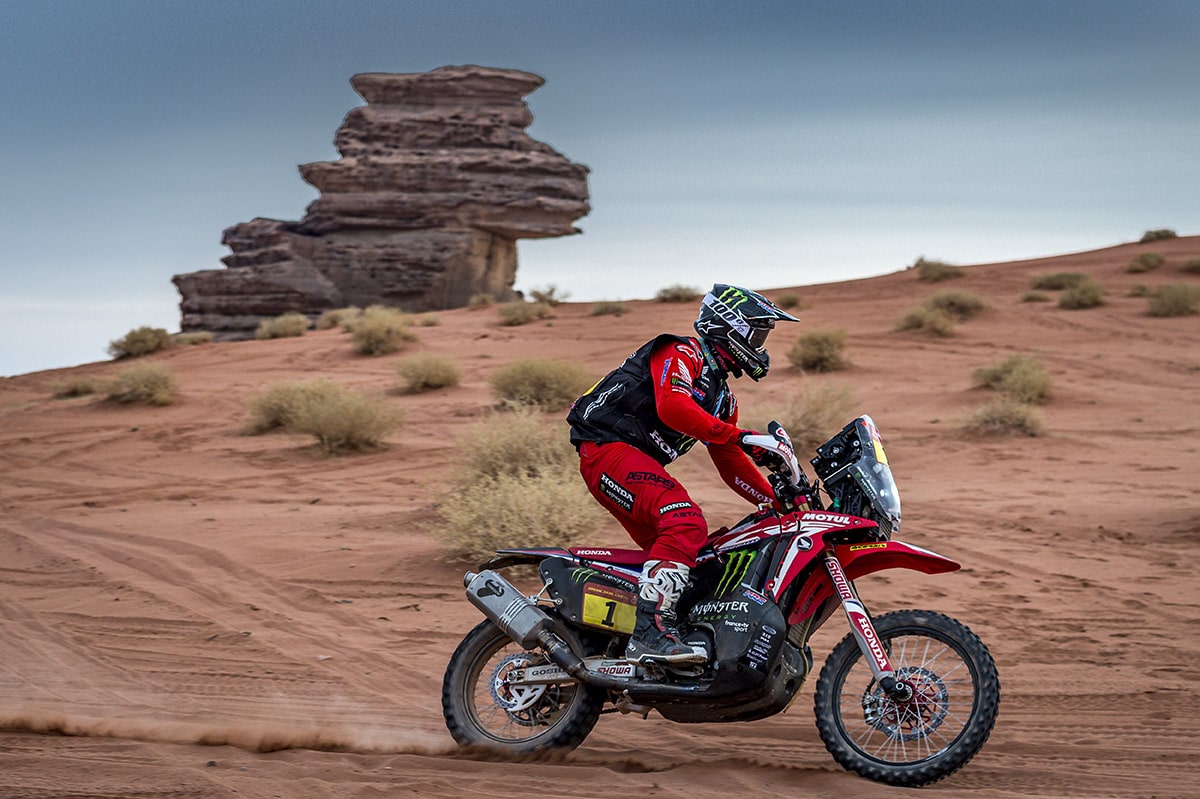 Ricky Brabec: “Today definitely was a good day, but it was unfortunate for our teammate Nacho Cornejo. We heard that he crashed, but finished the stage and they ended up taking him to the hospital. It’s unfortunate for him, but he’s OK and he made it to the finish-line. That’s always a plus. Today was fast with some traces from yesterday and some from last year. My teammate Kevin at kilometer 75 went off the roadbook a bit and got confused, so I took over from there opening the whole way until the end. I was thinking all day about a strategy, to try and sit back a little and set myself up for tomorrow, but the other guys were a little bit off the pace and too far behind. I didn’t want to sit back and wait for six minutes, so I decided to bite the bullet and push all day. Tomorrow I will open the stage. I’m very lucky to have my team-mate Joan and Kevin behind me. Unfortunately, if they catch me, I’m going to lose time tomorrow, but it is what it is. We’ve put in one hundred percent and have given it everything. Hopefully in the end everyone will be happy. Anything less than winning will be unacceptable. We’ll do our best and try and make it to the end on top. It would be great to get all the Hondas on the box, but if we get on top, that will be the ultimate. But the situation I’m in for stage eleven is not bad, but it’s not going to be easy. They’ve made it tough this year and the boys have made it tough too. I’ll try and do my best.”

Skyler Howes: “A fun day ripping through the desert. A lot of rocks and tough navigation again today. Learned my lesson yesterday and stayed on top of the roadbook and had a much better time. Caught up to a couple of guys and had a solid group ride for most of the stage. The dust was killer but got some fresh air for the last bit and brought her on in. Got a long day in the saddle tomorrow with one of the longest stages with dunes.”