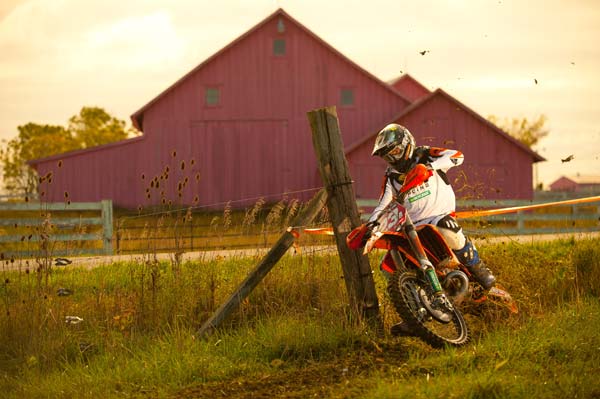 Upland, Indiana, Oct. 1, 2011 – Russell Bobbitt clinched his fourth National Enduro title with a dominating performance at the final round of the Rekluse/AMA National Enduro Series in Upland, Indiana. The Georgia rider came into the Indiana round with a slim, one-point lead in the series standings over FMF/KTM teammate Charlie Mullins in a showdown that would see the title go to whichever rider finish ahead of the other. Bobbitt, however, quickly separated himself from Mullins and the rest of the competition by winning the opening test by 13 seconds over Mullins. Bobbitt went on to win all five tests of the 65-mile race and claimed the overall win by 58 seconds over Mullins.

“It feels great to win the title, I definitely worked hard all year for this and it paid off,” said Bobbitt. “There was a good variety of terrain here in Indiana, and I felt good all day. I came in prepared for this, I did some testing in similar terrain and my mechanic Tanner Harding worked hard to give me a great bike and this just worked out for us.”

Charlie Mullins ended up a very close second in the series chase.

Factory Husaberg rider and eight-time series champ Michael Lafferty rounded out the podium, just nine seconds behind Mullins, while KTM rider Shane Hufford Jr. grabbed his best-ever finish with a solid fourth. Am Pro Yamaha’s Thad DuVall was fifth, with KTM riders Zach Klamfoth and Hunter Williams taking sixth and seventh.  The win marked Bobbitt’s fourth time to top the podium this year and it gave him the championship title by four points over Mullins, 239 to 235. Nick Fahringer, who missed the Indiana round after having knee surgery, finished third on the year having won three-straight rounds, while FMF/KTM’s Cory Buttrick (out with a concussion) was fourth overall ahead of Lafferty.