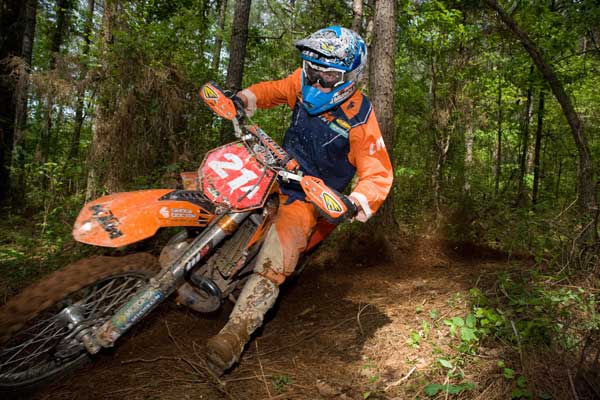 Having lost two-straight rounds to his Muscle Milk/Shock Doctor KTM teammate Michael Lafferty, Russell Bobbitt got back on track with a resounding victory at round five of the AMA/Rekluse National Enduro Series held near Westpoint, Tennessee. Bobbitt, the defending series champion, topped Lafferty by nearly three minutes at the finish of the NATRA-organized event, winning five of the six sections making up the 78-mile race. This year’s series has been all about shifts in momentum and today’s win leaves Bobbitt in the driver seat as the series enters a six-week break before heading westward.
“This was a good win for me,” said Bobbitt. “It gave me a little breathing room before the gap in the schedule.”
Bobbitt attributed his domination to bike set-up, having spent the week pervious to the race testing at a friend’s house in Birmingham, Alabama, which happens to have terrain similar to that found at the Westpoint venue.
“We went back to a more original set-up for this race and it was definitely a good decision,” said Bobbitt. “The bike felt a lot better and that gave me confidence… when I have confidence I ride well.”
Lafferty had been on a roll heading into the Tennessee race after winning rounds in Florida and Louisiana, but the eight-time champ simply had no answer for Bobbitt at this one.
“It just got beat plain and simple, and I really don’t have any excuses,” said Lafferty. “Russell rode a heck of a race and I was pretty much battling for second all day.”

Claiming his best-ever enduro finish was Yamaha’s Jason Raines. The five-time National Hare Scrambles Champion even moved into second ahead of Lafferty at the midway point of the race, but a late-race push by Lafferty dropped Raines to third by the end of the event.
“I have been struggling at the start of these races and coming on strong at the end, but today I got off to a great start and faded at the finish,” said Raines. “It was almost like once I found out what position I was in I was thinking about it. I just ended up making too many mistakes in the end. But this was a good building block for me and every race I’ve been getting better and better.”

Check out the National Hare and Hound shot by Abstract Collective’s Beau Cottington. It’s flat excellent and the battle between Kendal Norman and Russ Pearson is the true essence of desert racing.