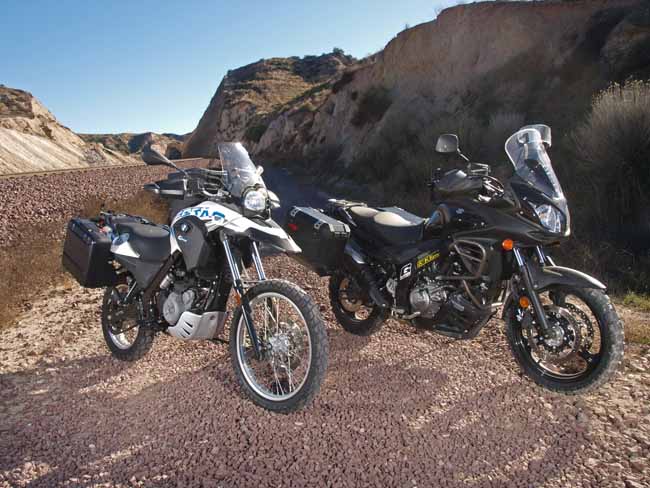 We’re somewhat amazed by the price spread, or lack thereof, between dirt bikes and street bikes. The standard Suzuki V-Strom 650 is a V-twin with incredible complexity and carries a price of $8299. The Suzuki RM-Z450 is $8399. The RM-Z is pretty amazing in its own right, but it just seems that street guys get a lot more stuff for their money.
In the adventure bike world, prices range from $6299 for the Kawasaki KLR650 to $18,350 for the BMW R1200GS Adventure. In terms of price, the bike most closely matched to the Suzuki V-Strom is the BMW G650GS Sertao that we tested in the April issue ($8650). Our Suzuki was the adventure model, which has $1500 worth of accessories bolted on, and with saddlebags, the BMW’s total comes out virtually the same. Here’s how the two compare.
POWER: The Suzuki V-twin motor is faster, as you might expect, but the BMW is surprisingly strong for a twin. Both bikes make a ton of torque, but the Suzuki revs much higher (a 10,000 rpm redline versus 7000). We were pleased that the Suzuki has a low first gear, which is handy off-road.
WEIGHT: Both bikes are beefy. Suzuki claims 519 pounds for the V-Strom, including 5.3 gallons of fuel, which translates to about 486 pounds dry. The BMW is claimed to be 390 pounds dry. By the seat of our pants, those numbers aren’t far off. The BMW feels about 100 pounds lighter. The bottom line is that neither bike is a feather in the dirt. The Suzuki’s weight is somewhat comforting on the road, as it feels more substantial and stable.
RANGE: The Suzuki has a massive 5.3-gallon tank. We typically got about 53 mpg, even with off-road tires, and that gives the bike great range. The BMW only has a 3.7-gallon tank, but it always seems to get over 60 mpg. It still can’t go as far as the Suzuki and has an overly anxious fuel light that seems to come on when the tank is just over half empty.
COMFORT: This is where these bikes shine. Both are absolutely great ways to spend a day in the saddle. The Suzuki’s wind protection is a little better, but it has a little more handlebar buzz at freeway speed. The BMW shakes more, as single-cylinder bikes do. In the dirt, both bikes handle best when the rider stands up, because the seats are pillowy and trap the rider with his weight too far rearward. Both bikes have narrow footpegs, so you need really good boots with stiff soles. The BMW’s seat is especially low and cramped for tall riders. There is a tall seat option.

OFF THE ROAD: There’s no question that the BMW is a better dirt bike. It’s lighter; it has more ground clearance, and the 21-inch front wheel rolls over rough stuff better. It could use a little more weight on the front wheel, which feels even lighter when the under-seat tank is full. In the dirt, you can disable the ABS, but you have to stop to do it. Even after doing this, you’ll have a hard time with the rear brake because it’s positioned too low and isn’t adjustable.
The Suzuki has a heavy-feeling front end but doesn’t steer any better than the BMW. In fact, the front end seems to collapse the moment it reaches the dirt. There’s simply no escaping the Suzuki’s weight. It requires a very cautious approach to any off-road obstacles. The saddlebags that come on the Adventure model aren’t especially dirt-friendly. They’re a full foot wider than the BMW’s saddlebags. On the Suzuki, you have to be careful not to knock over your riding buddy when you want to pull up beside him.
ON THE STREET: As you might expect, the Suzuki is much better on the street. The motor gives it a huge advantage. It has a super-wide powerband, thanks mostly to its 3000-rpm advantage. The BMW revs, but it isn’t happy about it. The Suzukiâ€™s wind protection is better, and its V-rated radial tires give it a big contact patch, which adds to its already solid stability. Take care, though; those saddlebags are just as wide on the street and can be taken off by parking-lot barriers and poles.
BOTTOM LINE: We know who you are. You know who we are. The magazine is called Dirt Bike for a reason, so naturally we’re more fond of the BMW, but that doesn’t mean we don’t like the V-Strom. It’s a lot of bike for the money and represents a legitimate segment of the adventure bike world, but you have to understand up front that it’s the more street-oriented segment.