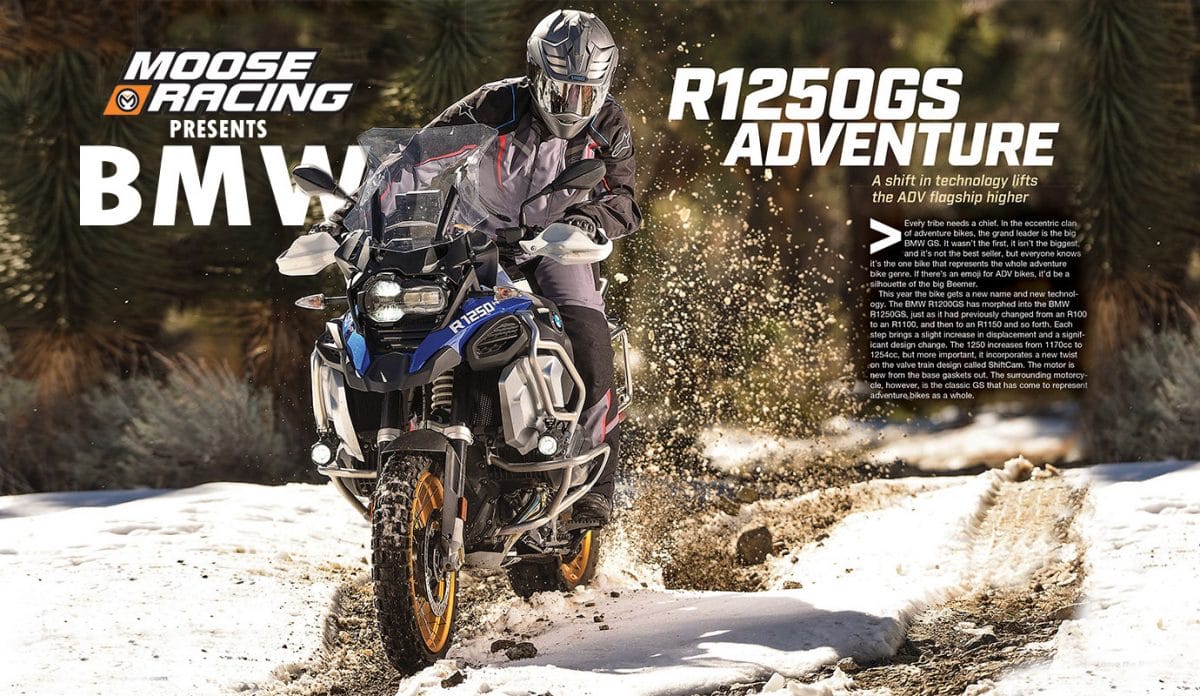 This year, BMW’s adventure flagship gets a new name and new technology. The BMW R1200GS has morphed into the BMW R1250GS, just as it had previously changed from an R100 to an R1100, and then to an R1150 and so forth. Each step brings a slight increase in displacement and a significant design change. The 1250 increases from 1170cc to 1254cc, but more important, it incorporates a new twist on the valve train design called ShiftCam. The motor is new from the base gaskets out. The surrounding motorcycle, however, is the classic GS that has come to represent adventure bikes as a whole.

AS THE CAM TURNS

BMW’s ShiftCam design isn’t just variable cam timing. The intake side of the motor actually has two different cam profiles for each valve. The mild cam lobes, which the engineers call partial load cams, have less lift and shorter duration, and the two intake valves open asymmetrically. By opening one valve before the other, the combustion chamber is filled more efficiently, they say. At some point, as determined by a combination of engine rpm, load and throttle position, the camshaft shifts and more aggressive lobes come into play. It’s like a more sophisticated version of a two-stroke power valve. The camshaft drive now employs a toothed chain instead of a roller chain. The lubrication system has a number of changes, and there’s a knock sensor system for low-quality fuel.

The goal is more power, but BMW claims there are benefits in emissions and fuel efficiency. The official peak horsepower rating for the 1200 was 125 horsepower with 95 pound-feet of torque. The 1250 is rated at 136 horsepower and 105 pound-feet. BMW made a number of other changes to the GS, but very few of them concern the basic design elements of the bike. The clutch and gearbox are unchanged, as is the frame. It’s essentially the same that it’s been since 2013. That was when it was redesigned from top to bottom and became liquid-cooled. The bike still uses a driveshaft with the Paralever suspension configuration that nullifies most of the torque effects that drive shafts usually generate. You might not think that’s important until you ride a vintage BMW from the days before Paralever. The suspension would extend sharply on acceleration. In front, the suspension uses linkage combined with a single shock. BMW calls that the Telelever design. The most interesting aspect is a lack of dive under braking. When you grab a handful of front brake, the bike remains more or less level.

With any modern adventure bike, the electronics portfolio is a very big deal. The most basic version of the GS has ABS, hill-start control and advanced stability control. Premium packages have more sophisticated adjustability in traction control, power output and rear suspension (preload and damping). There are a number of ride modes where all those features can be adjusted at once, including Rain and Enduro Pro.

In case you’ve never ridden a big BMW in the dirt, it’s not quite like anything else. All adventure bikes are big, but the BMW gives you the impression that it’s really, really big. The horizontal cylinders are a part of this, but you don’t really notice that unless you put your feet down. You kind of settle into a cockpit area that makes it seem like you’re inside the bike. The A model is defined by a larger fuel tank (almost 8 gallons, as opposed to 5.3 on the standard model). That makes the bike look even bigger. But, somehow, it all actually works on dirt roads. When you plug in a dongle that allows Enduro Pro mode, the computer lets you get a little loose in the dirt. You don’t just hop on and go straight to a big sandpit. It takes some time to build up that confidence and to know the bike’s limitations. Here’s what the GS likes: fast, semi-smooth dirt roads; technical hard-packed two-trackers; small jumps and water bars; small rocks and gravel. Here’s what you learn to avoid: sand, narrow trails and steep hills. In sand, you simply can’t escape the weight. The bike will sink unless you have the supreme confidence to go very, very fast. That’s easier said than done. If you get stuck, you have to engage Enduro Pro mode to disable traction control and allow the bike’s power to pull you out. As far as hills go, that’s a confidence thing, too. It clearly has the power to go up anything, but it might not have the traction. The last thing you want is to abort a climb that’s going poorly and attempt a turn-around. That’s a pro-only maneuver. There’s massive protection on the A model, which means you won’t break anything if you drop it at low speed. Only the valve cover gets scratched. Getting it upright might be a challenge. It weighs about 550 pounds if the tank is dry. That’s typical of big adventure bikes, but it ain’t light.

When everything is right, lazy drifts on smooth dirt roads are an absolute blast. You simply stand up, lean forward and gas it. The traction control actually lets you get enough wheelspin to turn, but we still recommend Enduro Pro for off-road riding. It’s more predictable that way, but just be aware, there’s a lot of horsepower at your command.

When you ride on the pavement, there are some things about the BMW that are unlike any other bike. You feel a slight twist when you blip the throttle. That’s the whole bike torquing around the crank. It’s very level under both braking and acceleration. That’s the Telelever front suspension and the Paralever rear end. On top of that, there’s a very distinctive sound that’s like nothing else in the motorcycle world. When you’re on a BMW, you know it. 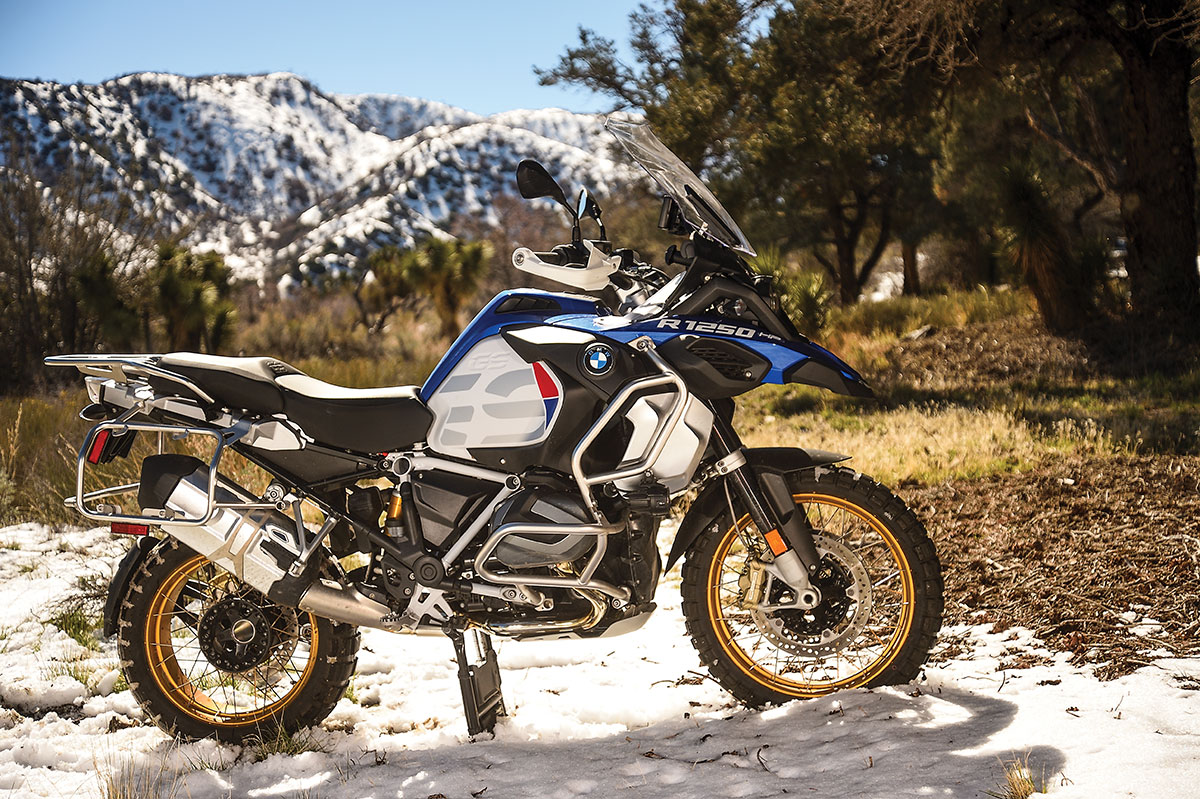 One thing that’s new is the instant response you get when you gas it. The motor was already very powerful before the new valve train, but it was more of a gradual buildup. Now, it has snap. The 11-horsepower increase that BMW claims doesn’t tell the story when it comes to the true increase in performance. The real difference is the increase in low-rpm response. The motor actually idles at lower rpm; everything starts sooner. Now it can go toe to toe in a roll-on with anything else in the ADV world. A KTM 1290 or a Ducati Multistrada will still get away from the BMW when you approach peak power, but by then, you’re seriously breaking the laws of man and nature.

YOU VS. THE WORLD

The BMW R1250GS Adventure is still a worthy flagship for all of adventuredom. It’s a high-end, premium motorcycle, and it’s not cheap. The base price is $17,695 for the standard GS, and the A model is $19,945. You won’t find many strippos in the U.S., though. BMW only imports the bike with option packages that push the price as much as $4000 higher. If you already have a late-model R1200, don’t panic yet. The only real difference between the new bike and last year’s is power output and a few fairly minor upgrades. If you haven’t ridden a BMW GS at all, though, take our advice—don’t do it until you’re ready to spend the money. The temptation is too much.