Dirt Bike Magazine attended the the 100th year anniversary of the Great American Hill Climb in Billings, Montana, over the weekend. This is one of the longest running motorcycle events ever and they raised a $100,000 dollar purse for the 100th year. Dirt Bike’s Kyle Redmond made the trek to get his feet wet in the Hill Climb world on a custom built 450 Husqvarna Factory Edition. The climbing started with the 450 Pro Altered class Friday morning, and this was Kyle’s favorite class as that was his only bike he’d campaign in several classes. Kyle did his 2 runs for this class and realized they had made a huge mistake with the wheel setup. The traction was insane and the paddle tire was hooking up much more then during testing, he just couldn’t keep the front end down. After moving the back wheel further back for the following mornings 251-700 class it went a little better, but going up against bigger motors with nitrous wasn’t easy. He was shocked by the way the Pro Hill climb regulars attacked the hill, with a never lift attitude. Kyle ended up 9th against the 700s. We put together some photos of the hill and some of the carnage it was responsible for.  These riders are animals! 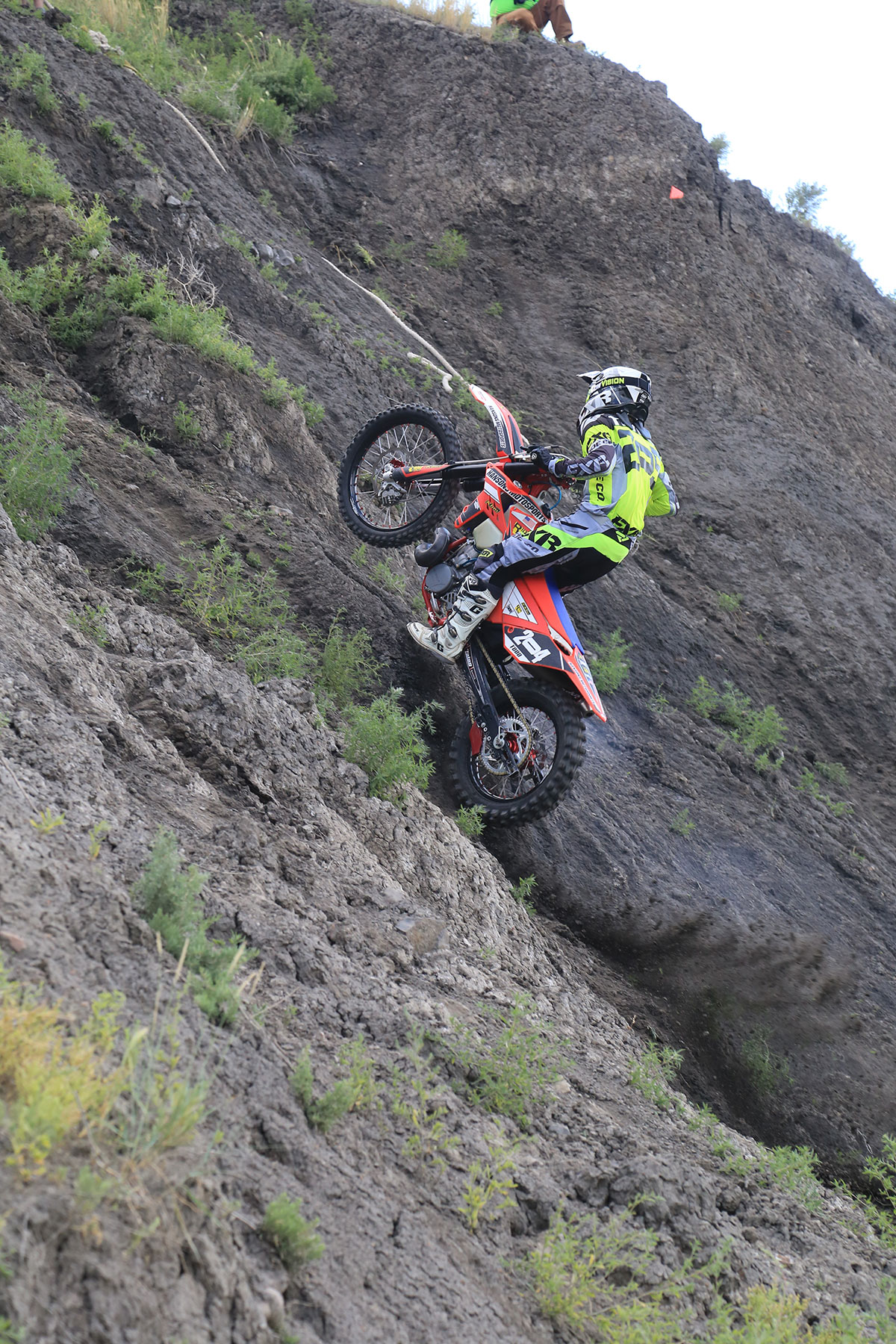 Austin Tyler won the 0-600 class on his dads Beta, with a CR500 two-stroke motor shoe horned in the Beta chassis of course. Austin is a local and a fan favorite at this event, he also won the open class on his Suzuki Bandit 1200 with an impressive ride. 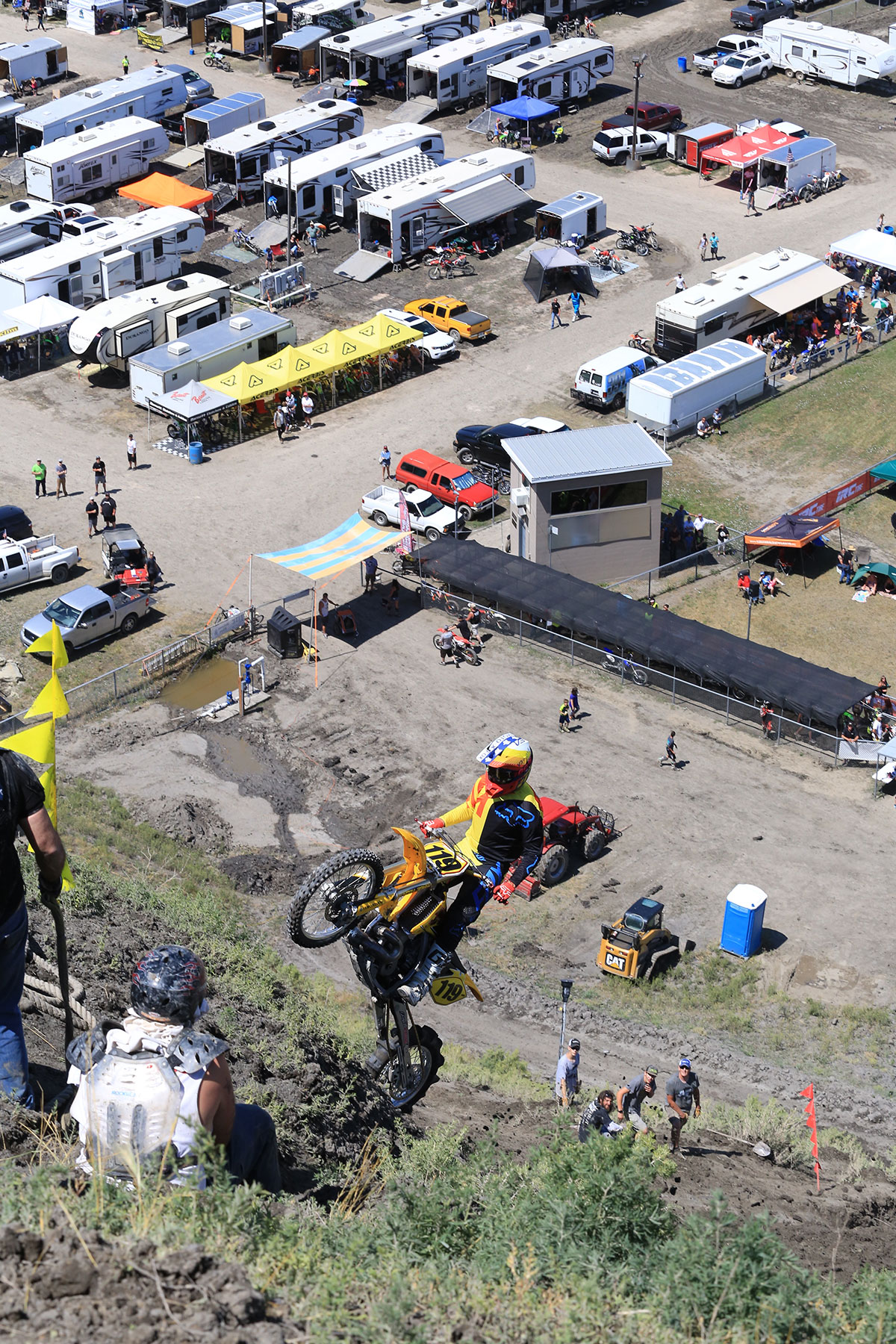 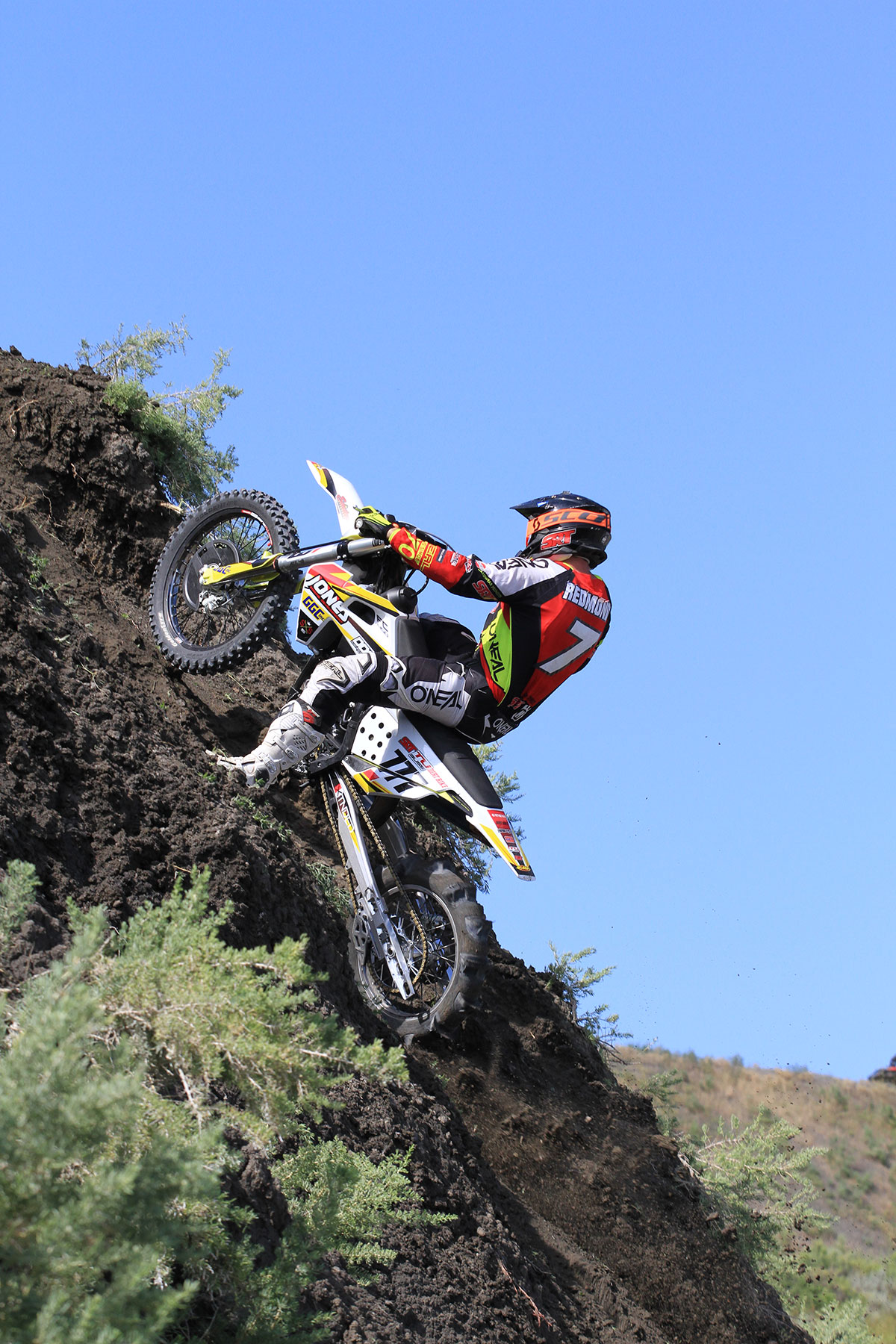 This vertical ledge was about half way up the hill, Kyle Redmond made the hill only 1 time in the 450 class out of 2 tries. You can see the wheel is in the forward position and that paddle is hooking up and hard to handle. 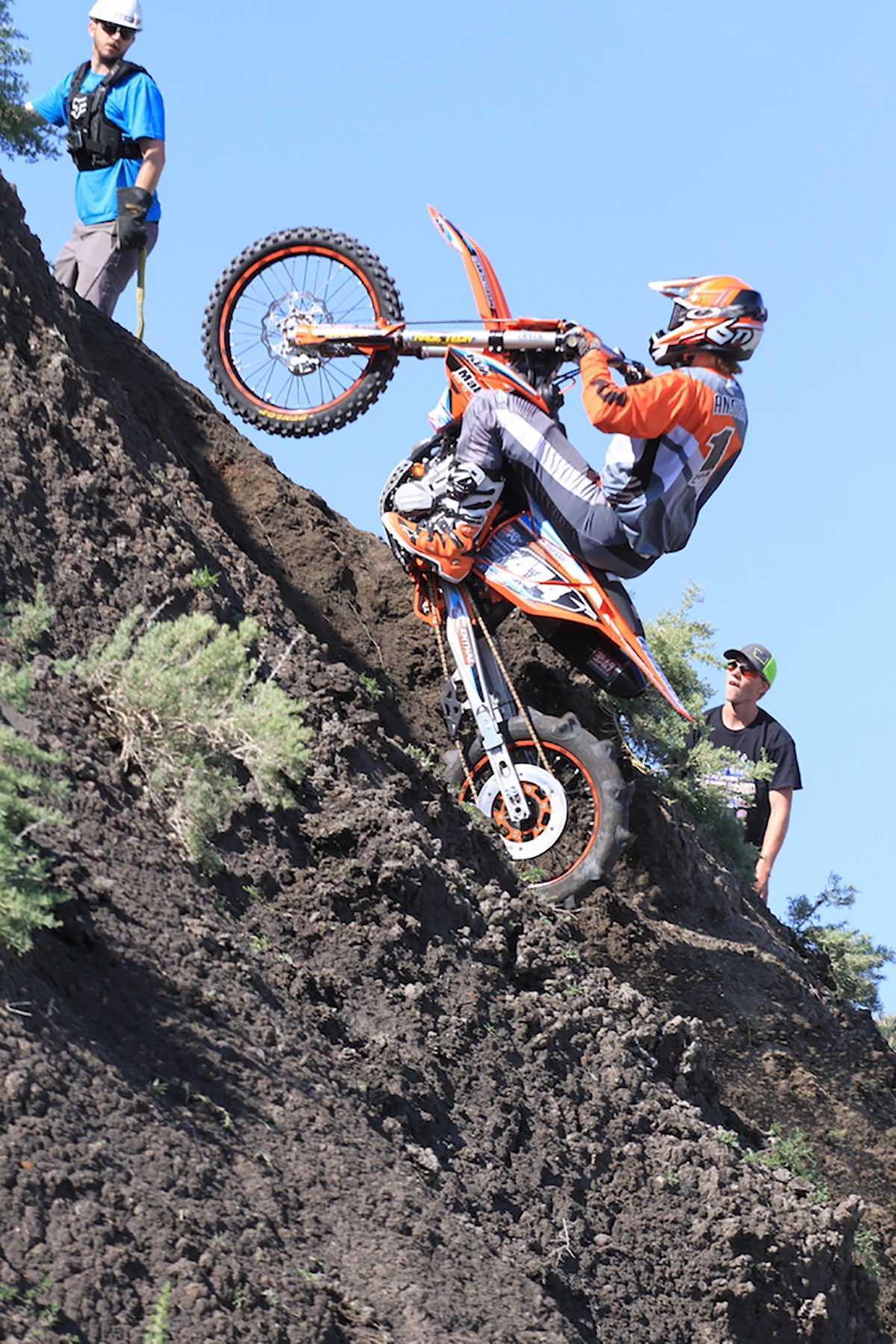 Jake Anstett moved into being a full time Hill Climber after racing Supercross earlier in his career. Jake looked amazing all weekend and used his rounded skillset to win the side by side and the 450-Altered classes. 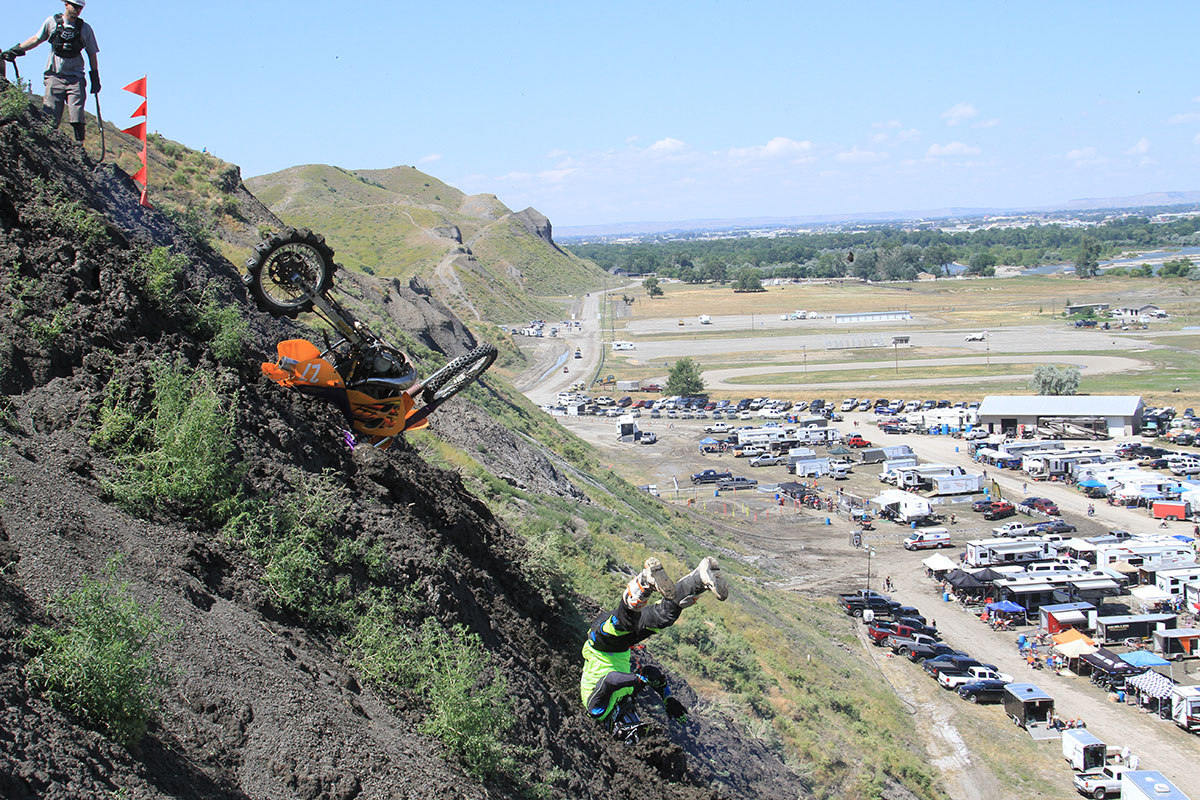 This guys shows us the wrong way to get up the ledge, the catcher didn’t get ahold of his front wheel in time with that hook. 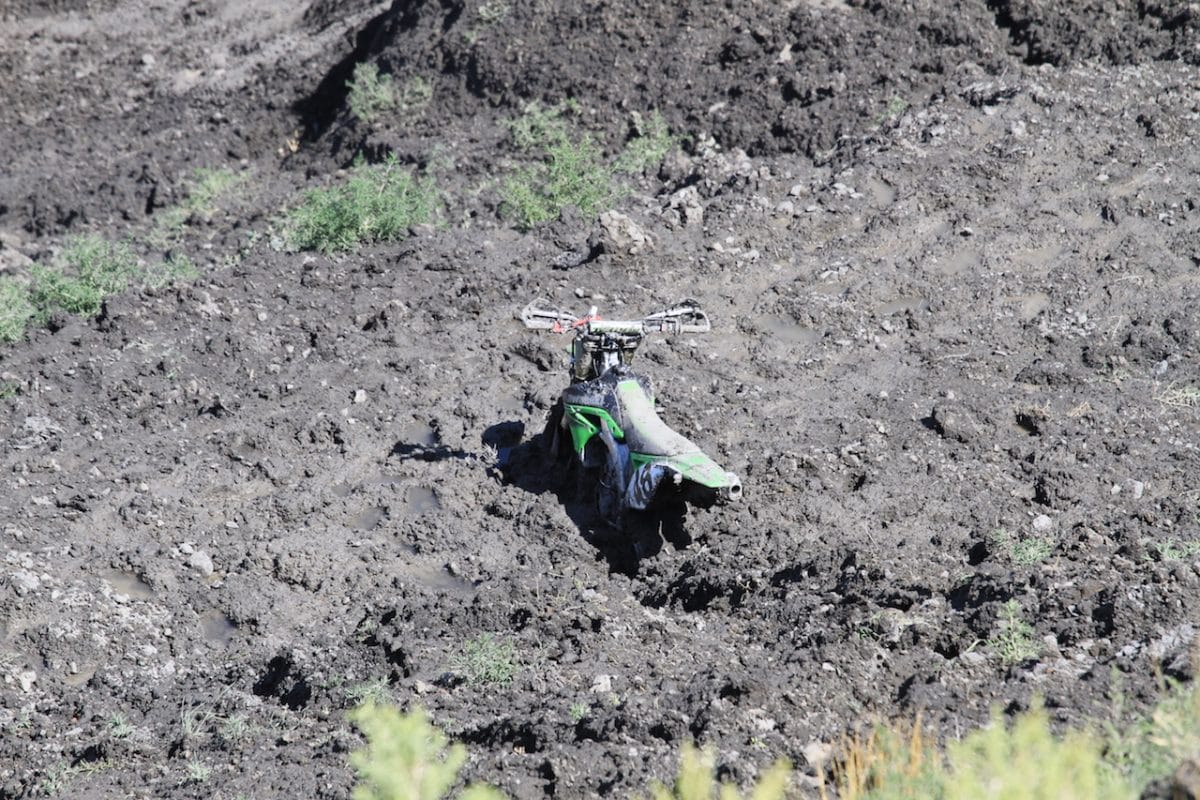 This Kawasaki spent the night stuck in the mud, it rained so hard Friday night that the hill became a mud bog. The riders kept on climbing despite the deep slop that had flowed down to the base of the mountain.

Check out this sequence of Mason Miller when his run went wrong. 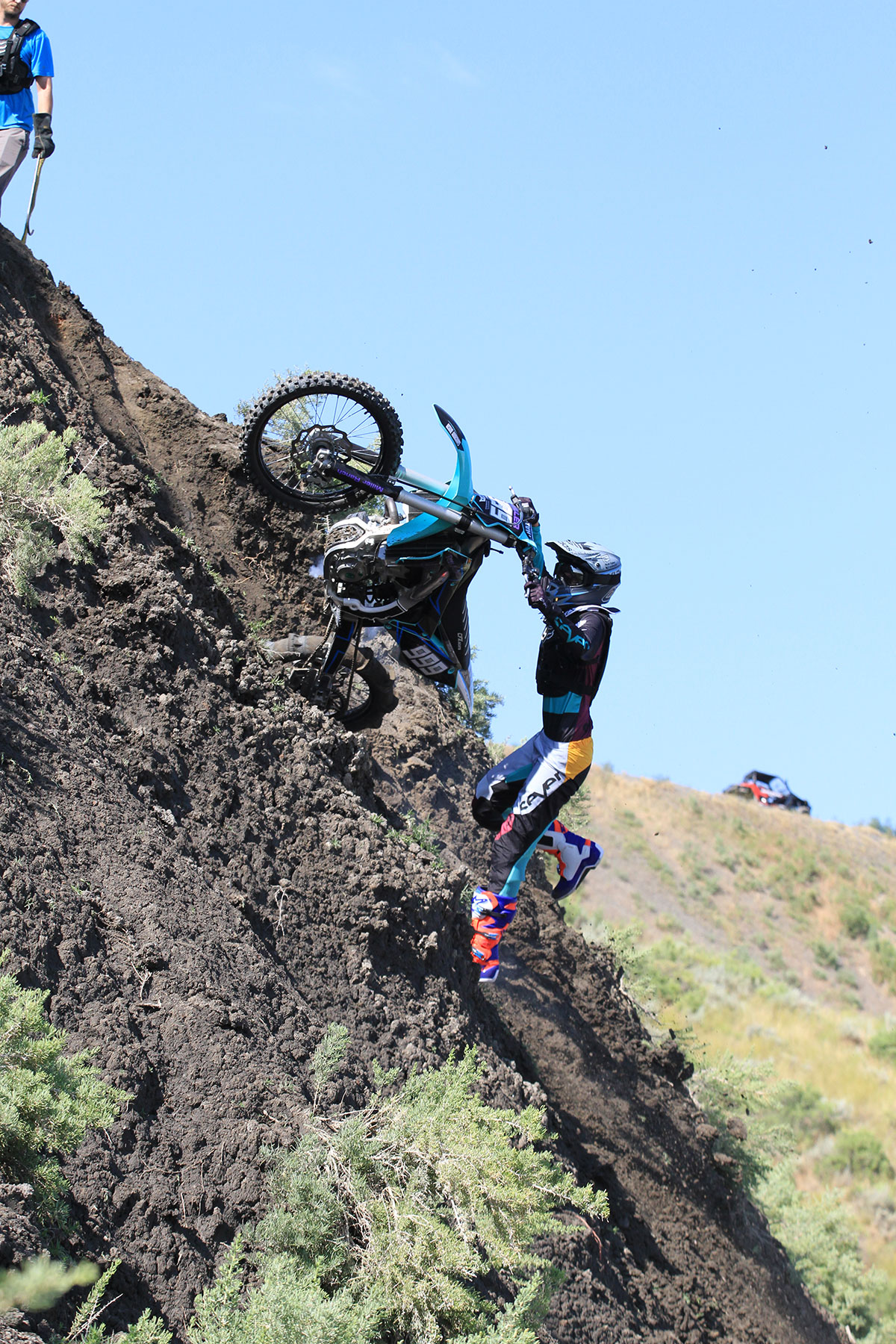 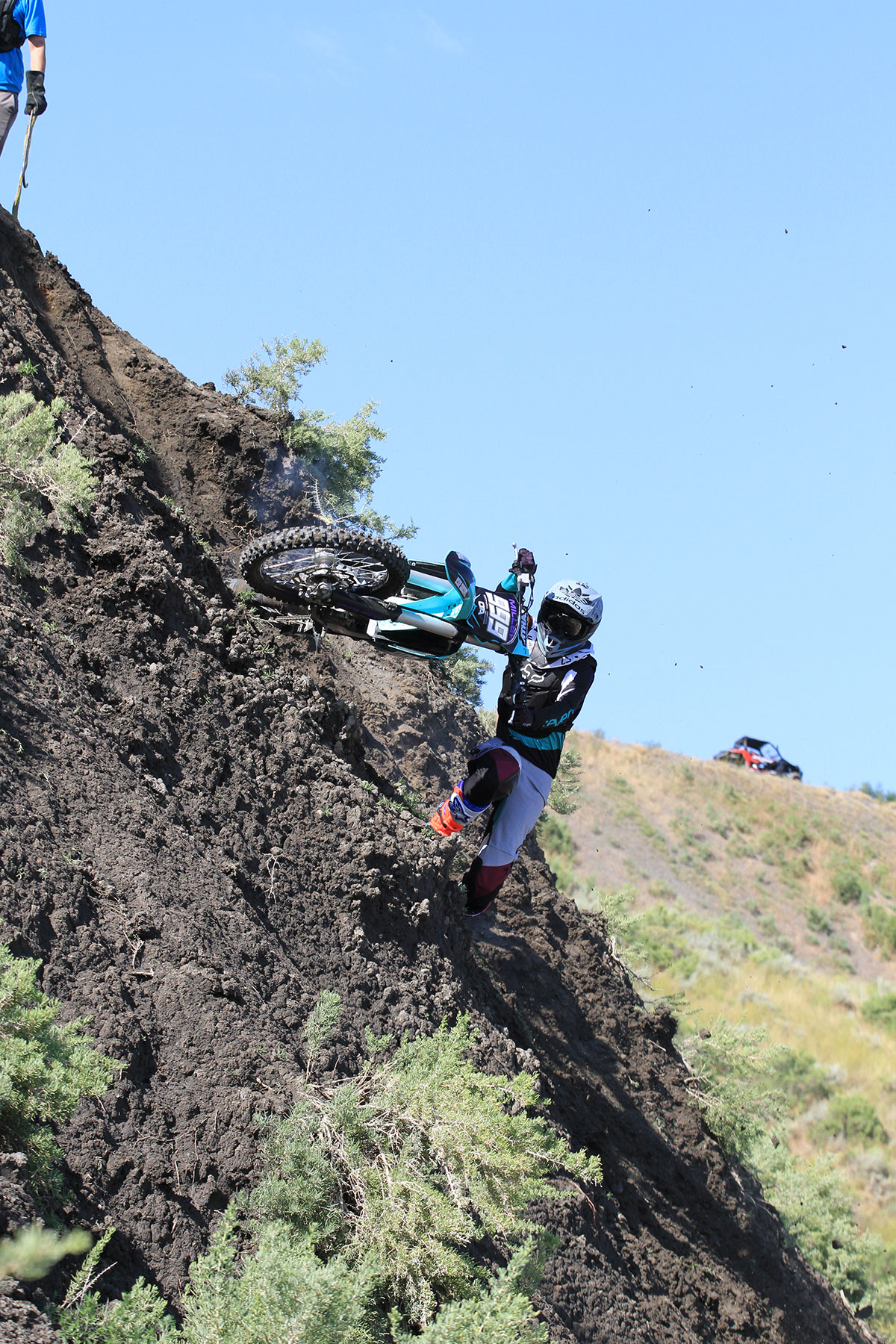 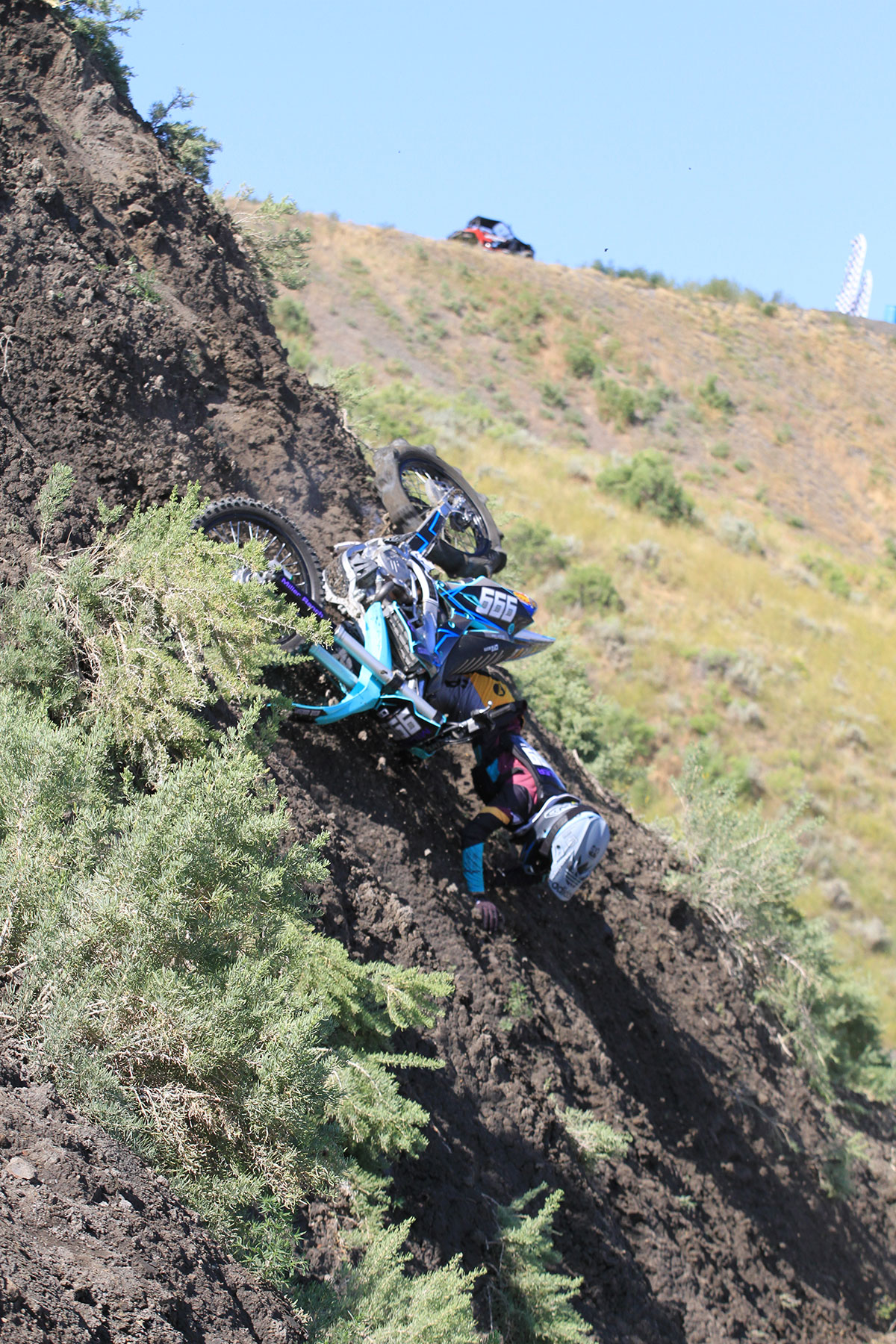 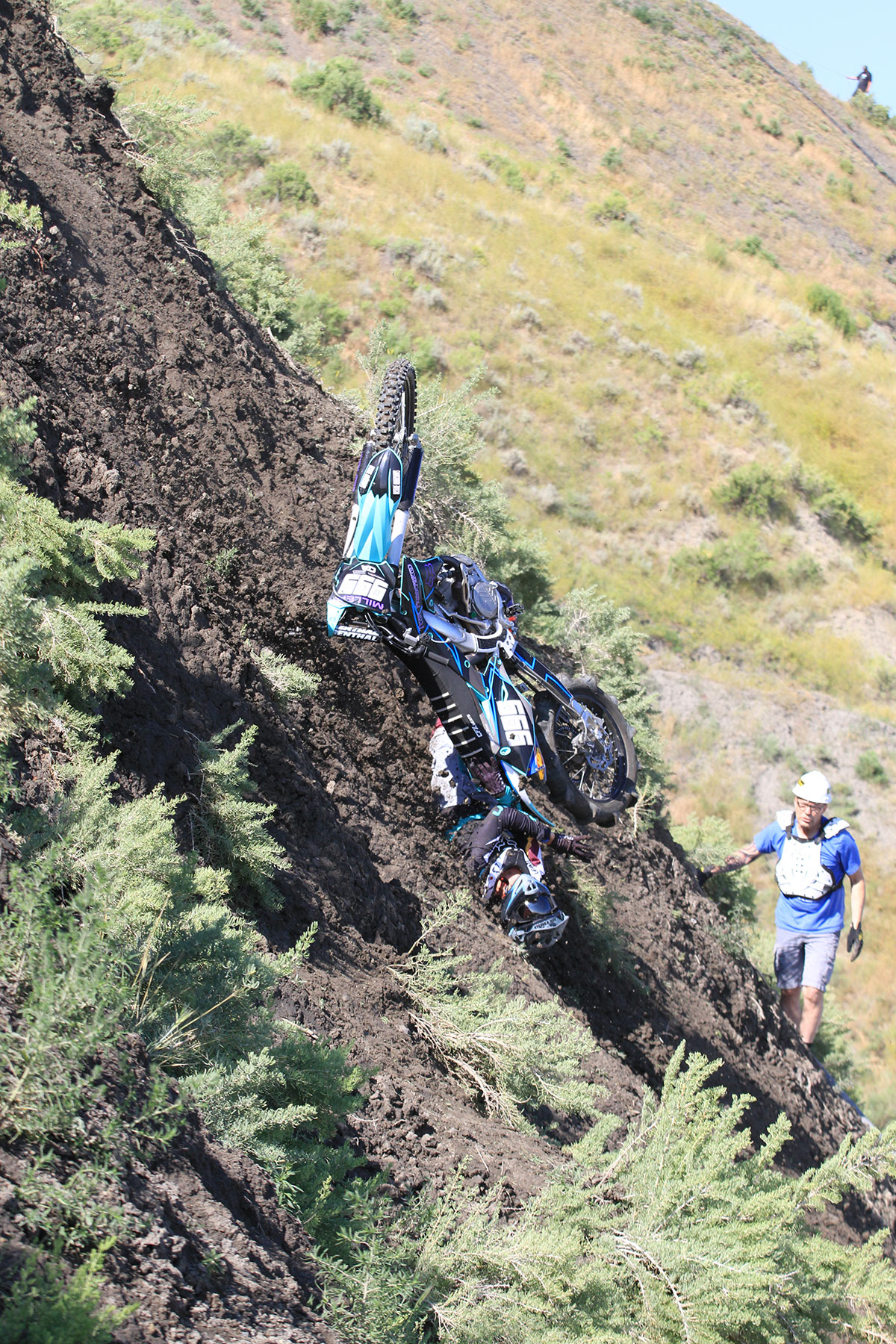 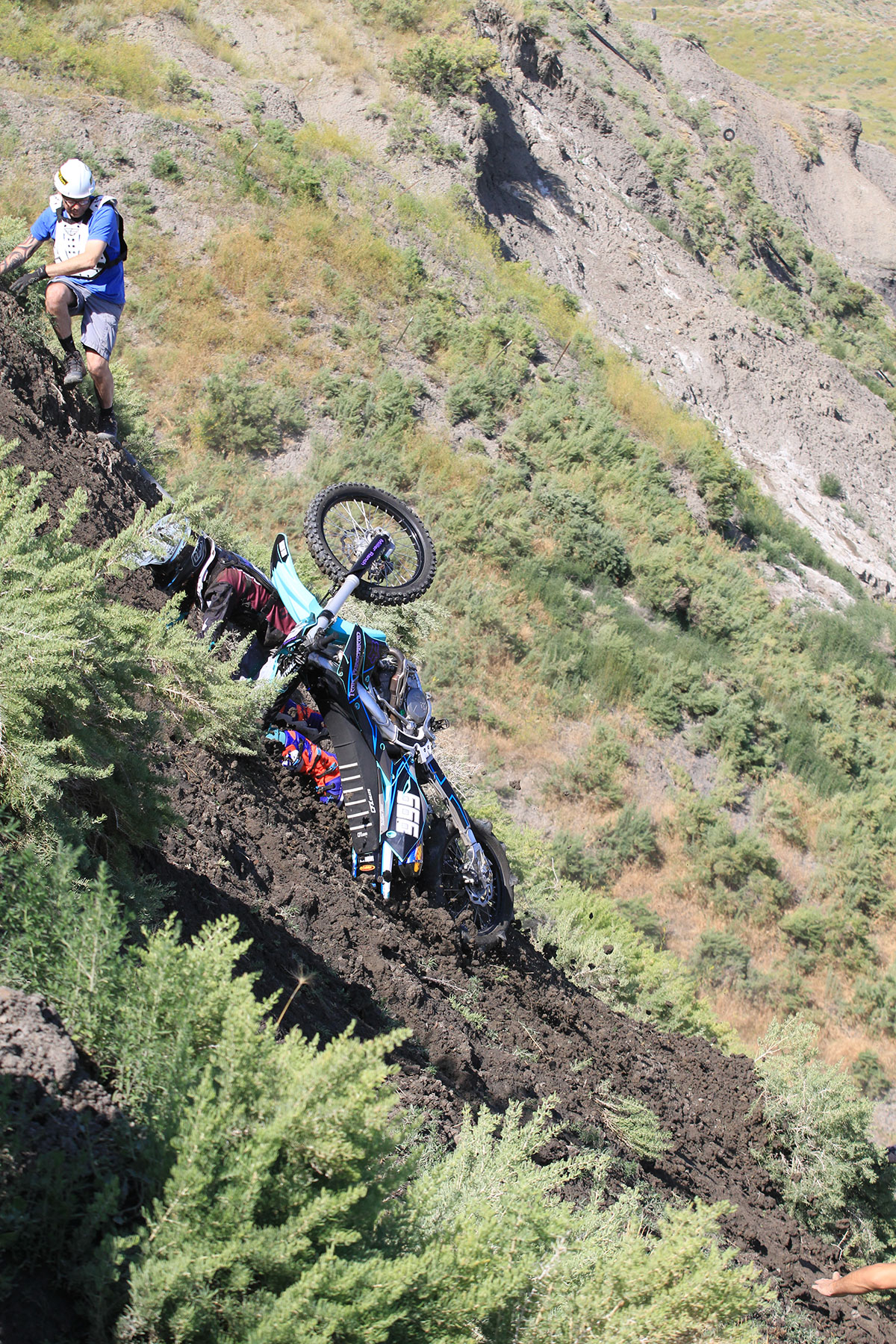