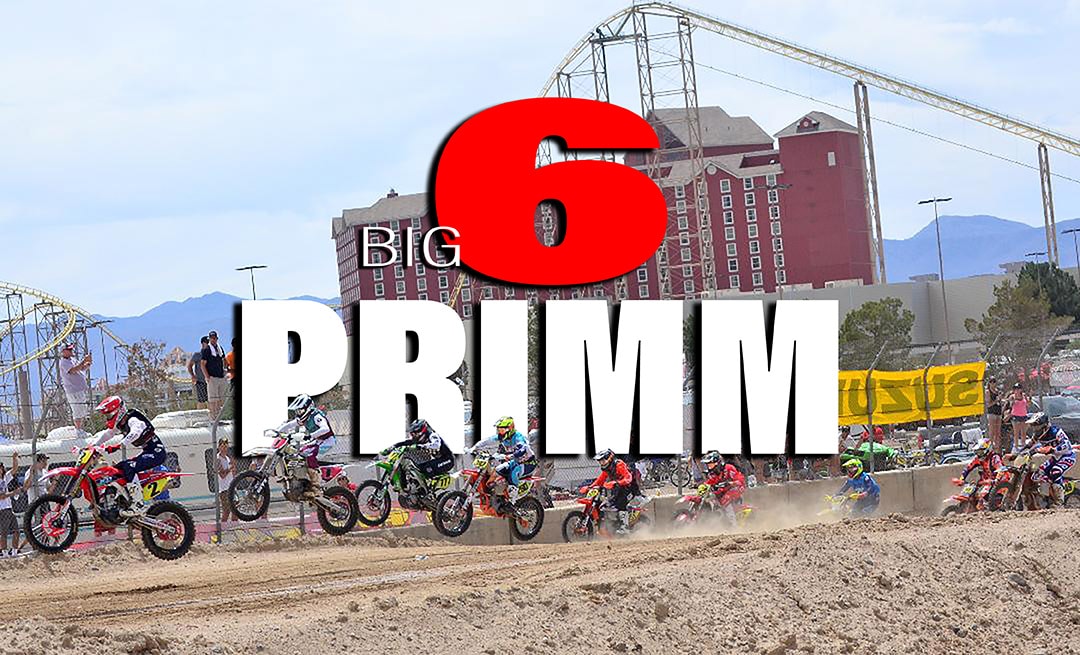 The 2018 FMF Big 6 GP series has been especially big this year and the Pro class has been completely unpredictable. Going into the season, the favorites were last year’s champion series Zach Bell and GNCC XC1 Champion Kailub Russell. But after five rounds, it’s JCR’s Trevor Stewart who now has the points lead. The Shamrocks MC’s round took place at Buffalo Bill’s Resort in Primm, Nevada this weekend, and the Pro Class of the West Coast GP was all Stewart’s from start to finish. Stewart won the first round of the year, but was injured shortly after that and struggled for the following events. Now, with the series breaking for summer, the points are tighter than ever.

Second place went to Chaparral Kawasaki’s Blayne Thompson, who spend the first half of the race fending off Three  Brother’s Husky Rider Zach Bell. Halfway, through the race, Bell ran into trouble and dropped back, leaving Kailub Russell to take over third place. Kailub has been traveling back on forth from coast to coast, and is currently leading the GNCC XC1 class, but has yet to score a win out west. This weekend he was third, marking his best finish so far this year.

WORCS Champion Gary Sutherlin finally had a decent race, although still not what he’s capable of. After suffering three DNFs this season, he scored a fourth at Primm. Motocross import Derek Kelly is another rider who is figuring out this form of racing. He’s been riding a Slamlife Honda on the same team as Mark Samuels, Justin Jones and Ricky Dietrich, learning a little more from those guys with every race. With a fifth place at Primm, he’s made a massive improvement. Some of the series regulars had trouble with this round. Rockstar Husqvarna’s Dalton Shirey was injured last week and was a no-show at Primm. He’s entitled to throw away his worst score, so now he has a three-month break to heal up without losing much ground. RPM’s Eric Yorba separated his shoulder last month at 29 Palms. He rode surprisingly well for half the race, but in the end fell back in the pack. He will probably use Primm as this throw away, as well. Justin Jones also had trouble after running up front in the early laps.

Clay Hengeveld has been a class act in the Pro 2 class this season. He won again, making it four of five rounds, so he can still finish with a perfect score with his one throwaway being a second place. CST’s Mitch Anderson was second, marking his best race so far this season.

The FMF Big 6 Series will reconvene after a three-month break with the Viewfinders GP on October 6th at Desert Empire Fairgrounds in Ridgecrest, CA. For results and more info, go to big6racing.com.