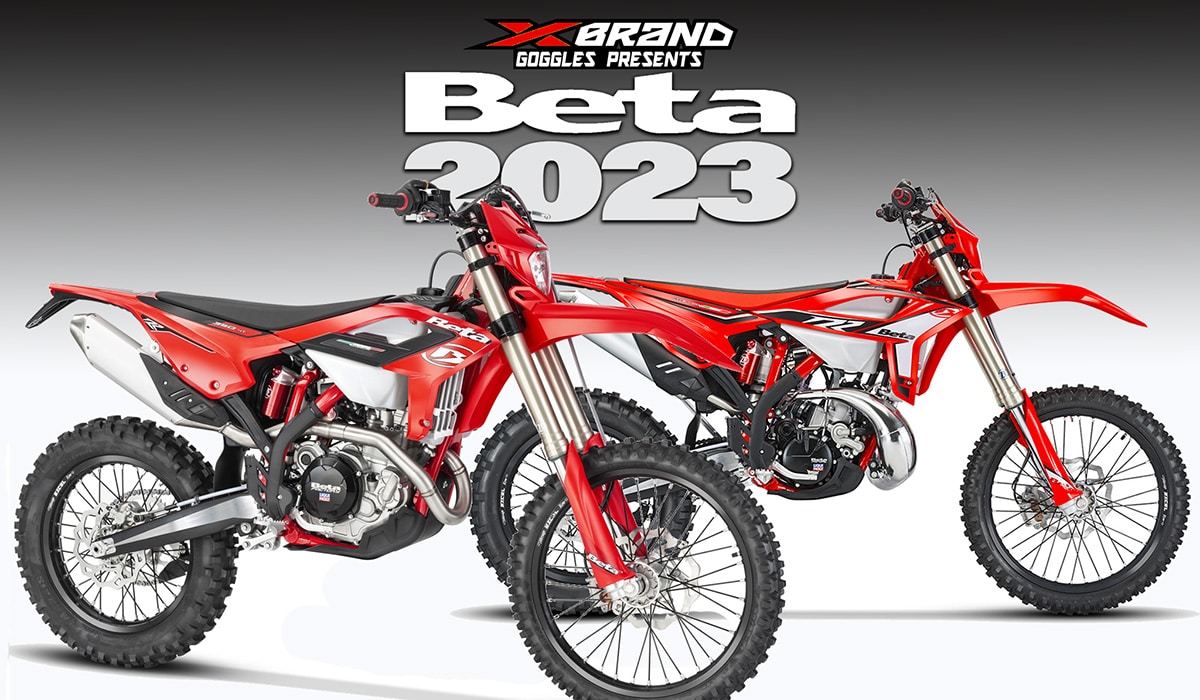 Beta has revealed the first wave of its 2023 models. The big news is that the Italian manufacturer now has a more affordable line of off-road four-strokes. Previously, the 350, 390, 430 and 500 four-strokes were only available in the RS dual-sport line or as Race Editions. Now, the RR line of closed-course competition off-road bike includes four-stroke in all four displacements. The official press release follows.

Beta USA is proud to re-introduce the standard RR range of 4 Stroke RR models to the USA marketplace after a six-year hiatus. Due to changes in the market, Beta USA is offering the 4 stroke RR models as well as the 2 Stroke RR models for 2023. These four new models differ from the Race Editions (to be announced later in the season) and are designed more for the common rider.

Starting with the proven Beta 4 Stroke powerplant, designed and manufactured by Beta in Italy featuring twin fuel injectors, diaphragm clutch, electric starting, dual map choices, and traction control. Then, combine this power package with a chassis and suspension that is more forgiving than the competition’s offerings with Beta’s trademark “Rideability”.

Of course, Beta did not forget about the 2 Stroke RR range with redesigned bodywork, updated suspension settings, and major updates for the 125 engine. Beta Italy worked in close collaboration with their factory team Enduro champions Brad Freeman and Steve Holcombe to further develop a series of new improvements regarding both the powertrain, frame, and suspension for the 2023 2 and 4 stroke RR models, this along with the guidance of the Beta engineers, have created a product range that offers both performance and beauty. An all-red color scheme and new plastics with a more linear, essential, and sleeker design than before, providing the RR with an even more minimalist look. Some say “less is more”: Beta believes that only the very best will do, and creates bikes with no frills, with only what you really need, whether racing or out on a Sunday ride with your friends.

With this new range of eight different models, each with its own personality, to cater for the needs of a very diverse spectrum of riders. There’s the perfect RR for every rider, but what every model has in common is the ability to instill confidence in the user and offer a genuinely rewarding riding experience. 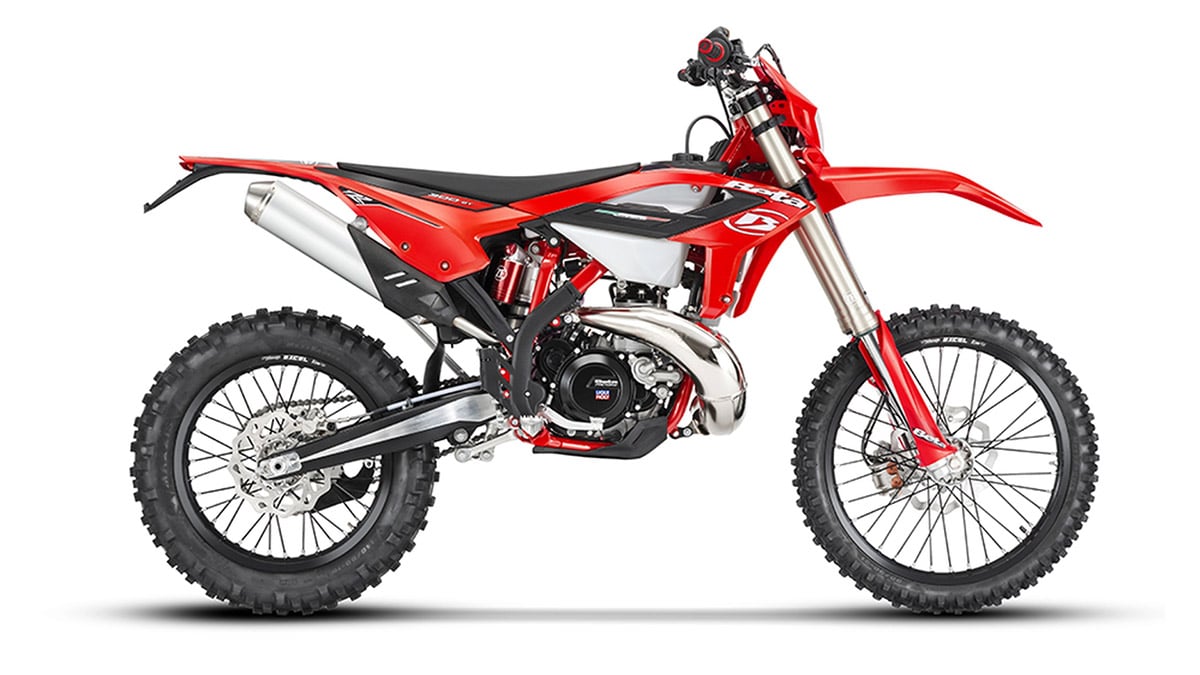 Updates for all the 2023 RR models include:

» Front Fork: In the quest for an even sharper rider feedback, Beta Italy’s engineers have revised the internals of the front fork – a ZF component, as on the previous generation. The geometry of the oil passages around the fork piston has been modified to reduce cavitation in the system to ensure impeccably smooth fork action throughout the entire travel. This update broadens the effect of the performance as the rider changes the external compression and rebound settings and results in improved rider comfort. Therefore, the bike remains composed and controllable even in rough terrain conditions. The goal is to create a front-wheel feel for the rider that provides a greater amount of confidence

» Radiator shrouds: The new shrouds are narrower than before to give the rider more freedom of movement, especially when cornering. Designed to be sleek and also contribute to the revised, simple, and essential new look of the bike.

» Graphics: all models now feature a new all-red color scheme. The style of the graphics is more minimalist than before, with bold, clearly defined forms and purer, more modern lines which emphasize the muscular shape of the bike and link the new shrouds seamlessly to the other components. 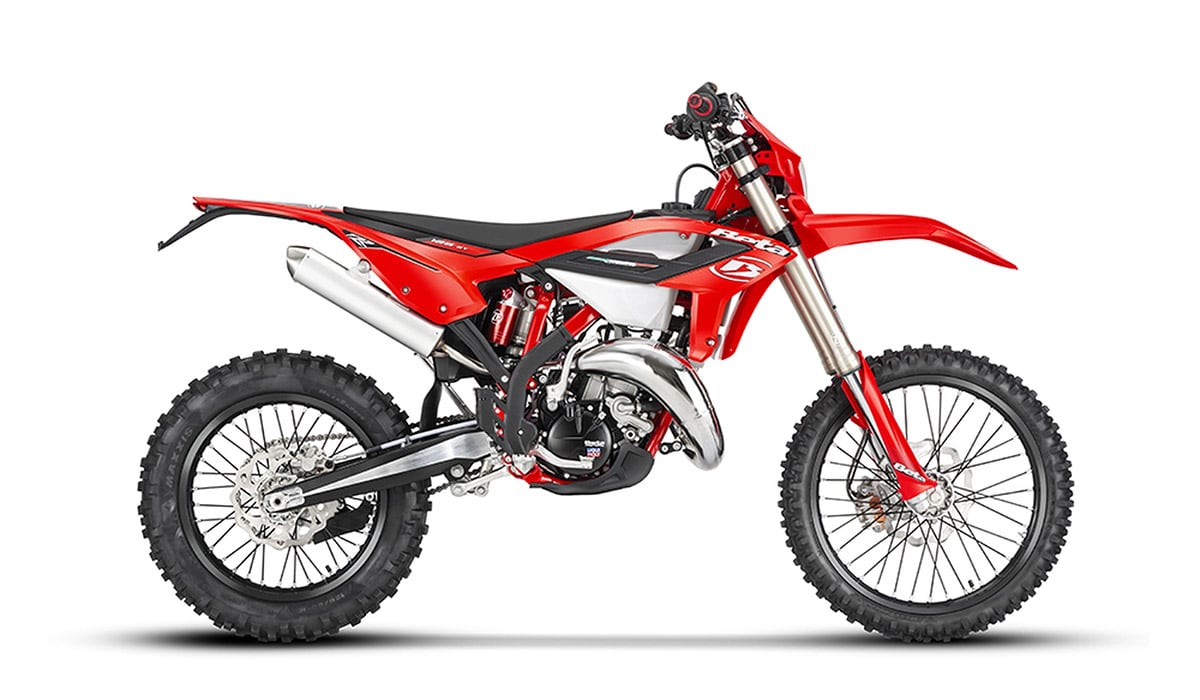 For the 2023 model year, the 125 RR 2 Stroke has received the most substantial and far-reaching modifications of the entire 2 stroke range. The upgrades made to the little 1/8 liter power unit have added that extra sparkle that younger riders look for when squeezing every ounce of performance out of their bikes. This suite of upgrades geared to improving the performance of the bike and reducing engine inertia has made the 125 RR, which was already an agile, reactive machine before, even quicker and more responsive than ever, and capable of holding its own in the same rough terrain conditions dominated by its bigger siblings.

» Flywheel and crankshaft: the 125 2-stroke engine features a lighter flywheel and a smaller-diameter crankshaft than its predecessor. Both of these components have been introduced to reduce the inertia of the engine internals. In terms of performance, this translates to a quicker throttle response as it allows the engine’s components to spin up more rapidly, and lets the rider make full use of all the power available despite this model having less horsepower on tap than its bigger siblings.

» Crankcase: the smaller-diameter crankshaft takes up less space in the crankcase. Betamotor’s engineers have redesigned the crankcase to compensate for the space freed up by the smaller crankshaft, optimizing the interior volume of the component itself to ensure the air/fuel mixture flow needed to maximize the performance unleashed by the new components.

» Power valve: the power valve has been recalibrated to match the power delivery that the new crankshaft and crankcase has provided. 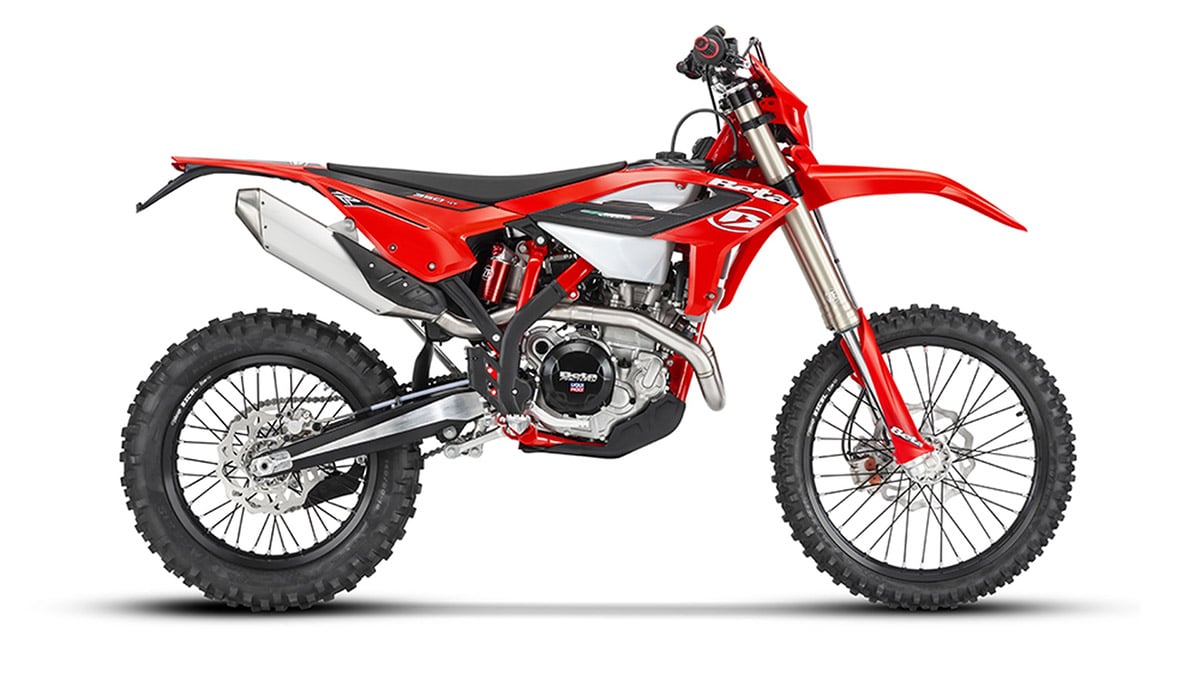 » Suspension Package: the 4 stroke RR arrives with the same suspension package as the standard RR 2 stroke models. The ZF fork, with its improvements listed above, has proven to be a class leader for all off-road riders. The Sachs/ZF rear shock is perfectly matched with the front fork to provide a perfectly balanced ride.

» Rear suspension linkage: unlike others in the category, Beta RR models have a linkage system in the rear suspension for a more plush trail ride feel with the ability to react to sharp square-edged hits as well.

» Engines: available in four different sizes, 350, 390. 430, and 480. These engines are at the same tune as the 2022 Race Editions and offer riders a choice of a wet or dry riding map for different riding conditions.

» Traction control: The most significant feature in the 4 Stroke range is the introduction of traction control, which made its début last year in the Racing range. To make the performance of its models ever more accessible to the rider in any situation, all 4 stroke Beta Enduro models now boast traction control. The traction control function on RR models is selectable by the rider from a button in the usual position between the steering tube and the fuel tank. The rider can disengage traction control at any time and in either of the engine maps available, while the function itself is calibrated differently for each of the two maps, offering the rider a choice of 4 different electronic control configurations.

» Exhaust: all 4 stroke models feature an exhaust header with a long head pipe that improves engine response at low engine speeds and increases torque at mid-range engine speeds. The result is a more tractable power delivery across the entire rev range, letting the rider get themselves out of trouble more easily or choose to use a higher gear than they normally would, for a more relaxed riding experience.

» Engine map: today, even Enduro bikes – which seem simple in appearance – come with advanced electronics. To take full advantage of the increased torque at low to medium engine speeds made available by the new exhaust header, 4 stroke models now feature dedicated new engine management maps which spread the power curve out more uniformly across the entire usable range of the engine, making the performance of even the biggest displacement Beta bikes completely accessible.

» Digital Meter: the 4 stroke RR includes a similar meter that is used on the 2 stroke models that provide the rider with an odometer, trip meter, hour meter, and many other functions. Headlight and taillight are also included.

Not included are professional dealer setup, taxes, license, or other required fees.

Information on future models will be released as follows: