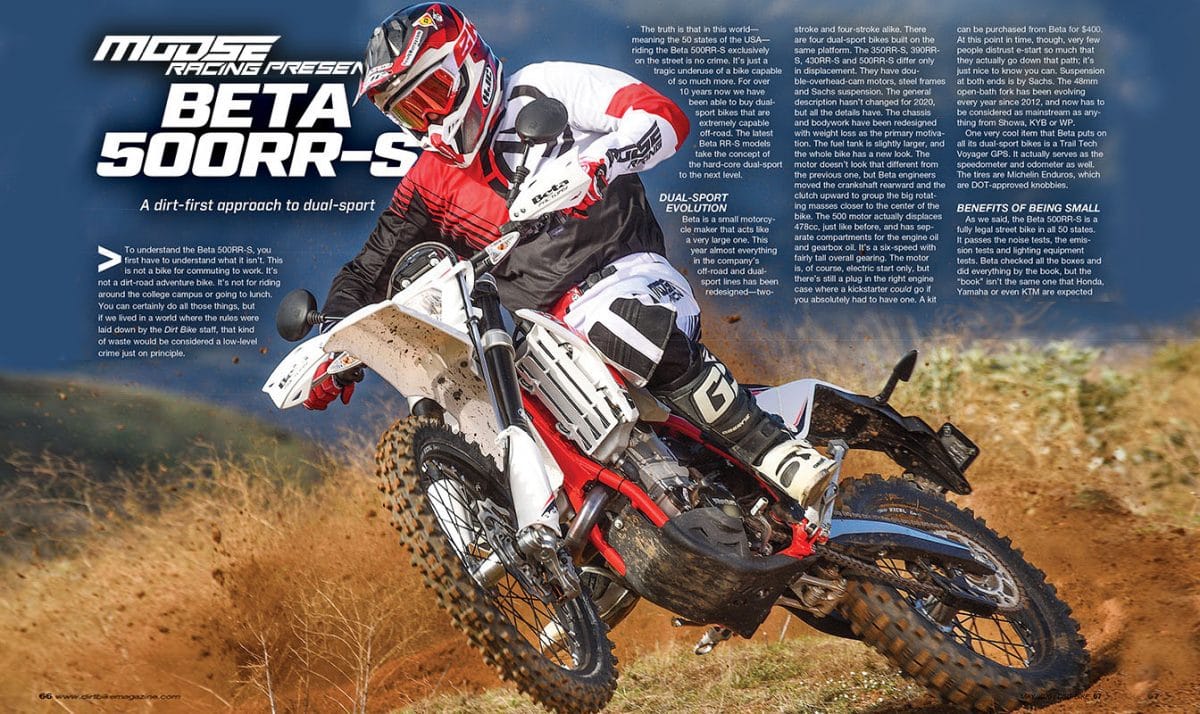 The 2020 Beta 500RR-S is not a bike for commuting to work. It’s not a dirt-road adventure bike. It’s not for riding around the college campus or going to lunch. You can certainly do all those things, but if we lived in a world where the rules were laid down by the Dirt Bike staff, that kind of waste would be considered a low-level crime just on principle. 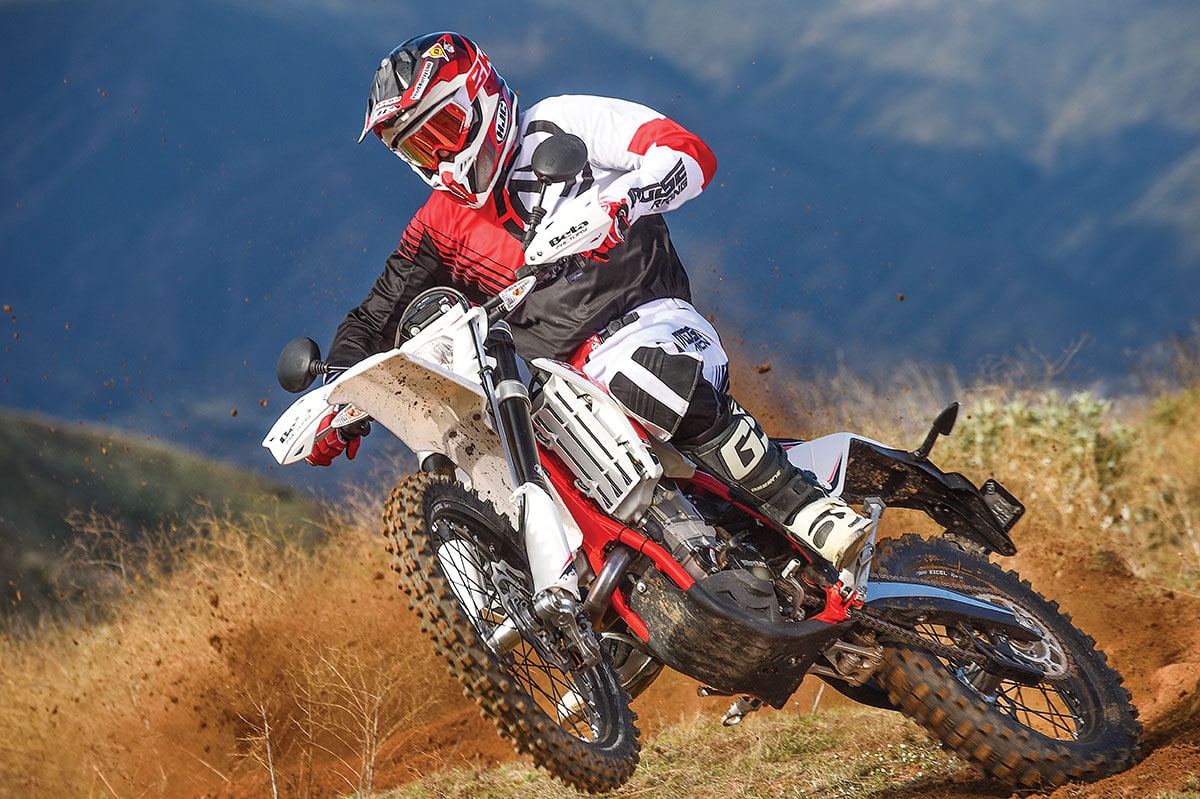 The truth is that in this world—meaning the 50 states of the USA—riding the Beta 500RR-S exclusively on the street is no crime. It’s just a tragic underuse of a bike capable of so much more. For over 10 years now we have been able to buy dual-sport bikes that are extremely capable off-road. The latest Beta RR-S models take the concept of the hard-core dual-sport to the next level.

DUAL-SPORT EVOLUTION
Beta is a small motorcycle maker that acts like a very large one. This year almost everything in the company’s off-road and dual-sport lines has been redesigned—two-stroke and four-stroke alike. There are four dual-sport bikes built on the same platform. The 350RR-S, 390RR-S, 430RR-S and 500RR-S differ only in displacement. They have double-overhead-cam motors, steel frames and Sachs suspension. The general description hasn’t changed for 2020, but all the details have. The chassis and bodywork have been redesigned with weight loss as the primary motivation. The fuel tank is slightly larger, and the whole bike has a new look. The motor doesn’t look that different from the previous one, but Beta engineers moved the crankshaft rearward and the clutch upward to group the big rotating masses closer to the center of the bike. The 500 motor actually displaces 478cc, just like before, and has separate compartments for the engine oil and gearbox oil. It’s a six-speed with fairly tall overall gearing. The motor is, of course, electric start only, but there’s still a plug in the right engine case where a kickstarter could go if you absolutely had to have one. A kit can be purchased from Beta for $400. At this point in time, though, very few people distrust e-start so much that they actually go down that path; it’s just nice to know you can. Suspension at both ends is by Sachs. The 48mm open-bath fork has been evolving every year since 2012, and now has to be considered as mainstream as anything from Showa, KYB or WP.

One very cool item that Beta puts on all its dual-sport bikes is a Trail Tech Voyager GPS. It actually serves as the speedometer and odometer as well. The tires are Michelin Enduros, which are DOT-approved knobbies.

BENEFITS OF BEING SMALL
As we said, the Beta 500RR-S is a fully legal street bike in all 50 states. It passes the noise tests, the emission tests and lighting equipment tests. Beta checked all the boxes and did everything by the book, but the “book” isn’t the same one that Honda, Yamaha or even KTM are expected to follow. As a result, the bike that you get from your Beta dealer isn’t as restricted as a Honda CRF450L or a KTM 500EXC. It might be quiet by dirt bike standards, but it’s still much louder than dual-sports from bigger companies. That gives Beta a big advantage in performance. Up front the most impressive aspect of the 500RR-S is power. It’s got plenty. There is no other 500cc dual-sport bike that even comes close. This is a bike that could roll straight to the start of a desert race and have a reasonable expectation of success, even with a long, high-speed bomb run. It might give away peak power to fully open, unrestricted race bikes, but it’s also very smooth and controllable down low. When it comes to tight, technical sections with lots of rocks and carnage, the Beta is much, much easier to ride than your typical closed-course competition bike.

The fuel mapping is certainly lean—that’s obvious from the slight popping on deceleration and the occasional cough. But that doesn’t seem to have any effect on performance. It stalls no more easily than any big four-stroke. The final gearing is 14-48, which is designed to be a good compromise between trails and roads. But, if you were going to ride it in more confined spaces, it would be worthwhile to install lower gearing. 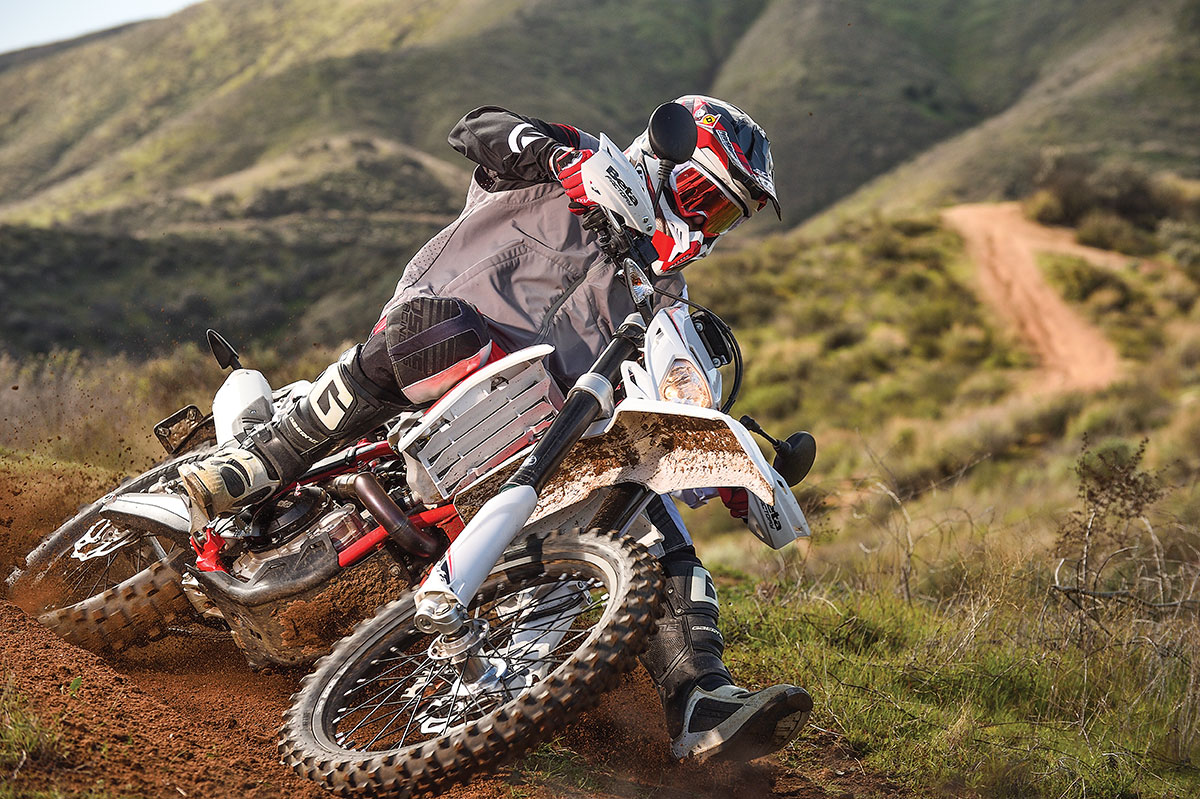 LIGHT IS RIGHT
Beta has been waging a war on weight for years now. Every season the bikes get a little lighter. The 2020 500RR-S is 250 pounds on our scale without fuel. That’s a couple of pounds lighter than the 430RR-S we tested last year. We’ve often praised KTM for being the lightweight champion of the dual-sport world, because the 2019 500EXC we tested was 244 pounds. It’s worth pointing out, however, that this was weighed with stock tires. The Continental TKC80 tires on the KTM are a good 5 pounds lighter than the Beta’s Michelins. As far as off-road performance, the Michelins are far superior. Once you put the same rubber on the two bikes, the weight difference is indistinguishable. Regardless of the number, you can tell that the Beta is a light bike. It’s easy to toss around and fun to ride. When a bike is light, everything works better. It goes up easily and goes down controllably. It accelerates with snap and stops without fuss. The Nissin brakes are surprisingly good and have now overcome any advantage in performance that Brembo brakes once had.

In the suspension department, we have to admit that Sachs has come a long way. The fork action is genuinely plush. It has a cushy feel at low speed yet doesn’t dive or bottom excessively when it’s time to go faster. Dual-sport bikes are always faced with the dilemma of having to serve too many masters. There’s no way to know if the bike will be used on dirt roads or in competition situations. Compromise is inevitable, and Beta took the bike in a softer, more comfort-oriented direction. If you ride fast and hard in real off-road environments, you’ll have to stiffen it up. As it is, the bike is well-balanced and soft. 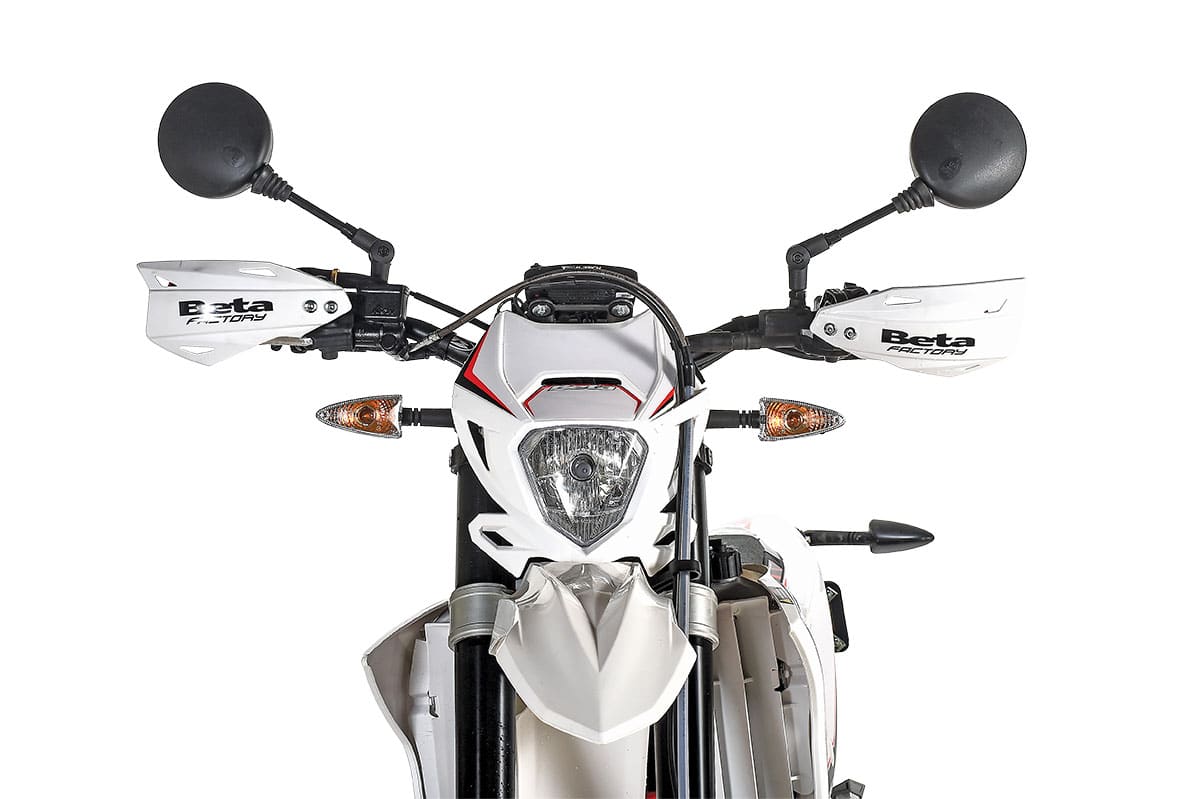 WEAKNESSES AND STRENGTHS
All dual-sport bikes seem to have under-designed DOT equipment. The Beta is no different. The taillight, rear blinkers and license-plate bracket flop around so much that we’re surprised every time they don’t fall off. The mirrors can be folded out of the way, but they can’t take a hit. On the other hand, we were pleased with the light produced by the headlight, and we love the GPS. All the essential components are indestructible. The hydraulic clutch has a great feel, a light pull and never fades. The battery has much more life than the one on last year’s Beta. The overall quality of the bike is high everywhere—from the rims to the chain to the bars and controls. 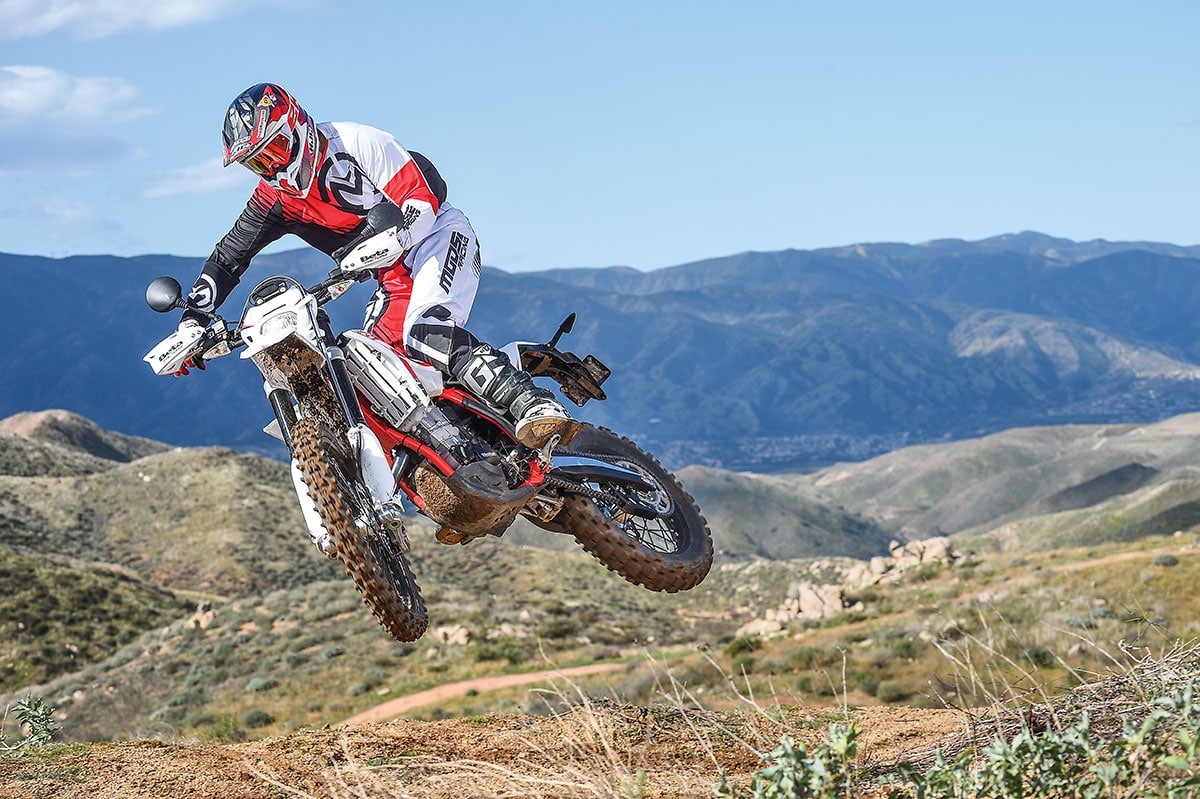 As always, Beta impresses us. The 500RR-S doesn’t seem like the product of a tiny, obscure company. It seems as expertly engineered and well-executed as anything from a large corporation. For 2020, the bike sets a higher standard than ever in the dual-sport world, and with any luck, it might provide the big corporations with something to shoot for in the years to come.

RIEJU (FORMERLY GASGAS) IS BACK WITH CENTRAL POWERSPORTS DISTRIBUTION