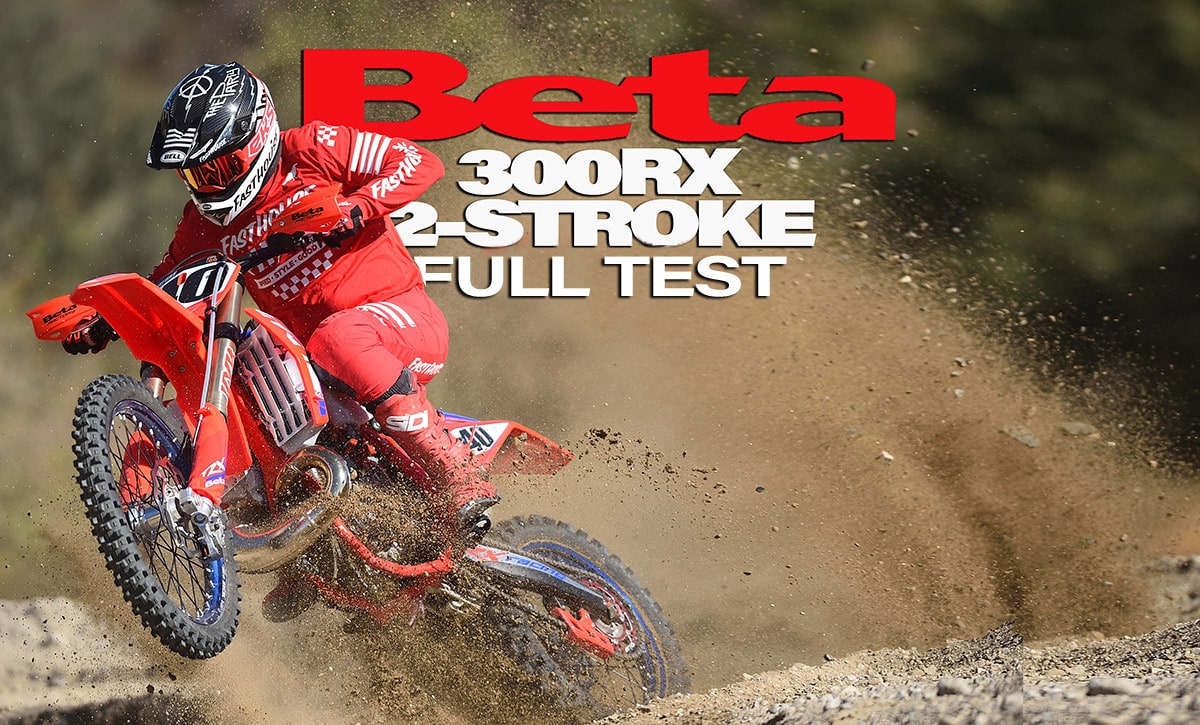 All motorcycles were project bikes at one time or another. Some start in garages and shops at the grass-roots level. Others get their initial spark at the factory level when someone has an inspiration and gets the go-ahead from above. Clearly, if enthusiasts are involved, the results are much better. That’s how the 300RX came to exist; it’s the result of people at the Beta factory outside of Florence, Italy, who know motocross and care about the result.

This is a project that we have often thought about initiating ourselves, mostly because it seemed so obvious. The Beta 300RR is an incredible off-road bike. It’s fast, light and it handles well. Why wouldn’t it make a great motocross bike as well? The people at Beta have had motocross on their minds for a long time, and they currently have an MXGP team with Jeremy Van Horebeek on a pre-production four-stroke. That’s a project in the works, but the 300RX two-stroke is here now. It first showed up in very limited quality in 2021 and has been improved since then.

If you’re familiar with the Beta 300RR off-road bike, you’re already somewhat familiar with the RX. In its off-road configuration, it has Sachs suspension at both ends, oil injection and a very smooth power delivery. In order to go moto, it was stripped down, given longer legs and more firepower. It lost oil injection and lighting, then got a different head and crank. The Keihin carb was up-sized from 36 to 38mm, but it’s essentially the same carb that comes on a Yamaha YZ250, only without the power-jet circuit. And, of course, the suspension was reconfigured. It got a different version of the Sachs shock with more travel. The Sachs fork was traded for a KYB closed-cartridge unit, also with more travel. It still has an electric starter, a 6-speed gearbox, a 2.5-gallon tank and handguards, all elements left from its off-road origin. The Beta also got a number of accessory upgrades, like a Supersprox rear sprocket, Michelin Starcross tires (a 19-incher in the rear) and little tidbits of bling from the Race Edition line.

If you aren’t familiar with Beta motorcycles, you’ll be impressed with all the standard stuff. It has a diaphragm clutch with Brembo hydraulics, Nissin brakes, machined triple clamps, push-button seat removal and a side-access airbox. The power valve is mechanically operated and externally adjustable. Since this is Beta’s first modern motocrosser, we couldn’t wait to see what it weighed without all the lights and stuff. We drained the fuel tank and put it on our digital scale. It was 230 pounds. For comparison, the Husqvarna TE300i (the one with the headlight) is 235 pounds on the same scale. The 2022 Husqvarna TX300 (The one with the air fork) is 223. We don’t yet know what the 2023 KTM 300SX weighs, but speculation is that it will be right around 230.

Confession: we didn’t come into this with high expectations. Beta is an off-road company. We remember all too clearly the days when KTM was an off-road-oriented brand, and its MX bikes were a little rough. The first test riders on the Beta came back with cautious praise: “You know, the motor’s pretty good.”

Before long, the praise was unqualified. The 300RX has one of the best two-stroke motors we’ve ever tested. First, there’s the outright power. It’s fast—maybe not 450 four-stroke fast, but easily as powerful as any stock 250cc two-stroke. The only 300cc two-strokes we have for comparison are either off-road bikes or over-bored 250s, both of which the Beta easily outperforms. The problem with most punched-out 250s is that they’re hard to start and they don’t rev. The electric starter makes the first complaint a non-issue, and as far as revs go, the Beta is good. On top it tapers off gradually rather than shuts down. Before that happens there’s deep midrange and bottom end. If you let the revs really drop, you still have that traditional two-stroke pulling power that four-stroke riders don’t understand. It’s almost impossible to stall, and the jetting is flawless. In truth, the 300RX would make a great off-road race bike. The guys at Beta know this and recommend the RX for cross-country racers.

We know two-strokes well enough to know that they can be touchy in different conditions. Most of our riding was done with the temperature in the 80s at 1800 feet MSL. Different temperatures and different altitudes can produce different results. Luckily, the Keihin PWK38 takes the most common brass in the carburetor world, starting with the 172 main jet and the 40 pilot jet. Even though we didn’t have to alter the jetting, it ain’t rocket science. We know that riders often adjust the power valve, which is easily done with a 5mm hex key. From our experience, there’s one right setting and infinite wrong ones. This is initially set at the factory and varies from bike to bike. On our test bike, the magic setting was 1.5 turns in from flush. Another variable that isn’t worth altering is the map switch, located in front of the gas filler. For motocross, the “sunshine” setting is best for almost everything.

For us, there was nothing too surprising about the Beta’s overall handling. Like we said, we’re very familiar with the 300RR, and this has the same frame. It’s an easy steering bike with good straight-line stability, not too far removed from a modern KTM. The RX’s increased suspension travel results in a tall seat height and moves up the center of gravity slightly compared to the off-road model. Beta tried to compensate for this with a super-thin seat, but the bike is still taller than typical motocross bikes from Japan or Austria. The increased CG makes for a slightly different feel in turns and actually increases high-speed stability. Overall, we can’t complain, because the bike still feels light and turns quite well.

The suspension is quite different from that of the off-road model, though. It is, of course, stiffer, but not that much stiffer after a little break-in. The thin seat throws a few false signals to the rider because it’s also quite hard, and that makes the rider instinctively attempt to reduce compression damping. The standard low-speed setting for the shock is already 22 clicks out, and as it turned out, less damping didn’t make the seat any softer. We found that a little more damping (18 clicks out) was more of a happy place for typical tracks. In the fork we went through the same process, initially reducing damping and then finding we went the wrong way. The KYB fork comes with a 4.5 N/mm spring, which is actually softer than a Yamaha YZ250F. We found that we could use all the travel without trying too hard. We ended up with a little more compression damping than stock (from 8 to 6 clicks out) and were pretty happy. Overall, the stock suspension is in the ballpark for motocross. Who would have guessed?

The Beta is still a very off-beat motorcycle, and you can obsess on stuff that’s slightly out of the ordinary. The motor vibrates a little, the gas tank is a little wide and the side number plates are preposterously small. You can just as easily point out pleasant surprises. The gearbox has excellent gear ratios for motocross, plus the bonus of a sixth gear if you need it. The O-ring chain is another off-road bonus that’s welcome. And then there’s that sound. The exhaust note of the 300RX is the sweetest sound in all of motocross.

The fact that Beta’s first real motocross attempt is this good right out of the box is nothing short of incredible. It has us wondering and looking forward to Beta next big reveal in the MX world. We have already heard some great things.