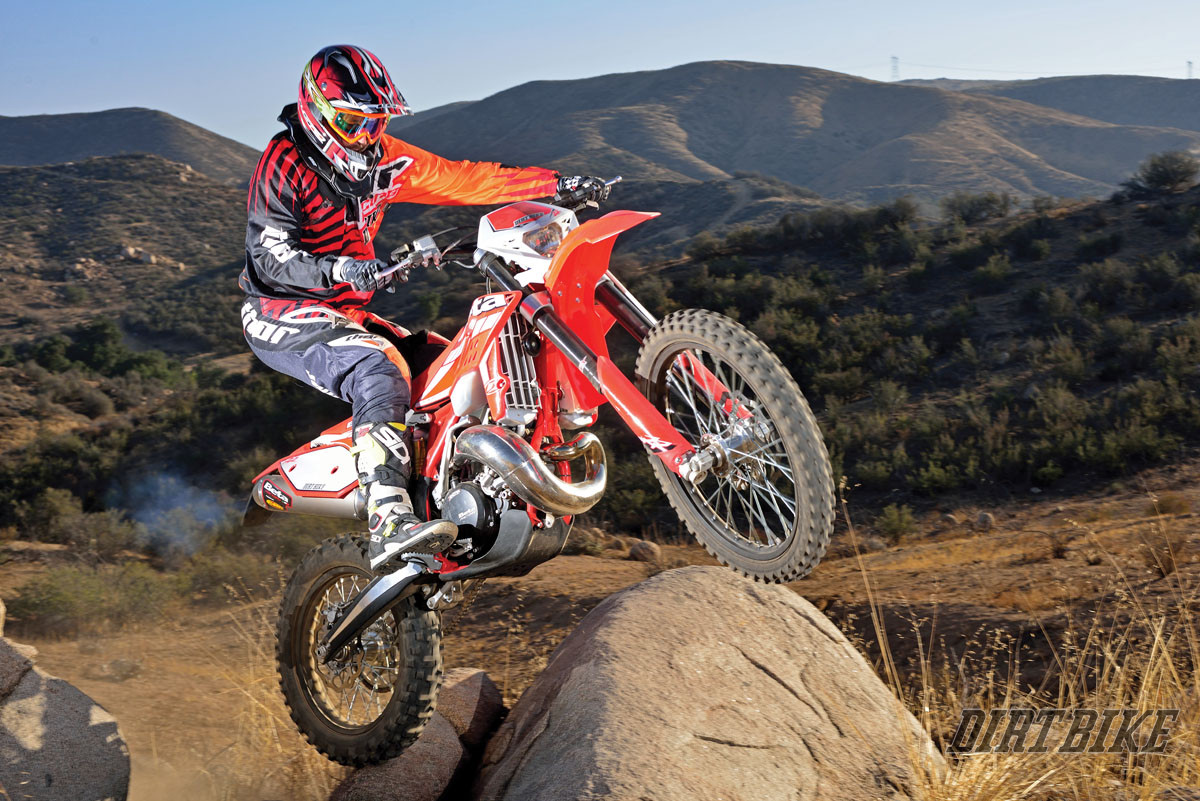 The two-stroke uprising is alive and well, though there really isn’t much to rise up against. Motorcycle manufacturers continue to sell two-strokes in big numbers, and European companies like Beta continue to invest in new tooling and new technology, banking on the fact that the two-stroke will continue to appeal to off-road riders for a long time to come. Even so, the underground continues to meet in secret and discuss its return to power.
When the revolution finally occurs, two-stroke supporters will at least be well-armed with hardware like the Beta 300RR. The 300 is a modern motorcycle that is now in its third year of production, and it’s an effective combination of modern construction and old-world craftsmanship. Even though it’s a new motorcycle, it has years of evolution and refinement behind it. Beta shows the two-stroke engine in its very best light.
WHO ARE THOSE GUYS?
It’s okay to quote Butch Cassidy and the Sundance Kid whenever you talk about Beta and say, “Who are those guys?” Every time you look, Beta is doing something fairly amazing. Cody Webb had a bunch of EnduroCross main-event wins on a 300RR in 2014. That makes him about the only man to win national events on a two-stroke, not to mention one not made in Austria or Japan. And yet, no one quite knows who Beta is. For the record, Beta is an Italian motorcycle company, and even though the motorcycle itself is new, the company is not. It was already old when it started in the motorcycle business with scooters after World War II. Trials bikes came in the 1980s. About 10 years ago, Beta started making off-road bikes, which at first had KTM motors. Now they are 100 percent Beta, which is weird in itself. The finish and refinement of the current motorcycles seem more like the product of a big Honda-like company than the limited-production offerings of a small Italian firm. 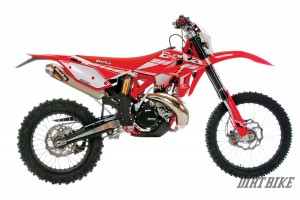 The three-year-old Beta 300RR motor is fairly similar to that of the KTM 300XC, as well as the Husqvarna TE300 tested in this issue. In fact, it shares most of the same specifications: 293cc displacement, 72mm bore and stroke, six-speed gearbox, 36mm Keihin carburetor and Kokusan ignition. But, it’s obviously a newer motor; if nothing else, the position of the electric starter demonstrates that. Beta places it inside the engine case, under the gearbox. KTM still houses it externally as if it were an afterthought. It has a case reed and a mechanical power valve, just like the KTM. The only clue that the Beta is made by a much smaller company is that it’s a world-spec bike. The 300RR sold here in the U.S. is the same as the ones sold in Italy, Bombay and Botswana. It comes with DOT tires, a horn and various other street-legal accessories. You might be able to get it licensed in Vermont, Arizona or some other run-what-you-brung state, but as far as the federal government is concerned, it’s a closed-course motorcycle, just like a Honda CRF450R motocross bike. This year the engine got a few updates, including a cylinder and head that were offered last year on the limited-production Race Edition. The power valve and ignition map also received changes.
Beta uses a steel frame mated to Sachs suspension. In case you’re curious, yes, it is that Sachs. It’s the same German company that made motors for KTM back in the Penton days (the motorcycle industry is pretty small). The brakes are by Nissin and the tires are Michelin. All good stuff. 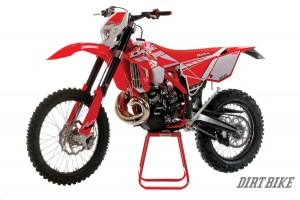 A BETA EXPERIENCE
Of all that background information, the one fact that you need to take home is this: Beta is a trials bike company. That’s where the bulk of the company’s experience comes from, particularly with two-stroke engines. That’s how Beta ended up with Cody Webb; he was the 2010 U.S. trials champion on a Beta trials bike. The 300RR has an obvious bent in that direction. It is designed to snake its way through the tightest trails where the “good” lines still have rock ledges and tree stumps. The Beta is all about bottom-end power and smooth throttle control. We often say that about other two-strokes, too, particularly the KTM 300, but the Beta pushes that trait to a whole new level. The power can be metered out in even more precise levels. Carburetion is a little cleaner down low than on virtually any other off-road bike on the planet. You could, in fact, install the 300RR motor straight into a trials bike and not do half bad.
When there’s a little more open space, the Beta ramps up to healthy midrange power and far more peak output than any real trials bike, but then it runs out of revs on top and begs for a shift to the next gear. The Beta doesn’t rev as high as the Husky 300, and, obviously, redlines way earlier than any of the four-strokes that it might find in the same class, but the bike also feels lighter than just about anything in its class. On the fantastically accurate and tastefully appointed Dirt Bike super scale, the Beta weighs 235 pounds without fuel, which is within a pound of the Husqvarna TE300. Most riders say it feels lighter than the Husky or KTM. The Beta is very narrow and compact, and the steering is very light. Its most distinctive handling trait, however, is its super-cushy suspension. This is the trials bike influence emerging again. It sucks up rocks, pebbles and acorns like they aren’t there. That only adds to the bike’s effectiveness on slow-speed, technical trails. If you ride rocky stuff with someone on just about any other bike, you’ll wonder why he’s getting thrown around so much in places where you and your Beta can go perfectly straight. And at the end of the ride, you’ll be amazed how fresh you feel. Soft suspension is the key to that kind of riding.
Once again, the magic begins to fade as speed increases. If you venture into wide-open spaces or perhaps out on a motocross track, the Beta is soft enough to keep you from riding too aggressively. The Sachs suspension components don’t bottom harshly, but you tend to have half of the travel used up with just hard braking and acceleration. Handling-wise, it’s perfectly stable at speed, but if you more typically find yourself riding in fourth, fifth or sixth gear, you might have to stiffen things up.
THE REAL MAGIC
Where the Beta really excels is in the details. The hydraulic clutch has the lightest pull in the off-road world. The seat can be removed with the push of a button. The levers, bars, rims and chain are all first-class items, not just cheap components made for the showroom. The pipe and silencer are by FMF, and the reed is a Boyesen. It’s as if most of the highest-quality aftermarket parts are already on the bike, leaving very little for you to add. Well, you could add some handguards, but that’s about all.
The price reflects that, of course. The Beta sells for $8199. It should be even more expensive. The Euro is very high compared to the dollar. Beta is too small to enjoy economies of scale and there are no corners cut anywhere, yet the 300RR is around $400 less than a KTM. If anything could force the two-stroke underground to the surface, this is it. o 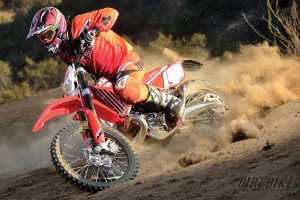