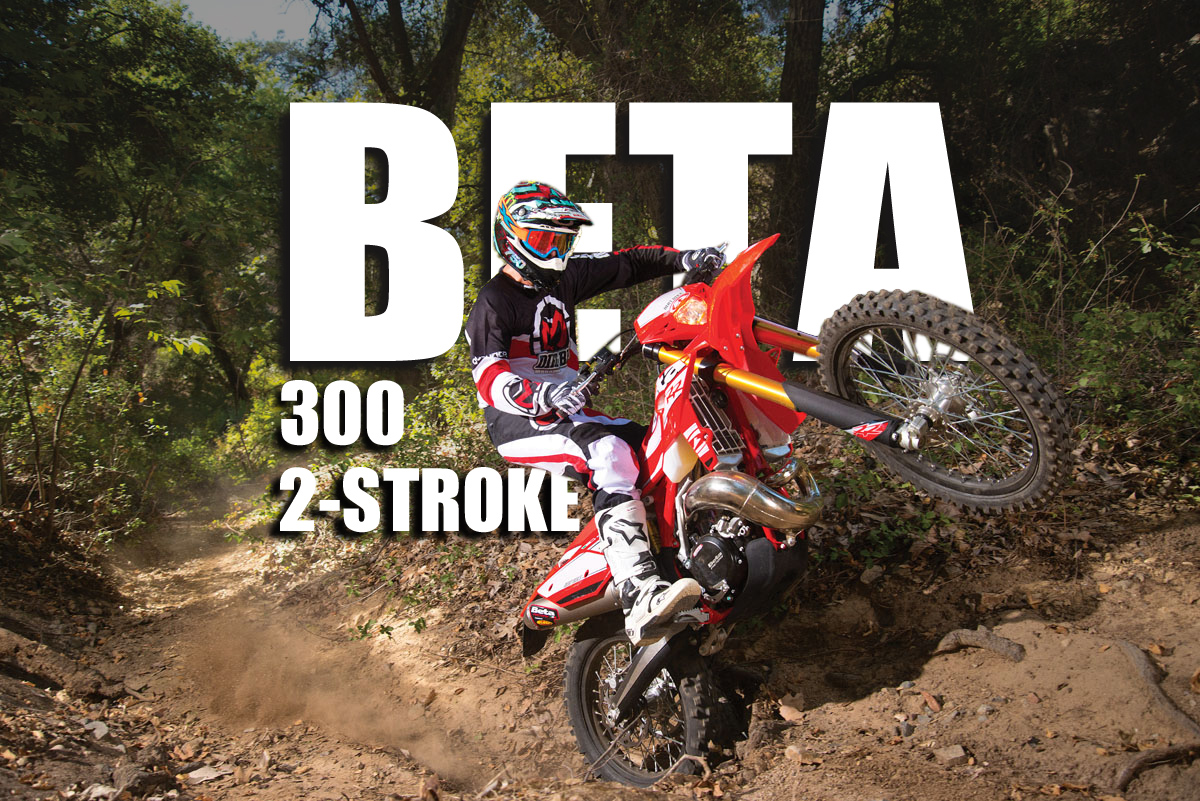 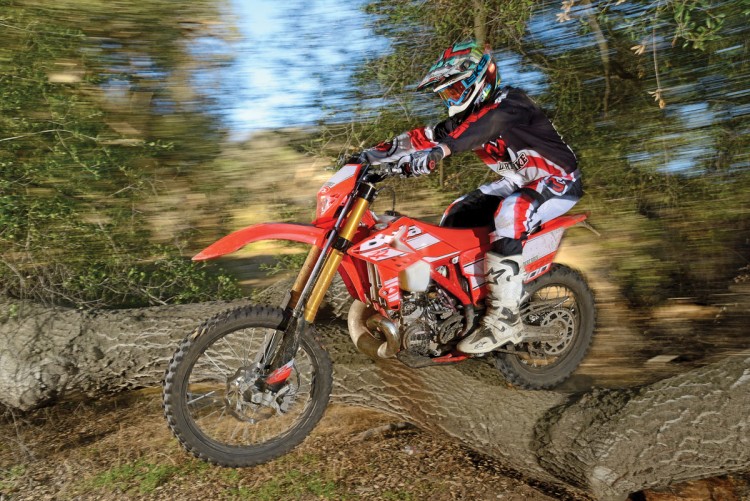 Beta is an Italian manufacturer that has almost made the transition from being a small family-owned company producing hundreds of motorcycles in a calendar year to a large corporate manufacturer producing thousands. Its popularity in the United States has been helped by strong finishes in various off-road events across the country, including a national EnduroCross championship in 2015. Beta has an off-road core dealership network that is over 100 dealers strong, with representation in Alaska and Hawaii. With targeted changes to the 300RR for 2016, could this be the bike that raises Beta to the next level? 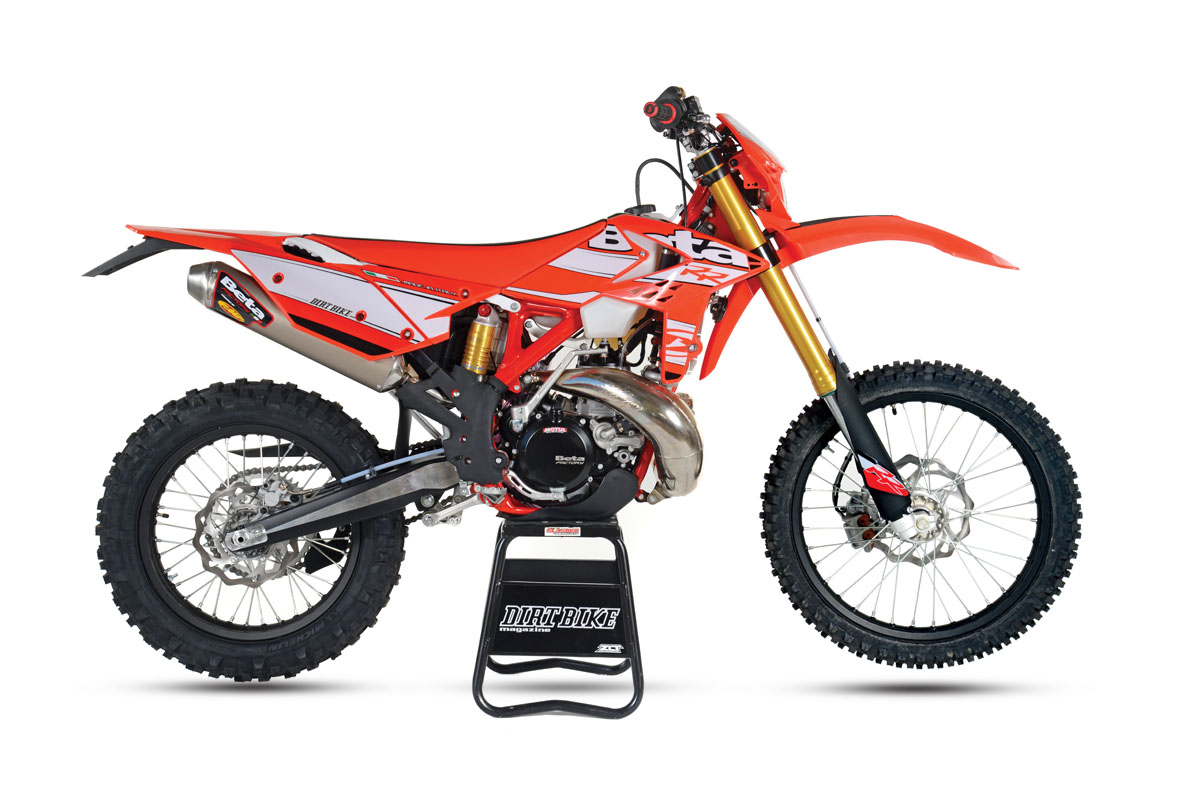 THE GOODS
Beta’s big news for 2016 is the introduction of an electronic oil-injection system on its 293cc, liquid-cooled, Beta Power Valve-equipped, electric-start engine that is in the 300RR model. This system was introduced in 2015 on the 300cc Xtrainer model with great success, so Beta decided to incorporate it on all the two-stroke models for 2016. The new feature ensures a very precise fuel-oil mix under a wide variety of conditions and engine speeds while saving riders from having to mix oil and gas manually. Beta’s oil-injection system drastically reduces oil consumption and reduces the amount of smoke that is emitted from the exhaust. The system is managed by an ECU with and integrated mix and engine control that is able to measure the oil needed based on the engine’s revs and engine load measured by the Throttle Position System (TPS). The oil tank is located under the seat, so the seat must be removed to fill the tank, but that is made easy by the quick-release button located at the rear of the seat. An oil light located on the handlebar-mounted electronic odometer illuminates when more oil is needed. Beta remapped the ECU on the 300RR for 2016 to provide more performance higher in the revs and to refine the low-end power and torque that the bike already made. The fuel is introduced into the engine through a Keihin PXL 36mm carburetor.
The double-cradle-style steel main frame received a redesigned top shock mount. Beta wanted to improve the overall strength of the frame, as well as rider feel and comfort. The airbox has been changed to improve drainage. If water finds its way inside, it will quickly drain and not get sucked through the air filter into the engine. New airbox cover fasteners are used for a more secure and dependable seal.
Beta uses 48mm Sachs USD forks with adjustable compression and rebound damping that incorporates TFX technology. For 2016 Beta increased the size of the cartridge bleed hole to allow more oil flow during bottoming. Other changes to the fork include a longer spring guide designed to provide smoother action and a new top-out spring for added durability. The aluminum-bodied Sachs shock received setting updates and still features adjustable rebound, along with high- and low-speed compression-adjustment capabilities. Both the forks and shock are hard-anodized a matching gold color.
Other notable items that come stock on the 2016 Beta 300RR include an FMF nickel-plated pipe with silencer made to Beta factory specifications and Galfer brake rotors front and rear with Nissin braking components. The 300RR is also equipped with a Magura hydraulic clutch system. Michelin competition tires (18 inches in the rear and 21 inches out front) are mounted on the powdercoated rims with polished aluminum hubs.

The true strength of the Beta 300 is in really ugly conditions. The motor is unstoppable down low. As long as you keep the throttle slightly open, it will not stop, will not stall and will not fail. This is something that a rider from the four-stroke age just can’t understand, and it changes the way you ride. The jetting is perfect. There are no hiccups or misfires like we remember from the old two-strokes of past.
The Beta 300RR is a beautiful bike with loads of Italian style and craftsmanship on display, just like a fine automobile. It has good, usable power down low and pulls strong through the midrange. This is not a top-end horsepower-making engine. There is power up top; it’s just not a high-revver. Considering its power characteristics, the Beta works best when you short-shift when going through gears. The 300RR is in its element on tight technical trails using first through fourth gear. This seems to be where the engine power characteristics and chassis work in unison, producing magic. At higher speeds, like fifth and sixth gear, the chassis gets busy. Big high-speed hits or G-out-type situations are not strong points for the Sachs suspension; it blows through the stroke on both ends, bottoming without much resistance. We were surprised by how well the 300RR worked on a moto track. Yes, it was pretty soft, and short-shifting to stay in the meat of the powerband was a must, but the overall package was fun to ride. Some of our taller test riders found the Beta’s rider compartment a little cramped, but all would agree it was light- and nimble-feeling on the trail. We love the electric start with back-up kickstarter option—not because we like to kick-start bikes, but because it’s always nice to know if the battery is disabled you’re not stuck on the trail. Overall, the 2016 300RR is a blast to ride. The tighter and gnarlier the trail is, the better it performs. With some refinements in key areas, this two-stroke platform could be just what Beta needs to make that jump up to the next level.

DUNGEY VS. ROCZEN IN INDY