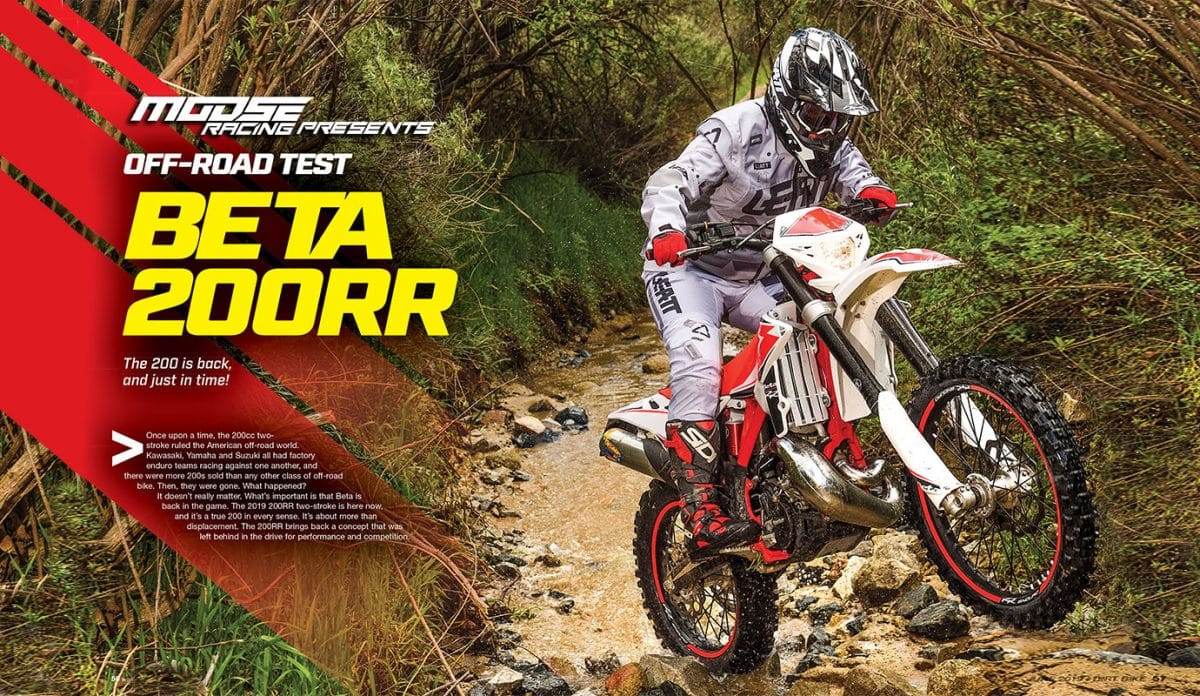 We don’t know why the 200 class disappeared, but what’s important is that Beta is back in the game. The 2019 200RR two-stroke is here now, and it’s a true 200 in every sense. It’s about more than displacement. The 200RR brings back a concept that was left behind in the drive for performance and competition 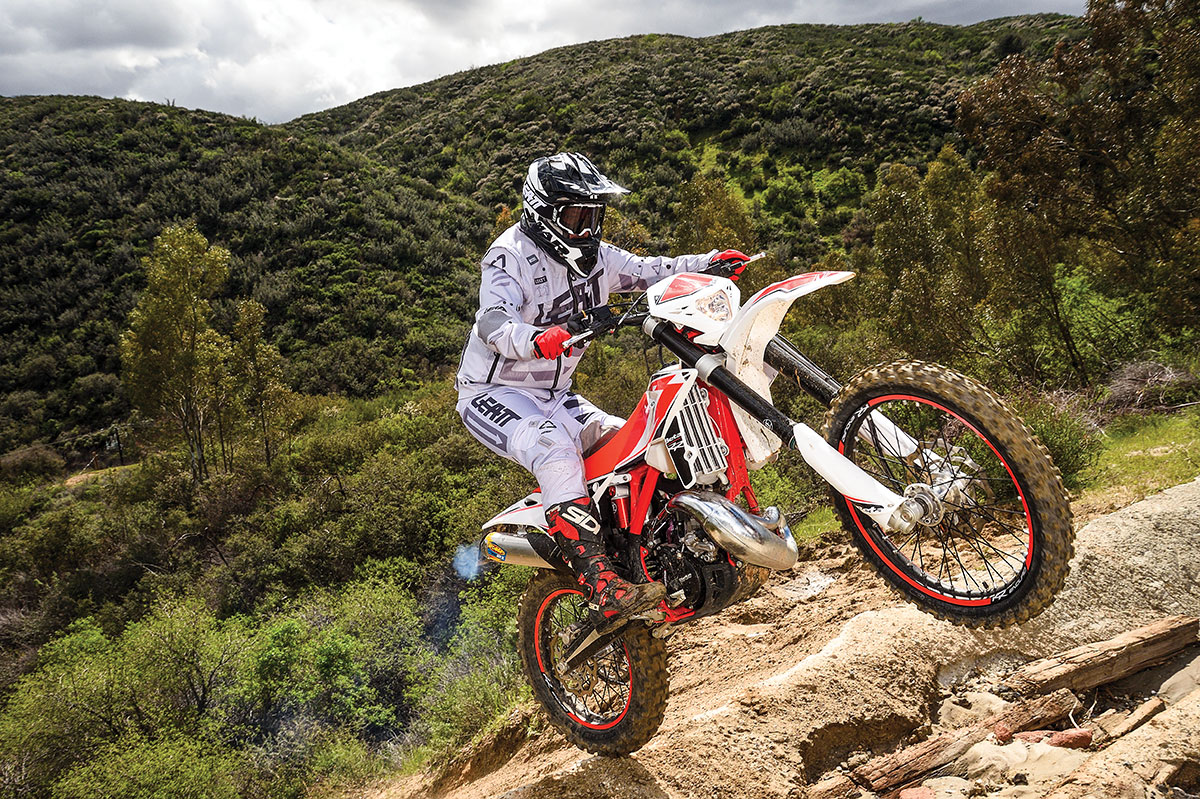 THE 200 PLATFORM
Last year Beta came out with a new 125 two-stroke that was more or less demanded by the European market. Over there the 125 two-stroke class never really went away, even in the off-road world. Oddly enough, Europeans never really warmed to the 200, while Americans didn’t understand why anyone would want to ride a 125 off-road. So, the design team that built the new Beta 125 was tasked with making a 200 as well, using as much of the same design as possible. You can’t just punch out a 125 that far, so it took different cases and a new top end with a different bore and stroke. But, the same layout was used with many of the same parts in the lower end. The 200 got electric start as standard equipment with an optional kickstarter, whereas it was the other way around on the 125. The motor uses a mechanical power valve, a V-Force reed and a Keihin PWK 36mm carb. Engine lubrication is accomplished through Beta’s oil-injection system. There’s an oil tank under the seat and various safeguards to keep it from running dry.

The frame is directly from the 125. It isn’t a 300RR frame, and it isn’t the frame from the Xtrainer. All of those frames are very similar. They have a steel backbone, linkage rear suspension and identical aluminum swingarms. They have slight differences in seat height and ground clearance. The 200 is actually larger than the Xtrainer and smaller than the 300, if only by a very small amount. The suspension is built by Sachs. In the rear, the shock is more or less conventional with separately adjustable high- and low-speed compression, as well as rebound damping. The fork is a little more unusual. It has a single spring in the right side with a large preload adjuster that can be operated by hand.

200 REASONS
The fall of the 200 class will be a mystery forever. It’s the perfect displacement for a trail bike. The 200RR has excellent overall power, a soft hit and decent low-end torque. You can lug it down just like a 250 or 300 two-stroke without fear of stalling, and the jetting is perfect. In the heyday of the two-stroke, if we had Beta engineers jetting all those RMs, CRs and KXs, they never would have gone away. Every bike in Beta’s two-stroke line is like this, with smooth, glitch-free carburetion. There’s no detonation, no lean surge and no missing.
If you’re used to a bigger two-stroke, you will have to shift a lot more often. You lose the ability to go from a dead stop in second or third. The 200 has a gear for every purpose, and you don’t have much room to modify that plan. First is a granny gear for the tightest situations. Second is for slow trail and so forth. The bike is a decent hill-climber, but you have to downshift on the fly. That’s the way 200s always were, but this one has much more power than 200s from the old days. It will outrun most stock 125s and is still much more forgiving down low. The real appeal of a 200cc two-stroke isn’t the power as much as the friendliness. The bike is very easy to ride. You tap the electric starter, it lights up and you ride away. There’s no quirkiness, hard starting or cold blood. It’s also easy to handle for reasons that are a little mysterious. The bike feels super light and maneuverable. This has little to do with its actual weight; it’s more about the gyroscopic effects of a spinning crank. Four-strokes and larger two-strokes are slaves to the forces created by large, spinning flywheels, and the fact that they want to hold their place in space. The 200 has fewer of those invisible forces at work, so there is less work for the rider to do.
On the scale, the 200 isn’t quite as light as it feels. It weighs 221 pounds without fuel. That’s about 11 pounds heavier than the 125, which has no electric start. Most riders say it feels more like a 125 in the 200-pound range.

WHO IS IT FOR?
As it’s set up, Beta clearly aimed the 200RR at younger riders. The shock and fork are very soft. This is understandable, but back in the old days, the KTM 200 was wholeheartedly embraced by older, heavier riders. If you’re one of those, you might have to bump up the springs. The preload adjuster on a Sachs fork is much more effective than devices like this have been in the past. You can crank it down, and chances are you will be happier if you weigh more than 140 pounds. Stiffer springs would be a better solution. We also made a few other mild modifications at the recommendation of the guys at Beta. We swapped out the 14-tooth countershaft sprocket for a 13 to bring second gear into play a little earlier. This might have been too big of a jump, but it did result in less shifting on most rides. An FMF silencer was also used simply because it has a spark arrestor and the stock one doesn’t. This is common with modern two-strokes. When the bike is imported, U.S. Customs officials view the spark arrestor as evidence that the bike will be used off-road. Since the 200 is imported under the rules for closed-course competition bikes, as are all two-strokes, that would create some bureaucratic hurdles. We also added handguards. 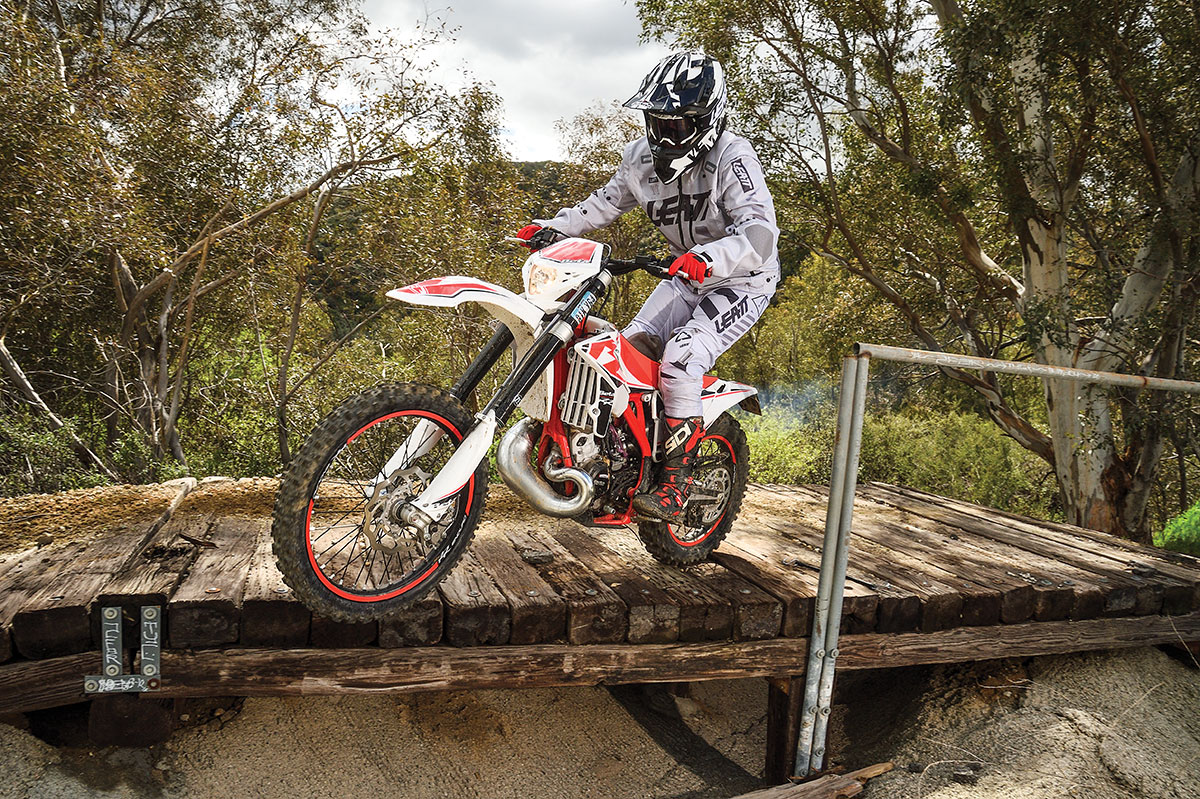 BETTER BETA
If you pay attention, you know that we’re big fans of small-displacement two-strokes here at Dirt Bike. We loved the KTM and Husqvarna off-road 150s (actually 144cc), and we love the Beta 200. It brings a little more to the table than the smaller two-strokes, but doesn’t give away any of the fun factor. Hopefully, we will have the Beta and its Austrian-made competition together for a comparison in the near future. If nothing else, it will be a great ride.