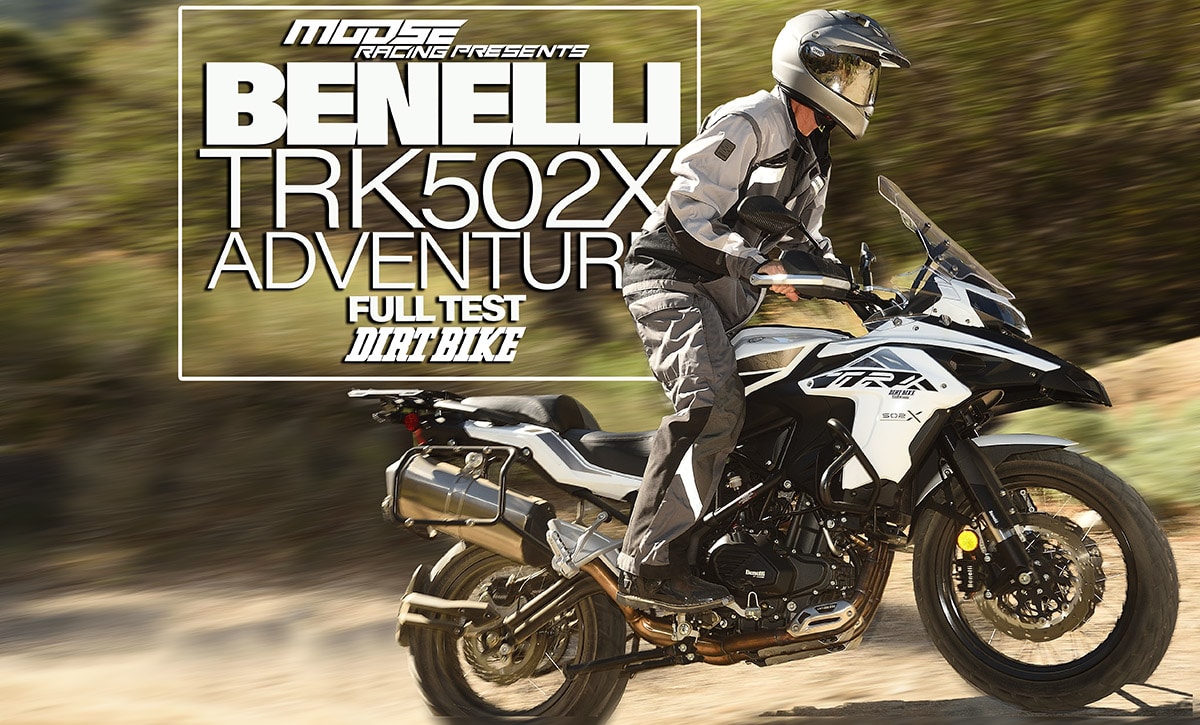 Benelli is a member of the Century Club—a group of motorcycle companies that are over 100 years old. Yet, in the U.S., the brand doesn’t have the iconic ring of Husqvarna, Harley-Davidson or Indian. Benelli motorcycles were never imported in large numbers under the company’s own name. For a period, they were sold by Montgomery Ward under the name “Riverside,” but even that was somewhat obscure. Still, Benelli’s impact on the motorcycle world as a whole was vital. The company gave us mini-trail-like beginner bikes before Honda, as well as a six-cylinder street bike—also before Honda.

As with most of the 100-year-olds, you can’t draw a continuous line of production from the beginning until now. Things like World Wars and global economic crises have a habit of interrupting company bloodlines and creating new ones. Whether or not the original company is the same one that makes the 2021 TRK502X is a debate for another day. Now, Benelli motorcycles are manufactured in China and engineered in Italy. In the U.S., Benelli products are distributed by the same people who sell SSR motorcycles. The most substantial bike under the Benelli name we’ve seen so far is this one: the TRK502X. It’s a 500cc, twin-cylinder adventure bike that’s designed to fill in the gap between all the new 300-class machines (such as the BMW 310GS, the KTM 390 Adventure and the Kawasaki Versys 300) and the more mainstream 650s (e.g., the Suzuki V-Strom and the Kawasaki 650 Versys). The main attraction is the price: $6399. The Japanese 650s are just under $9000, while those 300cc singles generally sell for just under $6000 (and are made in either Southeast Asia or India). The closest in price and displacement is the Honda CB500X, which sells for $7000 and is a virtual strippo.

A LAP AROUND THE TRK
It’s clear that the Italian connection is for real. The Benelli looks more European than Asian. The lines are similar to a Moto Guzzi or MV Agusta—and the finish quality might even be a step higher. The days when you could spot a product made on mainland China just from outward appearance are gone. The castings, the paint and the fit are all great. The motor is fairly simple by the standards of modern ADV bikes. It’s a fuel-injected DOHC parallel twin with a 270-degree crank. The exhaust is a two-into-one system with a note similar to that of a Honda Africa Twin. As far as we know, the motor is 100 percent original. It’s not a copy or a “splash” of anything else.

Even though the motor is narrow and compact, the bike as a whole is large. The frame is a steel trellis design with a direct-to-swingarm shock. It’s pretty much decked out with everything from a full-size frame-mount fairing and windscreen to crash bars and aluminum wraparound handguards. The fuel tank holds 5.3 gallons, all up top. It comes with a center stand and a large luggage rack. Our test bike also came with Benelli’s in-house three-piece accessory aluminum bags, which sell for $1000. The quality seems as good as anything from Touratech (for about half as much). Adding to the Euro vibe are the Metzeler Tourance tires (19-inch front and 17-inch rear).

ADVENTURE ME
When you ride the TRK on the road, the most striking thing is how comfortable it is. The motor is almost vibration-free at highway speed. It spins at about 5000 rpm in sixth gear at 70 mph, which sounds high compared to big 1000cc twins, but you’re barely aware that the motor is running. The seat is good, and the wind protection is excellent. In terms of power, it’s no Multistrada, but it’s not bad. It accelerates effortlessly from a stop without any EFI glitches and has just enough snap to be fun. This is where the 300s in this price range fall horribly short. The Benelli might not wow you with its power output, but you aren’t constantly reminded about how much power it doesn’t have, either. Consider it a very close match to the Honda CB500X.

Off-road, the Benelli is a handful. It’s much physically larger than the Honda 500 and even the Kawasaki and Suzuki 650s. Most of the feeling comes from the high placement of the fuel tank and the fairing. It’s also heavy. We haven’t actually weighed it yet, but it should be in the same territory as a Yamaha T7 (450 pounds). There’s no off-road engineering in terms of suspension adjustment beyond rear spring preload. In fact, the only off-road concessions are the spoked wheels, the footpeg teeth and the overall handlebar/footpeg/seat relationship. All those things, as well as overall styling, make the bike identifiable as an ADV bike, but it’s still pretty awkward on anything more challenging than a flat dirt road. There’s no means to disable the anti-lock braking and, of course, no traction control. The one saving grace in this area is the power delivery. It’s so smooth and friendly that you don’t really need traction control. And, in the dirt, it feels like it has tons of power.

The fact that the Benelli isn’t much of a dirt bike is forgivable. No adventure bike in this price range is. The TRK502X is by far the most substantial ADV bike you can get for less than $8000. Would it be a good bike for a project? Normally, we would say no for any bike with such a low initial purchase price. Our habitual thinking is that it’s too easy to turn a $6000 bike into a $12,000 bike and still have very little return on the investment. The Benelli makes us rethink that notion. The aftermarket world will probably soon offer suspension products and exhaust systems that will make it comparable to a V-Strom. This is a bike that’s worthy of further investment. Or, you could just ride it as is and spend what’s left over on your trips. That’s the one essential ingredient that defines ADV riding. It’s more about where you go than what you use to get there.