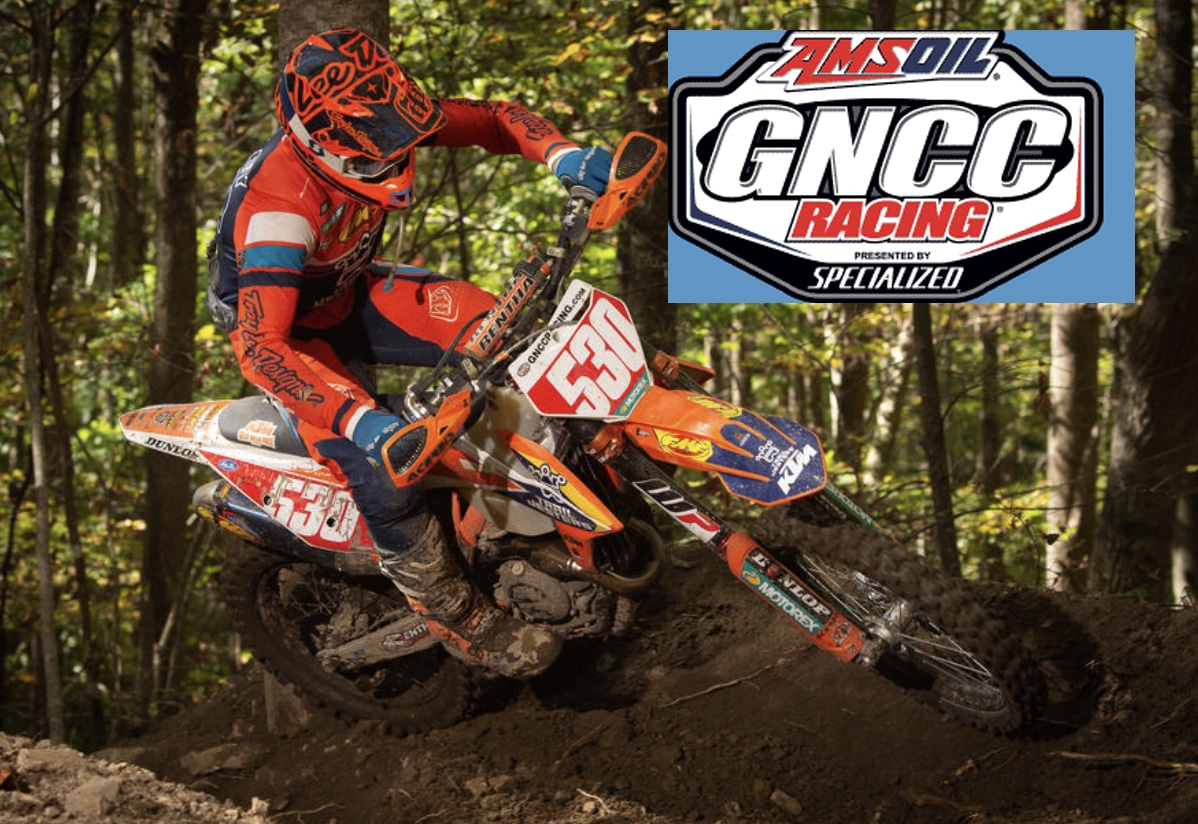 BECKLEY, W.Va. (October 14, 2019) – The 2019 AMSOIL Grand National Cross Country (GNCC) Series presented by Specialized, an AMA National Championship concluded yesterday, October 13 at Summit Bechtel Reserve with the penultimate round, Yamaha Mountaineer. After being unable to finish out the day due to a practice crash earlier in the week, FMF/KTM Factory Racing’s Kailub Russell would still secure his seventh-career GNCC Overall National Championship one round early.

Coming through to earn his first-ever overall win, and after only his second time competing in the premier XC1 Open Pro class was Trail Jesters/KTM’s Ben Kelley. Kelley would start at the front of the pack, coming through third on the opening lap, and he would remain consistent throughout the duration of the three-hour race. On the last lap Kelley would make the pass for the lead and push himself to the finish line, coming through the checkered flag two minutes ahead of the competition. Kelley is the first competitor to earn an XC2 National Championship, and XC1 overall win in the same season.

Earning the final spot on the overall podium at the Mountaineer was FMF/KTM Factory Racing’s Josh Toth. After injuring his leg halfway through the season, Toth returned at round 11 and was determined to return to the front of the pack before the end of the season. Toth battled through the elements and fellow competitors to place himself in third overall when the checkered flag flew.

AmPro Yamaha/Moose Racing/Parts Unlimited-backed rider Ricky Russell would come through fourth overall in West Virginia. Russell, who has found himself on the podium at the last two rounds, would have a rough start battling through the terrain. Russell would move into the fourth place position during the final lap of competition.

With a fifth place overall finish on the day was Rockstar Energy/Factory Husqvarna Racing’s Trevor Bollinger. Battling for the duration of the race, Bollinger would swap the fourth and fifth place positions multiple times. Returning from a two-race hiatus due to an injury was Babbitt’s Online/Monster Energy/Kawasaki’s Josh Strang. Strang found himself just outside of the top five, finishing sixth in XC1 and seventh overall on the day.

Phoenix Honda Racing’s Andrew Delong came away with seventh in the XC1 Open Pro class. Delong would find himself back in the 10th place position at one point in the race, but would put his head down and push towards the front. Delong sits seventh in the National Championship standings as the series heads into the final round. Babbitt’s Online/Monster Energy/Kawasaki’s Jordan Ashburn would start the day out by grabbing the All Balls Racing $250 XC1 Holeshot Award. Ashburn would come through eighth in XC1 to finish out the day.

FXR/Husqvarna/SRT/Hoosier’s Layne Michael would start back further in the pack, but would manage to move up to ninth in his class, with a 12th overall finish position on the day in West Virginia. After leading the entire race, Tely Energy Racing/KTM’s Steward Baylor Jr. would run into trouble on the final lap of the day. Baylor Jr. would find himself unable to cross the finish line, landing 10th in the XC1 class.

Taking his first XC2 250 Pro class win of the season was Coastal Racing/Husqvarna’s Craig Delong. Coming through fourth on the opening lap, Delong was on a mission to take a class win. Delong would put his head down and push throughout the entire race, and by the time lap four came around he would be in the lead. After taking the lead, Delong would ride his own race placing a gap over the other XC2 competitors.

Factory Beta USA’s Michael Witkowski would earn his fifth XC2 podium finish of the season in West Virginia. Witkowski started at the front of the pack, coming through third on the opening lap. Witkowski would continue to battle, and move his way to second in the class on lap five. Rounding out the XC2 class podium Solid Performance KTM/Moose Racing/Kenda Tires’ Ryder Lafferty. This was Lafferty’s first podium appearance of the season.

Earning the class win, and his second-straight FMF XC3 National Championship was Trail Jesters/KTM’s Jesse Ansley. Ansley would return to the center of the podium after battling the terrain and fellow competitors in the XC3 class. Earning a podium finish once again is XC Gear/Enduro Engineering/Husqvarna’s Jake Froman. Froman would run a consistent race, coming through second in his class. KTM’s Jason Lipscomb rounded out the FMF XC3 podium.

Rockstar/Husqvarna/Moose Racing/Shaw Wines’ Tayla Jones earned her eighth WXC class win, and currently sits second in the points standings as the series heads to Ironman for the season finale in two weeks. KTM/MEPMX/Fly Racing’s Mackenzie Tricker came back after missing the last round to land a second place finish. Tricker holds onto third in the points standings. Currently leading the points is Fly/Maxxis/Pro Circuit/KTM’s Becca Sheets, who came through to round out the WXC class podium in third. Sheets and Jones will go head-to-head at the AMSOIL Ironman GNCC in two weeks to see who will take home the WXC National Championship.

In the 8 a.m. youth racing it was Team Green Kawasaki’s Grant Davis moving up to the YXC1 Super Mini Sr. class and taking his first youth overall win of the season. Trail Jesters KTM’s Brayden Nolette would come away with another second overall in the youth, and second in his class. Husqvarna’s Parker Todd rounded out the top three youth overall riders at the conclusion of the race.

GNCC Racing returns in two weeks with the season finale at Ironman Raceway. The AMSOIL Ironman GNCC will once again be a Race for the Cure event, so wear you’re PINK! Live entertainment from Davisson Brothers Band will take place on Friday at 9 p.m. with Craig Morgan hitting the stage Saturday night at 9:30 p.m. For more information on the event, click HERE.

The 2 p.m. pro ATV race and 1 p.m. pro bike race are both broadcast LIVE on the Internet via Racer TV on www.racertv.com both Saturday and Sunday. A highlight show featuring the event will air on NBC Sports Network on Sunday, November 17 at 2 p.m.