BEN KELLEY TAKES HIS SIXTH GNCC IN A ROW! 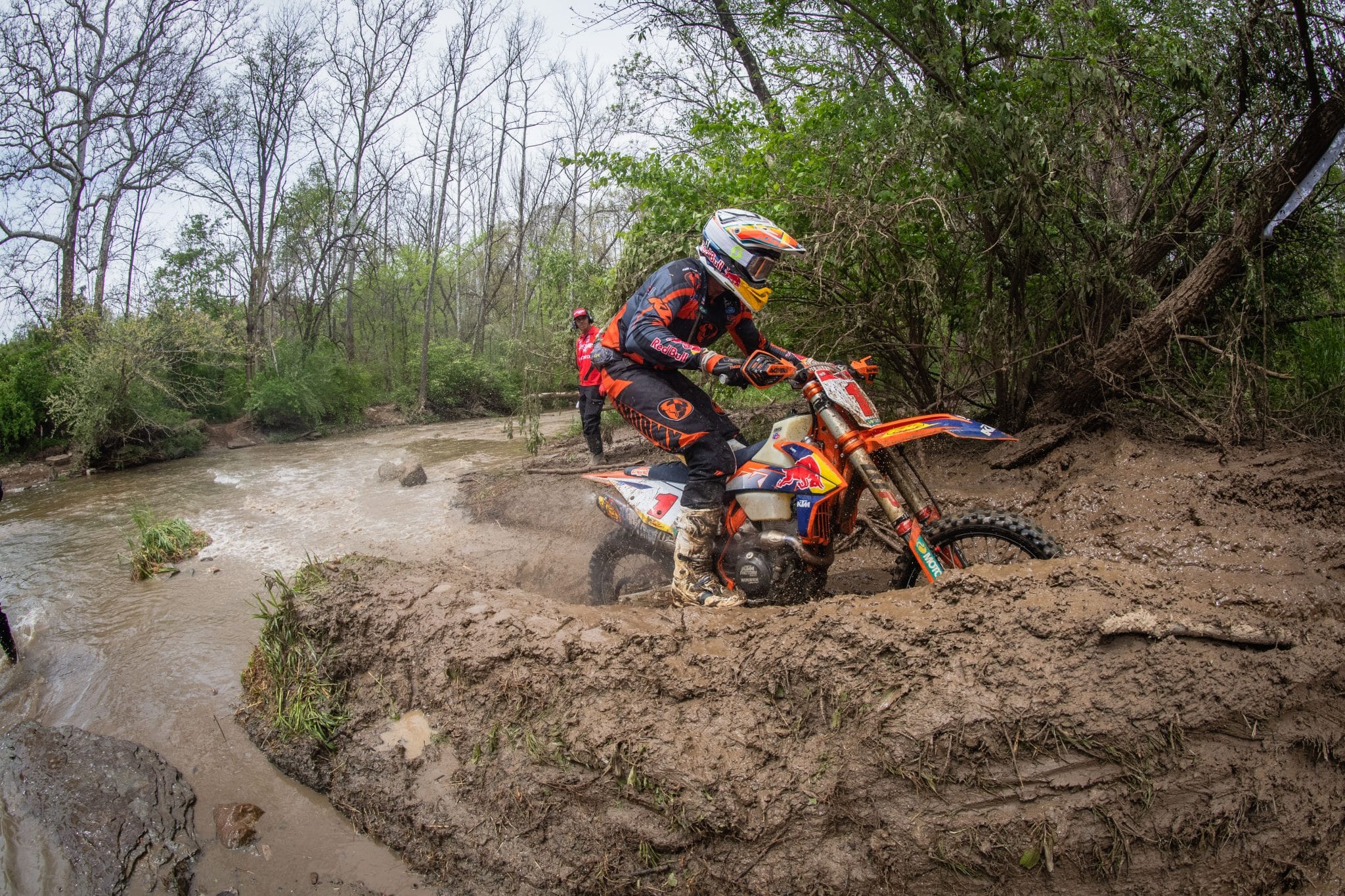 CRAWFORDSVILLE, Ind. (May 9, 2022) – The Grand National Cross Country (GNCC) Series presented by Specialized, an AMA National Championship, concluded round six, Hoosier GNCC, yesterday on Sunday, May 8 at Ironman Raceway. After some slick conditions on Saturday due to rain earlier in the week, Sunday’s weather conditions were near perfect as temperatures remained somewhat cool and the partly cloudy.

As the XC1 Open Pro class took off it was FMF/KTM Factory Racing’s Josh Toth grabbing the $250 All Balls Racing Holeshot Award. However, it would not take long for his teammate, FMF/KTM Factory Racing’s Benjamin Kelley to make his way into the lead position. Kelley would continue to lead the way for the duration of the race, crossing the finish line to earn his sixth-straight win of the season.

Holding onto the last podium position was FMF/KTM Factory Racing’s Josh Toth after earning some extra cash for grabbing the holeshot. Toth would remain second for the majority of the race, but he would be unable to hold off a hard-charging Bollinger on the last lap of the race. Toth continued to push, but he would be unable to make the pass back. He would hold onto third on the day.

Earning fourth on the day was Magna1 Motorsports/Husqvarna’s Jordan Ashburn as he battled back and forth inside the top five throughout the race. Ashburn continued to push, making a pass on the last lap for that fourth place position. Rockstar Energy Husqvarna Factory Racing’s Craig DeLong came back to round out the top five finishers on the day.

Babbitt’s Online/Monster Energy/Kawasaki Team Green’s Josh Strang returned to racing after injuring his arm in Florida. Strang would battle back in ninth for the first couple of laps but would begin to make his way through the pack for the second half of the race. After running up in third for the start of the race AmPro Yamaha’s Layne Michael found himself back to seventh with three laps remaining. Michael would try to continue to push, but he would be unable to make up any ground on the competitors in front of him.

Coastal GASGAS Factory Racing’s Ricky Russell battled back to finish eighth in XC1, with Rev Motorsports/GASGAS Racing’s Grant Baylor coming through ninth. Justin Ashburn would come through in tenth on the opening lap, but he would suffer a mechanical issue.

In the XC2 250 Pro class it was Babbitt’s Online/Monster Energy/Kawasaki Team Green’s Lyndon Snodgrass earning his second win of the season. Snodgrass continues to lead the way in the points standings after six rounds of racing.

RPM/KTM Racing’s Angus Riordan made his second appearance on the XC2 podium this season after coming through to earn second in the class. Riordan also grabbed the STACYC Holeshot Award to start the day. Tely Energy/KTM Racing’s Liam Draper put in his best ride of the season thus far with a third place position on the day in Indiana.

In the FMF XC3 125 Pro-Am class it was Husqvarna/Fly Racing/Coppersmith Racing’s Jake Froman would earn his first win of the season as he led the race for the duration of the three-hours. Motorcycle Enthusiast Inc/Moose Racing/MX Tech’s Hunter Neuwirth came back from a fifth place start to the day to finish second in the class as Carolina XC/Moose Racing/XC Gear’s Zack Hayes rounded out the FMF XC3 class podium.

As the 10 a.m. race got underway it was Trail Jesters KTM’s Korie Steede jumping off the line and grabbing the $100 Trail Jesters WXC Hoelshot Award and the early lead as they headed into the woods. Steede would be met with a battle from Fly Racing/FMF Racing/KTM Racing’s Brandy Richards as she made the pass for the lead on the second lap. Richards would continue to lead for the next couple of laps before Steede would make a last lap pass on Richards for the win. Steede continues to hold onto the points lead after six rounds of racing in 2022. AmPro Yamaha’s Rachael Archer battled her way up to third in WXC and would remain there for the duration of the race.

During the 8 a.m. youth race it was Nicholas DeFeo coming through to earn his sixth consecutive overall win and YXC1 Super Mini Sr. class win. Peyton Feather would come through to earn second overall and in YXC1 while Ryan Amancio earned third overall and YXC2 Super Mini Jr. class win. Van Gosselin rounded out the top three finishers in YXC1, while Brody Amos and Cade Staats rounded out the YXC2 top three.

Ben Kelley: “It was a solid race. I’ve been getting good starts and it’s just clicking right now. I’m riding good and having fun doing it. I’m just having to push at a comfortable pace to stay focused out there and hit my marks. We’ve been training hard and it’s paying off, I’m really happy with the progression. I have a refreshing outlook this year and I’m just trying to enjoy it. As long as I put in a solid race and do the best I can, I’m happy. It’s pretty cool to have more consecutive wins than Kailub Russell, he’s the one helping me get here this year, and hopefully we can keep it going.”

Josh Toth: “I pulled the holeshot and got out front early on but it was super tricky because there were so many lines and a wide track, so I just did the best I could. I knew Ben had some good lines so I let him by and just followed him. We picked up the pace and worked together to try and pull away from the guys. I had just a few mistakes later in the race – I took a hard hit and that knocked the wind out of my sails and then on the very last lap, I got stuck in a rut and Trevor went by. It’s frustrating to lose second but overall, I’m really pumped on the day.”

Bollinger kept the energy flowing at The Hoosier GNCC, taking the number two spot on his FX 350. Coming from sixth at the beginning of the race, he worked his way to fourth by the third lap. On the next lap, he briefly dropped to sixth but regained the fourth place spot within another lap. Nearing the end of the three-hour race, Bollinger turned up the intensity and climbed to third. He was then able to get around the second place rider on the final lap to lock in the spot.