BEN KELLEY IS ON FIRE! WINS THIRD GNCC IN A ROW 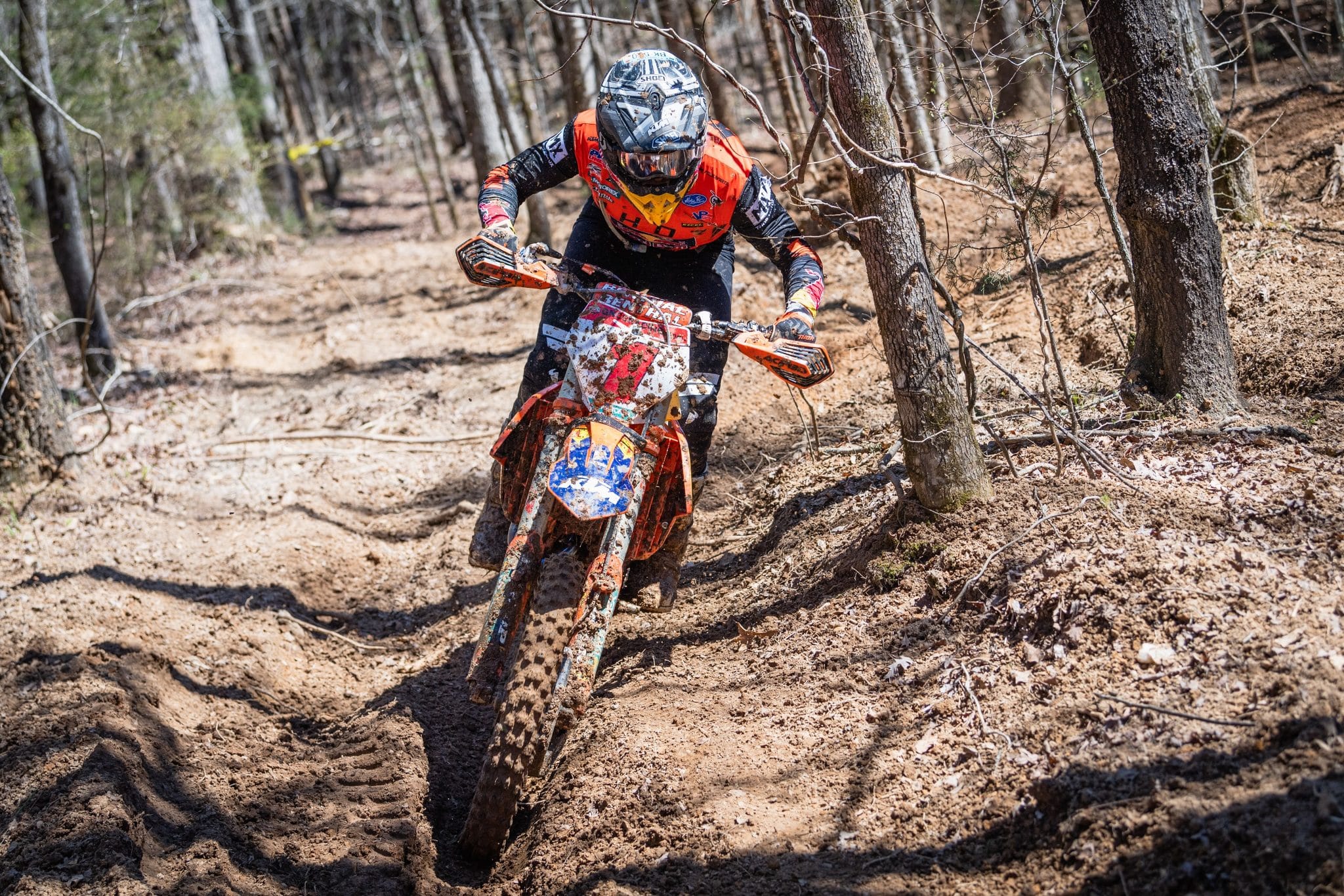 The Grand National Cross Country (GNCC) Series presented by Specialized, an AMA National Championship, concluded round three of the 2022 season in Washington, Georgia on Sunday, March 13, 2022. The Specialized General GNCC saw better conditions during the day on Sunday with sunshine and temperatures in the low fifties.

As the race got underway it was Cobequid Mountain Sports/GASGAS Canada’s Tyler Medaglia grabbed the $250 All Balls Racing XC1 Holeshot Award. However, FMF/KTM Factory Racing’s Josh Toth would move into the lead by the second corner and take off through the woods. Toth would hold the lead for the first two laps of the race but would soon be challenged by his teammate FMF/KTM Factory Racing’s Benjamin Kelley.

Kelley would make the pass for the lead on lap three and continue to place a gap over the rest of the field. As the white flag flew Kelley would hold a 43 second lead and continue to push throughout the course until he was met by the checkered flag at the finish line to earn his third-straight win of the season. Toth would continue to battle behind him and hold onto second overall on the day, his first podium of the year.

Rockstar Energy Husqvarna Factory Racing’s Craig DeLong would battle back from a seventh place start on the opening lap to round out the top three overall. DeLong continued to push throughout the three-hour race, moving up through the pack and coming through only 8 seconds off of second place as the checkered flag flew.

After a good start and running in second place, Magna1 Motorsports/Husqvarna’s Jordan Ashburn suffered throughout the day to find a good pace as he slipped back to fifth for the majority of the race. As the white flag flew, Ashburn had caught and made the pass for fourth. Ashburn continued on towards the finish line but would be unable to make up any more time on the three up front.

Medaglia would fall back to eighth after earning the holeshot, but he would continue to push on. As he made his way back through timing and scoring, Medaglia would find himself sixth for the majority of the race. With just one lap remaining he would make the move into fifth in the XC1 class.

Rockstar Energy Husqvarna Factory Racing’s Trevor Bollinger was running at the front of the pack for the first half of the race as he made his way around in fourth and then third for a lap. Bollinger would continue to push in fourth place, but on the last lap would have a mishap putting him back to sixth in the XC1 class and eighth overall.

Coming through seventh in XC1 was Liqui Moly Beta’s Steven Holcombe. As the group came through on lap one, Holcombe was holding onto the fifth place position but would soon fall back to seventh. Holcombe would hold seventh for the remainder of the race as he came through just 1.7 seconds shy of sixth.

In the XC2 250 Pro class it was Tely Energy Racing/KTM’s Liam Draper jumping out to grab the $250 STACYC XC2 Holeshot Award. However, Babbitt’s Online/Monster Energy/Kawasaki Team Green’s Lyndon Snodgrass would soon make the move into the lead for the first three laps of the afternoon race.

Behind Snodgrass was Coastal GASGAS Factory Racing’s Ryder Lafferty running in second for the first half of the race. Lafferty was just 1.9 seconds off of first during those opening laps, but both Snodgrass and Lafferty would be challenged by AmPro Yamaha’s Mike Witkowski.

As the race wore on Witkowski would find himself making the move from third to first during the fourth lap of the race. Witkowski was not looking back after he got into the lead as he continued to push on coming through just 1.92 seconds ahead of Snodgrass to earn his third-straight win of the season. Snodgrass would finish second in XC2, with Lafferty holding onto third in the class.

In the FMF XC3 125cc Pro-Am class it was Precision Off-Road/FXR Moto/Bullet Proof Designs’ Dominick Morse battling for the class win. As he made his way into the lead with three laps to go, Morse would continue to push and place a gap over the rest of the XC3 competitors. Morse would come through with a two minute lead. Coming through to earn second was Carolina XC/Moose Racing/XC Gear’s Zack Hayes and FXR Moto/Action Extreme Sports Dakoda Devore battling back to finish third in the class.

In the WXC class during the morning race it was Rockstar Energy Husqvarna/Surge Off-Road Coaching Team’s Tayla Jones fighting back on the last lap to make the pass for the win stick. This is Jones first win since the 2020 season at the High Point GNCC in Mt. Morris, Pennsylvania. AmPro Yamaha’s Rachael Archer would hold onto second place after battling with Jones throughout the race. Trail Jesters KTM Racing’s Korie Steede continued to hold third place for the duration of the race.

In the Youth race it was Nicholas “T-Rex” DeFeo earning his third straight youth overall win and YXC1 Super Mini Sr. class win. DeFeo was virtually untouchable as he made his way into the lead on the second lap of the race. KTM’s Peyton Feather would come throughout to earn second overall and in the YXC1 as Van Gosselin came through to round out the top three youth and YXC1 finishers.

The AMSOIL Moto Hero at The General GNCC was awarded to Dan Thompson, 36, of Phoenix City, Alabama. Thompson served in the Army as a Corporal, as he served with the Third Ranger Battalion. He was in the 75th Ranger Regiment based out of Benning, Georgia. He helped fight the war on Terrorism in both Iraq and Afghanistan, and was deployed seven times. Thompson will receive a $250 AMOSIL Shopping Spree, set of Kanati Truck Tires courtesy of GBC, 100% camouflage goggles and a commemorative American Flag from Columbia Sign & Co. along with a $200 Gift Certificate from them.

The GNCC Series will return to racing on March 26-27 with the Dunlop Tiger Run in Union, South Carolina. This event will feature round two of the Specialized Turbo eMTB GNCC National Championship. More information on the event can be found online HERE.

The General Results and Points Standings
Washington, Georgia
Round 3 of 13
Sunday, March 13, 2022