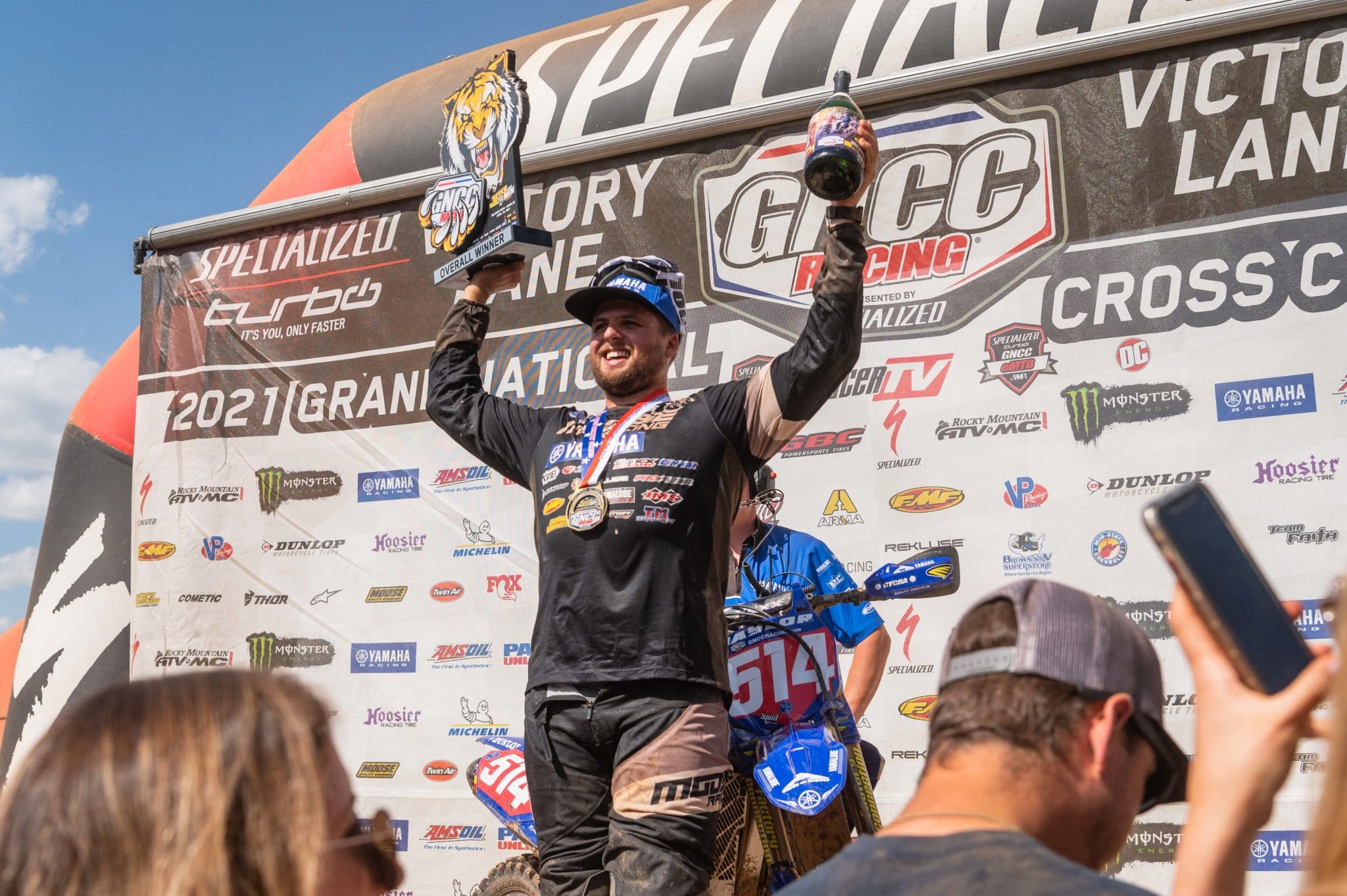 Warm and dusty conditions greeted the final day of racing at the Dunlop Tires Tiger Run, round 5 of the Grand National Cross Country (GNCC) Series presented by Specialized, an AMA National Championship. As the checkered flag flew after three-hours of intense racing it was AmPro Yamaha’s Steward Baylor earning his third consecutive win of the season. 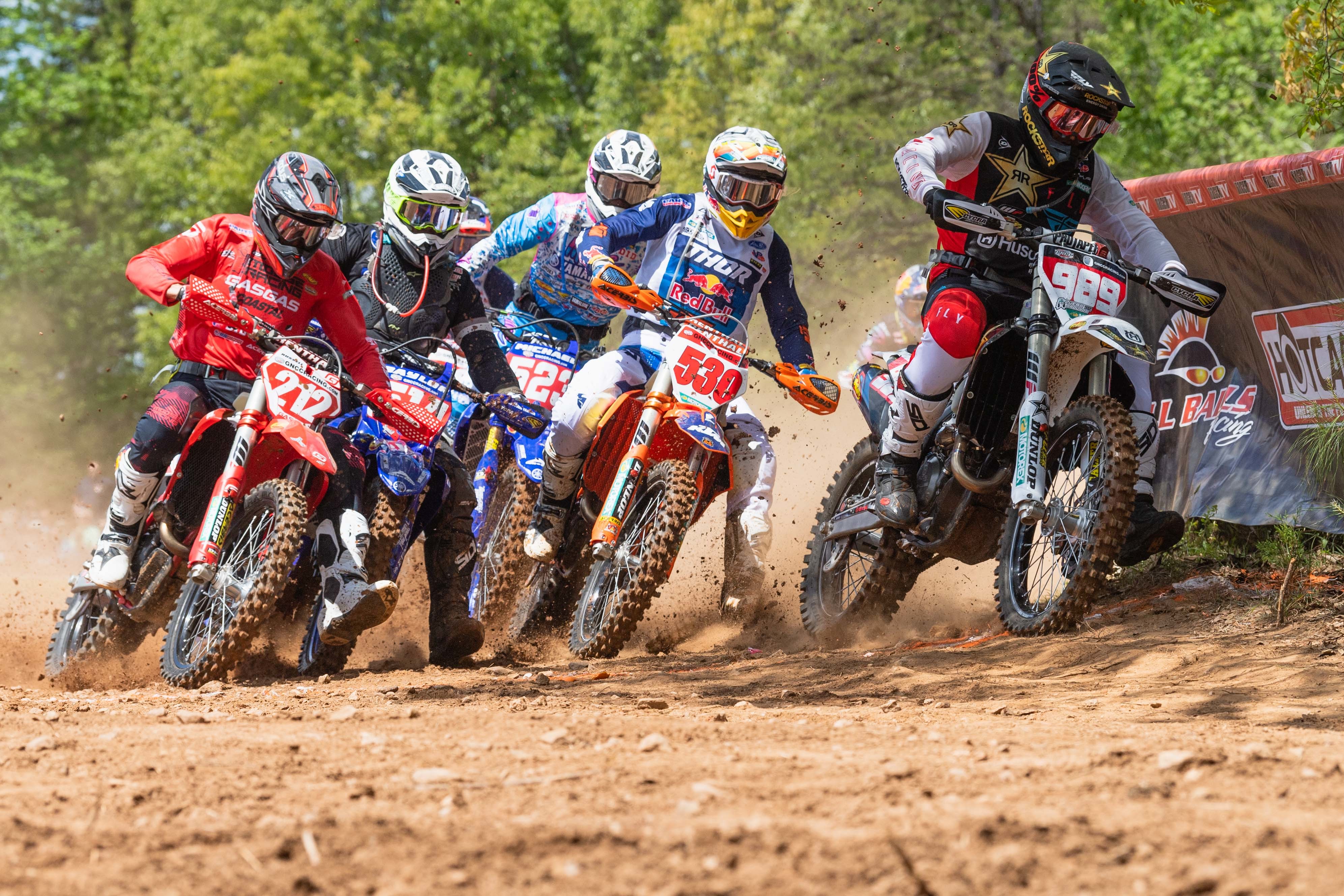 As the green flag waved, it was Rockstar Energy/Factory Husqvarna Racing’s Thad Duvall getting the jump off the line to earn the $250 All Balls Racing XC1 Open Pro holeshot award. However, after a freak incident where a stick had wedged in his bike and ripped the fuel line off Duvall would lose a significant amount of time on the rest of the field.

Up front it would be Coastal GASGAS Factory Racing’s Ricky Russell and AmPro Yamaha’s Steward Baylor coming through timing and scoring with just six seconds separating them. Baylor would make the pass on Russell during the second lap of racing and would begin to place a gap over the rest of the field. After six laps of racing Baylor would cross the finish line to earn his third-straight win, catapulting himself into third place in the points standings.

Russell would continue to battle throughout the day, trying to shorten the gap between himself and Baylor. However, Russell would fall short of the number one spot but would still make great strides as he earned second overall. This is Russell’s first podium since his injury last season. Russell currently sits sixth in the championship standings but will be aiming for more top finishes. 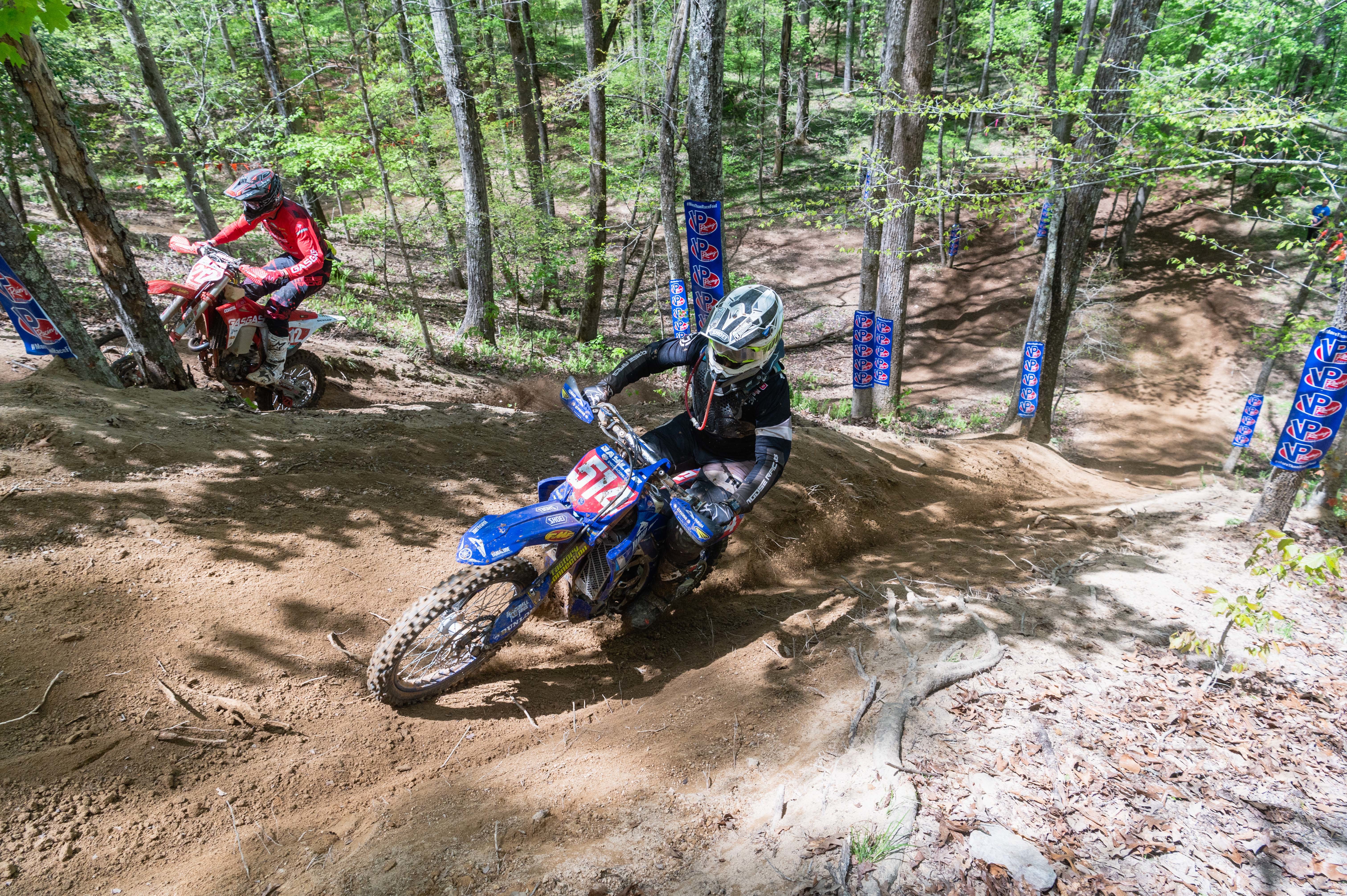 Remaining a consistent force in the hunt for the National Championship is the FMF/KTM Factory Racing-backed rider of Benjamin Kelley. As row one took off and the XC1 Open Pro competitors took off into the woods Kelley would find himself close to the front of the pack. Kelley would continue to push through the dusty conditions, but he would ultimately ride his own race in the third place position.

KLM Milwaukee GASGAS’ Grant Baylor found himself running back in sixth for the first half of the way. Baylor, who earned the round one win at the same property, would find himself making passes as the two-lap board came out. As he came around on the last lap of racing Baylor would cross the finish line fourth overall.

Putting together a solid finish was AmPro Yamaha’s Layne Michael. Michael started out the race in fourth overall, battling with the front of the pack. As the race wore on Michael continued to hold onto fourth, but he would soon battle with Baylor and loose the position with just two laps remaining. Michael would still earn his best finish of the season with a fifth overall and in his class.

Magna1 Motorsports/Husqvarna’s Jordan Ashburn would cross the finish line sixth overall on the day. After running fifth for the majority of the day, Baylor would also make a pass on him to overtake fifth before setting his sights on Michael. Ashburn continues to push throughout the series and sits fourth in the points. 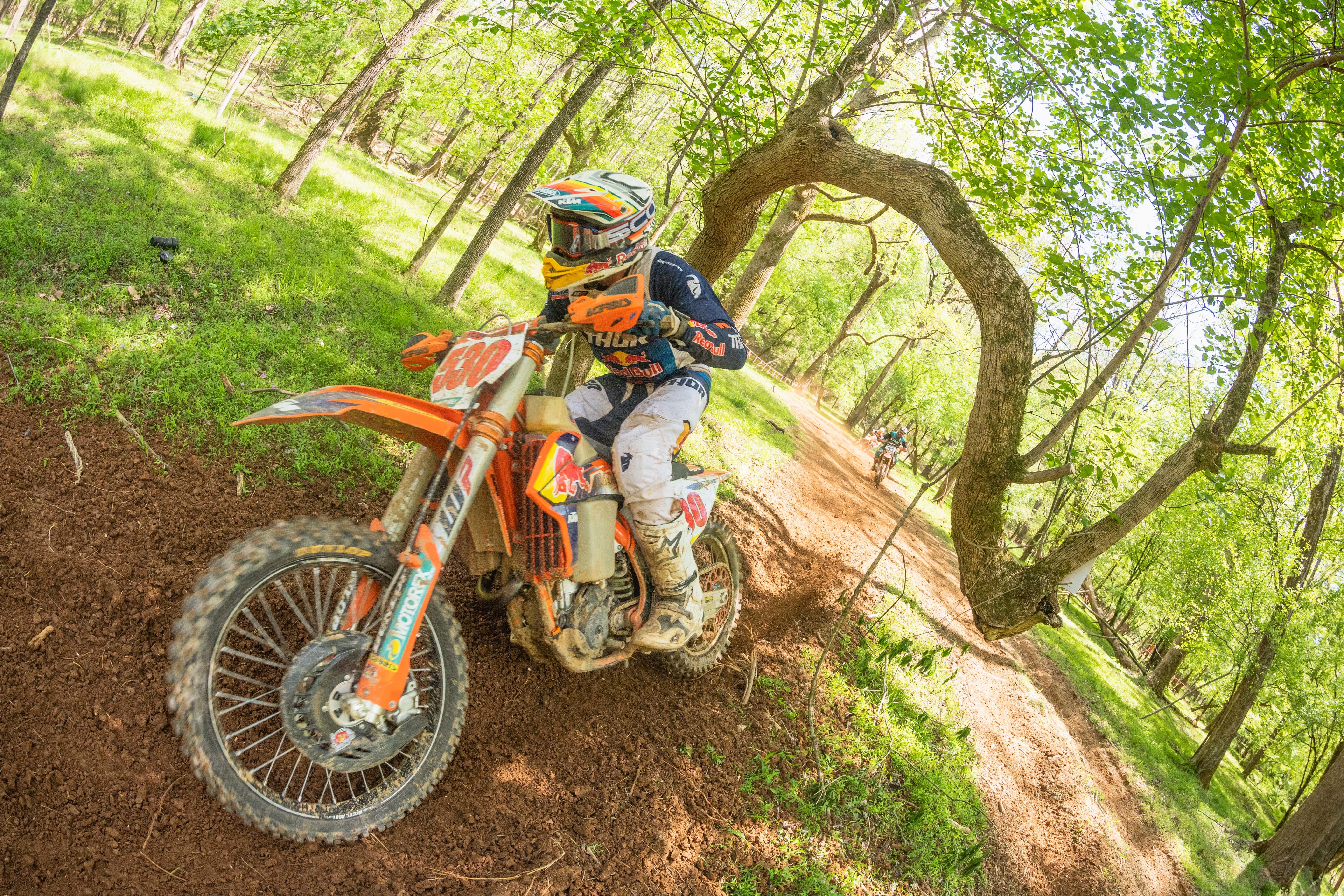 Continuing to work his way back up towards the front after injuries that left him sidelined was the Rockstar Energy/Factory Husqvarna Racing-backed rider Trevor Bollinger. As the season continues on, Bollinger continues to improve his overall finishing positions and standings in the series.

FMF/KTM Factory Racing’s Josh Toth made the move up to eighth on the day after starting off back in 10th place on the opening lap. Toth said he struggled through the dust early on in the race, but that he had loosened up later on in the race.

Earning ninth in the XC1 Open Pro class was Factory Beta/FXR/Nine2/Cyclesmart’s Cory Buttrick, while RedBull/MCS Racing Sherco’s Benjamin Herrera battled back to round out the top 10 in class.

Unfortunately for Babbitt’s Online/Monster Energy/Kawasaki Team Green’s Josh Strang it was an 11th place finish on the day after a crash sent him to his pits for a tire change. As for Duvall, he would complete four laps of racing and finish 12th in the class. 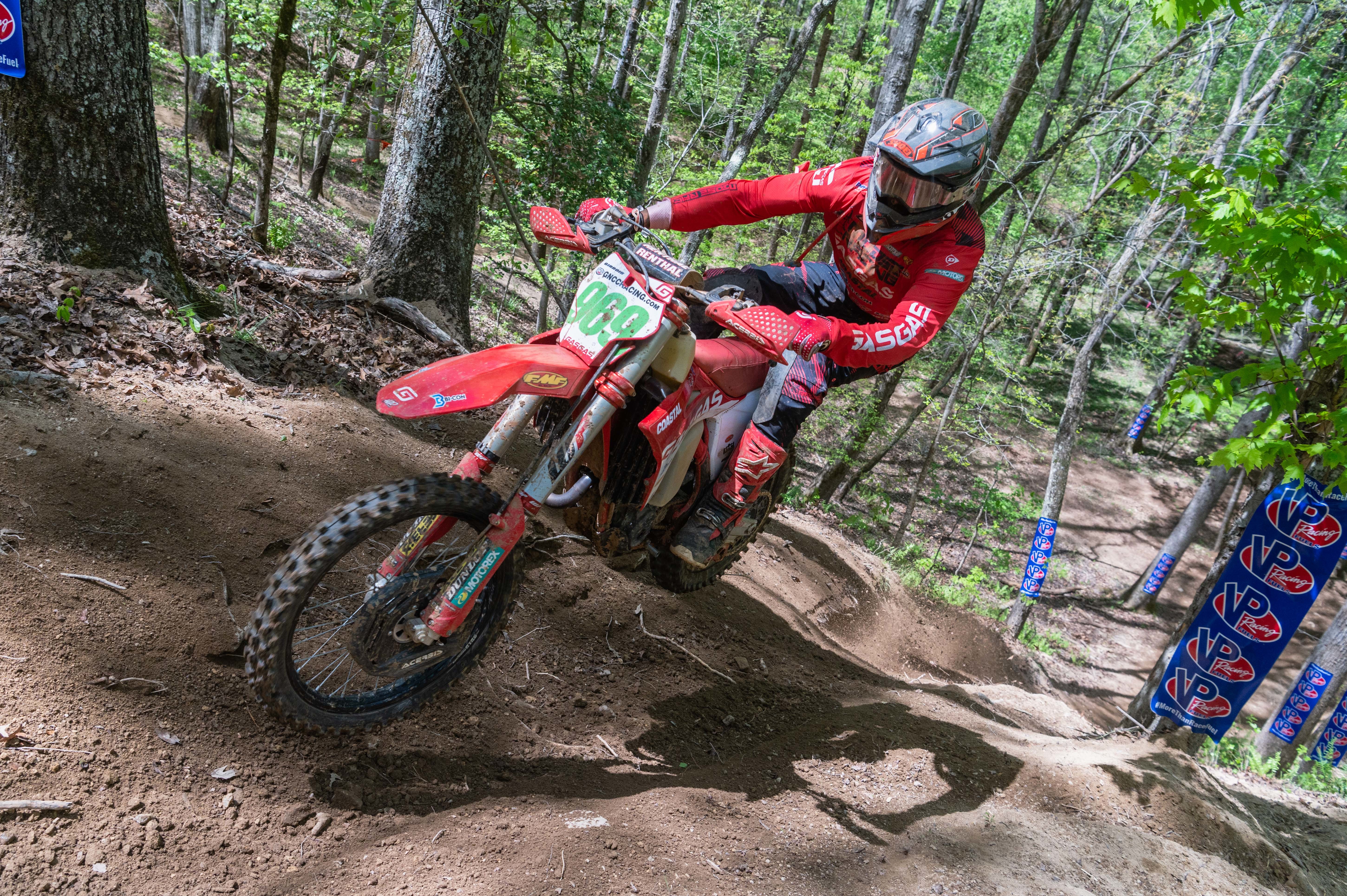 In the XC2 250 Pro class it was Coastal GASGAS Factory Racing’s Jonathan Girroir making his way to the number one spot for the fourth-straight time. Girroir did not have the greatest start to the day as he came through fifth in class on the opening lap of racing. However, Girroir would put his head down and push through making his way to fourth on the second lap and third with three laps to go. While out on lap five Girroir would make the pass for the lead and continue to hold that position for the last two laps of racing in South Carolina.

Rockstar Energy/Factory Husqvarna Racing’s Craig DeLong would start the day out fourth in XC2, eventually making the necessary passes to move up to second place in the class. However, later on in the race stomach issues would prevent him from battling for the win.

Coming through to earn his first XC2 250 Pro class podium finish was Factory Beta USA’s Thorn Devlin. As the race got started Devlin found himself towards the front of the pack, running fifth at the halfway point. With two laps remaining Devlin was running fourth and made the move up to third just miles from the finish line.

Leading the way early on in the class was AmPro Yamaha’s Michael Witkowski. Unfortunately for Witkowski he would come through to finish seventh. 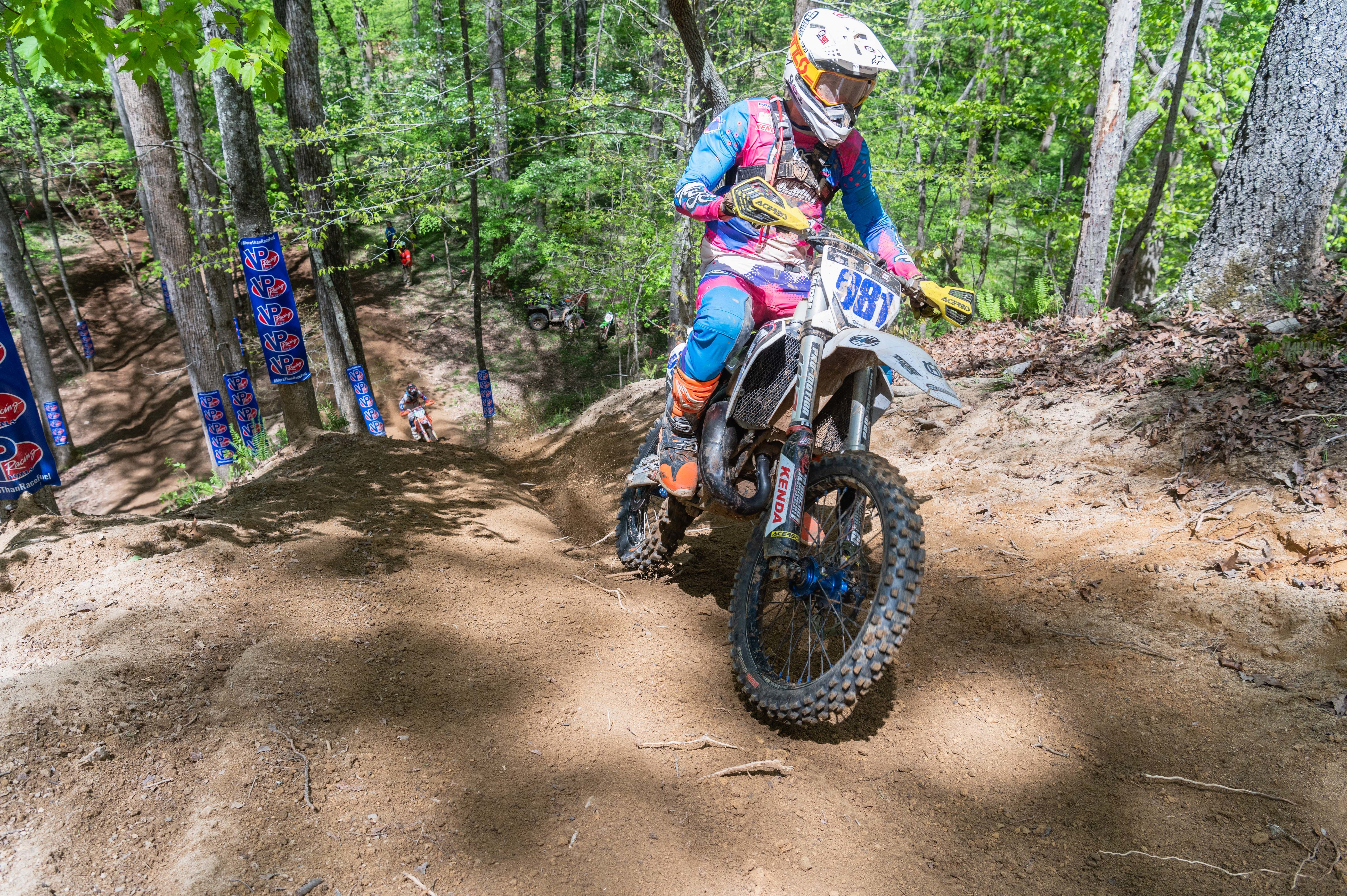 In the FMF XC3 125 Pro-Am class it was once again Magna1 Motorsports/Husqvarna’s Jonathan Johnson earning his fifth-straight win of the season. Johnson continues his winning ways after getting a good jump off the line and moving into the lead position on lap one. Johnson would lead until the checkered flag flew, virtually unchallenged.

After grabbing the $100 Lojak Cycle Sales XC3 holeshot award it was Lojak Yamaha Cycle Sales’ Chase Colville who went on to battle for second in the class. Rounding out the podium was Coastal GASGAS Factory Racing’s Ben Parsons, who came through to finish third at the fifth round of racing.

Bubz Tasha earned the Top Amateur honors at Tiger Run with a win in the 250 A class and 17th overall finish. Coming through in second was Joseph Cunningham with an 18th place finish and second in 250 A. Third top amateur went to Tristan Landrum who finished 21st overall and third in the 250 A class. 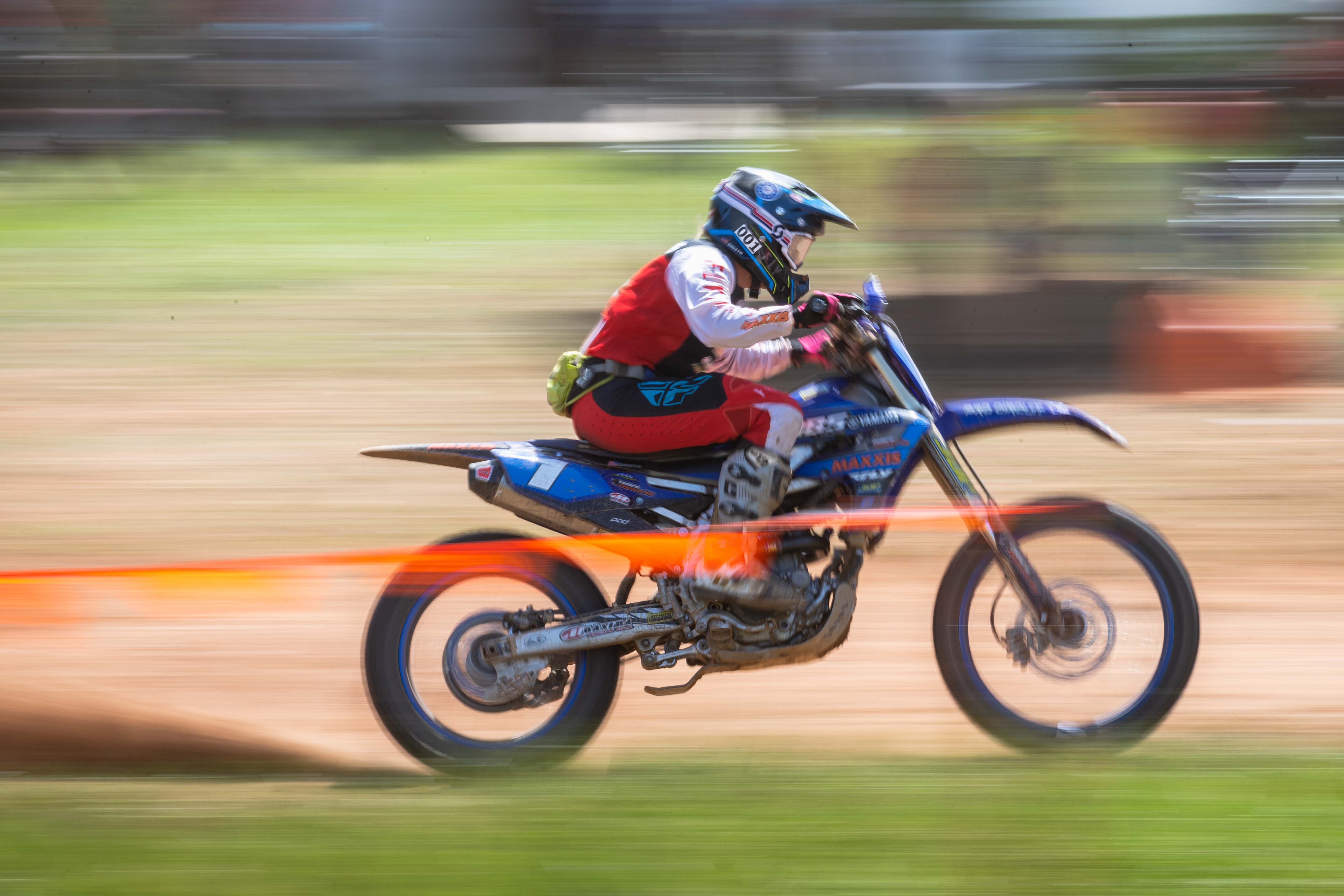 In the WXC class it was Enduro Engineering/MEPMX/Fly Racing/XC Gear’s Mackenzie Tricker jumping out to grab the $100 Trail Jesters WXC holeshot award. However, it would be the BABS Racing Yamaha/Fly/Maxxis/Pro Circuit’s Becca Sheets battling early on with AmPro Yamaha’s Rachael Archer. Sheets would make the pass stick over Archer and continue to push so she could place a gap over the rest of the WXC racers.

Archer would continue to hold onto second, but on the last lap of the race she would experience a crash allowing Kawasaki Team Green’s Korie Steede and Magna1 Motorsports/Husqvarna/Rockstar Energy’s Tayla Jones to make their way around her and into the final two podium finishes. Archer would finish out the day fourth.

In the 8 a.m. youth race it was YXC1 Super Mini Sr. competitor Cole Forbes coming through to take his third overall win of the season. Caleb Lane battled back to finish second with Chase Landers rounding out the top three youth overall and YXC1 class finishers. Landers continues to hold the points lead with Lane just one point behind.

Andrew Segars brought home the YXC2 Super Mini Jr. class win in his home state, while Peyton Feather and Drew Hoffman rounded out the top three in YXC2. Mason Raynor finished 15th overall and first in the 85cc (7-11) class. In the Girls class it was Ellie Winland taking the win. 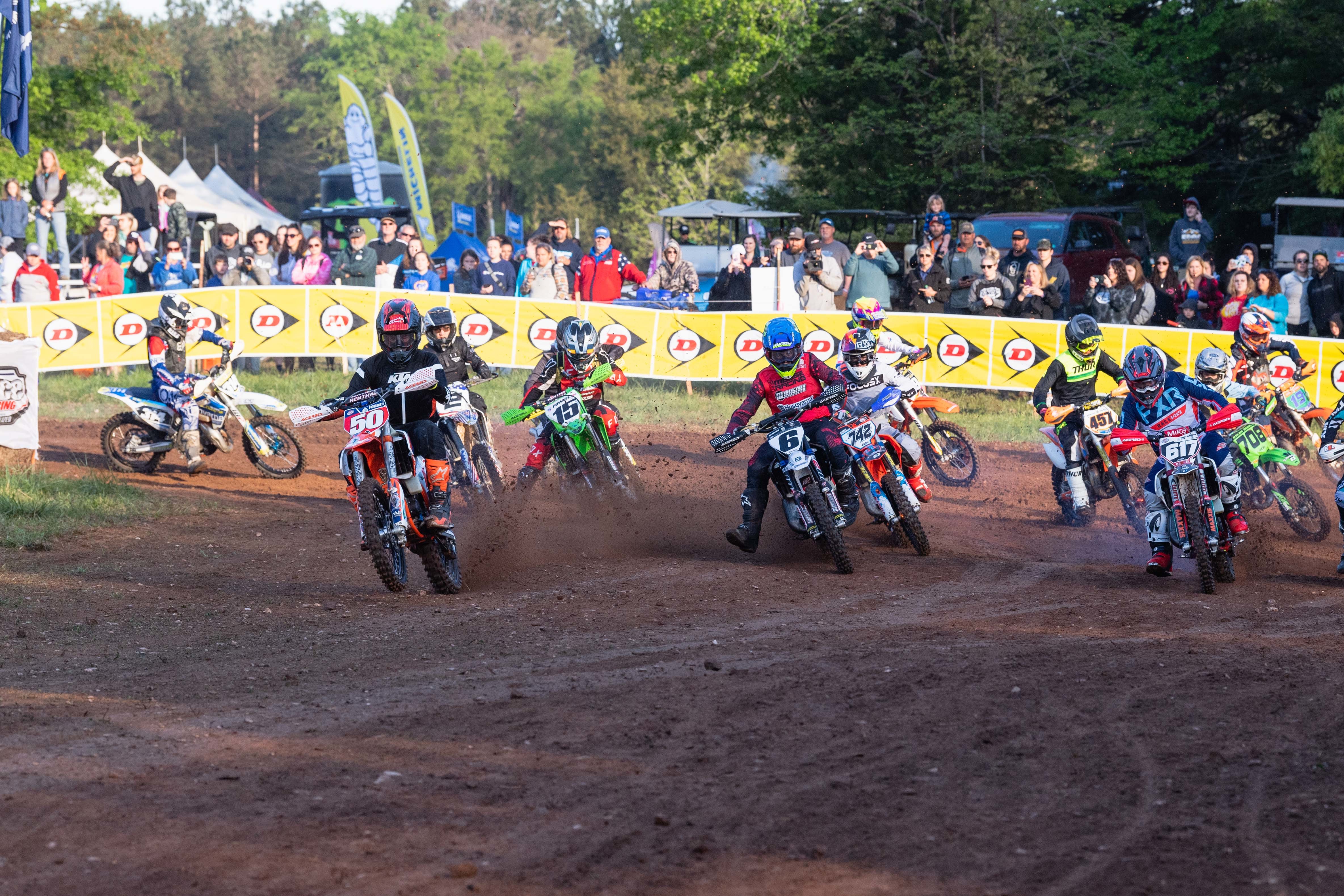 The Tiger Run AMSOIL Moto Hero was awarded to Michael Warren. Hailing from Chepachet, Rhode Island, Warren is 46 years old and is currently racing in the Warrior Bike class. He sits 4th in the points standings, but also is an intricate part of the Pit Crew for his son who races in the afternoon bike race. Warren joined the Military in 1993 and is currently serving in the United States Air Force as a Senior Master Sergeant (E-8). He was deployed to Afghanistan in 2014 and will be deployed to an undisclosed location in January 22. Warren went home with a $250 AMSOIL Shopping Spree, Kanati Truck Tires from GBC, a Commemorative American Flag from Columbia Flag & Sign Co. plus a gift certificate for their online store. He also earned a pair of 100% military appreciation goggles and an ARMA Black Edition Box full of supplements and gear.

Round 6, Hoosier GNCC, of the series will take place on May 1-2, 2021 in Crawfordsville, Indiana at Ironman Raceway.