BAYLOR STEWS THE POT AT THE BURR OAK GNCC 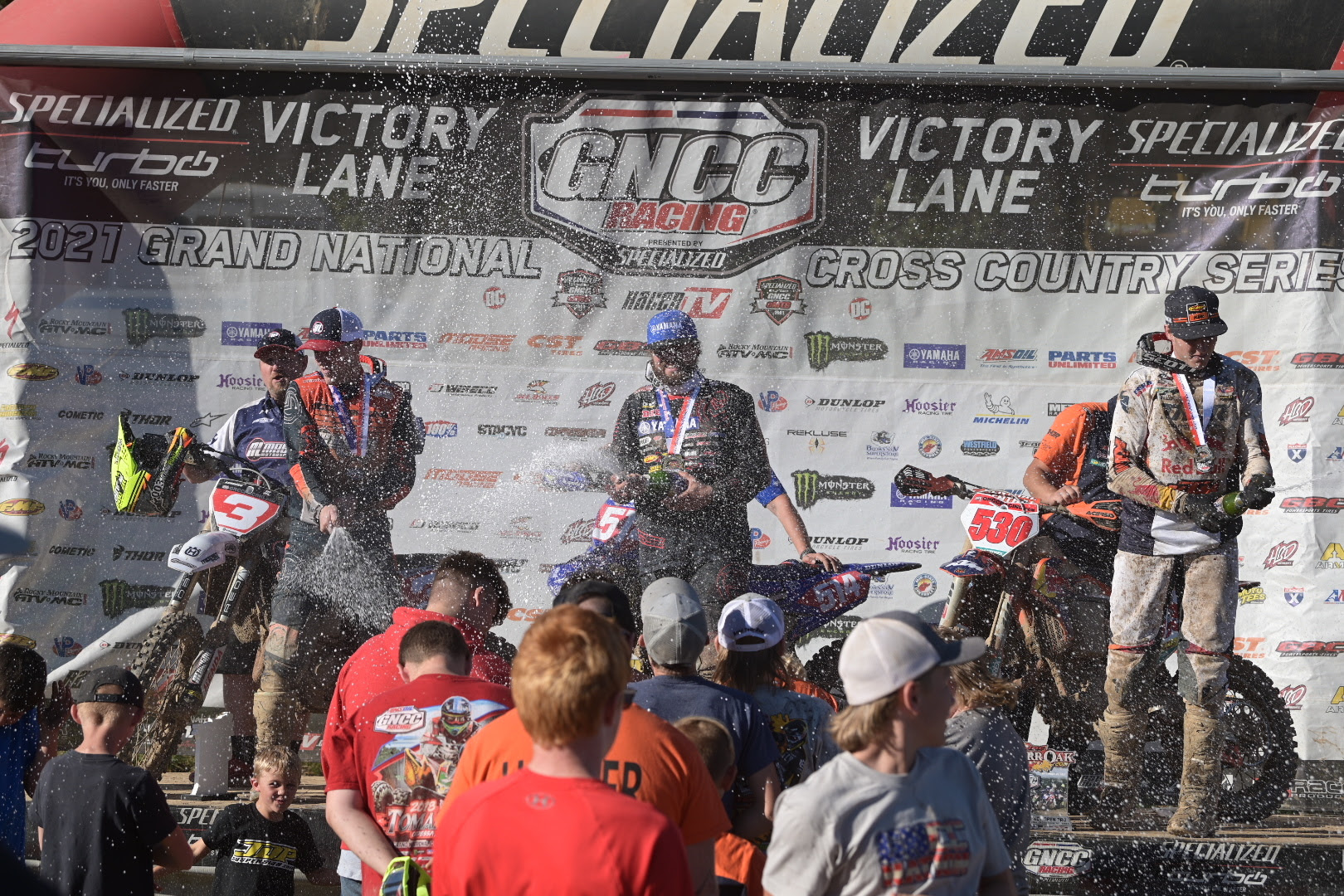 As the XC1 Open Pro class took off the line it was Rockstar Energy Factory Husqvarna Racing’s Trevor Bollinger racing towards the holeshot line, earning himself an extra $250 courtesy of the All Balls Racing XC1 Holeshot Award. However, as the racers headed into the woods on the opening lap it was Magna1 Motorsports/Husqvarna’s Jordan Ashburn making his way to timing and scoring first.

Ashburn would hold the early lead for the first three laps of the race. As the racing heated up it was FMF/KTM Factory Racing’s Ben Kelley closing the gap between himself and Ashburn on lap four and making the pass for the lead. As Kelley moved into the lead AmPro Yamaha’s Steward Baylor had worked his way up to third and was continuing to push towards the front of the pack.

As the trio up front made their way through the woods on the final lap of the race it was Baylor making the necessary passes on Ashburn and Kelley to move himself into the lead position. As Baylor made his way to the finish he would cross the finish line 16 seconds ahead of Kelley, who came through to finish second, with Ashburn holding onto third overall on the day. Baylor now holds the points lead, just one point ahead of Kelley.

Coastal GASGAS Factory Racing’s Ricky Russell made his way into the fourth place position after running back in fifth for the majority of the race. Russell, who missed the last race due to illness, looked to be in great shape as he continued to push for the full three hours.

After starting in the back of the XC1 pack it was Rockstar Energy Factory Husqvarna Racing’s Thad Duvall making his way into fifth as the checkered flag flew. Duvall continues to battle this season and is aiming to get back on the podium before the season concludes in two rounds.

FMF/KTM Factory Racing’s Josh Toth would cross the line sixth on the day. Toth found himself battling back from eighth place on the second lap, but he would put his head down to continue as he would make some great passes to battle for a better finishing position. After earning the holeshot Bollinger would continue to battle at the front in third, however, he would eventually find himself battling for that eighth place position on the last lap of the race.

Coming through to earn eighth overall was Babbitt’s Online/Monster Energy/Kawasaki Team Green’s Josh Strang. Strang would have his work cut out for him as he continued to battle all day long. Strang would continue to push and try to make the necessary passes to earn some valuable points. AmPro Yamaha’s Layne Michael would come to the starting line not feeling 100% but would try to push. Michael would complete three laps of the race before pulling out of the race.

In the XC2 250 Pro class it was Beta USA’s Thorn Devlin would come through grab the $100 Hot Cams XC2 Holeshot Award. As the XC2 class made their way to the finish line on lap one it was Coastal GASGAS Factory Racing’s Jonathan Girroir with the lead. Girroir would continue battling throughout the entire race to earn his eighth win of the season.

Rockstar Energy Factory Husqvarna Racing’s Craig DeLong and AmPro Yamaha’s Mike Witkowski would push Girroir throughout the race, with Witkowski even taking the lead at one point. Girroir would put his head down and push to get back around Witkowski to regain the lead position until the checkered flag flew. DeLong would also make his way into second as the white flag came out, indicating one more lap. DeLong would come through with Witkowski coming through to take third in the XC2 class.

Coming through to take the FMF XC3 125 Pro-Am class win, and 2021 National Championship was Magna1 Motorsports/Husqvarna’s Jonathan Johnson. As Noah Clark earned the $100 Lojak Cycle Sales holeshot award, Johnson would move into the lead position. Johnson would continue to lead throughout the duration of the race, coming through with over a three minute lead. Earning himself the FMF XC3 GNCC National Championship.

AOMC/FXR Gear/JDP Suspension’s Jason Lipscomb would have a consistent race as he continued to run second throughout the three-hour race. Earning third in the FMF XC3 class was Enduro Engineering/Husqvarna/FXR Gear’s Jake Froman. Froman would battle back-and-forth with Lojak Cycle Sales’ Chase Colville for the last podium position and would make the pass stick over him and Yamaha’s Eli Childers.

In the WXC class it was Enduro Engineering/MEPMX/Fly Racing/XC Gear’s Mackenzie Tricker earning herself the $100 Trail Jesters WXC Holeshot Award. But it would not take too long for BABS Racing Yamaha/Fly Racing/Maxxis/Pro Circuit’s Becca Sheets to make the pass stick for the lead. Once in the lead Sheets would start to pull away from the rest of the women behind her.