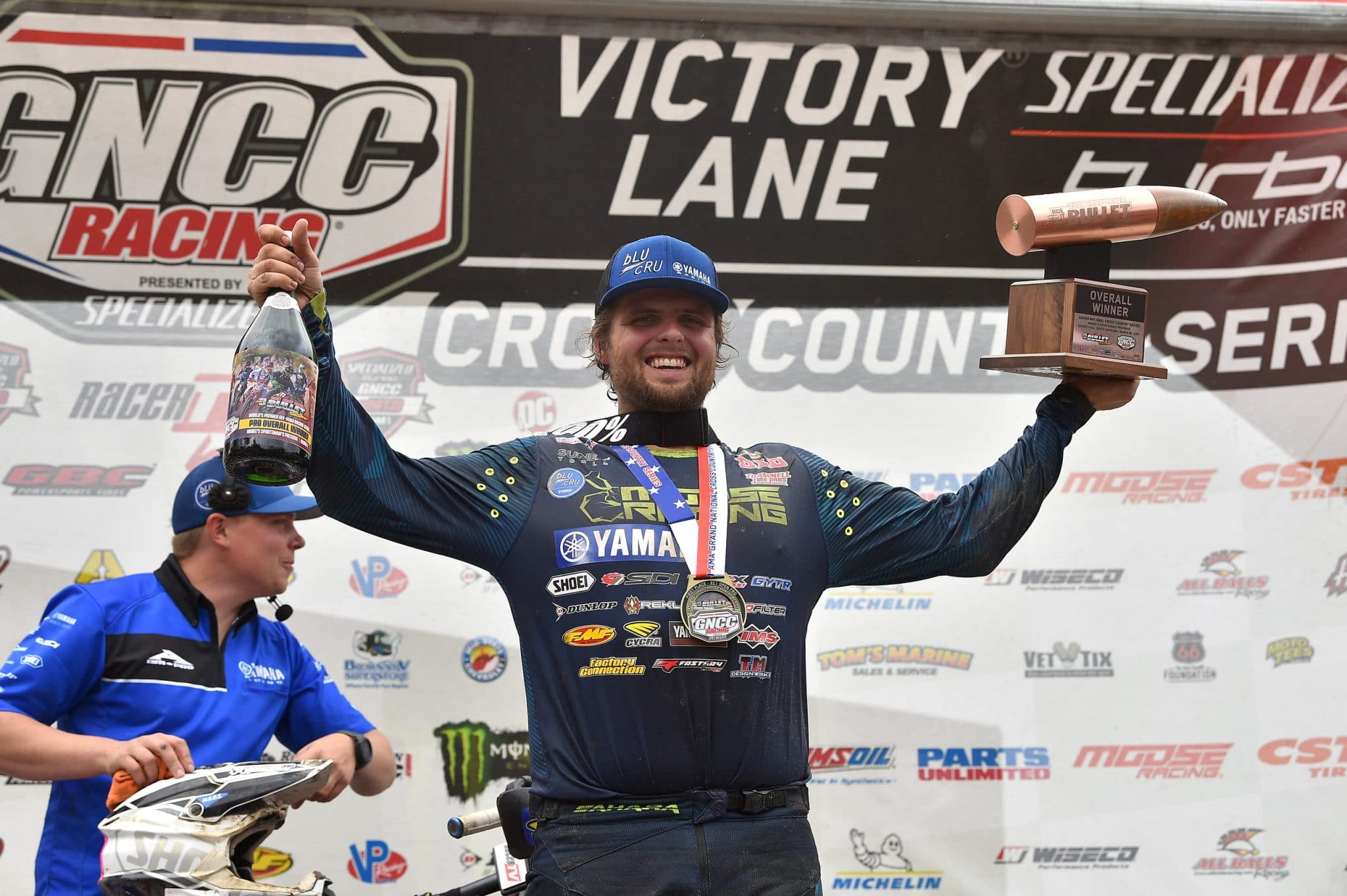 Battling back and forth throughout the three hours of racing were AmPro Yamaha’s Steward Baylor and Babbitt’s Online/Monster Energy/Kawasaki Team Green’s Josh Strang. The pair would begin to pull away from the rest of the pack, while swapping the lead position multiple times. Strang would lead the way as the white flag came out, but as they headed towards the finish line it was Baylor coming through to earn his second-straight win of the year. Strang would finish second just three seconds behind Baylor.

Magna1 Motorsports/Husqvarna’s Jordan Ashburn made his way onto the podium with a third in the XC1 Open Pro class. Ashburn would get off to a good start coming through in the fourth place position and would make the pass for a podium finish on the fourth lap of racing. Ashburn continued to push, but he would be unable to catch the lead pair.

Making his way towards the front after a seventh place start to the day was FMF/KTM Factory Racing’s Benjamin Kelley. Kelley would hold onto third for a couple of laps, but would ultimately lose the position to Ashburn, and remain fourth until the checkered flag was waving.

KLM Milwaukee GASGAS’ Grant Baylor rounded out the top five in XC1. Baylor worked his way through the pack after coming through timing and scoring on lap one in eighth place. FMF/KTM Factory Racing’s Josh Toth had a great start to the day as he found himself running third on the opening lap. However, Toth would fall back to sixth at the end of three-hours of racing.

Earning seventh in XC1 was the Rockstar Energy Factory Husqvarna Racing-backed rider Trevor Bollinger. Bollinger would continue to push himself as he started out the race back in ninth place. As the laps wore on, Bollinger found himself making the necessary passes to continue his way to the front of the pack. Bollinger would run out of time to make any more passes, but he has been steadily improving since returning to racing.

RedBull/MCS Sherco Racing’s Benjamin Herrera worked his way into the eighth place spot as the white flag flew. Herrera worked his way there from a tenth place start in South Carolina. Coastal GASGAS Factory Racing’s Ricky Russell had his work cut out for him as he came through the finish line 11th on lap one. Russell would only be able to make his way to ninth on the day. While Factory Beta’s Cory Buttrick rounded out the top 10 in XC1 Open Pro.

In the XC2 250 Pro class it was Coastal GASGAS Factory Racing’s Jonathan Girroir taking the class win while also earning third overall in the race. Girroir remains the points leader in the class after four rounds of racing.

Babbitt’s Online/Monster Energy/Kawasaki Team Green’s Lyndon Snodgrass came through to earn second in the XC2 class and fourth overall on the day. Snodgrass sat second for majority of the race, but he would give Girroir a challenge at the halfway point of racing. Snograss would be unable to hold onto the lead and come through the finish line 17 seconds off the leader.

Rockstar Energy Factory Husqvarna Racing’s Craig DeLong rounded out the top three in XC2 after he worked his way through the field of racers from a sixth place start to the day. DeLong would hold a steady pace throughout the day, but he was unable to catch the leaders in time to put up a fight for the win.

Earning her second WXC win of the year was BABS Racing Yamaha/Maxxis/Pro Circuit’s Becca Sheets. Sheets would have a battle on her hands throughout the entire race as AmPro Yamaha’s Rachael Archer was gunning for her third win of the season.

Sheets would hold onto the lead as the checkered flag flew, with Archer finishing second. The pair are currently tied for the points lead after four rounds of racing. Coming through to earn third in the WXC class was Magna1 Motorsports/Husqvarna/Rockstar Energy/Moose Racing’s Tayla Jones.

In the youth race it was Cole Forbes coming through to take the overall and YXC1 Super Mini Sr. class win in South Carolina. Nicholas Defeo and Thor Powell rounded out the top three overall and in the YXC1 class. While Peyton Feather earned the YXC2 Super Mini Jr. class win with Ryan Amancio and Robert Weiss bringing home second and third in the YXC2 class.

The next round of GNCC Racing will take place in Union, South Carolina on April 17-18 for the Tiger Run. This event will be a Specialized Turbo eMTB GNCC National Championship round.