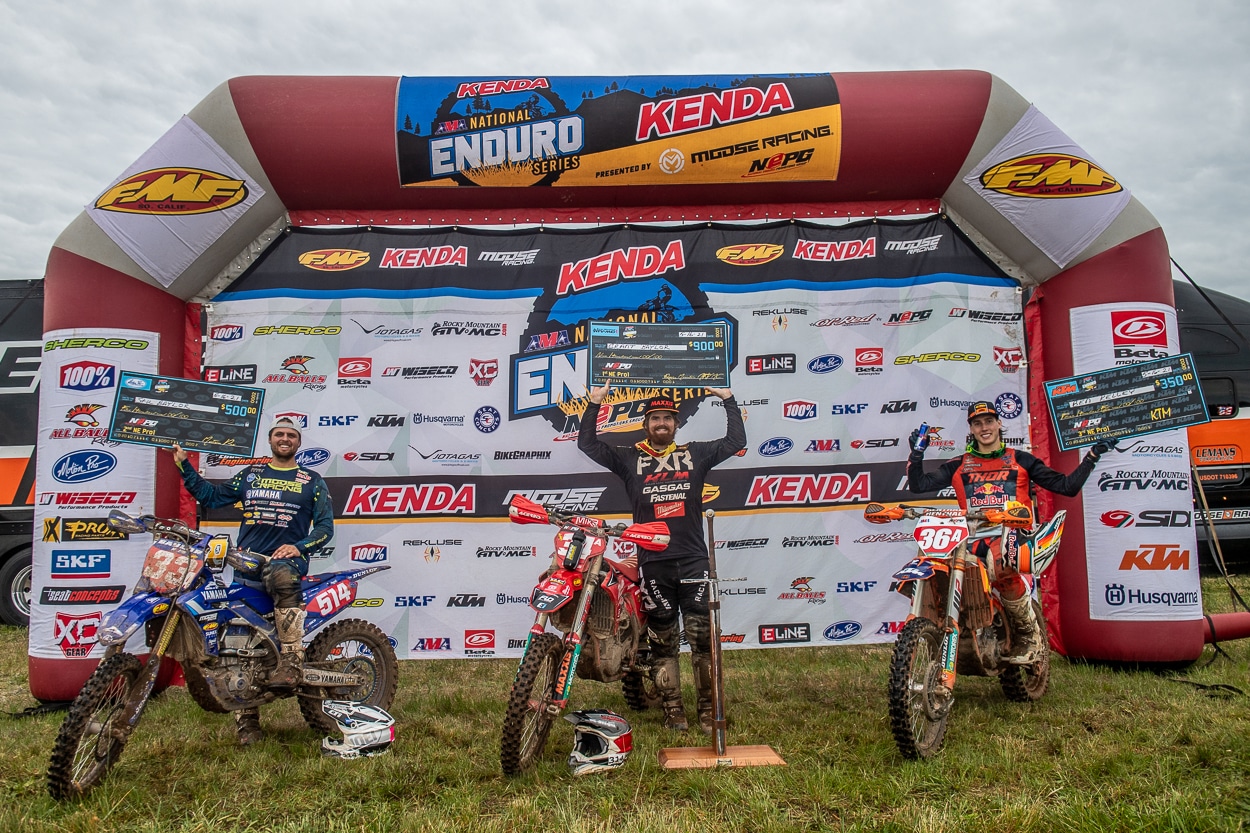 KLM/Milwaukee/GasGas’ Grant Baylor got revenge on his brother, AmPro Yamaha rider Steward Baylor, by holding off his older sibling in the sixth and final test to win this weekend’s Dragon’s Back National Enduro in Arrington, Virginia.

The Baylor brothers, along with FMF/KTM’s Ben Kelley, finished in a tight group at the front of the event, as a record entry enjoyed moderate temperatures and just enough rain to keep the dust down at the third round of the Kenda AMA National Enduro Series.

If you haven’t been following the series, Steward won the opening round of the series in South Carolina ahead of Grant but had to come back from a 17-second deficit heading into the final test of round two of the series in Louisiana to nab his second win of the year. The Dragon’s Back Enduro came down to pretty much the same scenario as Louisiana, with Grant leading Steward by 13 seconds heading into the final test. Steward has a knack for turning up the heat at the end of a race and all eyes were on the clock to see who would come out on top. When the scores were tallied at the end of the day, Grant managed to hold off Steward, and even gained some time on him, to claim his first win of the year by just over 16 seconds.

Steward said “I went into that last test and I said we’ve got to crush this. I actually crashed in the test before and still won, so I knew I had the speed. We got in that last test and it was the slickest section of the day by far. I think I was just over-riding it when I needed to be more patient. By the time I figured that out, it was just too late.”

After getting off to a disappointing start to the series, Ben Kelley has now had two solid rides, finishing fourth in Louisiana and landing on the podium in Virginia with a third. FMF/KTM’s Josh Toth came into Virginia hoping to improve on his third-place finish in Louisiana, and came on strong in the final few tests, but couldn’t break into the top three. “It was a pretty uneventful day,” said Toth. “It was pretty slick from the rain so I just tried to stay of ground in the first few tests. Near the end I started picking it up but it was a little too late.”

Craig DeLong rounded out the top five. The Rockstar Energy Husqvarna rider got off to a slow start in the first test but was able to make some adjustments on the trail and pick up his times. DeLong ran in fourth at one point, but settled for fifth in the end. His teammate Trevor Bollinger is still racing himself back into form from injury, but managed to turn the third-fastest time in test two. Bollinger ended the day in sixth.

Trail Jesters Racing’s KTM rider Jesse Ansley picked up his third NE Pro2 win of the year with a seventh overall. Coastal Racing GasGas’ Ricky Russell is still getting his enduro legs under him but showed improvement with an eighth overall. Meanwhile, Beta USA’s Thorn Devlin rode a two-stroke to ninth overall and Husqvarna/Max Motorsports/FXR Racing’s Evan Smith rounded out the top 10.