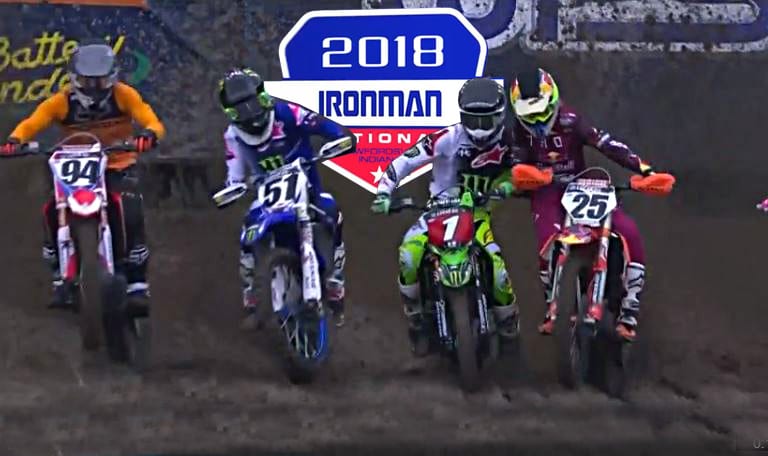 The final round of the 2018 Lucas Oil Pro Motocross Championship took place in Indiana this week under stormy skies. An extreme rainstorm in the morning left the track a muddy mess and caused an abbreviated qualifying schedule. Despite the conditions, Eli Tomac came through with a fourth overall and enough points to claim his second consecutive 450 title. The fastest man of the day was Justin Barcia, who used his mud skills to claim a double moto win–his first of the year. In the 250 class, Aaron Plessinger had already clinched the championship, but the muddy conditions played right into his hands, as he also swept both motos.

Starting from the inside gate, Chad Reed nearly pulled a holeshot but got edged out by privateer rider Dylan Merriam and then lost spots to Justin Barcia and Phil Nicoletti. Meanwhile several riders, including Cooper Webb, went down in one of the first turns. Barcia soon took the lead from Merriam as the two riders went through some very muddy rollers, and then a few minutes later, Nicoletti moved into the lead after Barcia got stuck.

Of course the big story of the moto was Eli Tomac. After 10 minutes of racing, the points leader was up to third place and had caught up to Barcia. His championship rival, Marvin Musquin, was struggling though. The Frenchman was back in sixth place and trailing the next rider, Ken Roczen, by 22 seconds.

Barcia was able to retake the lead in the second half of the moto by using the rollers — the same part of the track he used to pass Merriam — to get around Nicoletti. A slowed-down Nicoletti, who had led three laps in total, also dropped a spot to Tomac but ended up getting it back when Tomac went down with 11 minutes to go. Tomac was then able to chase Nicoletti back down and re-pass him for second place, but by this point, the mistakes had allowed Barcia to check out. Running more than 20 seconds ahead of Tomac, Barcia was able to navigate through the mud for his first moto win of the season.

But for Tomac, second place wasn’t quite enough to wrap up the title. Musquin passed Reed for fifth place, but he still needed to pick up at least one more position to stay in contention. In the race’s final laps, Musquin managed to erase a 16-second deficit behind Nicoletti and made another pass for fourth place.

As a result, Tomac now holds a 24-point lead with one moto left in the season, with a maximum of 25 points available in that moto. In order for Musquin to steal the title, he would need to win the moto and Tomac would need to finish outside the top 20.

There’s also some drama left for the No. 3 spot in the championship standings between Barcia and Roczen. The two riders have been in a back-and-forth battle all season long, and Roczen — who was able to work his way up a third-place finish in this moto — holds a four-point edge over Barcia heading into Moto 2.

Chad Reed will also be a point of intrigue in the second moto. In his first Lucas Oil Pro Motocross race in three years, he finished fifth in Moto 1 thanks to a late-race pass on Nicoletti.

The treacherous racing conditions produced some surprising results, including Jason Anderson and Blake Baggett finishing 16th and 17th, respectively, in the moto. Anderson lost nine spots after a late fall, and Baggett fell a lap down early in the race after a crash that left him struggling to get the bike out of the mud. After the race, Anderson was docked an additional three spots for cutting a section of the track.

As mentioned earlier, two things needed to happen in Moto 2 for Marvin Musquin to steal the championship. First, he would need to win the moto. Musquin got a decent start, putting himself into fourth place early in the race, but had to contend with some heavy hitters in front of him. Justin Barcia had quickly moved into the lead by passing Chad Reed, who had ripped his second holeshot of the day, and Ken Roczen was soon up there too.

The other thing Musquin needed was for Tomac to finish outside the top 20. A poor start actually put him outisde that range initially, but Tomac is always quite adept at making passes. Three laps into the moto, he was already into the top 10. Meanwhile Musquin was trailing the lead duo of Barcia and Roczen by more than 10 seconds.

With neither scenario looking likely to happen, attention shifted to a battle for the lead between Barcia and Roczen. Roczen kept it close throughout much of the race but was never quite able to reel Barcia in. Meanwhile Musquin encountered heavy resistance from Cooper Webb — who is rumored to be Musquin’s new teammate at Red Bull KTM for 2019 — in a battle for third place. Musquin had to work hard to get the position, then lost it when he collided with a downed lapper, then had to pass Webb a second time.

Barcia nearly made things interesting when, with two laps to go, he went down in back-to-back incidents, but thanks to the safety net of a 15-second lead, he recovered from both falls before Roczen could catch him.

Barcia, Roczen, Musquin and Webb finished as the top four, and Tomac ended up in ninth place. That result gave Barcia the 1-1 sweep of the Ironman National and his first overall win of the year, as he finished ahead of Roczen (3-2) and Musquin (4-3) on the overall podium.

Tomac ends the season 16 points ahead of Musquin — nearly identical to last year’s 17-point margin of victory. He’s the first rider to successfully defend a 450MX title since Ricky Carmichael in 2006.

Even with the sweep, Barcia fell just shy of third overall in the final championship standings. Roczen did just enough at Ironman to edge him out by one single point.

Although many of the factory riders had poor gate picks and the track was still very sloppy, things worked out all right for Justin Cooper and Chase Sexton. Coming from the inside gates, Cooper took the holeshot and Sexton settled into second place. By the end of the first full lap, Aaron Plessinger was in third, and the top three were more than 10 seconds ahead of the rest of the field.

The top three started to tighten up around the midpoint of the race, with Cooper, Sexton and Plessinger all separated by less than four seconds.  Sexton and Plessinger both got in front of Cooper, but then Sexton momentarily got stuck in the mud. That allowed Plessinger to close in and apply pressure before ultimately taking the lead with under 10 minutes to go. Though Plessinger’s bike was smoking a bit as he made the pass, he eventually pulled away from Sexton and built a lead of more than 25 seconds. Even with a fall on the final lap, Plessinger’s lead was safe and he scored his 10th moto win of the season.

Sexton was in danger of losing second place to a hard-charging Dylan Ferrandis late in the race, but Ferrandis’s bike stalled with two laps to go. The GEICO Honda rider was then able to hold on for second place despite going down on the last lap. It’s the second moto in a row that Sexton has finished as the runner-up.

Cooper finished third, last week’s winner RJ Hampshire took fourth, and Shane McElrath rounded out the top five. Michael Mosiman, who didn’t initially qualify but got into the field as an alternate, finished in sixth place.

As for Ferrandis, he ended up in ninth despite a DNF thanks to the number of lapped riders on the track.

It didn’t take long for Aaron Plessinger to get out front this time. Although RJ Hampshire got the holeshot, Plessinger got around him on the opening lap to move into the lead. Behind Plessinger was the GEICO Honda duo of Hampshire and Chase Sexton and then two of Plessinger’s Star Yamaha teammates, Colt Nichols and Dylan Ferrandis.

The running order of the top five remained unchanged throughout the first half of the moto, but then a mistake from Hampshire dropped him back to fourth and allowed Sexton and Nichols to each pick up a position.

Sexton was the next one to make a mistake. He crashed on Lap 10 — one of several crashes he had in the moto — and ended up sliding three spots back to fifth place. With Plessinger way out front and Nichols running in second, Ferrandis went after Hampshire for third place in hopes of making it an all-Yamaha podium, but a fall of his own late in the race derailed that hope.

Plessinger went on to take the checkered flag without incident, giving him his sixth overall win of the season. Five of those six overall victories have come in the form of 1-1 sweeps. He’ll also end the season having won 11 of the 24 motos and with exactly 500 points.

Nichols, Hampshire, Ferrandis and Sexton made up the rest of the top five in Moto 2, but after the race, Sexton was penalized one position for cutting a section of the track. (That moves Forkner up to fifth and Sexton down to sixth in the official results.)

Despite that penalty, GEICO Honda teammates Hampshire and Sexton both made it onto the overall podium for the second week in a row. Hampshire (4-3) landed second overall and Sexton (2-6) finished third overall. The duo went 1-2 last weekend at Budds Creek and has finished out the season on a high note. Hampshire’s recent charge allso elevated him to fourth in the final 250MX championship standings.