BAJA 1000 IRONMAN WINNER JEFF BENRUD; WHAT IT TAKES TO WIN 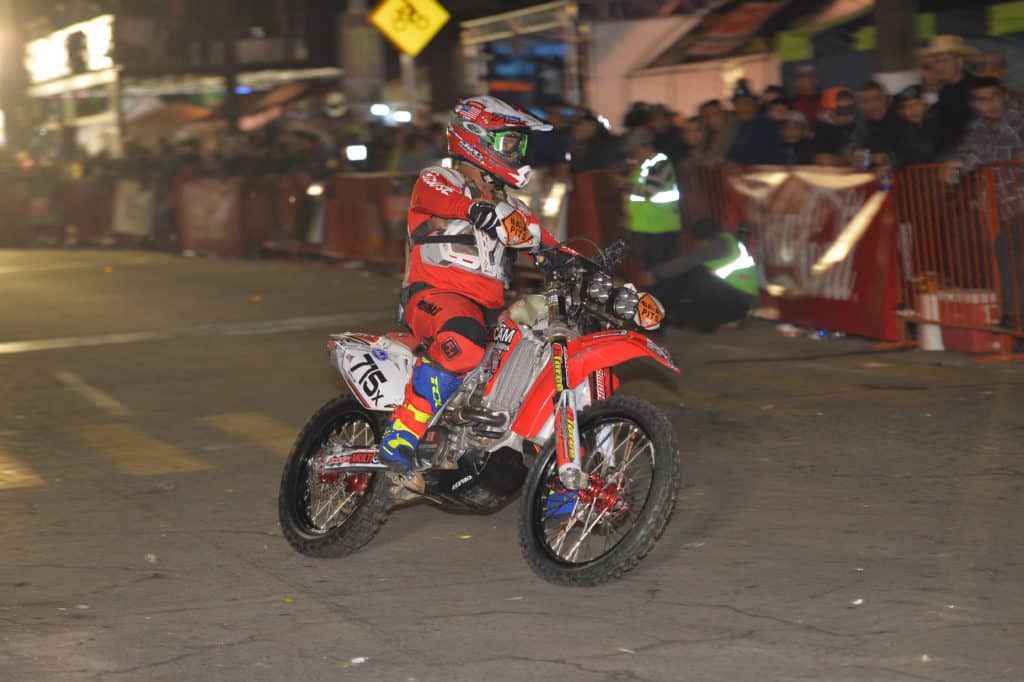 Dirt Bike Magazine’s December issue featured a story about Jeff Benrud, a 25-year Special ops soldier who had tried on three occasions to win the Ironman class in the Baja 1000.   Well Jeff went back at it again at the 50th running of the Baja 1000, which was a point to point running from Ensenada to La Paz.

Here’s the 47-year old racer (in his own words) talking about his effort this year, his bike, the pre-running and the event.

Nov. 19.   Post-race, travel straight from La Paz to North Carolina, 53 hrs. to get back home for Thanksgiving

Ported with some head work

Dunlop 606 for the first two rears, then switched to Dunlop AT 81s 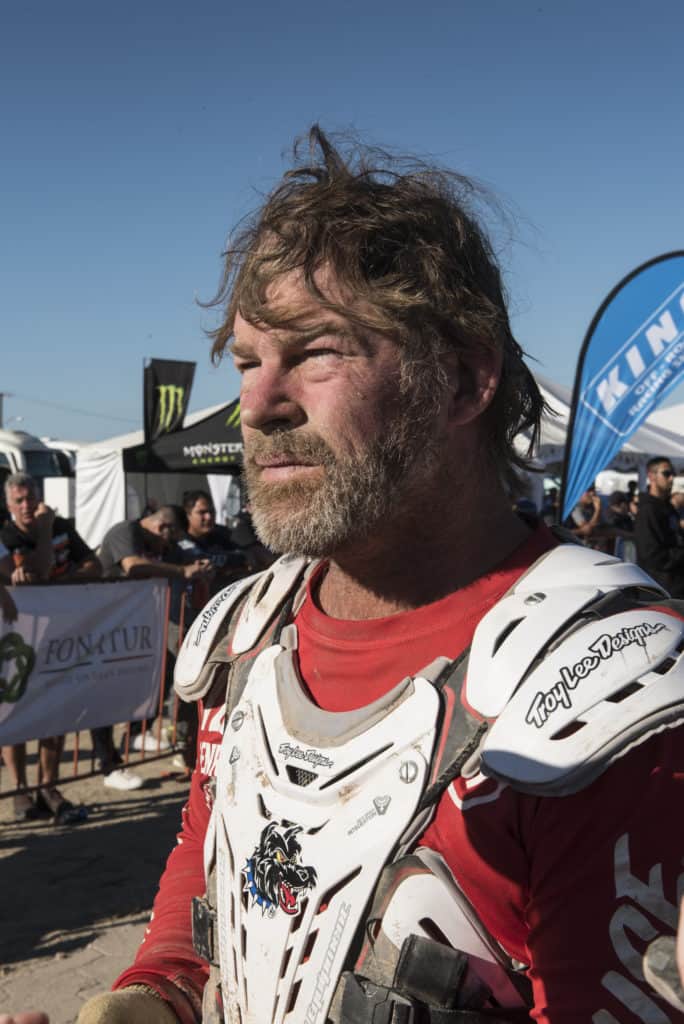 My quest to capture the Ironman victory in the 50th edition of the 2017 Score Baja 1000 began with our planned pre-running schedule. My crew chief Geno Mamone and I first had to hammer out the 40-hour drive from our home in North Carolina to Rick Johnson’s race shop in Southern California. We spent a day at Ricks prepping and drove early on the 3rd. of November to Ojos Negros where I got on the bike and set out for San Felipe, 200 miles down the peninsula. Our plan was to pre-run 200 miles a day for 5 days but unfortunately, I ended up running out of fuel and had to use my CamelBak hose to syphon fuel from a Razor. A couple of days later, around mile 835 I had a bad crash in the rocks and separated some cartilage in my sternum and badly bruised floating ribs in my lower back, but I was able to continue. I was fortunate to hook up with Ricky and his son Luke who were in a Trophy Truck pre-runner, RJ was pointing out some killer lines which definitely helped.

Our strategy was to run as hard as I could for as long as I could and hopefully put most of the Ironman field behind me early!

The Stella Tracker that SCORE has used for the past two years is awesome. It gives you tons of information such as speed zones, actual speed, time running miles etc…..takes the guess work on where the speed zones actually are (That bit me two years earlier as I finished first but was penalized due to speed zone infractions).

We used Baja Pits owner Carlos for the fuel, these guys did a great job of quickly filling the bike and attending to any other minor issues that arose, water, food, cleaning goggles etc…. They were positioned every 50-70 miles; the stops took an average of 20 seconds thanks to the quick fill system.

I had planned to take no real breaks during the race. I did plan on taking an IV at some point along the course around the 600-mile mark. I had a good Hammer gel nutrition plan that was adhered to during the race, every time I needed to fill the Camel Bak or do a tire change, I would drink a Hammer Energy drink. During road sections I had a pouch full of Hammer bars and gel packs to munch on. I took in way more calories this year and felt overall much better. Not having a head injury this year also helped. LOL….

We planned on four rear wheel/tire changes, Geno did an awesome job, quickly changing tires and making sure the Honda was good to go. This was his 4th year as our chase boss.

I started in 12th place this year and they had us depart in one-minute intervals. My big competitor- Jose Carrasco started first and he had won all of the other SCORE Ironman events this year. We battled hard, passing each other 4 times or so. I thought I was in first place, as I heard Josear had a front brake problem and then I came up on number 729X “Viking Mike” from Iceland, who had captured the Ironman championship the year before.

I pulled into San Ignacio to get an IV where I took 15 minutes and jammed 3/4 of a bag into my system. Meanwhile, Viking Mike went by. He had roughly 5 minutes on me. I suited back up and passed the Viking 15 miles down the road.

The fog hit at about mile 900, so I went without goggles until sunrise, which was around mile 1010. My eyes were full of dust and sand and burned for days later.

At mile 950-1010 we headed into the dreaded whoops, 60 relentless miles of completely gnarly whoops. I decided then and there that I was here to win this race and really needed to push. I stood for the entire 60 miles, never sitting down, praying continually for strength and I had what it took as I put over an hour on second place. I was thinking I’m going to suffer more in these whoops and if he wants to come make a move, then bring it. I was actually playing mental games in myself at this point.

I had one BIG crash in the silt beds where I thought I might have broken my leg. It was really painful, but I was still able to ride. And I had 4 of 5 more crashes in the silt, my short legs are not conducive for this stuff. Had a couple of Oh S… moments where you hit a rock you didn’t see while planted in the saddle and have a massive adrenaline dump when I nearly ate the big one. Those really suck…

I prayed a lot as I had a lot of time to spend with the Man above. I’m glad he was with me and found it was a good thing that I won…

As I entered onto the last road section coming into LaPaz, I knew that it was over. I had 5 miles of controlled 60 mph to go, I knew that I was in first place in class and I was pretty darn sure that I had no substantial penalties.

Having been up for the past 30 hours on a dirt bike, over two periods of darkness and this being the 50th anniversary of the 1000, I started to choke up…It’s kind of an emotional deal, I just remembered telling myself “You need to pull it together before you get on the podium”.

So, I did. I was greeted by my wife Helen, daughter Hailey, sister Jen, brother in law Tim and a couple more nephews, Theron, Drew, Ben and Luke. I promised my wife this would be my last Ironman attempt.

Josear and Viking Mike were both incredibly tough competitors and it feels brilliant to have won as nothing else was acceptable.