Today, a professional motocross career often starts in a rider’s pre-teen years with his family following the races that lead to the Amateur Championship at Loretta Lynn’s.  It wasn’t like that in the old days.  In this column in Dirt Bike Magazine, Roger DeCoster talked of his early years balancing his fledgling racing career with his days in the Belgian Armed Forces.

Motocross is a powerful habit. It’s tough to break, even if you want to. And who wants to? I think probably every motocrosser, fast or slow, famous or local, can tell some pretty extreme stories about the lengths he has gone to in order to go riding. You’ve probably heard of people hitch hiking, with a motorcycle, to the races. You’ve probably heard of people [riding] to the track, entering the race, and then riding home. You’ve heard of people calling in sick, and then making up stories to tell moms, wives, bosses and girlfriends. The truth is that we’ve all done questionable things in order to satisfy that urge to get on a bike and ride.
Me too. At one point in my life, it was pretty difficult. In Belgium, the law calls for everyone to serve at least one year in the Belgian armed forces. This practice is fairly common in Europe. Almost no one is excused, although if you have a very good reason, allowances can be made to either delay your service or receive a special assignment.
The year was 1964, I was 19 and actively campaigning in the Belgian National Motocross Championship. It also was my first and only year in the Belgian army. At the time that I went in, Joel Robert had already served most of his army term, and was on his way to winning his first World Championship. Every weekend, he somehow managed to get away from the army long enough to race in a different country, so I knew that it could be done. I was sure that I wasn’t going to have to stop racing altogether, but I might have to be creative in finding ways to get away.
For Joel, the road was a little easier. At the time, he was racing in the International class and had already gained some acclaim as a rising national star. I, on the other hand, was racing in the Junior class. The championship was divided between Juniors, Seniors and International riders back then, and although I was dominating the Junior class, I couldn’t count on the special treatment accorded a national hero who was working to bring a world championship home to Belgium.
The first few weekends weren’t a problem. The army allowed two weekends of leave every three months. After that, I was on my own. The early excuses involved small lies. I told them that I was the oldest of five brothers (true) and that my family relied on my race winnings to put food on the table (not so true). Officers could easily believe that story, because my pay in the army was only about one dollar a day.
When we were out in field exercises, though, that kind of excuse no longer cut it. We would be in the woods, sleeping in tents and eating disgusting food for weeks, and virtually everyone wanted out on the weekends. That required more drastic steps. Once, I remember, I actually crept into my commander’s quarters in the middle of the night to steal the stamp that was required on any pass. I waited until I heard him snoring so that I knew he was sleeping deeply, stamped my document, then snuck out to the woods where I had prearranged to have a friend waiting with a car. It was like an episode of Hogan’s Heroes.
Later, I worked to get transferred into maintenance unit where I had access to a machine shop. This was a true stroke of luck. Even though I had a Jawa sponsorship, the bikes were somewhat crude and virtually stock. In the machine shop I was able to make my own clutch hub, which was a chronic sore spot on the Jawas, and fix any part that broke. I even made my own sprockets.
I also had access to army gasoline for my racing because my commander was sympathetic. Not that he didn’t take quite a bit of gas for himself, too. At any rate, my racing that year was done almost entirely on government gas.
By then, getting out for races had become easier. I had met Paul Van Himst, who was a national soccer star and was getting out to play soccer regularly. He introduced me to Colonel Wendelon, who was on the National Olympic Committee. Wendelon turned out to be a powerful ally. He pulled all the strings necessary to get me the time I needed. He also saw to it that I could ride in the 1964 ISDT, where I got a gold medal.
That event was a story in itself. The Belgian Jawa importer had arranged for me to ride a factory Jawa, while Joel rode a CZ. So that was, in essence, my first true factory ride. That event also was where I met my first American friend, Bud Ekins. Ekins later played an important role in my first trip to America.
Those all were some very important steps in my early career, and they all happened while I was in the army. If you think that all the chips have to fall in your favor and that you have to have a factory sponsorship before you’re out of high school in order to make it in motocross, guess again. All it takes is determination. If you’ve got that, you can make things happen.
Well, it also helps to have your commander’s official stamp for your weekend pass. 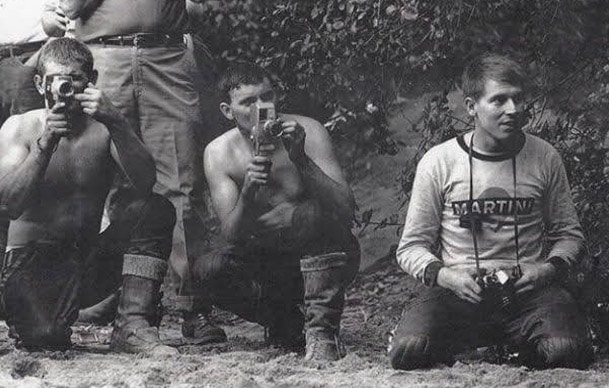